Two TU-95 aircraft, otherwise known as ‘Russian Bear’ bombers, skirted the islands of Hoshu and Hokkaido before flying back across the Sea of Japan.

The mission comes after America dispatched its own B-2 nuclear bomber over the Pacific Ocean on Saturday to show its ‘commitment’ to allies in the region.

Japanese jets were scrambled to escort two Russian TU-95 ‘Bear’ bombers as they circled the country on Monday (pictured, the route the aircraft took)

The stealth bomber, once of the most advanced aircraft ever built, took off from Whiteman Air Force Base in Missouri for a long-range training drill in the Pacific.

Japan said that neither of the Russian bombers ever entered its airspace.

This is the second time Russian bombers have flown near Japan in recent months, after three bombers and a spy plane had to be escorted back in April.

That mission came just ahead of Secretary of State Rex Tillerson’s first visit to Moscow, with one official telling Fox News it was ‘clearly meant to send a message.’

Russia’s mission also comes amid heightened tensions in the region as North Korea threatens to carry out a live test of a nuclear bomb in the Pacific Ocean. 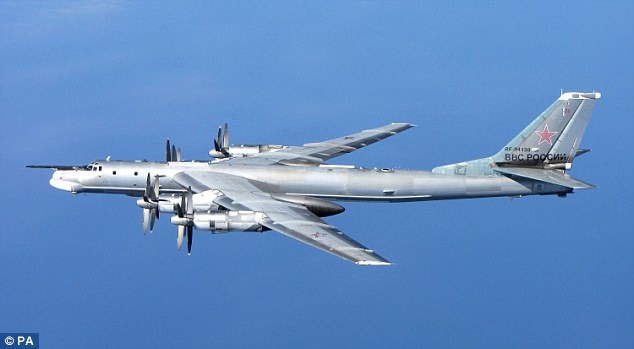 The bombers crossed the Sea of Japan, a focal point in tensions with North Korea, before circling Japan – though did not enter the country’s airspace

North Korea has already carried out dozens of missile tests so far this year, and is thought to have developed a missile capable of ranging most of the United States.

However, it is unclear whether the hermit state possesses the technology to mount a nuclear warhead to the missile or bring it back down to earth intact. A successful test in the Pacific would prove both.

The Russian bombers passed over the Sea of Japan during their mission, which has become a focal point for tensions with the North.

The hermit kingdom uses the sea as a landing site for most of its test missiles, while President Trump has stationed nuclear submarines and warships in the region.