Officials in Tottori prefecture say there has been a rise in foreigners writing messages in the 50ft-high dunes which are part of Saninkaigan National Park and are the only ones of their kind in Japan.

In January a foreign couple were forced to clean up a message which said ‘Happy Birthday Natalie’ in 16ft-high letters on one of the tallest dunes.

Officials in Tottori prefecture are warning tourists not to write in the sand dunes, after a foreign couple were forced to clear away a message that said ‘Happy Birthday Natalie’ in January

Another message was found in April which read ‘SEBASTiAN’ with a face next to it.

Defacing the dunes was banned ten years ago – along with littering and setting off fireworks – but officials believe foreigners are not aware of the rules.

They have announced plans to invest in more foreign-language signs warning visitors against writing in the sand.

The signs will be in English, Korean and Chinese and posted at the park’s five entrances.

But other options including more foreign-language training for staff so they can explain the rules once visitors are inside.

Since the graffiti law was first passed in 2008, there have been 3,334 incidents in total – but more than 500 of those have come in the last two years as Japan becomes more popular with overseas tourists. 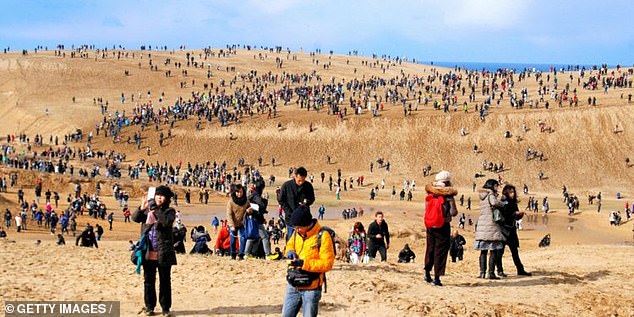 The dunes attract more than 2million tourists each year, at least half of whom are foreign, and is popular with Instagram users (file image)

The ever-changing appearance of the dunes has also drawn Instagram users looking for unique images of their travels, authorities believe.

Around two million people are thought to visit the dunes every year, with around 50 per cent coming from overseas – compared to just 20 per cent a decade ago.

The Tottori Sand Dunes were created by silt washed down from nearby mountains into the sea and then carried ashore by currents.

They have existed for more than 100,000 years but have been shrinking thanks to a government reforestation programme that slowed erosion on the mountain.

Barriers built to protect against tsunamis have also disrupted currents responsible for carrying the silt to shore.