From their position on the International Space Station (ISS), astronauts are treated to a unique view of our planet that most people will never have the chance to see.

The ISS orbits Earth at a height of around 250 miles, meaning the space station makes around 16 trips around Earth every single day.

Now, Yusaku Maezawa, a Japanese billionaire who is currently aboard the ISS, has shared a stunning timelapse video of Earth from the space station.

Maezawa posted the video on Twitter, describing the view as ‘breathtaking.’

‘Took a time lapse of Earth from the ISS window,’ he wrote. ‘This is exactly an entire orbit around Earth. Breathtaking.’

ROCK DRUMMER TO BILLIONAIRE: WHO IS YUSAKU MAEZAWA?

Before he became a billionaire fashion entrepreneur, Yusaku Maezawa was an indie rock band member who decided to skip college ‘after seeing all the tired faces on my morning commutes’ in Japan.

Born in 1975 in Chiba prefecture in Japan, Maezawa graduated from the prestigious Waseda Jitugyo High School in 1991.

It was there that he started SWITCH STYLE, an indie rock band which eventually released an EP in 1995.

After graduating, he followed his then-girlfriend to the United States, where he collected CDs and records of musicians he loved.

In 1995, he returned to Japan and started an import CD and record mail-order business.

His business succeeded, and he began to branch out.

In 2000, he created an online retail business. That same year, his band signed with BMG Japan and debuted an album.

In 2004, Start Today began Zozotown, the site made a killing selling clothes from shops such as Japanese boutique United Arrows and minimal French label A.P.C.

Zozotown’s success turned its founder, Maezawa, into one of Japan’s richest entrepreneurs, and its name adorns a baseball stadium.

The website set itself apart in its early days with a clean, uncluttered design and a slice of ‘Ura-Hara’ style – the modish fashion of the backstreets that line the trend-setting Harajuku district of Tokyo.

Business took off as fashion-conscious professionals in their late twenties and early thirties started using Zozotown to buy trendy but work-appropriate threads online from labels such as United Arrows and Nano Universe.

Its target is now broader, selling over 6,800 brands including clothes by Shimamura Co Ltd, one of Japan’s largest mass market chains. But industry executives say it still has an enviable cachet.

It continued to grow until 2007, when it went public and was listed in Tokyo Mothers Market.

In recent years, Maezawa has used his wealth to buy famous and pricey works of art.

A year later, he shelled out a whopping $110.5million at auction in Sotheby’s for another Basquiat piece – this one titled Untitled.

He’s also bought works by Christopher Wool, one of which he paid $13.9million, as well as Richard Prince.

He also paid $6.9million for ‘Lobster’, by Jeff Koons.

Maezawa’s dream is to buy up works of art and display them in his own private museum in his hometown of Chiba prefecture.

While Maezawa’s video is just 24 seconds long, it shows the space station completing an entire orbit around our planet.

A stunning sunrise can be seen at the beginning of the clip, before Earth quickly passes by below, while the ISS’s solar panels twist and adjust their position in the forefront.

The video ends with a beautiful sunset, marking a full orbit of the planet.

Since arriving at the ISS on December 8, Maezawa has kept his 10.8 million Twitter followers updated on his mission.

So far, the billionaire has posted a video explaining how he uses the toilet on the ISS, as well as various photos from the station – including one of him meditating in zero gravity.

Maezawa blasted off to the ISS last week from the Baikonur cosmodrome in Kazakhstan, accompanied by his assistant and film producer Yozo Hirano.

The pair are spending 12 days aboard the giant orbiting laboratory, where they plan to answer questions such as ‘Do you move forward when you fart in space?’ and ‘What happens when you play Pokémon GO in space?’

Maezawa and Hirano spent the past few months training at Star City, where they learned how to behave in zero-gravity and specific protocols in the event of an emergency.

Maezawa said that training in the spinning chair ‘almost feels like torture’.

‘It’s the hardest training ever done,’ he tweeted in late November.

The cost of the trip is unclear, as the price tag has been kept a secret, although previous customers reportedly paid $20 million to $40 million for flights to the ISS.

But this is unlikely to make much of a dent in the $1.9 billion net worth Maezawa is estimated to have accumulated through his firm Zozo, previously known as Start Today, which operates Japan’s largest online fashion mall ZOZOTOWN.

Despite being the country’s 30th-richest person, the 46-year-old tycoon is far from the traditional image of a staid Japanese businessman.

Maezawa made headlines in 2019 when he launched a search for a female companion to accompany him during a trip around the moon on a SpaceX spacecraft, scheduled to launch in 2023.

But his request was not met, so he changed it to a search for eight artists, asking them to create ‘masterpieces (that) will inspire the dreamer within all of us’.

In March, he announced he was broadening the search beyond artists, and claims to have received one million applications for eight spots on the rocket made by Elon Musk’s firm.

If SpaceX can pull the trip off, Maezawa and his band of astronauts will become the first lunar voyagers since the last US Apollo mission in 1972.

His Twitter account – its handle a play on his first name: @yousuck2020 – has more than 10 million followers.

Ahead of his trip, Maezawa solicited ideas for things he should do in space from his followers.

The billionaire said it didn’t matter whether the ideas were ‘silly or serious’, he just wanted to give people the chance to participate in his space tourism journey.

Maezawa’s launch comes at a challenging time for Russia, as its space industry struggles to remain relevant and keep up with Western competitors in the modern space race.

Last year, US billionaire Elon Musk’s company SpaceX ended Russia’s monopoly on manned flights to the ISS after it delivered astronauts to the orbiting laboratory in its Crew Dragon capsule. 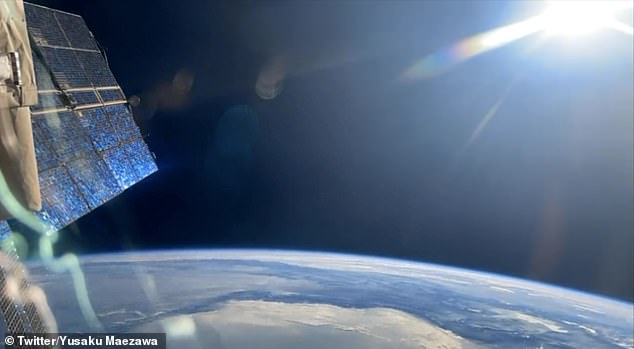 While Maezawa’s video is just 24 seconds long, it shows the space station completing an entire orbit around our planet 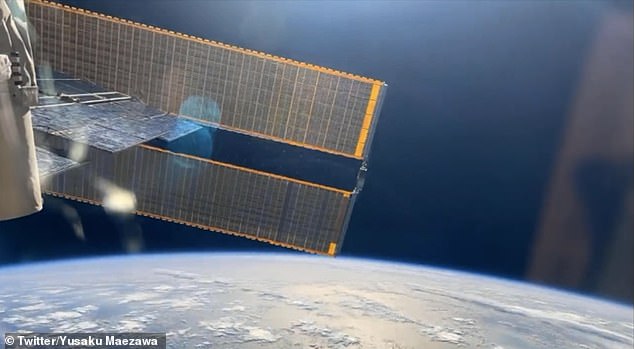 A stunning sunrise can be seen at the beginning of the clip, before Earth quickly passes by below, while the ISS’s solar panels twist and adjust their position in the forefront

This, however, also freed up seats on Russia’s Soyuz rockets that were previously purchased by NASA, allowing Moscow to accept fee-paying tourists.

So far Russia has sent seven self-funded tourists to space in partnership with the US-based company Space Adventures. Maezawa plans to be the 8th and the first from Japan.

And in October, the Russian space agency Roscosmos sent actress Yulia Peresild and director Klim Shipenko to the ISS to film scenes for the first movie in orbit in an effort to beat a rival Hollywood project.

But elsewhere in the world, this has also been a milestone year for amateur space travel. 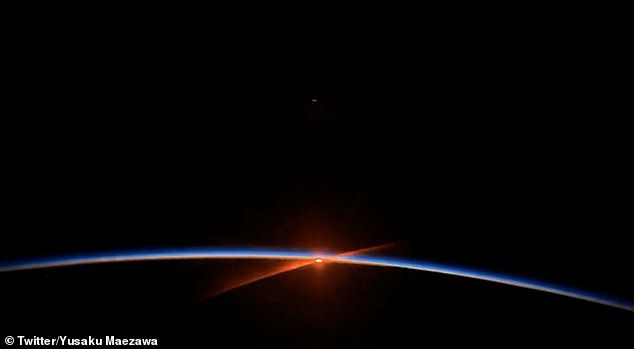 The video shot from the International Space Station ends with a beautiful sunset, marking a full orbit of the planet 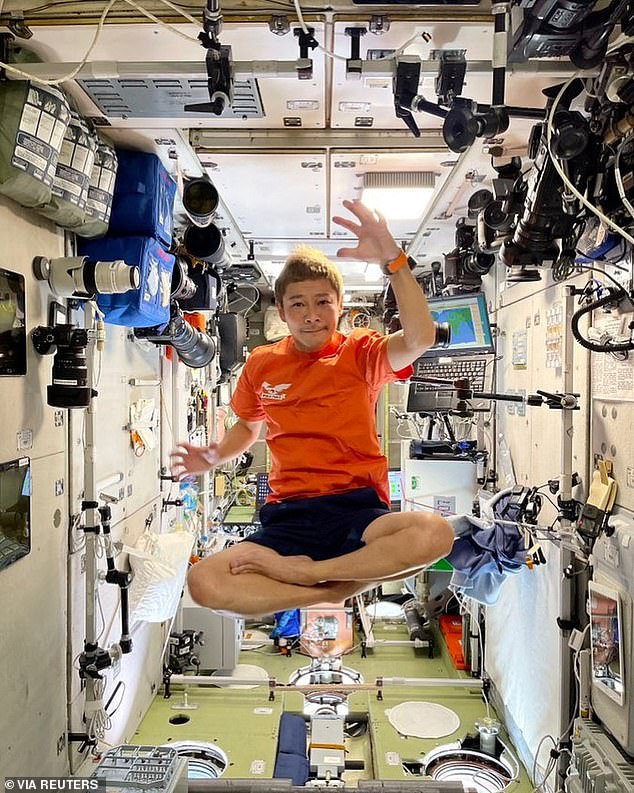 So far, the billionaire has posted a video explaining how he uses the toilet on the ISS, as well as various photos from the station – including one of him meditating in zero gravity (pictured)

In July, billionaire Richard Branson travelled aboard his Virgin Galactic spacecraft, experiencing a few minutes of weightlessness before coming back to Earth.

Meanwhile, in September, SpaceX operated a historic flight taking the first all-civilian crew on a three-day journey around the Earth’s orbit in a mission called Inspiration4.

Those journeys mark the beginning of space opening up for non-professionals with more launches announced for the future.

In 2023, SpaceX is planning to take eight amateur astronauts around the moon in a spaceflight that is bankrolled by Maezawa, who will also be onboard.

Russia has said it will take more tourists to the ISS on future Soyuz launches and also plans to offer one of them a spacewalk.