Japan’s new emperor Naruhito donned a traditional robe and huge headdress to perform prayers, days after ascending to the throne.

He performed a Shinto ritual at the palace to report to imperial family gods the plans for the main ceremonies of his succession later this year.

Naruhito ascended to the Chrysanthemum Throne on May 1, the day after his father Akihito abdicated.

Wearing a headdress and a dark orange ‘ancient’ outfit, Naruhito prayed at the Kashikodokoro shrine, followed by palace officials who carried the imperial regalia of a sacred sword and jewel he inherited from his father.

The 59-year-old emperor later prayed at two other main palace shrines wearing a robe based on the ninth century design called a ‘Korozen no goho’.

On the day of his abdication eight days ago, Akihito wore the same robe in a ritual to show his intention to step down to the sun goddess, Amaterasu. 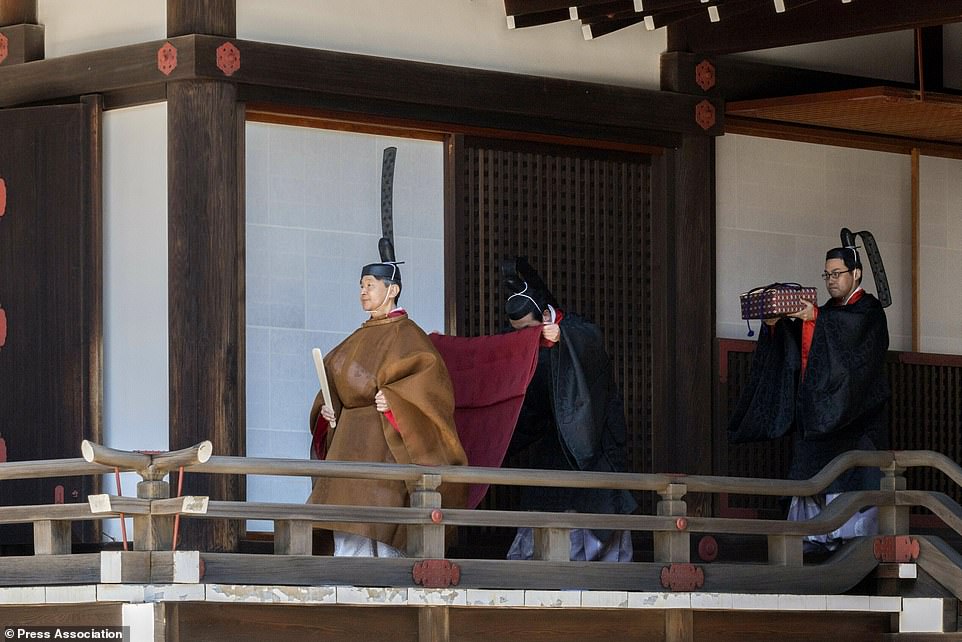 Emperor Naruhito wearing a robe based on a ninth century design, followed by aid who carried a sacred sword and jewel he inherited from his father 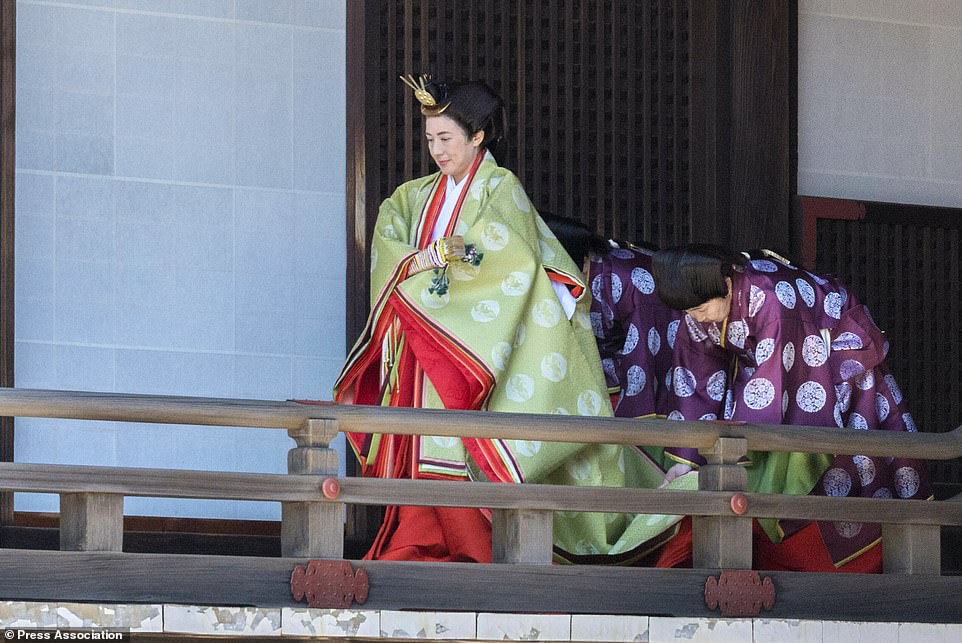 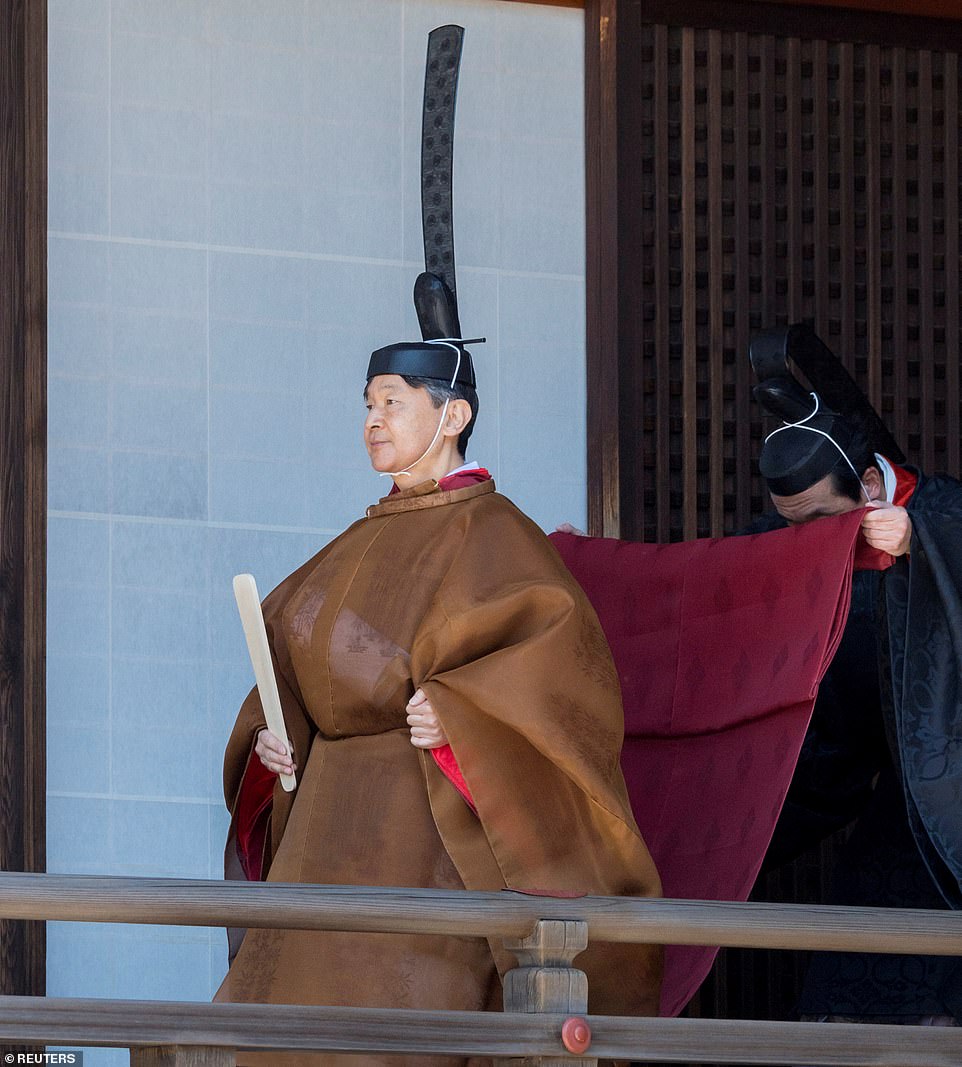 Japan’s new emperor Naruhito taking part in a ritual called Kashikodokoro-ni-Kijitsu-Hokoku-no-gi today, a ceremony for the emperor to report the dates of the Great Thanksgiving Ceremony at the Imperial Palace in Tokyo

Naruhito’s aides carried a sword and a jewel inherited from his father as proof of his ascension, following the 85-year-old renouncing the throne.

These ‘treasures’ include a mirror, a sword and a gem – known as the Imperial Treasures or Regalia – and are said to come directly from the sun goddess Amaterasu, who passed them down to her great grandson and the first emperor of Japan, Emperor Jimmu.

The enthronement ceremony, which sees priests present these objects to the new emperor, goes back to 690 and is always held in private with only the priests and the emperor seeing the items.

No known drawings or photographs of the treasures exists, only speculative mark-ups based on historical accounts.

Enshrined at the Kashikodokoro shrine is Amaterasu, the mythological ancestress of Japan’s emperors.

Although the ceremony goes back more than 1,300 years, the current palace was only used for the enthronement of the last three emperors as the capital of Japan used to be Kyoto and the imperial palace was moved to Tokyo in 1869.

In ancient times when the head of a household died his house was burned and before the founding of Kyoto, whenever an emperor died his entire capital city was burned as a rite of purification.

A main ascension ceremony is planned in October, when thousands of guests from Japan and overseas will be invited, followed by a religious harvest rite in November. 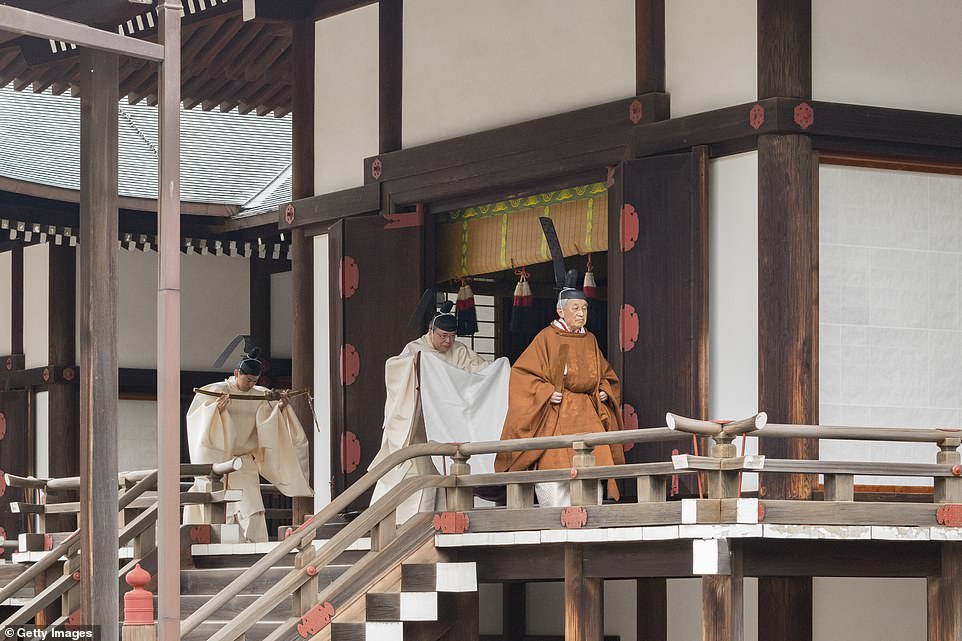 Japan’s Emperor Akihito began the process of abdicating on the morning of April 30 at the Imperial Palace in central Tokyo, taking part in a series of private ceremonies wearing an ancient robe 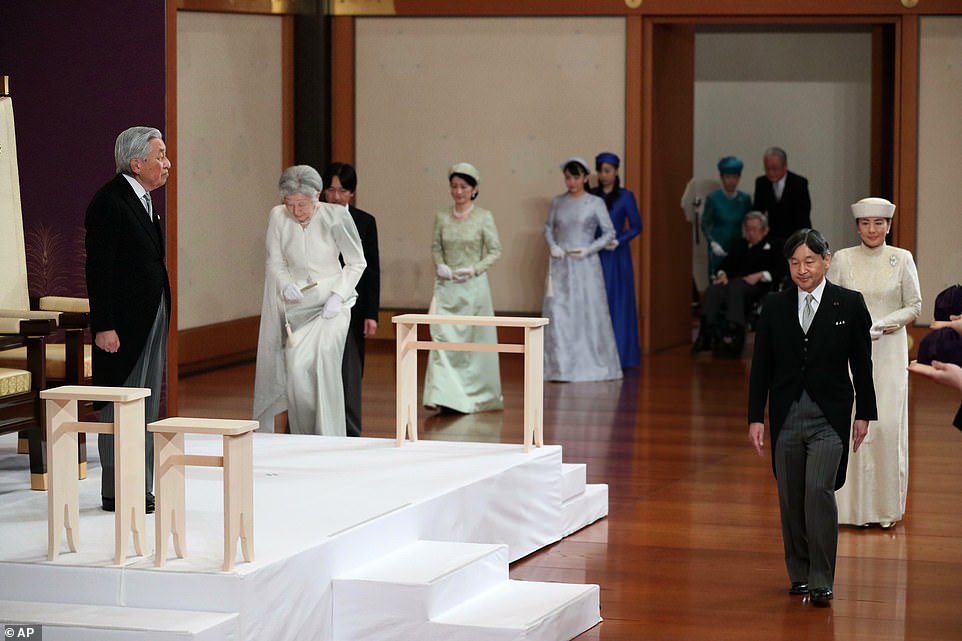 The harvest rite is funded by the government, which some experts say could violate the constitutional separation of state and religion.

The new 59-year-old emperor is a historian who studied at Oxford. He is Japan’s first emperor born after the Second World War and the first who has studied overseas.

In a statement on his succession, Naruhito pledged to emulate his father in seeking peace and staying close to the people.

Empress Masako also prayed at the three shrines after Naruhito on Wednesday for the first time since 2002, after which she had largely receded from public appearances due to stress-induced mental conditions.

Akihito become the country’s first ruler in 200 years to step down from the role when he handed the reigns over to his some.

His rule officially ended at midnight on April 30 when his eldest son, then-Crown Prince Naruhito, ascended to the throne. The process will be officially recognised with a ceremony on Wednesday morning.

The move spelt the end of the Heisei imperial era and the start of the Reiwa era – meaning beautiful harmony – which will last until the end of Naruhito’s reign.

Akihito said his age and ill health – he has been treated for prostate cancer and has undergone heart surgery – made him fearful that he would not be able to carry out his duties.

There have been abdications in Japan’s long imperial history, which has mythological origins and stretches back more than two millennia, but the last one was more than two centuries ago.

Akihito was the first monarch to take the throne under a post-war constitution that defines the emperor as a symbol of the people without political power.

He has sought to modernise Japan’s imperial family, which has a sensitive position given the role his father Hirohito played in the country’s militaristic past.

The 85-year-old and his wife Empress Michiko won plaudits for a popular touch, notably comforting people affected by the 2011 earthquake, tsunami and nuclear meltdown that devastated whole swathes of east Japan and killed thousands.

His father, Hirohito, in whose name Japanese troops fought World War Two, was considered a living deity until after Japan’s defeat in 1945, when he renounced his divinity.

What are Japan’s three ‘Imperial Treasures’? 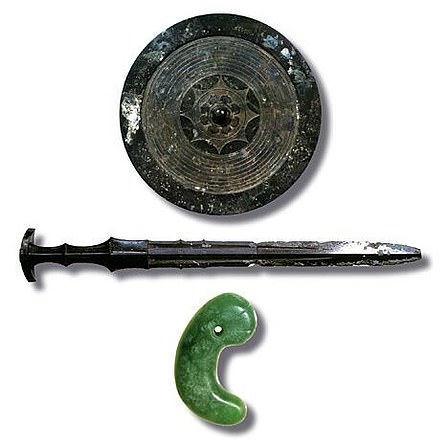 Representation of Japan’s three Imperial Treasures – the mirror (top), the sword (middle) and the jewel (bottom)

The abdication ceremony of Emperor Akihito and the accession ceremony of his son Naruhito will both feature a mirror, a sword and a gem – known as the Imperial Treasures or Regalia.

The items are sacred and represent the three primary virtues: valor (the sword), wisdom (the mirror), and benevolence (the jewel). They are also a symbol of imperial power – as Japan has no imperial crown.

They are said to date back more than a millennium, having been bequeathed to the imperial line by the Sun goddess Amaterasu – the most sacred of all Shinto deities in Japanese mythology.

Japanese emperors were once believed to be direct descendants of Amaterasu, who is enshrined at the Ise Jingu shrine and who sits at the top of ‘yaoyorozu’, or the eight million gods of all things in Shinto.

Using the three treasures during the abdication and accession rituals is believed to maintain a spiritual connection between Japan’s past and present, as well as with the spirits which intervene in human lives.

But the treasures are so sacred they are always kept hidden in boxes and even the emperor has never seen them.

They are so crucial to the royal family that Naruhito’s grandfather, Emperor Hirohito, said that protecting them was a factor in his decision to surrender in World War Two.

‘If the enemy had landed near the Bay of Ise, both the Ise Grand Shrine and Atsuta Shrine would have been put under enemy control immediately, without any chance of us moving the sacred treasures away,’ Hirohito was quoted as saying.

Yata no Kagami – the sacred mirror

The mirror is probably made of bronze, with intricate designs engraved on one side, and bigger than typical ancient mirrors excavated, which are 20-30 cm (8-12 inches) in diameter, said Naoya Kase, an associate professor at Kokugakuin University.

It is perhaps the most sacred of the three treasures

Kusanagi no Tsurugi – the sacred sword

It is kept at Atsuta Shrine, believed to have been opened under Emperor Keikō (71-130) in Japan’s central Aichi prefecture

The sword was probably not ornamental, but a practical weapon with an iron blade, Mr Kase said. Accoring to legend it was obtained from the body of an eight-headed serpent by Susanoo-no-Mikoto, the Shinto god of the sea

It was rumoured to have been lost at sea during a 12th Century battle, but some say the lost sword was a duplicate

Yasakani no Magatama – the sacred jewel

This curved bead made of green jade represents benevolence

The jewel probably comprises of a number of comma-shaped beads used as accessories and ceremonial objects in ancient times, likely red in colour, Mr Kase said. It may be the only surviving ‘original’ treasure

Ancient records refer to one emperor who tried to open the box containing the jewel. White smoke came out and the terrified emperor ordered his aide to close it