Japanese girl suing government for forcing her to dye hair

A Japanese teenager is suing the Osaka government after claiming she was repeatedly forced to dye her naturally-brown hair black.

The 18-year-old schoolgirl alleges she was threatened with being banned from attending school if she did not comply, local media reported.

In a lawsuit filed in Osaka District Court, the 18-year-old girl said her mother told Kaifukan School in Habikino city upon her enrolment she was born with brownish hair, as the school had a policy banning hair colouring.

A Japanese teenager in Habikino city is suing the Osaka government after claiming she was repeatedly forced to dye her naturally-brown hair black, following an unfair school policy (pictured: Kaifukan School in Habikino city

Educators, however, instructed her to colour her hair black, telling her repeatedly that the dye job was insufficient and forcing her to ‘either dye the hair black or quit school’, Kyodo news reported, citing the lawsuit.

The girl has not attended school since September 2016, suffered pain and irritation from the hair dye, and is seeking damages of about 2.2 million yen (nearly £15,000).

Osaka prefecture is asking the court to reject the claim.

Masahiko Takahashi, head of Kaifukan School, said he could not comment directly on the case, but noted the school’s policy prohibiting students from dyeing or bleaching hair. 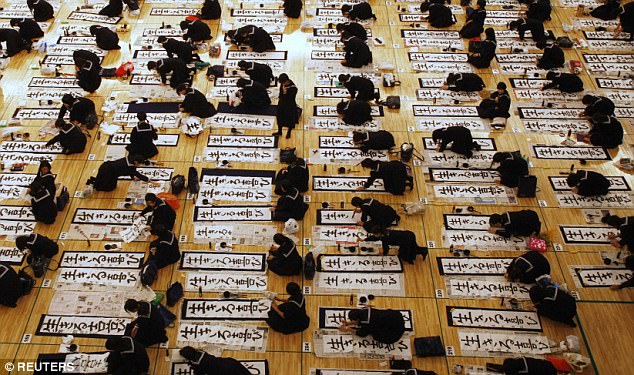 The 18-year-old schoolgirl, suing for 2.2 million yen (nearly £15,000) alleges that she was threatened with being banned from attending school if she did not comply, local media reported (stock image)

He declined to say whether it was permissible to dye brown hair to black.

In Japan, where conformity is the cultural norm, many schools have strict rules about hair colour, accessories, make-up and uniforms, including the length of skirts for girls.