Former Japanese Prime Minister Yasuhiro Nakasone, a giant of his country’s post-World War II politics who pushed for a more assertive Japan while strengthening military ties with the United States, has died.

The office of his son, Hirofumi Nakasone, confirmed that Nakasone died Friday at a Tokyo hospital where he was recently treated. He was 101 years old.

As a World War II navy officer, Yasuhiro Nakasone witnessed the depths of his country’s utter defeat and devastation. Four decades later, he presided over Japan in the 1980s at the pinnacle of its economic success.

In recent years, he lobbied for revision of the war-renouncing U.S.-drafted constitution, a longtime cause that no postwar leader has achieved to date.

Nakasone began his political career as a fiery nationalist denouncing the U.S. occupation that lasted from 1945 to 1952, but by the 1980s he was a stalwart ally of America known for his warm relations with President Ronald Reagan.

He boosted defense spending, tried to revise Japan’s U.S.-drafted pacifist constitution and drew criticism for his unabashed appeals to patriotism.

Former Japanese Prime Minister Yasuhiro Nakasone died in Tokyo on Friday, aged 101. He was a stalwart ally of America, known for his warm relations with Ronald Reagan 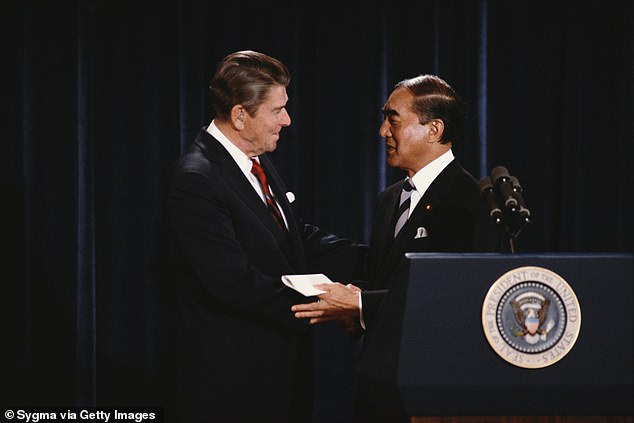 President Ronald Reagan, on a visit to Japan, is welcomed by Prime Minister Yasuhiro Nakason in the early 1980s 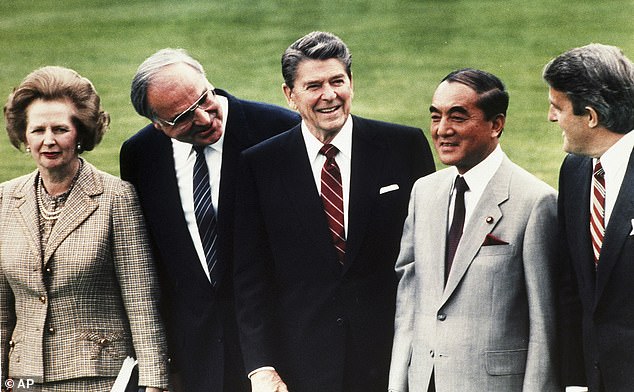 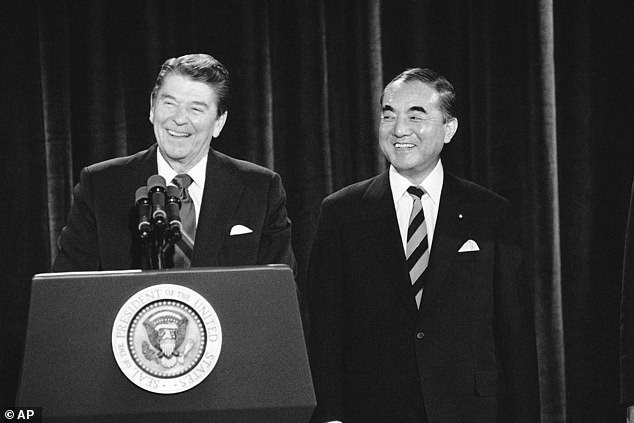 In the 1950s, he was a driving force behind building nuclear reactors in resource-poor Japan, a move that helped propel Japan’s strong economic growth after World War II but drew renewed scrutiny in the aftermath of the meltdowns at a nuclear plant in Fukushima swamped by a tsunami in 2011.

The son of a lumber merchant, Nakasone was born May 27, 1918, the last year of World War I. He went to Tokyo Imperial University before entering the Interior Ministry and then the navy, where he rose to the rank of lieutenant commander during World War II.

In his last news conference as prime minister, he said his political ambitions were sparked after the war by ‘the conviction I felt as I gazed bewildered at the burned ruins of Tokyo.’

‘How can this country be revived into a happy and flourishing state?’ he said.

He established his nationalist credentials by campaigning for parliament riding a white bicycle bearing the ‘rising sun,’ or the ‘Hinomaru’ national flag, which Japan´s wartime military had used. He won a seat in 1947, becoming the youngest member of parliament at age 28. 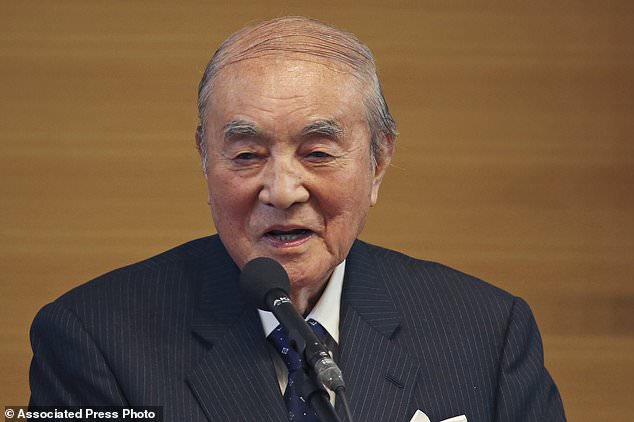 In this May 2015 photo, Yasuhiro Nakasone delivers a speech during the annual meeting on Japan’s constitution reform in Tokyo 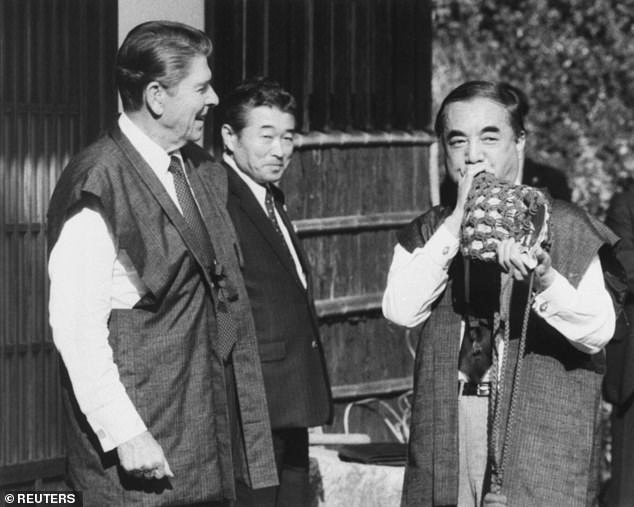 Yasuhiro Nakasone blows a trumpet shell next to U.S. President Ronald Reagan at Hinode-sanso or Hinode mountain villa during their summit meeting in Hinode Town on November 11, 1983 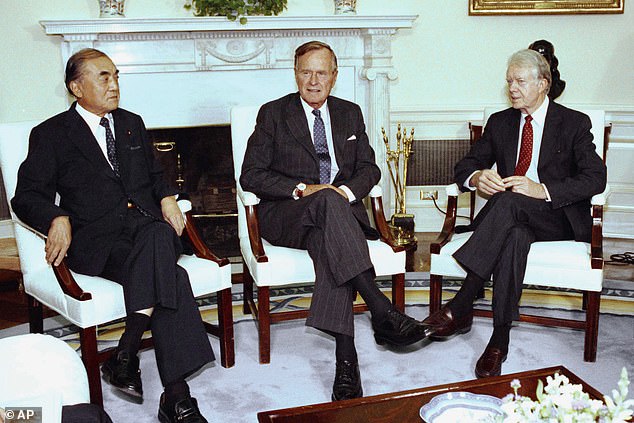 He was a key figure behind crafting and ramming through government funding for nuclear research in 1954, less than a decade after the U.S. dropped atomic bombs on Hiroshima and Nagasaki, killing 200,000 people in the last days of the war. In 1955, he helped pass legislation designed to promote nuclear power.

‘Atomic power used to be a beast, but now it’s cattle,’ he told a parliamentary session in 1954.

In a 2006 speech marking the 50th anniversary of Japan’s first nuclear institute in Tokaimura, Nakasone said he was intrigued by nuclear power as he tried to figure out why Japan lost the war.

After the Fukushima disaster in 2011, there was a public backlash against nuclear energy, but Nakasone said it remained indispensable to maintain Japan’s industrial growth.

As prime minister from 1982 to 1987, Nakasone broke the mold of the Japanese politician. His outspokenness appealed to voters, and he was praised for putting a human face on Japanese politics.

His tongue sometimes got him in trouble. He sparked outrage in 1986 by suggesting Japan was an economic success because it didn’t have minorities with lower intellectual levels.

He was the first Japanese prime minister to visit South Korea, a country with bitter memories of its 1910-1945 colonization by Japan. That was his first trip abroad as leader, a break from his predecessors, who made Washington their first stop.

Despite that gesture, Nakasone was staunchly committed to Japan’s alliance with the U.S., and his warm friendship with Reagan was known as ‘Ron-Yasu’ diplomacy.

His premiership coincided with a period of major trade disputes with the West. Responding to U.S. complaints that Japanese markets were closed, Nakasone initiated packages to reduce tariffs and other import barriers, including a long-term plan to shift Japan’s export-dependent economy to focus more on domestic growth.

Nakasone´s nationalist legacy includes the first official visit in 1985 by a postwar prime minister to Yasukuni Shrine, which honors the war dead, including Japan´s convicted war criminals. His visit fueled disputes with china and South Korea over World War II history that persist to this day.

‘Japanese cowered under the (postwar U.S.) occupation and occupation policies,’ Nakasone said just before stepping down as prime minister in 1987. ‘It is important to revive from that cowered spirit – that is healthy nationalism.’

But Nakasone also said Japan should remain a war-renouncing nation.

‘We must stick to our commitment as a pacifist nation. We have caused tremendous trouble to our neighboring countries in the past war,’ Nakasone said in a 2011 interview with public broadcaster NHK. ‘Our commitment to peace must be the centerpiece of Japan’s domestic and diplomatic policies.’

Both nationalist and wrestling with the same issues – stronger military, constitutional revision and trade friction with the U.S. – Prime Minister Shinzo Abe has been compared to Nakasone by some Japanese media and analysts. But the Japan that Abe leads today is no longer at its peak and China is now a rival to the U.S., and Abe is seen more hawkish toward Beijing´s aspirations.

In later life, Nakasone became one of Japan’s leading elder statesmen. He promoted his longtime dream of revising the U.S.-drafted constitution and pronouncing his views on national and international affairs. He had attended an annual May rally campaigning for a constitutional revision until he skipped one just before turning 100, when he had a hand injury and couldn´t use his cane to rise from his wheelchair.

He retired from parliament in 2003, at age 85, when he was pushed to retire from parliament after then-Prime Minister Junichiro Koizumi urged him to step aside in upcoming elections to make way for a younger lawmaker.

Nakasone complied, but he accused Koizumi of discrimination and lack of respect for his elders. He publicly read a haiku poem. In his 100th birthday message, Nakasone said that he was not done yet, and that same haiku still best described his spirit:

While it still has life.

Nakasone is survived by his son Hirofumi – a parliamentarian – two daughters, and three grandchildren.