Japan’s Mount Aso has erupted, flinging a column of hot gas, ash and rocks into the sky and sending hikers fleeing away from the popular tourist spot.

The volcano, located on the southern island of Kyushu, erupted at 11.43am Wednesday while dozens of tour buses and cars were parked at the site.

There were no immediate reports of casualties, but rescue teams say they are still trying to work out whether any hikers got trapped by torrents of ash which ran down the sides of the volcano.

Plumes of ash and smoke rose 11,500ft into the sky after the eruption, in scenes captured by nearby CCTV cameras and on tourist’s phones.

Mount Aso, on the southern Japanese island of Kyushu, erupted at 11.43am local time – sending a plume of ash 11,500ft into the sky 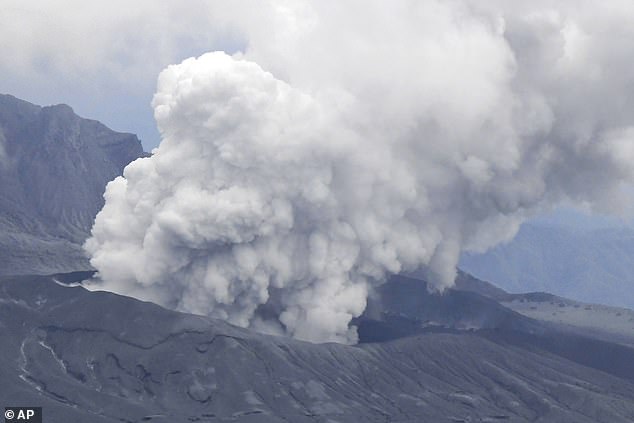 Aso is a popular tourist spot and dozens of cars and tour buses were parked nearby at the time, though no injuries were immediately reported

‘Human lives are our priority and we are working with the Self Defence Forces, police and firefighters to effectively deal with the situation,’ Chief Cabinet Secretary Hirokazu Matsuno told reporters.

For those near the mountain, ‘caution must be exercised for large flying rocks and flows of pyroclastic materials’, said Japan’s Meteorological Agency.

‘Caution is warranted even in far-away areas downwind, as the wind may carry not just ash but also pebbles,’ agency official Tomoaki Ozaki told a televised press conference, warning that toxic gases may also have been emitted.

Mount Aso is one of the world’s largest and most-active volcanos, consisting of multiple vents and hot springs located inside a wide crater.

The volcano has five peaks, the tallest of which rises 5,200ft above sea level.

The last major eruption occurred in 2016, when the volcano shot ash seven miles into the sky before it fell back down and blanketed several nearby prefectures.

Despite its frequent activity, parts of Mount Aso are used for cattle grazing and it is a popular tourist draw. 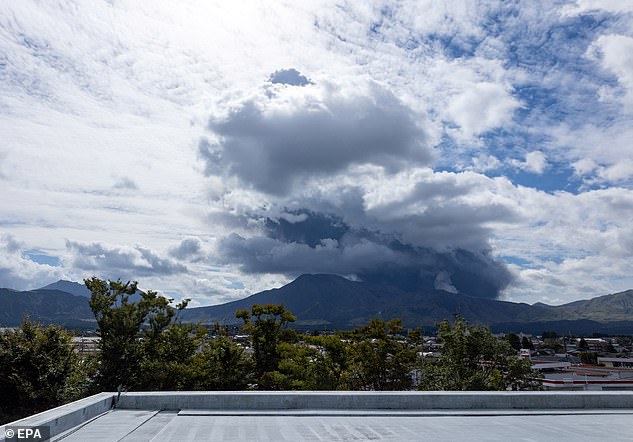 Aso is one of the world’s largest and most-active volcanos, frequently venting small ash clouds. The last major eruption was in 2016 (pictured, today’s eruption) 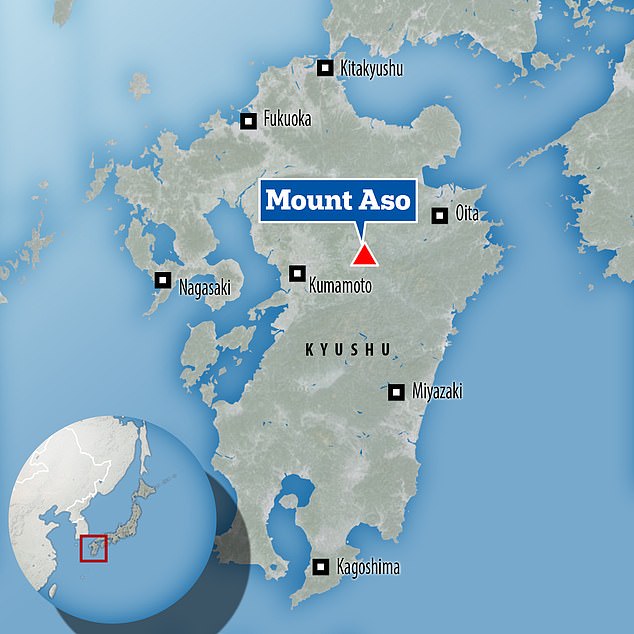 Mount Aso is made up of five peaks located on the southern Japanese island of Kyushu, the tallest of which rises 5,200ft above sea level

There is a museum located around two miles from the main crater, which has a large car park which many tour companies and hikers use to visit the crater.

While tourists are sometimes able to trek to the crater, access is frequently restricted due to increased volcanic activity.

Trails leading to the crater were closed on Thursday last week after a small eruption, with a half-mile exclusion zone established around it.

The threat level was increased again following Wednesday’s eruption to three out of five, its highest level since the 2016 blast.

Japan is one of the world’s most volcanically active countries.

It sits on the so-called Pacific ‘Ring of Fire’ where a large proportion of the planet’s quakes and volcanic eruptions are recorded.