JARV IS… album review: Each track in Beyond The Pale is an event

The writing is strong enough to tackle subjects that usually make us cringe: Each track in Beyond The Pale by JARV IS… is an event

An act called JARV IS… who could that possibly be? At a time when millions of people are facing up to wearing masks, Jarvis Cocker has opted for something fairly transparent.

This may be a relief to his record company, as his name has pulling power. More than a singer, he’s in demand as a radio presenter, publisher and reader of bedtime stories. Clever, playful, middle-aged but still studenty, he’s like a funky Stephen Fry.

The slight change of name comes about because this album emerged from live performance, with Cocker’s touring band co-writing the music. The lyrics are written by Jarvis alone, which is just as it should be. 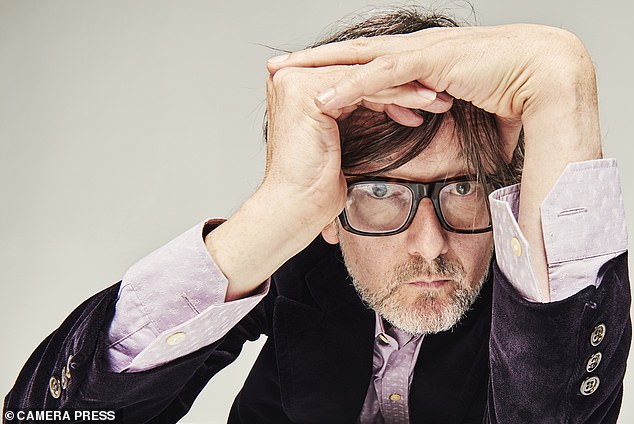 The slight change of name comes about because this album emerged from live performance, with Jarvis Cocker’s (above) touring band co-writing the music

His wit has been giving pleasure since Britpop began, 25 years ago. If Blur’s Damon Albarn turned out to be the most creative musician from that crop, Pulp’s Jarvis was the star lyricist.

He came from Sheffield and slotted into the great Yorkshire tradition of Alan Bennett and Simon Armitage – erudite yet earthy, cuddly then suddenly caustic.

Beyond The Pale has only seven tracks, but each one is an event. Save The Whale is a loving homage to Leonard Cohen, mixing dark thoughts and dirty grooves. Must I Evolve?, inspired by the cave art at Creswell Crags near Chesterfield, is a meditation on caves and raves that covers half of human history.

House Music All Night Long is an anthem about missing a lover which, in the sad light of lockdown, becomes an elegy for our social life. Swanky Modes is a lascivious love story, like Ian Dury with a twist of Serge Gainsbourg.

The writing is strong enough to tackle subjects that usually make us cringe. If pop had a Bad Sex Award there would be dozens of contenders. If it had a Good Sex Award, Jarvis would win hands down.