Jason Bateman has apologized for appearing to defend Jeffrey Tambor as their Arrested Development co-star cried about being harassed by him on set.

The hit comedy’s cast had sat down for a group interview with the New York Times when they were asked about Tambor’s own admission that he had ‘blown up’ at Jessica Walters.

Walters, 77, broke down in tears as she said that in ‘almost 60 years of working, I’ve never had anybody yell at me like that on a set.’ But while she said it was ‘hard to deal with’, he’d apologized and she had to ‘let go of being angry at him.’ 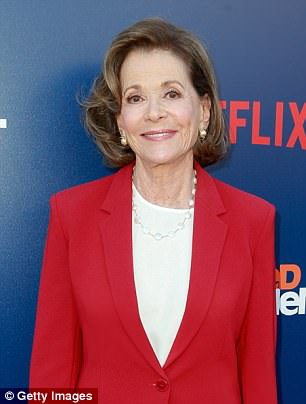 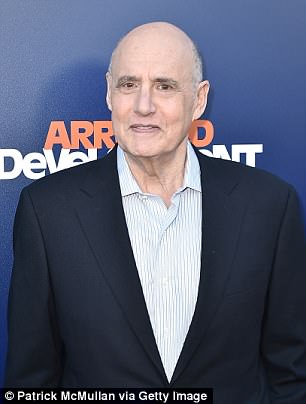 Yet that moment of forgiveness was overshadowed by her male costars who seemed more concerned with downplaying the incident for the comfort of Tambor, than supporting their weeping costar.

Bateman, 49, has since apologized for his lack of support and attempts to ‘mainsplain’ the entertainment industry to a star almost 30 years his senior

In a series of tweets on Thursday, the Horrible Bosses star wrote: ‘Based on listening to the NYT interview and hearing people’s thoughts online, I realize that I was wrong here. 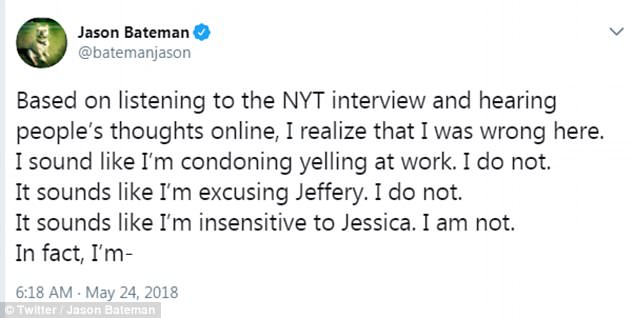 ‘I sound like I’m condoning yelling at work. I do not. It sounds like I’m excusing Jeffery. I do not.’

‘I’m incredibly embarrassed and deeply sorry to have done that to Jessica,’ he added. ‘This is a big learning moment for me. I shouldn’t have tried so hard to mansplain, or fix a fight, or make everything okay.’

The apology comes amid angry backlash against Bateman, and his male costars David Cross, Tony Hale and Will Arnett, who all appeared a little too eager to make excuses for Tambor during the awkward interview.

After the incident was raised, Hale claimed that they’ve ‘all had moments,’ to which Walter responded: ‘But not like that, not like that. That was bad.’

‘Again, not to belittle it or excuse it or anything, but in the entertainment industry it is incredibly common to have people who are, in quotes, ‘difficult,’ Bateman added.

The only actor who seemed willing to come to Walter’s defense was her female costar Alia Shawkat, who immediately rejected Bateman’s excuse that bad behavior was tolerated. 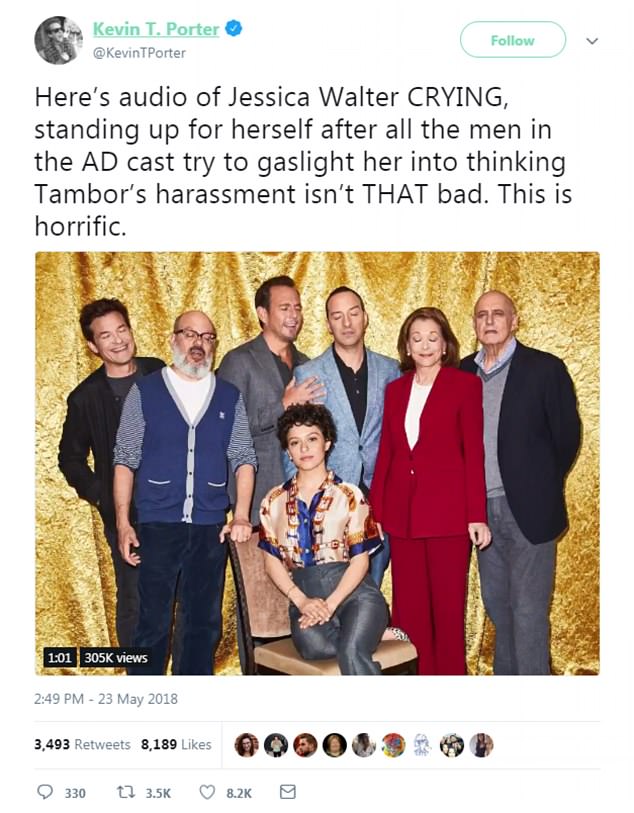 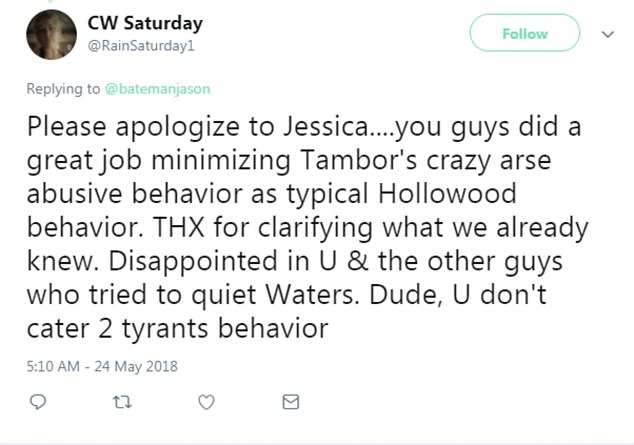 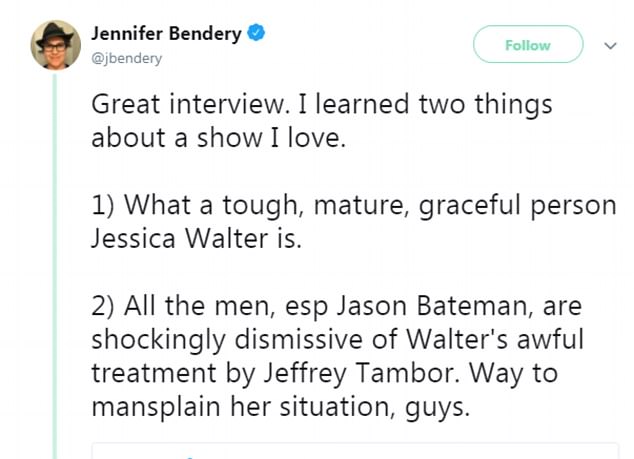 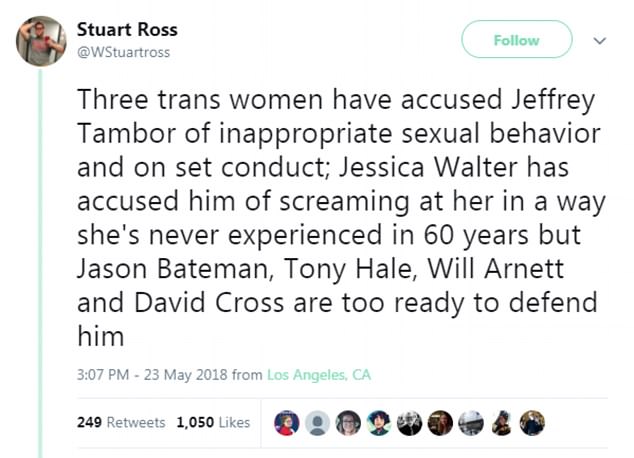 ‘But that doesn’t mean it’s acceptable,’ she said. ‘And the point is that things are changing, and people need to respect each other differently.’

Tambor, 73, who was sat just a few feet away from Walter during the interview, said that he had ‘profusely apologized’ and called Walter ‘a walking acting lesson.’

Cross also talked about how important it was to hear from Tambor in this situation, and that the actor – who was recently fired from Transparent after sexual misconduct allegations – had ‘learned from the experience and he’s listening and learning and growing.’

Fans on social media were furious by the male cast’s reactions to the Walter’s, a veteran of the big and small screen, harassment.

‘Jessica Walter actually cries in this interview about how terrible Jeffrey Tambor was to her and her male co-stars go to extraordinary lengths to comfort and defend…Tambor. FFS,’ one Twitter user wrote.

Another tweeted: ‘Jessica Walter received a Golden Globe nomination in 1971, when Jason Bateman was two years old, and he thinks he should explain to her how show business works.’ The allegations against Tambor, who plays George Bluth (in character) on the comedy sitcom, surfaced in November 2017 when two transgender women he worked with on the Amazon series Transparent accused him of sexual harassment 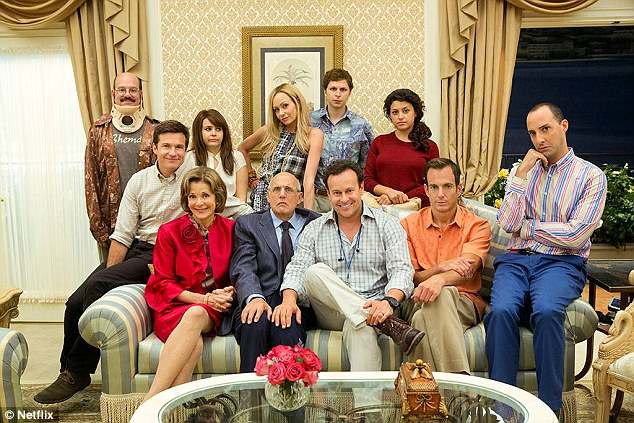 Although the Emmy winner has denied the allegations on numerous occasions, he has apologized for ‘any action that was ever misinterpreted by anyone as being sexually aggressive or if I ever offended or hurt anyone’

The allegations against Tambor surfaced in November 2017 when two transgender women he worked with on the Amazon series Transparent accused him of sexual harassment.

He lost his job as transgender matriarch Maura Pfefferman on Transparent in the wake of the allegations made by his ex-personal assistant Van Barnes and his Transparent co-star Trace Lysette.

Earlier this month, Tambor admitted that ‘lines got blurred’ when it came to Barnes, who accused him of patting her behind and saying she wasn’t ‘taking care of him sexually’.

‘I did raise my voice at times, I was moody at times. Sometimes I didn’t talk at all. There were times when I was tactless. But as for the other stuff, absolutely not.’

The San Francisco-born actor also denied rubbing his genitals against Lysette and allegedly telling her: ‘My God, Trace, I want to attack you sexually.’

Despite those allegations, Tambor did get to keep his job on Arrested Development on which he plays George Bluth, the patriarch of the Bluth family on the comedy sitcom.

Although the Emmy winner has denied the allegations on numerous occasions, he has apologized for ‘any action that was ever misinterpreted by anyone as being sexually aggressive or if I ever offended or hurt anyone’.

Tambor has since been submitted for a Primetime Emmy Award consideration for his role on Arrested Development.

According to Deadline, Netflix submitted the 73-year-old actor for the TV Academy’s category outstanding supporting actor in a comedy series on Tuesday.

‘These are accusations that he denied. I’ve worked with him for 20 years, I’ve never seen that behavior,’ the 54-year-old showrunner told ET last week.

‘Amazon didn’t share with me any of what they discovered [in their investigation], and so it was very easy for me to say no, of course I’m not going to end Arrested Development and throw out all our work based on accusations. 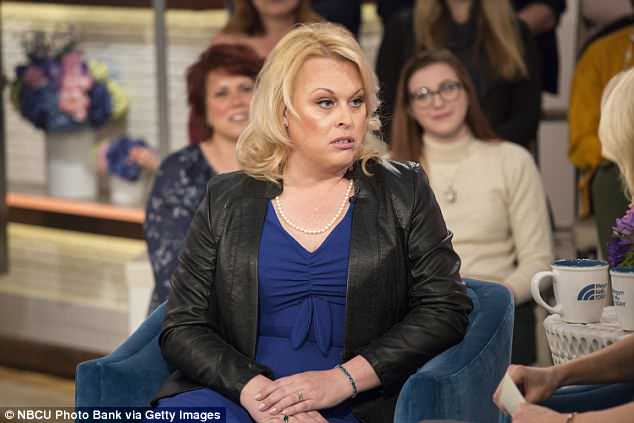 ‘I dispute her account’: Earlier this month, Jeffrey admitted that ‘lines got blurred’ when it came to ex-personal assistant Van Barnes (pictured March 7), who accused him of patting her behind and saying she wasn’t ‘taking care of him sexually’ ‘I don’t think we want to live in a world where accusations alone determine everyone’s fate.’

‘It doesn’t necessarily mean I’m going to just stop being somebody’s friend, you know? I support him as a human being as a person.’

The 54-year-old stand-up comedian – who plays Tobias Fünke – was also submitted by Netflix for the supporting actor category as well as Hale, Will Arnett, and Michael Cera.

The 70th Primetime Emmy Awards nominations will officially be announced on July 12, and the LA ceremony – airing September 17 on NBC – will be hosted by SNL’s Michael Che and Colin Jost.

The first half of the 16-episode fifth season of the Orange County-set mockumentary sitcom starts streaming next Tuesday on Netflix.

The original Arrested Development, centered on the riches-to-rags Bluths, ran for three critically-acclaimed, cult-favorite seasons (2003-2006) on Fox before switching over to Netflix.