Jason Roy is unlikely to feature in the final match of the series versus Pakistan at Headingley on Monday despite his bady daughter’s health improving.

Roy struck his eighth one-day international hundred at Trent Bridge on Friday night and then revealed he had experienced a sleepless night after two-month-old Everly required medical attention in the early hours of Friday.

Jonny Bairstow is set to return on his home ground as partner to James Vince at the top of the order while Chris Jordan has been released from the England squad to return to Sussex.

Roy said after the match on Friday night: ‘I’m not in the form of my life. It was not my most fluent of innings but it was an extremely special feeling get over three figures. I didn’t see it coming,’ the 28-year-old said.

‘I had a bit of a rough morning so this one is a special one for me and my family. It was my little one.

‘We had to take her to hospital at 1.30 in the morning. I stayed there until 8.30 and came back for a couple of hours sleep and got to the ground just before warm-up and cracked on. It was a very emotional hundred.’

England required just 140 from 22.2 overs when Roy was strangled down the leg-side off teenage fast bowler Mohammad Hasnain – a dismissal that began a mini-collapse of four wickets for 15 runs.

However Ben Stokes signaled a return to form with 71 not out to guide a team missing suspended captain Eoin Morgan home with three balls to spare. 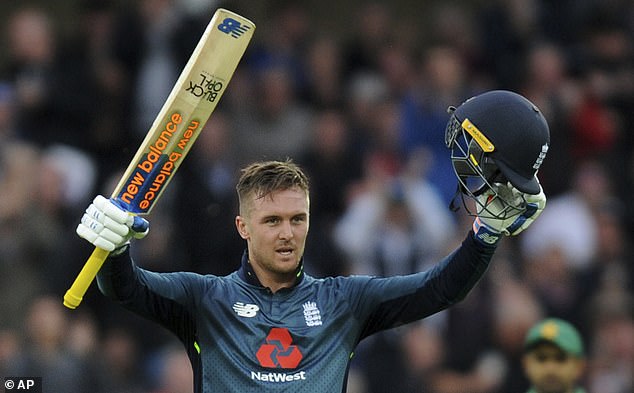