The actor son of Jaws star Richard Dreyfuss has sparked fury among his Twitter followers by announcing he’d never date or sleep with a ‘fat person’ and would encourage a partner to lose weight.

Dreyfuss, a writer and self-styled comedian, made the remarks in a thread on January 18. Spring-boarding from an unrelated article titled ‘You need help: You fat-shamed your beautiful girlfriend,’ Dreyfuss, 36, began his ‘schtick’.

‘That is outrageous! I’ve never dated a fat person!’ he declared, before launching a multi-tweet thread on the topic.

Dreyfuss in a recent Instagram post. He routinely talks about his glass eye and says he doesn’t care if followers mock it 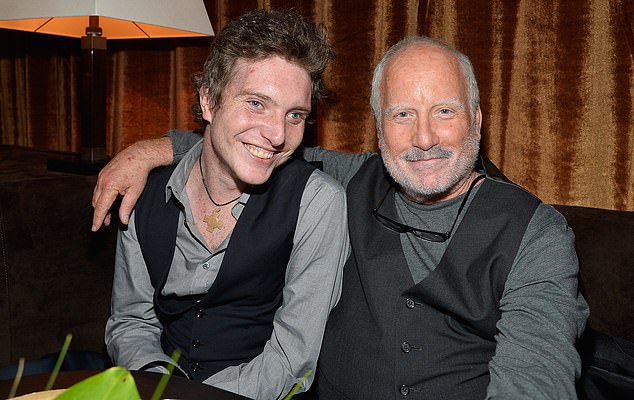 Ben Dreyfuss and actor Richard Dreyfuss in 2013. Unlike his father, Ben has failed to land any major movie roles. 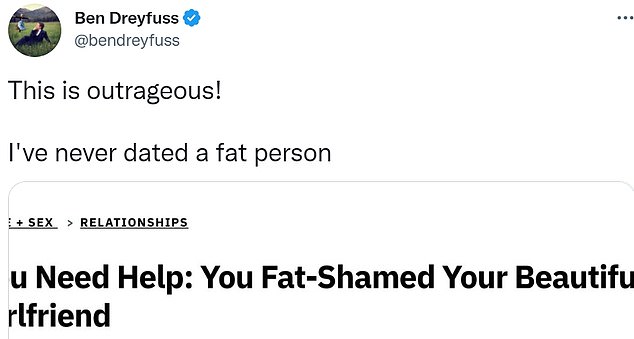 Dreyfuss’ attempt at humor didn’t land. He also claimed to have once slept ‘with a fat girl in 2007’

‘I mean I don’t even know many fat people. The few I do know I’m definitely not going to f**k.

Do you agree with Ben Dreyfuss?

‘I like to think that if I was dating someone and they gained weight, I would be supportive about how they could lose it.

‘If I fell in love with you and we were together and you put on some weight, I truly believe that I wouldn’t break up with you.

‘I would work on it with you and we would go to a fat camp together or whatever.’

Continuing his virtual stand-up, he then claimed to have slept with ‘a fat girl once’.

‘She was a conservative from long island who weighed 130, maybe 140 pounds. When she texted me a week later, I told her I was bisexual to scare her off.

‘Nowadays I don’t think you can scare off any regrettable one night stands with “I’m bi” but in 2007 you still could.’

Ben went on to say that a ‘majority’ of Americans are obese,  ‘so you cant even talk about fat vs thin without people being like “how dare you! everyone should weigh 328 pounds”‘.

Recent CDC figures say 41.9 percent of Americans are either overweight or obese.

‘Look, I’m not a nice person. I don’t live on some butter farm for fatsos. Don’t expect me to be nice about this,’ he said.

Look, I’m not a nice person. I don’t live on some butter farm for fatsos. Don’t expect me to be nice about this

Finally, he signed off: ‘I didn’t call you obese. That’s a determination for a doctor. I just meant you’re too fat for athletic people in LA and NYC.

‘I’m sure you’re totally attractive at the Iowa state fair or whatever. Godspeed.’

Dreyfuss’ attempt at humor didn’t land with his followers, but a handful – including his ex-girlfriend – did find it funny.

‘How much do you think I weigh, Ben?’ she asked.

He replied: ‘I don’t know, but I’m pretty sure most of it was in your bra,’ a quip that amused her.

Others were less impressed.

‘You can’t even nepo-baby right,’ said one follower, while others pointed out he himself has a glass eye – a fact he routinely refers to.

‘I met you once and you were the single most unpleasant person I’ve ever met,’ said another.

Dreyfuss worked for Mother Jones as an editorial director but now has a Substack page. He recently played a young Bernie Madoff in an ABC miniseries about the late fraudster.