Jean-Claude Juncker taunted the UK on his last working day as president of the European Commission as he claimed Brexit had made the EU more popular than ever.

Mr Juncker, who is stepping down at the end of a five year term, said the UK’s departure from the EU ‘breaks my heart’.

But he claimed Brexit had shown European voters the benefits of the EU as he said his email inbox is ‘overflowing with love letters’ from British people who want the UK to stay in the bloc.

The former Luxembourg PM will be remembered for imprinting his overtly friendly style on EU meetings, often pictured planting sloppy kisses on presidents and prime ministers and giving them the occasional good-natured slap.

At a summit, he even once wildly ruffled a woman’s long blonde hair in front of the cameras.

Ursula von der Leyen will replace Mr Juncker from Monday next week but the outgoing Brussels boss decided to use his final day in office to write an extensive briefing on his time in power.

Writing for Politico’s Brussels Playbook morning email he said that during his tenure he often felt like ‘Europe’s family therapist’.

Jean-Claude Juncker, pictured in Brussels on November 6, will today step down as the president of the European Commission 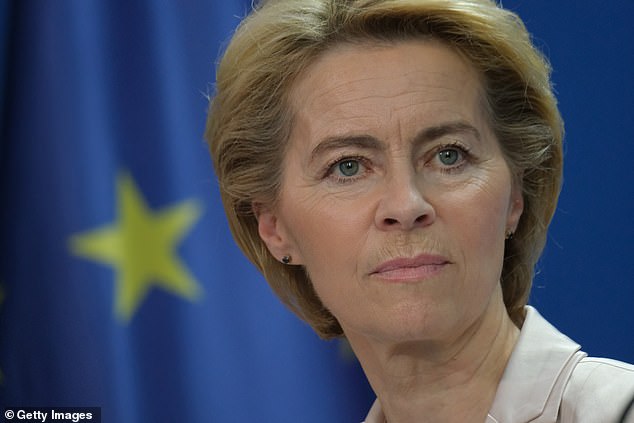 Referring to the latest Brexit delay to January 31, Mr Juncker said he ‘will be leaving before the UK does’ but he is ‘not unhappy about this because it breaks my heart to see a member of our Union leave its midst’.

‘At the same time, support for the European Union is at an all-time high (according to much beloved Eurobarometer figures),’ he said.

‘I would chalk this up in no small part to the debate around Brexit, which highlighted the merits of European membership.

‘That people are singing “Ode to Joy” in the streets of London or that my in-tray is overflowing with love letters from British citizens is surely testament to this.’

‘When it came to Brexit, I hired the most capable divorce lawyer in town,’ Mr Juncker wrote.

‘Michel, who (twice) negotiated the best divorce deal possible, while making sure the EU27 family sticks together.’

The former prime minister of Luxembourg also insisted that his departure from Brussels would not mean the end of him speaking out on Europe.

‘I am not one for farewells, so I regret to inform you that this will not be the last time you hear from me,’ he said.

‘Even as I withdraw from active politics, I will never cease to lend my voice and my heart to Europe.’