MacKenzie Scott, the ex-wife of Jeff Bezos, has married a Seattle teacher who teaches at the private school where her children are enrolled.

Scott, who was previously known as MacKenzie Bezos and is worth an estimated $53 billion, divorced the Amazon founder back in 2019 after 25 years of marriage.

The 50-year-old’s new husband is Dan Jewett – a science teacher at the private Seattle Lakeside School where the children she shares with Bezos attend.

It is not yet clear when Scott and Jewett married or how long they have been together.

Bezos, who shares four children with his ex-wife, said in a statement via an Amazon spokesman: ‘Dan is such a great guy, and I am happy and excited for the both of them’.

The couple first mentioned their marriage publicly on Saturday in a post on the Giving Pledge – a site where billionaires and millionaires vow to dedicate their wealth to others.

MacKenzie Scott, who is worth an estimated $53 billion, has married Seattle teacher Dan Jewett following her 2019 divorce from Amazon founder Jeff Bezos. Scott and Jewett are pictured above together in an undated photo

A source confirmed Scott and Jewett’s marriage to the Wall Street Journal.

The private school where Jewett teaches and his wife’s children attend is for grades five to 12 and costs $38,000 per year.

Famous alumni of the private school include Bill Gates.

In a post on the site, Jewett said he was joining his wife’s ‘commitment to pass on an enormous financial wealth to serve others’.

‘It is strange to be writing a letter indicating I plan to give away the majority of my wealth during my lifetime, as I have never sought to gather the kind of wealth required to feel like saying such a thing would have particular meaning,’ Jewett wrote.

‘I have been a teacher for the majority of my life, as well as a grateful student of the generosity of those around me. This has meant doing my best to follow their example by passing on resources of all kinds – from time, to energy, to material possessions – when I have had them to give.

‘And now, in a stroke of happy coincidence, I am married to one of the most generous and kind people I know – and joining her in a commitment to pass on an enormous financial wealth to serve others.’

Since her divorce from Bezos in 2019, Scott – who helped create Amazon – has already dedicated a portion of her wealth. 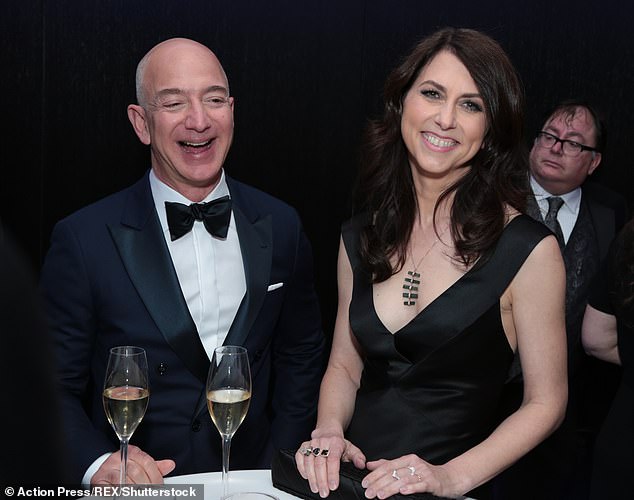 Scott, who was previously known as MacKenzie Bezos and is worth an estimated $53 billion, divorced the Amazon founder back in 2019 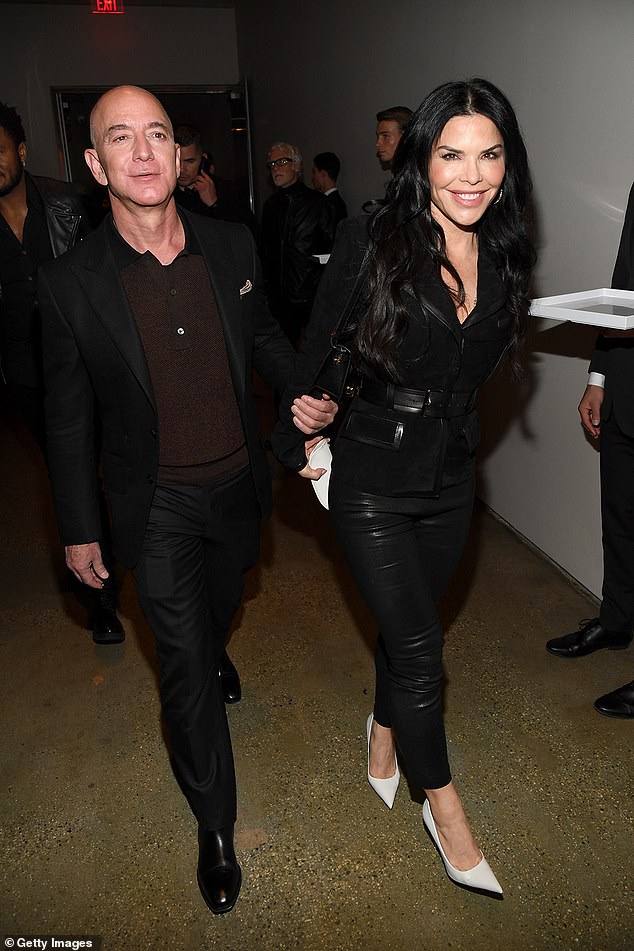 MacKenzie and Jeff announced their separation in January 2019 shortly before the billionaire’s affair with Lauren Sanchez was exposed. Sanchez and Jeff are still together and are pictured above in February last year

In a Medium post in December, Scott revealed she had given away $4.1 billion in the previous four months to hundreds of organizations in a bid to help those financially gutted by the COVID-19 pandemic.

She had previously donated $1.68 billion to 116 nonprofits, universities, community development groups and legal organizations in July 2020.

The donations are related to her Giving Pledge commitment that she made after divorcing Bezos.

The Giving Pledge site was created by Bill and Melinda Gates and Warren Buffet.

Other cosigners include Steve and Jean Case; Mark Zuckerberg and Priscilla Chan; and Sara Blakely.

Bezos has so far not signed the pledge but he does routinely donate some of his wealth to charitable causes. 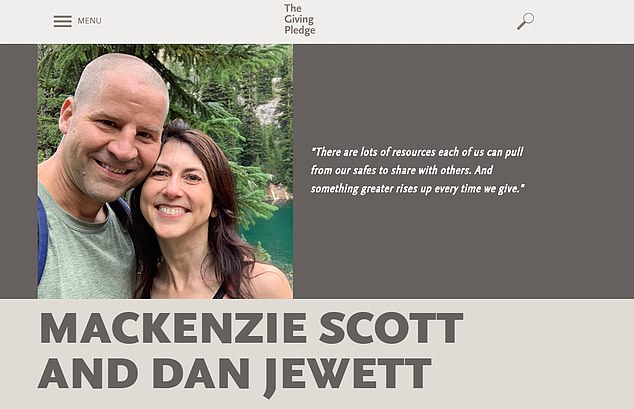 The couple first mentioned their marriage publicly on Saturday in a post on the Giving Pledge – a site where billionaires and millionaires vow to dedicate their wealth to others. Their joint page is pictured above

Scott pledged to donate the majority of her fortune after her divorce from the world’s richest man left her with a 4 percent stake in Amazon, which translates to 19.7 million shares.

Her wealth surged another $30.3 billion last year after Amazon shares rocketed amid the COVID-19 pandemic.

MacKenzie and Jeff were married from 1993 to 2019 and share four children together.

They announced their separation back in January 2019 shortly before the billionaire’s affair with Lauren Sanchez was exposed.

Their divorce was finalized in April 2019 with Jeff keeping 75 percent of the couple’s stock and MacKenzie receiving shares worth roughly $35 billion at the time.

Sanchez and Jeff are still together.

Her 14-year marriage to Hollywood agent husband Patrick Whitesell came to an end after the affair was exposed.