Jeff Sessions ranted the FBI was ‘better off when you only hired Irishmen’ because ‘they were drunks, but could be trusted,’ new Andrew McCabe book claims.

The former acting director of the FBI says that Trump’s attacks on the FBI led them to seriously consider having Justice Department deputy director Rod Rosenstein wear a wire to record President Donald Trump.

He paints former Attorney General Sessions as unprofessional – someone who did not read intelligence reports and confused facts with news reports.

McCabe makes the explosive claims about Trump and his staff in an upcoming new tell-all book, The Threat. 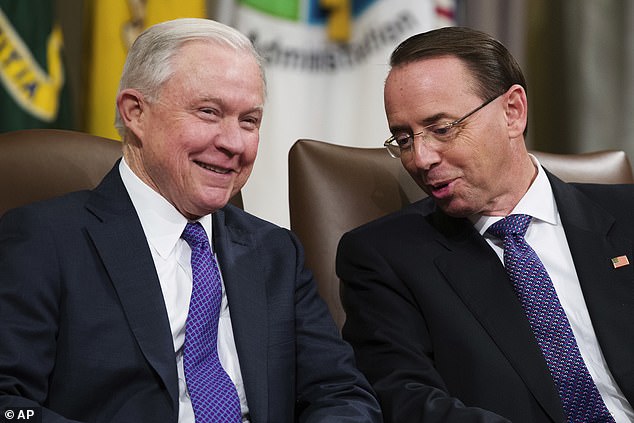 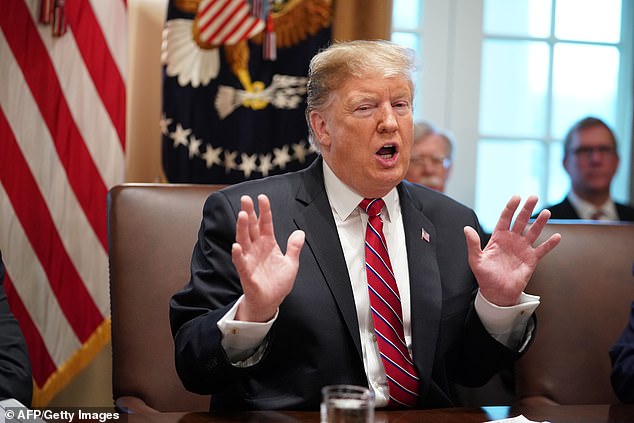 President Donald Trump was irate over James Comey’s use of an FBI jet to fly from Los Angeles to Washington after he fired him in May 2017, according to a new book by Comey’s deputy 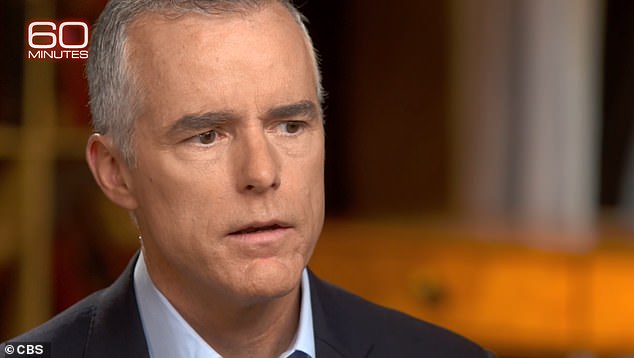 Then-deputy FBI chief Andy McCabe, who took over as acting director before his own firing the next year, says in a the book that Trump wanted Comey to pay for his own flight home even though the FBI’s plane already had Comey’s security detail on board and had to fly back to D.C. anyway

In excerpts from the book obtained by the Washington Post, McCabe claims Sessions blamed migrants for social problems and had racist sentiments.

Sessions allegedly stereotyped Irishmen as honest drunks when comparing the FBI’s former workforce to their modern counterparts: ‘They could be trusted. Not like all those new people with nose rings and tattoos — who knows what they’re doing?’

McCabe doubled-down on the allegations against the Trump Administration in a recent ’60 Minutes’ interview on CBS, telling the broadcaster that lawyers were asked to consider secretly recording the President in the spring of 2017.

‘McCabe … says no, it came up more than once and it was so serious that he took it to the lawyers at the FBI to discuss it,’ CBS anchor Scott Pelley said, describing his interview with McCabe.

Justice Department officials said at the time the remark was a joke and meant sarcastically.

McCabe also claims the President vented to him after firing James Comey that the suddenly former FBI chief was allowed to fly home from California at government expense.

Comey was giving a speech in Los Angeles when people in his audience told him cable news channels were announcing that he had been terminated.

The Comey deputy who took over the law enforcement agency writes that the vindictive President thought Comey should pay for his own airline ticket back to Washington to clear out his desk.

Instead the ousted lawman hopped on the same FBI jet he had used to fly west.

‘I told him that bureau lawyers had assured me there was no legal issue with Comey coming home on the plane. I decided that he should do so,’ McCabe writes, describing a phone call the following day.

‘The existing threat assessment indicated he was still at risk, so he needed a protection detail. Since the members of the protection detail would all be coming home, it made sense to bring everybody back on the same plane they had used to fly out there. It was coming back anyway.’ 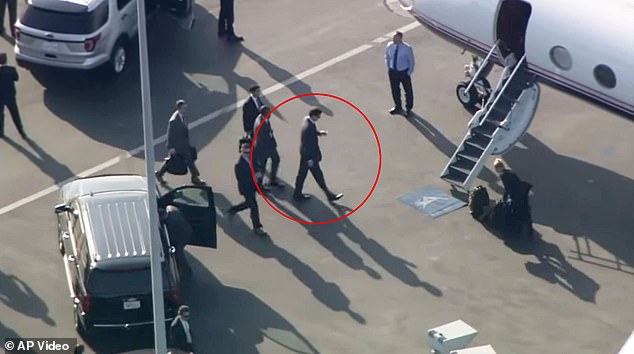 Newly fired FBI director James Comey left Los Angeles on a plane to return to Washington on May 9, 2017 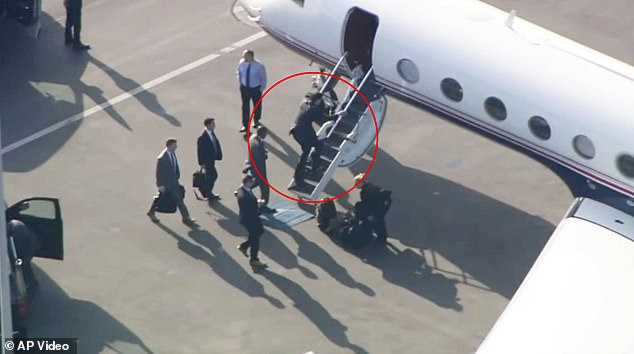 Video footage showed Comey climbing aboard the government jet, something that enraged the president when he learned about it

‘The President flew off the handle,’ McCabe continues, quoting Trump: ‘That’s not right! I don’t approve of that! That’s wrong!’

‘The President said, I want you to look into that!’ he adds. ‘I thought to myself: What am I going to look into? I just told you I made that decision.’

The retelling was first published by The Atlantic, in the form of an excerpt from McCabe’s book. 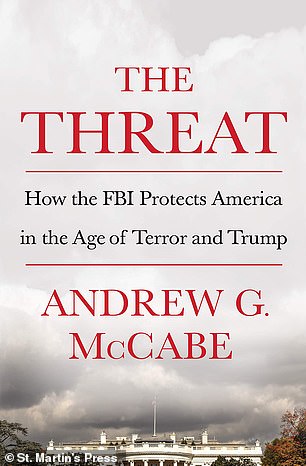 McCabe is promoting a book, due for a Feb. 19 release

The phone call started, McCabe recalls, with Trump calling him on an unsecure, unclassified line and introducing himself by an unfamiliar nickname.

‘The voice on the other end said, “It’s Don Trump calling”,’ he writes.

‘I said, “Hello, Mr. President, how are you?” Apart from my surprise that he was calling at all, I was surprised that he referred to himself as “Don”.’

McCabe also writes in his book that Justice Department officials at one point mulled a plan to invoke the 25th Amendment to the U.S. Constitution.

The would have allowed Trump’s adversaries in his own administration to  remove him from office with a majority vote of his Cabinet and the backing of Vide President Mike Pence.

McCabe, whose book is slated for a Feb. 19 release, may have a personal reason to go after the president: He recounts verbal slashing Trump offered on the expense of his wife Jill, who mounted a failed 2015 run for a state senate seat in Virginia.

The president asked after Jill, he writes, asking in a sneering tone: ‘Yeah, that must’ve been really tough. To lose. To be a loser.’

A statewide political action committee called Common Good VA contributed $467,000 to her campaign. Hillary Clinton headlined a fundraiser for the group shortly beforehand, raising $500,000 for it.

The PAC was run at the time by Terry McAuliffe, then the governor of Virginia. McAuliffe is a longtime Bill Clinton fundraiser and former Democratic National Committee chairman.

Jill McCabe’s campaign also received more than $207,000 from the Democratic Party of Virginia, over which McAuliffe exerted significant control.

Common Good VA was the largest single donor to the McCabe campaign.

Trump dismissed McCabe Thursday on Twitter, referring to his firing. 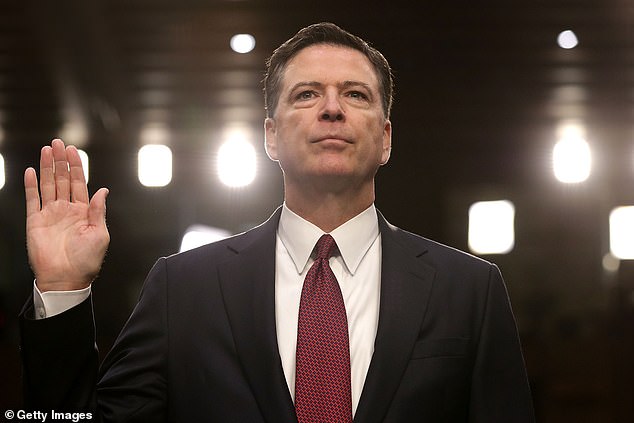 Comey learned he had been sacked while giving a speech in L.A.: he thought members of the audience were joking when they told him TV screens in the auditorium flashed news of his pink-slip while he was on stage

‘Disgraced FBI Acting Director Andrew McCabe pretends to be a ‘poor little Angel’ when in fact he was a big part of the Crooked Hillary Scandal & the Russia Hoax – a puppet for Leakin’ James Comey,’ Trump wrote.

White House Press Secretary Sarah Sanders said in a statement read on MSNBC that McCabe ‘was fired in total disgrace from the FBI because he lied to investigators on multiple occasions, including under oath.’

‘His selfish and destructive agenda drove him to open a completely baseless investigation into the President. His actions were so shameful that he was referred to federal prosecutors. Andrew McCabe has no credibility and is an embarrassment to the men and women of the FBI and our great country.’ 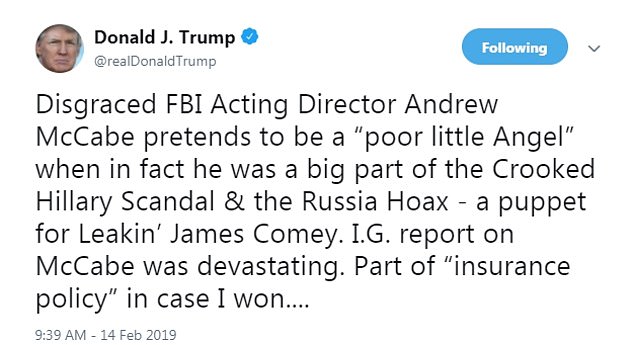 The president vented at McCabe Thursday on Twitter, saying he was a ‘puppet’ for Comey