Jeff Sessions to hit out at campuses muzzling free speech

Attorney General Jeff Sessions has found another way to stay on President Trump’s good side, with a Tuesday speech planned where he will rip into campus PC culture as a ‘a shelter for fragile egos.’

Sessions, whose job was on the line during the summer following the president’s fury over his decision to recuse himself from the Russia investigation, has found himself on more solid ground after intervention by Republican allies.

Since then, Sessions has bolstered his standing with a vow to require federal prisoners to face tough sentences and his announcement that DACA would be rescinded.

On Tuesday at Georgetown University, he takes up another cause dear to President Trump: political correctness, and what he terms a ‘cottage industry’ of protesters.

A source close to Sessions told DailyMail.com another line in the speech will call out protesters tho force administrators to ‘capitulate’ to their demands.

‘But who is to decide what is offensive and what is acceptable, what is odious and what is good? The university is supposed to be about the search for truth, not the imposition of truth by a government censor,’ Sessions will say.

The AG will add: ‘This has allowed a cottage industry of protestors to crop up who understand school administrators will capitulate to their demands and are now routinely shutting down speeches and debates across the country in an effort to silence voices that are insufficiently orthodox on their pet issues,’ according to the source close to Sessions. 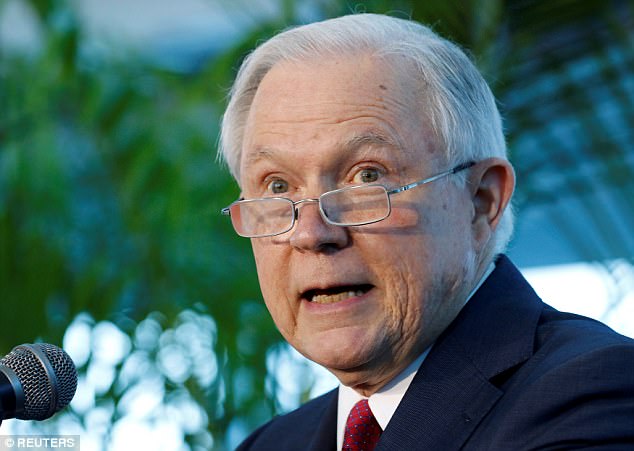 Attorney General Jeff Sessions plans to call out campus political correctness and censorship in a Tuesday speech. ‘Who is to decide what is offensive and what is acceptable, what is odious and what is good?’ he plans to say

A source told Axios will slam U.S. colleges as an ‘echo chamber’ of political correctness.

‘Whereas the American university was once the center of academic freedom — a place of robust debate, a forum for the competition of ideas — it is transforming into an echo chamber of political correctness and homogenous thought, a shelter for fragile egos,’ the attorney general plans to say.

It wasn’t clear from advanced remarks which campus protests Sessions would target.

Antifa and other protesters managed to stop an appearance by right-wing provocateur Milo Yiannopoulos at a ‘Free Speech Week’ events at the University of California at Berkeley in February. The event led to violent protests.

Yiannopoulos held his own forum on Sunday after organizers nixed an event.

‘We are unable to hold an official UC Berkeley speaking event, Yiannopoulos said amid intense security. “So we’re going to host an unofficial one,’ the LA Times reported.

In July, Trump tweeted that his attorney general was ‘beleaguered’ and in a ‘VERY week’ position, asking why investigators weren’t looking into ‘Crooked HIllarys crimes & Russia relations.’