Laura Goldman, who knows Ms Maxwell’s sister Isabel, said the 57-year-old – who is accused of procuring underage girls for Epstein – had a ‘super power’ when it came to attracting men.

She also called the socialite ‘sex-obsessed’ and claimed she regularly discussed oral sex techniques in public. 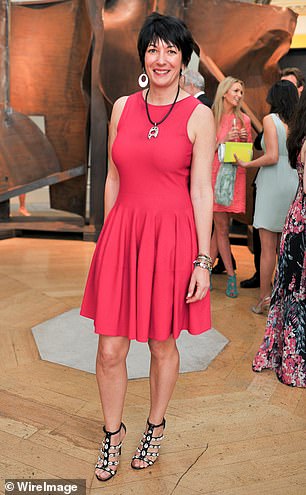 Ghislaine Maxwell, who is accused of procuring underage girls for Epstein, is ‘sex-obsessed’ and regularly discusses oral sex techniques in public, it is claimed

Ms Goldman told Sun Online: ‘I’ve heard that Ghislaine has a new boyfriend. One of her talents if finding a man to take care of her.

‘She’s good at that. It’s like a super power. Her super power is she finds men to take care of her…

‘But I get her appeal to guys. All she ever talked about was “sex, sex, sex”.’

Ms Maxwell was previously linked to tech CEO Scott Borgerson, 43, who abandoned his wife and young children to be with her, Dailymail.com revealed.

‘Scott left his wife for Ghislaine around five years ago. It’s just egregious what’s happened to Rebecca,’ the source, who asked for anonymity, said in August.

‘Rebecca and Scott seemed like a really nice couple. But as time went on, he was very preoccupied and would be on his cell phone a lot, presumably on business calls. He was away a lot for work.’ 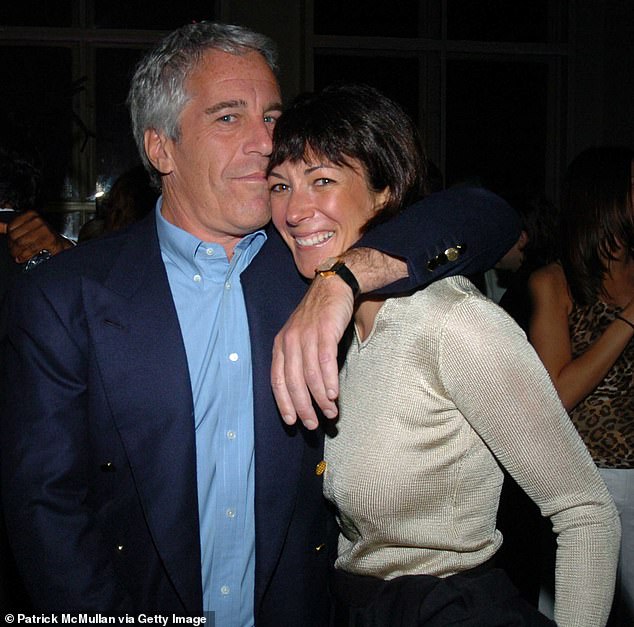 Ms Maxwell has rarely been seen in public since Epstein was found dead in his jail cell in August, where he was awaiting trial on sex trafficking charges. They’re seen together in 2005

Epstein was found dead in his jail cell in August, where he was awaiting trial on sex trafficking charges.

In court papers published this week, she revealed for the first time how she recruited women to massage Epstein at his home ‘at least once a day’.

Ms Maxwell, who introduced Epstein to Prince Andrew, told how she managed Epstein’s six houses around the world and hired ‘lots of people’ – but denied procuring young girls for him to have sex with.

Ms Maxwell said she knew Andrew’s sex-accuser Ms Roberts was 17 when she started massaging Epstein, but said her account about abuse she claims she suffered at the hands of the royal and his paedophile friend was a lie.

In her video statement to a New York court in a libel action brought by Ms Roberts, Ms Maxwell outlined her role for the disgraced businessman.

‘My job included hiring many people. There were six homes,’ she said. ‘I hired assistants, architects, decorators, cooks, cleaners, gardeners, pool people, pilots. I hired all sorts of people.’

‘A very small part of my job was to find adult professional massage therapists for Jeffrey,’ she said.

‘From time to time I would visit professional spas. I would receive a massage and if it was good I would ask them if they did home visits.’

In her evidence Ms Maxwell admitted knowing Ms Roberts was just 17 years old when she began giving massages to Epstein at his mansion in Palm Beach, Florida.

Asked how often the teenager would massage Epstein, she said: ‘It’s important to understand that I wasn’t with Jeffrey all the time.

‘In fact, I was only in the house less than half the time, so I cannot testify to when I wasn’t there how often she came.

‘What I can say is that I barely would remember her, if not for all of this rubbish.

‘I probably wouldn’t remember her at all, except that she came from time to time. But I don’t recollect her coming as often as she portrayed herself.’

Ms Maxwell gave evidence at the defamation hearing with Ms Roberts in 2017.

Ms Roberts was suing her over her claims that she was forced to have sex with Epstein and the Duke of York.

How Ghislaine Maxwell stole fourteen-years-younger millionaire tech CEO Scott Borgerson away from his wife and two young kids, moved into his seaside mansion and stayed under the radar until Jeffrey Epstein’s arrest

Scott Borgerson, 43, the CEO of a tech company, left his wife, Rebecca, and two young children for 57-year-old Maxwell, a source close to the family told DailyMail.com.

‘Scott left his wife for Ghislaine around five years ago. It’s just egregious what’s happened to Rebecca,’ the source, who asked for anonymity, told DailyMail.com.

‘Rebecca and Scott seemed like a really nice couple. But as time went on, he was very preoccupied and would be on his cell phone a lot, presumably on business calls. He was away a lot for work.’

When the marriage finally crumbled in 2014, divorce records paint a disturbing picture of Borgerson, with accusations of him being physically violent, abusive, ‘extremely controlling’ and having an alcohol problem.

Borgerson, who married Rebecca in Palm Beach, Florida, in May 2001, once allegedly threatened her, saying: ‘Don’t make me beat you in front of the children.’ 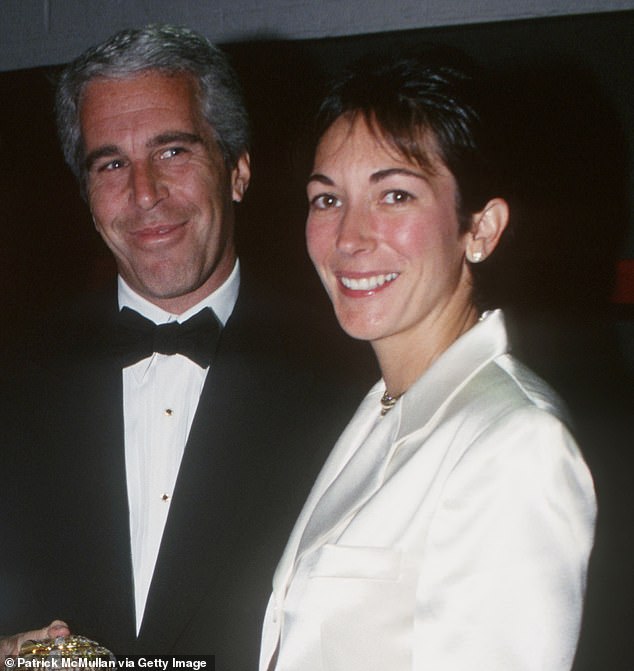 Ghislaine Maxwell’s boyfriend Scott Borgerson abandoned his wife and children for Jeffrey Epstein’s suspected madam, DailyMail.com has learned exclusively. Maxwell is alleged to be one of the main players in a network of recruiters and enablers who provided Epstein with underage girls to sexually abuse

Borgerson’s shipping technology firm, Cargometrics, was valued at more than $100 million in 2016, according to the Financial Times.

Borgerson is believed to have met Maxwell five years ago through speaking engagements connected to ocean preservation, a subject on which they share a passion. They both are pictured speaking at the Arctic Circle Assembly in Reykjavik in 2014.

Maxwell shut down her ocean charity, the TerraMar Project, a week after Epstein was arrested in July.

Around 2015, Borgerson told Rebecca he was going to London on business and he would send videos. 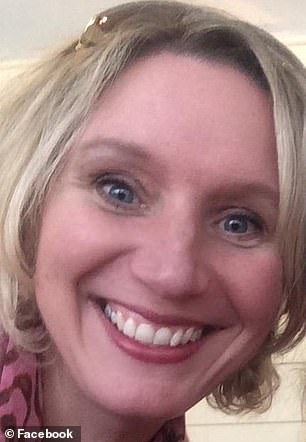 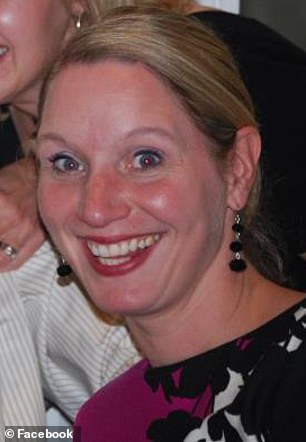 The marriage fell apart when Borgerson sent Rebecca (left and right) a video of himself in Miami with Ghislaine, and the two were ‘hugging and kissing’, a close family source told DailyMail.com.  Borgerson, who married Rebecca in Palm Beach, Florida, in May 2001, once allegedly threatened her, saying: ‘Don’t make me beat you in front of the children’

‘Rebecca watched a video of him and although he said he was going to be in London, he was actually in Miami with Ghislaine,’ the source said.

‘Rebecca was sitting there with her two young children watching this video of Scott and Ghislaine hugging and kissing.

‘Rebecca was devastated. Things quickly fell apart after that.

‘He moved out. As far as I understand, Rebecca had little financial support and she had to get a job as a caregiver.’

The source added: ‘How could you throw all that away, those wonderful children and wife, for a woman who is 14 years older than him and allegedly has a role in this whole Epstein business?’

The fall out was nasty, with the final straw in their union being when Borgerson attacked Rebecca on June 15, 2014 and was charged with assault and domestic battery, according to court papers. 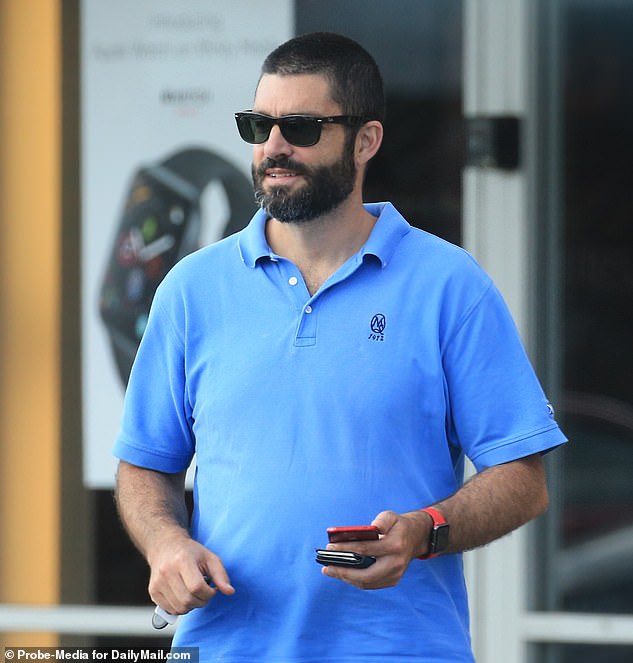