Jemma Lucy welcomed a baby girl into the world on Saturday.

And three days post-birth, the Ex On The Beach star proved she was revelling in motherhood as she shared a sweet snap with her newborn and shared a picture of herself.

In an adorable snap, the new mother, 31, cuddled up to her daughter as she penned: ‘Can’t believe I made her’.

New mum: Three days post-birth, Jemma Lucy roved she was revelling in motherhood as she shared a sweet snap with her newborn

Jemma also took to her Instagram Stories to share a photograph of herself clad in a crop top and low-slung trousers as she teased fans with her ‘pregnancy plan.’

The reality starlet showcased her heavily tattooed physique in the dark grey sports bra and light grey jogging bottoms, after thanking fans for their congratulatory messages following the birth of her daughter.

With her brunette tresses scraped into a voluminous twisted ponytail atop her head, the mother-of-one hid her face with one hand, whilst taking the selfie with another. 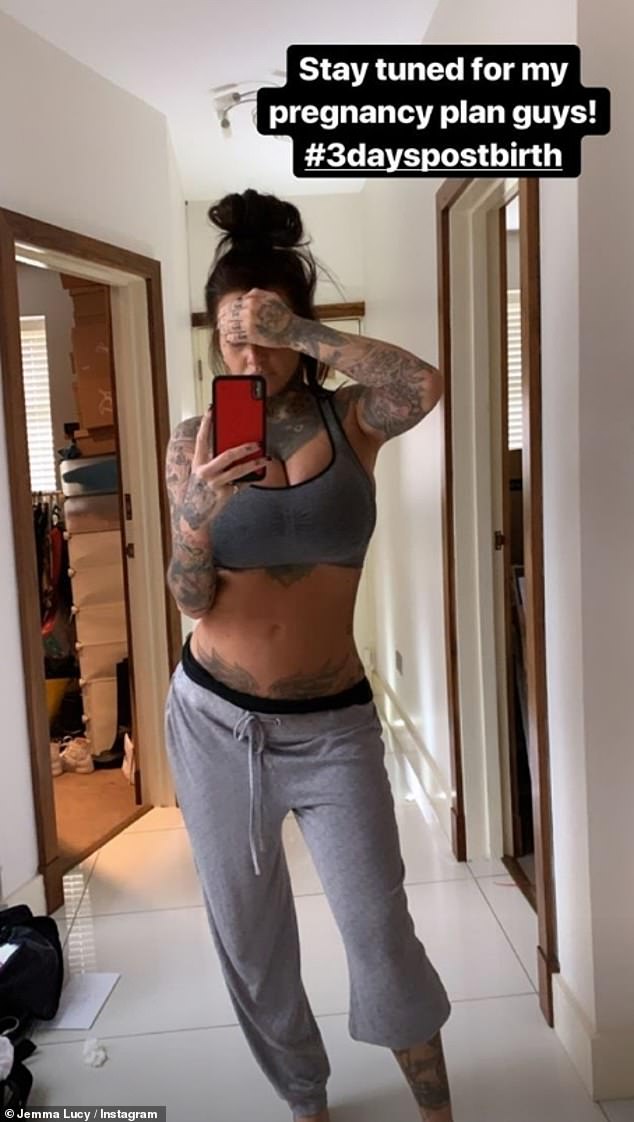 Plan: The Ex On The Beach star  took to her Instagram Stories to share a snap of herself clad in a crop top and low-slung trousers as she teased her ‘pregnancy plan’

A few hours earlier, the new mother wrote in an upload: ‘Slowly will get back to all the WhatsApps and DMs thank you everyone for all your msgs.’

Jemma took to Instagram on Tuesday to share a picture of her little ‘angel’ and revealed she gave birth to her daughter at North Manchester General Hospital on Saturday. 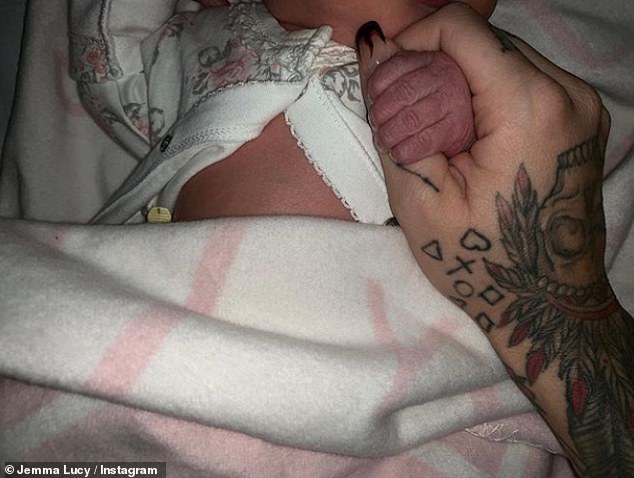 Sweet: The Ex On The Beach star welcomed a baby girl on Saturday, and took to Instagram on Tuesday to announce that she’d she gave birth with a picture of her little ‘angel’ 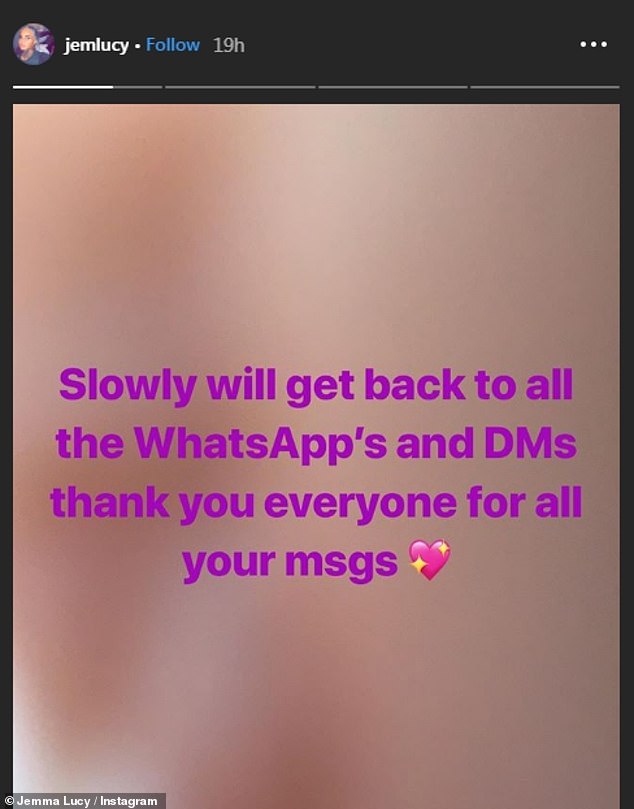 Thank you: On Tuesday, the new mother also wrote in an upload: ‘Slowly will get back to all the WhatsApps and DMs thank you everyone for all your msgs’

The television personality uploaded a sweet shot of herself holding her little one’s hand as the newborn slept peacefully in a pink blanket.

She captioned the post: ‘My angel is here never felt love like this before born 25.5.19 my world’.

Back in December, Jemma stunned fans when she announced she is pregnant, and the controversial star admitted she debated not going through with having her first child yet decided to ‘do the right thing’.

In her initial pregnancy announcement, she vowed to never reveal the father’s identity after a secret two-year romance yet has now divulged details of their ‘toxic’ relationship which included a kidnap attempt and bids to abort her child.

The formerly hard-partying star confessed she had been struggling with the side effects of her pregnancy while also admitting she is aware doubts will be rife, but she remains defiant in her abilities to care for the child. 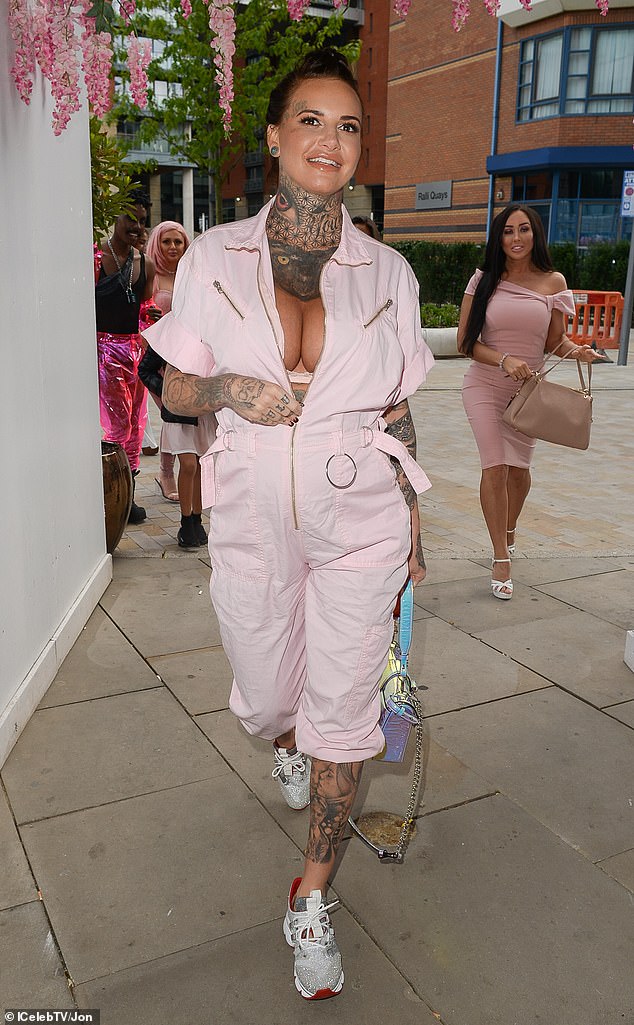 New mum: Jemma said of her newborn daughter ‘My angel is here never felt love like this before born 25.5.19 my world’ (pictured at her baby shower last week)

Jemma’s behaviour whilst pregnant was controversial, however, as she was slammed by fans when she took to Instagram last month to plug a series of weight loss products, which include capsules, coffee, tea and hot chocolate.

Following a flurry of complaints there are reports she could face investigation by the Advertising Standards Authority for promoting weight loss products while expecting.

The reality personality shared a racy snap while posing next to a plethora of products by The Skinny Caffe, which claim to help users lose up to 7lbs in seven days.

The post garnered 24 complaints, with concerns raised that it was not obviously identifiable as an advert and was ‘irresponsible’ due to the star promoting weight loss products while pregnant. 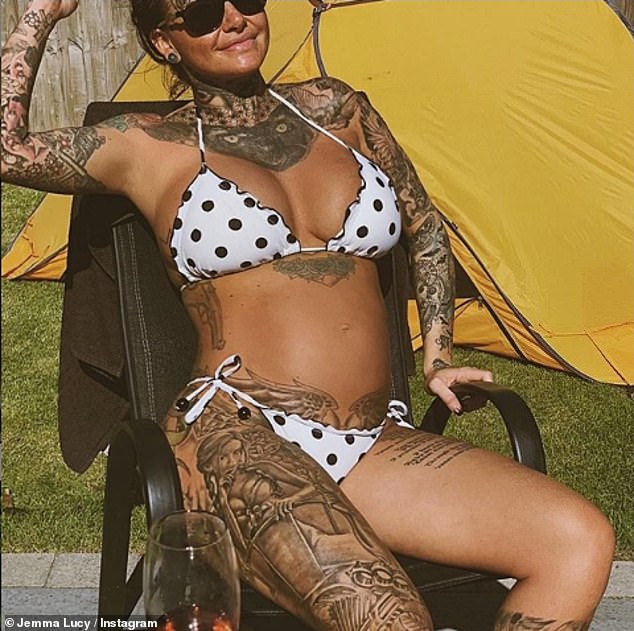 Candid: The formerly hard-partying star confessed she had been struggling with the side effects of her pregnancy and admitting she is aware doubts will be rife about her parenting 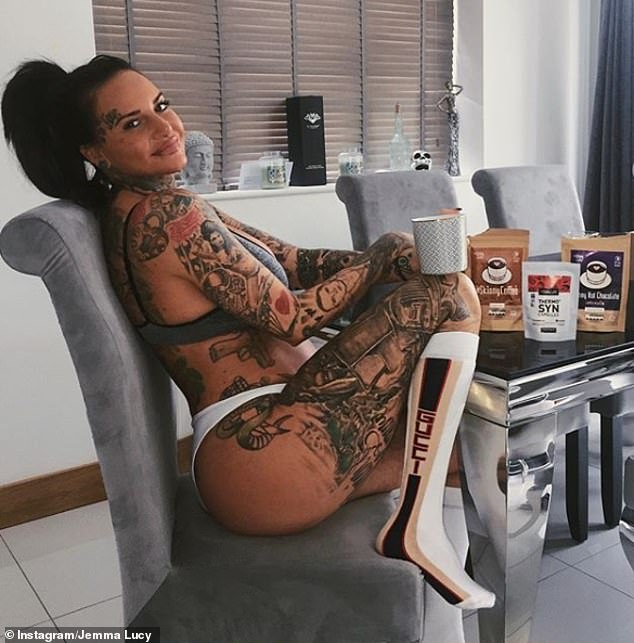 Expecting: The former Ex On The Beach star, was slammed by fans when she took to Instagram earlier this month to plug weight loss products- and could now face investigation

MailOnline contacted representatives for Jemma Lucy and the ASA for comment at the time.

The star, real name Jemma Henley, got her first taste of TV fame on Channel 4’s Brat Camp in 2005, where she was sent to a US correctional centre following a string of offences including shoplifting and being expelled from three schools.

Following this, she competed on Signed by Katie Price, a reality show hoping to find a protegé for the model, before she launched herself into the reality world on EOTB.