Jenna Bush Hager penned a sweet tribute to her twin sister Barbara on their 38th birthday before celebrating her big day on the Today show, where she was surprised with a visit from her husband and a cake filled with her favorite food — queso.

The host took to Instagram before stepping on stage for Today with Hoda & Jenna to share photos of herself with Barbara while reminiscing about the first flight they ever took without their parents, George W. and Laura Bush.

‘Another trip around the sun with my sissy!!!’ she wrote. ‘We were seven when we went on our first flight without our parents. We should have been scared as we flew the hour to visit our grandparents in Midland. But we weren’t. Not at all.

Best friends: Jenna Bush Hager took to Instagram on Monday morning to pay tribute to her twin sister Barbara on their 38th birthday with a series of photos, including this selfie 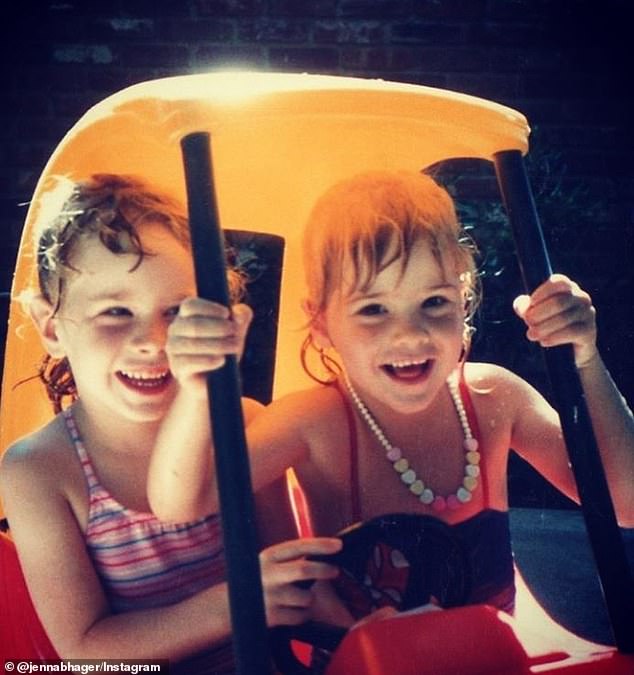 Looking back: In her heartfelt post, she reminisced about the first flight they took without their parents when they were seven years old

‘Holding Barbara’s hand as I walked down the tarmac, I felt brave,’ she recalled. ‘She’s always made me feel more courageous. And funny. No one laughs at my jokes like she does.’

Jenna went on to explain how they got into a fight on the plane, but another passenger brought them together in an unexpected way.

‘On the flight, we got into an argument as sisters do. I was most likely more aggressive,’ she admitted. ‘After a while, the man seated on the aisle said, looking at my sister: “Are you going to hit her or should I?” And that ended our fight.

‘We were a team again,’ she continued. ‘She—protecting me—put her little arm around my shoulder. No one was going to hurt her sister. And that’s my sister: all heart and all action. She loves fiercely and lives joyfully. And, I’m so lucky she’s mine! Happy Birthday sissy!’

The post received plenty of love, with Jenna’s co-star Savannah Guthrie gushing about how moved she was by her words. 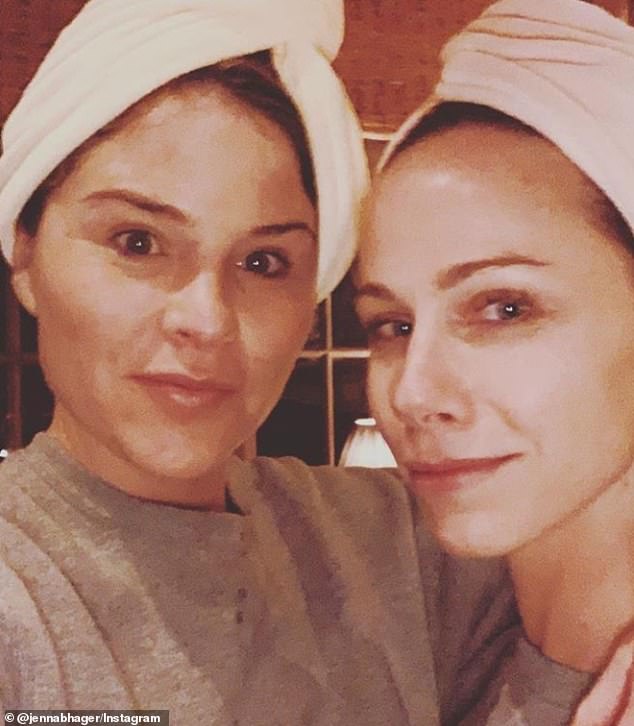 Memories: Jenna recalled getting into an argument with her twin on the plane when a fellow passenger asked Barbara, ‘Are you going to hit her or should I?’ 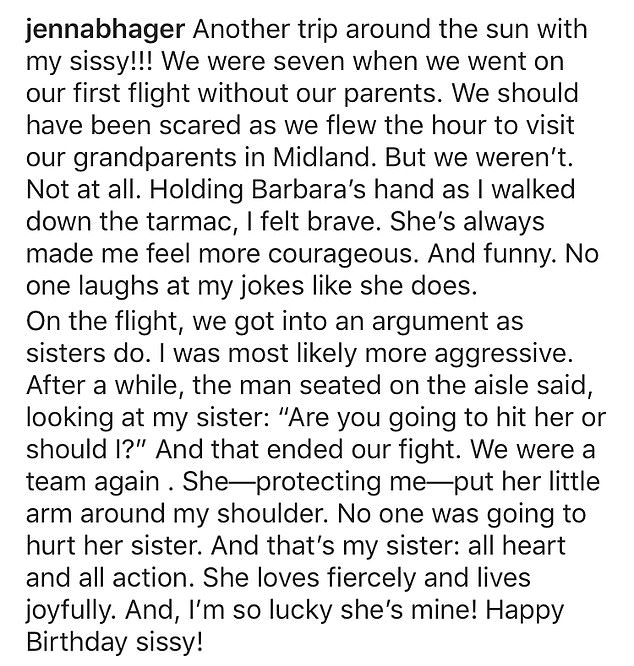 Sisterly love: Jenna said the fight immediately ended and Barbara put her arm around her shoulder to protect her, refusing to let anyone hurt her 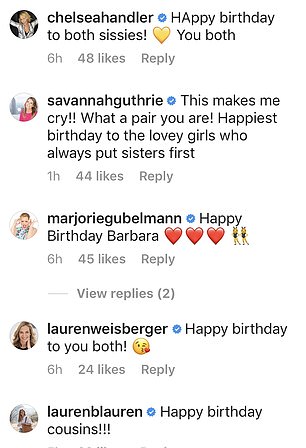 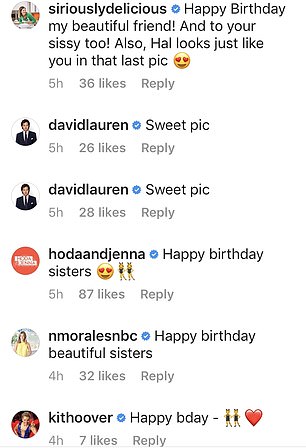 Lots of likes: The post received plenty of love, with Chelsea Handler, Savannah Guthrie, and their cousin Lauren Bush Lauren all wishing the sisters a happy birthday

‘This makes me cry!!’ she wrote. ‘What a pair you are! Happiest birthday to the lovely girls who always put sisters first.’

‘Happy birthday to both sissies!’ Chelsea Handler commented. ‘[Love] you both.’

Jenna wished her beloved sister a happy birthday for the second time on the show’s fourth hour while revealing her husband Henry Hager had stopped by Studio 1A earlier in the day to give her a handwritten letter. Cheers! The host celebrated her birthday on the fourth hour of the Today show on Monday 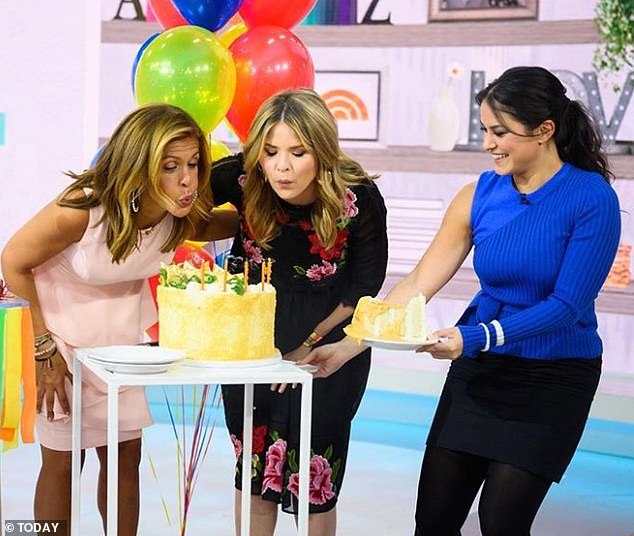 Teamwork: Hoda, 55, helped Jenna blow out the candles on her one-of-a-kind cake, which was filled with queso

Jenna seemed more interested in celebrating Hoda’s engagement news, which was announced earlier on in the show, but her co-star insisted on talking about her birthday.

As part of the celebration, a few famous faces filmed birthday messages for Jenna to watch live on air on Monday.

She got a birthday shout out from country singer Kacey Musgraves, who said: ‘From one Texas girl to another, Jenna, happy birthday.’

‘Happy birthday, Jenna. I’ll see you at the bookshop,’ added Hamilton creator Lin-Manuel Miranda before he blew her a kiss.

Meanwhile, Dolly Parton sang ‘Happy Birthday’ to Jenna, putting her own personal touch on the tradition. 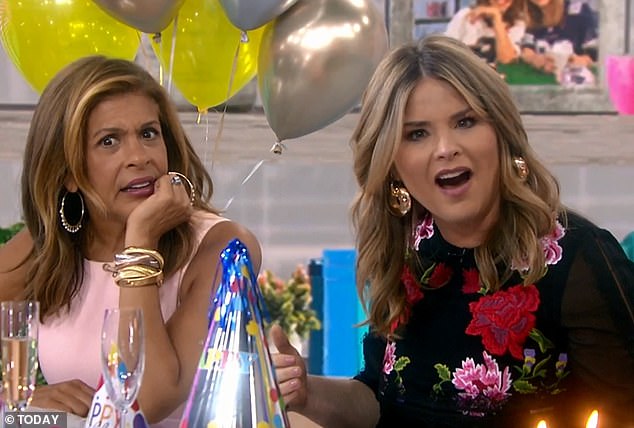 ‘Wait, what?’ When Today social contributor Donna Farizan wheeled out a four-tiered cake filled with melted queso cheese, both of the hosts were a bit shocked 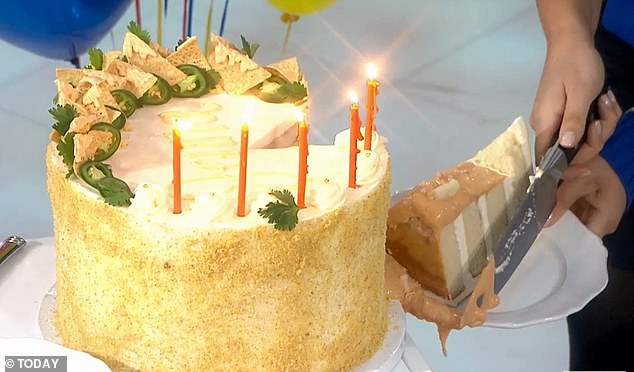 Yikes: Tons of queso oozed out and dropped onto the floor when Donna cut into the cake

‘I will always love you,’ she belted out at the end, singing her famous song of the same name.

‘I love you, Dolly!’ gushed Jenna, who was a bit flustered by the birthday wishes. ‘Oh my gosh, I don’t know where to go from there.’

Hoda, 55, was quick to remind her that her husband Henry had stopped by earlier in the day to wish her a happy birthday in a special way.

‘Henry came this morning. He’s gone. He just came by,’ Jenna explained. ‘He wrote me a letter, and he hand-delivered it.

‘We got some good guys,’ she told Hoda, who got engaged to her longtime partner Joel Schiffman while enjoying a romantic trip in Mexico this past weekend. 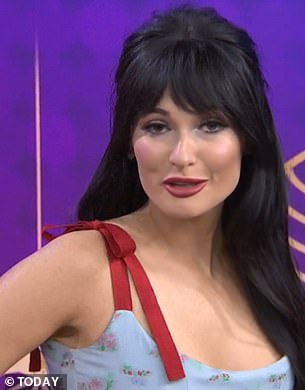 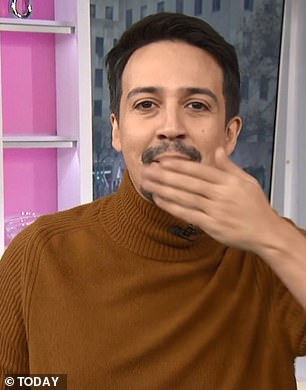 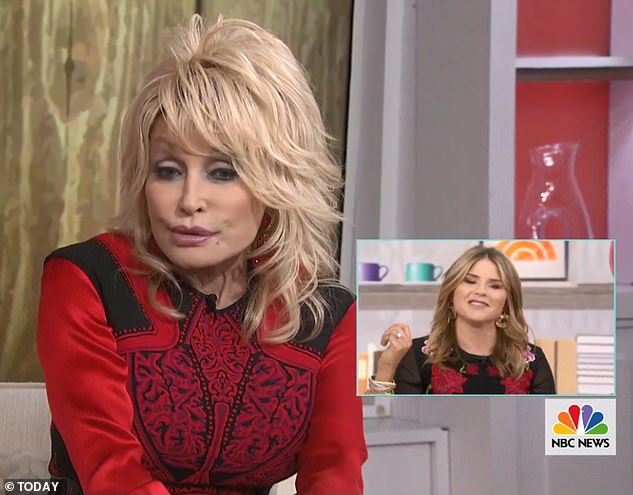 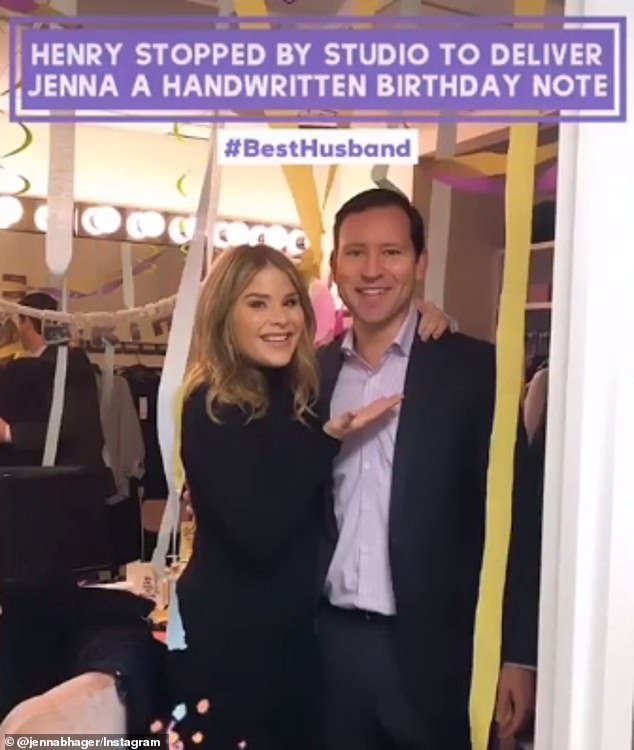 So sweet: Jenna revealed her husband Henry Hager had surprised her earlier in the day with a hand-delivered letter

The surprises kept on coming for Jenna, who was given a one-of-a-kind birthday cake in honor of her turning 38.

Today social contributor Donna Farizan wheeled out a four-tiered cake filled with melted queso cheese, leaving both of the hosts a bit shocked.

‘Wait, what?’ Jenna asked. ‘Are their jalapenos on top?’

Just as she noted that she and Hoda were intermittent fasting, Donna cut into the cake, prompting tons of queso to ooze out and drop onto the floor.

‘I don’t understand,’ Jenna said. ‘This is like a Gusher.’ 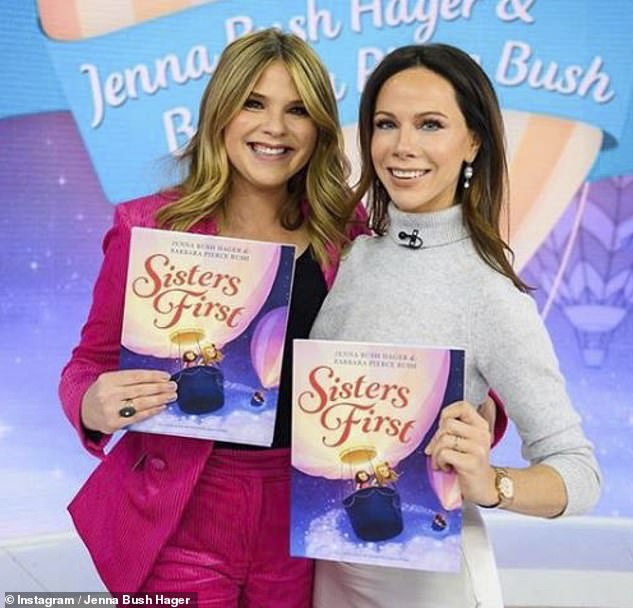 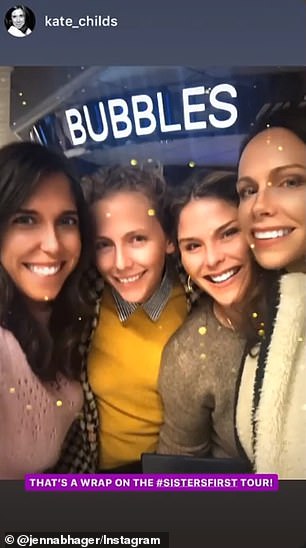 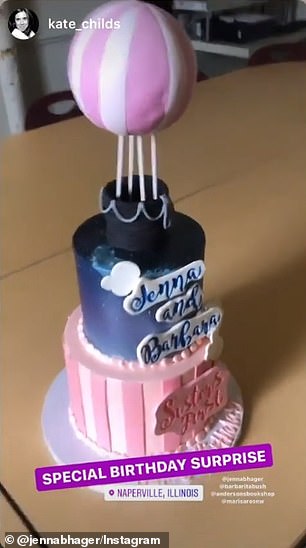 Fun times: Their friend Katie Childs shared photos from their book tour and their birthday cake

The birthday girl had her co-host help her blow out her candles as they made a wish together during the fun-filled segment.

Jenna and Hoda also opened up about weighing themselves on television last week in a pre-taped segment on that aired on Monday.

When they stepped on the scales, Jenna weighed 171.6 pounds after welcoming her third child, Hal, in August, while Hoda clocked in at 157.6 pounds.

Although they said they didn’t think twice about weighing themselves on air, it brought back some difficult memories for Jenna.

‘I, for a second, was transported to when I was like a chubby little girl and found a scale in my mom’s room and weighed myself. And, I, for a moment, was stuck there,’ she said. 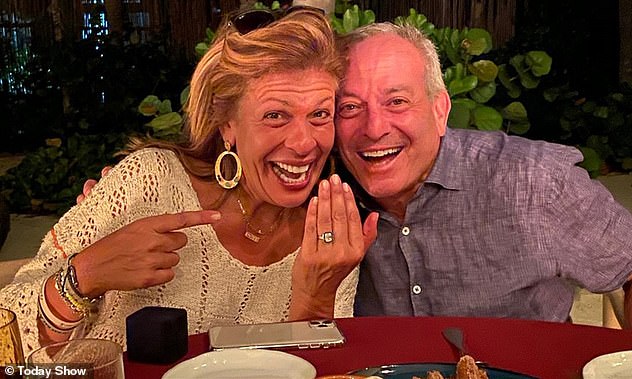 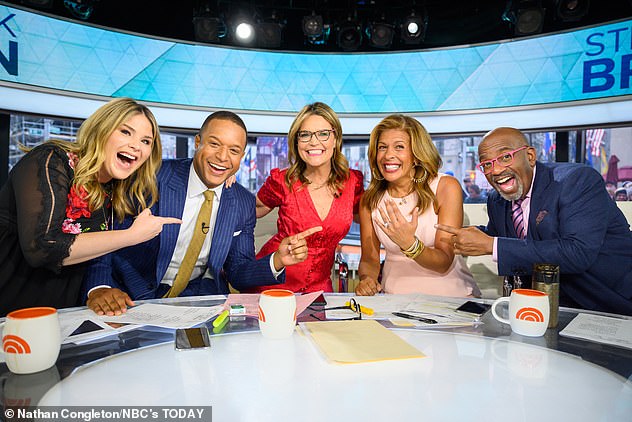 She explained that she hasn’t weighed herself since college nearly 20 years ago and didn’t like ‘that feeling of being reduced to a number.’

Jenna has three children: daughters Mila, six, and Poppy, four, and a newborn son, Hal, who was born in August.

The former first daughter admitted that her parents were a bit shocked that she weighed herself on live television.

‘My mom and dad were like, “Jenna, why’d you do that?” And I was like, “Why are you saying that?” and I think ‘cause they saw that little 10-year-old girl who, you know, felt sad sometimes,’ she said.

‘We want to teach our girls that they’re so much more than the way [they] look,’ she said.