Jenna Bush Hager has recalled how she and her twin sister Barbara Bush got busted for underage drinking when their father, former President George W. Bush, was in office, saying he ended up apologizing to her for telling her she could be ‘normal.’

The Today star, 40, was discussing the paperback release of her book ‘Everything Beautiful in Its Time: Seasons of Love and Loss’ with her co-host Hoda Kotb, 57, on Tuesday’s show when she opened up about her father’s surprising reaction to her citation.

In 2001, Jenna was a college student at The University of Texas at Austin when she was cited for possession of alcohol as a minor and using a fake ID to purchase alcohol within a five-week period.

Jenna Bush Hager, 40, shared her father George W. Bush’s surprising reaction to her getting busted for underage drinking when he was in office in 2001 on the Today show on Tuesday 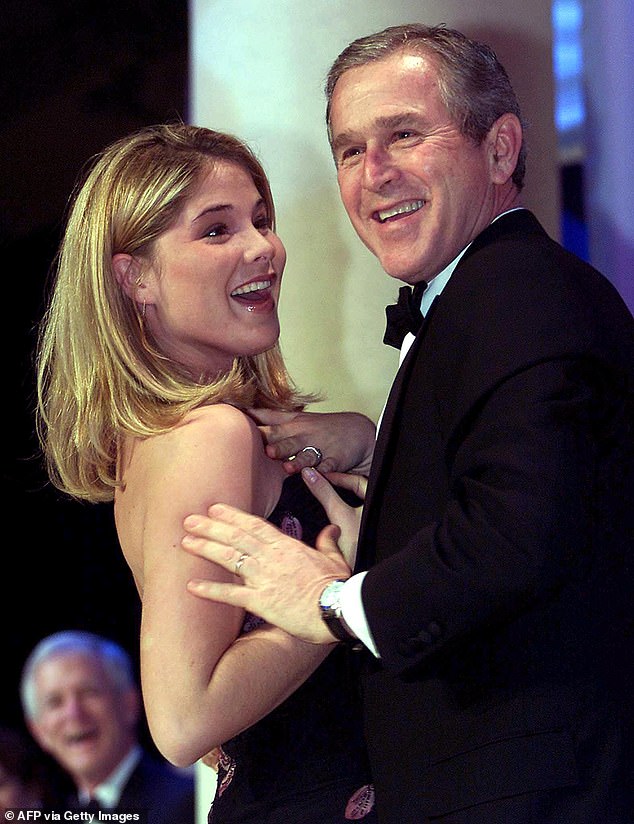 The Today host recalled that when she called her father (pictured in 2001) to tell him about the citation, he ended up apologizing to her for telling her she could be ‘normal’

‘Barbara and I were together. I think we were like 19 and a half, maybe 20, close enough but not allowed [to drink],’ she said of them trying to buy alcohol at a restaurant.

‘The fact that we thought we could do that just speaks to how [our parents] were like, “Oh, you can be normal, it’s OK,”‘ she added, admitting it was a ‘stupid’ thing for her and her sister to do as public figures who were underage.

‘When I called my dad to say, “I’m really sorry… I got this ticket for drinking underage,” he said, “No, I’m sorry.” We did embarrass [our parents], but they never would say that,’ she explained. ‘He said, “I’m sorry, I told you [that] you can be normal, and you can’t. You can’t order margaritas.”‘

Jenna was first picked up by police in April of 2001 for drinking a beer in a club and pleaded no contest to a charge of possessing alcohol underage that same month.

She was ordered to pay $51.25 in court costs while serving eight hours of community service, and she also had to attend an alcohol awareness class.

The next month, Barbara, who was a student at Yale University, was visiting her sister in Austin when they were arrested for attempting to purchase alcohol at Chuy’s, a Mexican chain restaurant.

That came after the manager notified authorities from the restaurant to report that a group of individuals who did not look 21 were ordering alcoholic beverages.

Barbara had already been served by the time police arrived and was charged with underage possession, while Jenna was rejected for using an ID that belonged to someone else who was of legal drinking age. 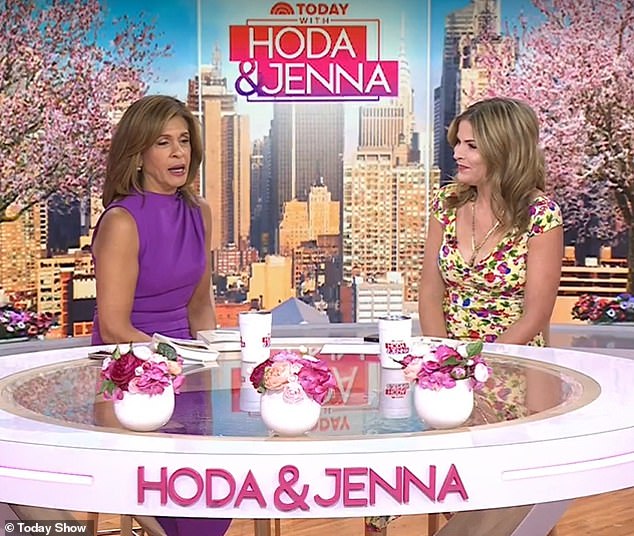 Jenna said her father told her: ‘I’m sorry, I told you [that] you can be normal, and you can’t. You can’t order margaritas’ 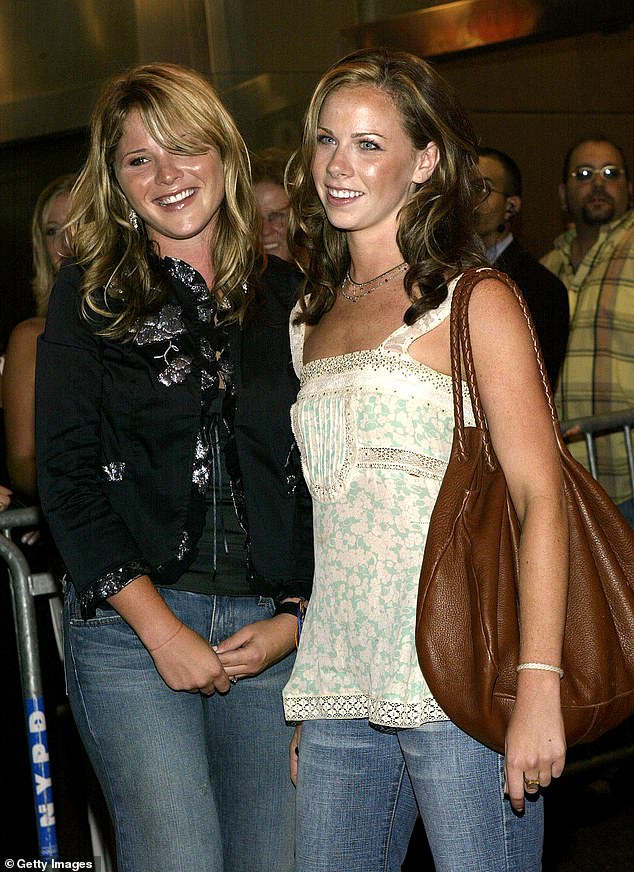 In 2011, Jenna was a student at The University of Texas at Austin when she was cited for using a fake ID to purchase alcohol while out with her twin sister Barbara Bush (pictured in 2004). The incident came five weeks after Jenna was cited for possession of alcohol

The incident landed the two on the cover of weekly magazines.

‘We embarrassed [our parents] — although they never said it — on the world stage. We got in trouble with the law!’ Jenna told Hoda of their public infraction.

Jenna has previously opened about the incident to her co-anchor, telling Hoda in 2020 that she was ‘crying’ when she phoned her father to tell him about her brush with the law.

‘The first time I had a public failure, I called my dad, and I was crying and I apologized to him,’ she recalled. ‘I got a minor in possession of alcohol when I was 19. And I felt embarrassed, and I felt really badly for him because I thought this is going to make him look bad.’

In her 2017 memoir, Sisters First, which she co-authored with twin Barbara, Jenna admitted that she ‘corrupted’ her sibling by taking her out to the restaurant where they tried to order alcoholic drinks – recalling how she attempted to use an ID that had been given to her by an older student at the University of Austin.

‘One of the big things to do at the University of Texas at Austin… was for older girls, who had already turned 21, to give the younger ones their IDs. Of course, the reason why you might want an ID before you were 21 was to drink alcohol,’ she wrote, according to Radar Online.

‘When you’re a college student, you are more preoccupied with who’s having a party or who’s playing beer pong than if your fake ID will land you in the tabloids.

‘I never stopped to consider, “Oh, wait a minute, now that my dad is president, people are going to recognize me.”‘ 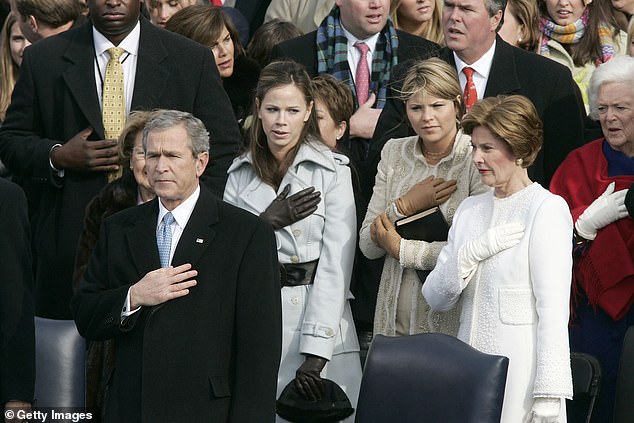 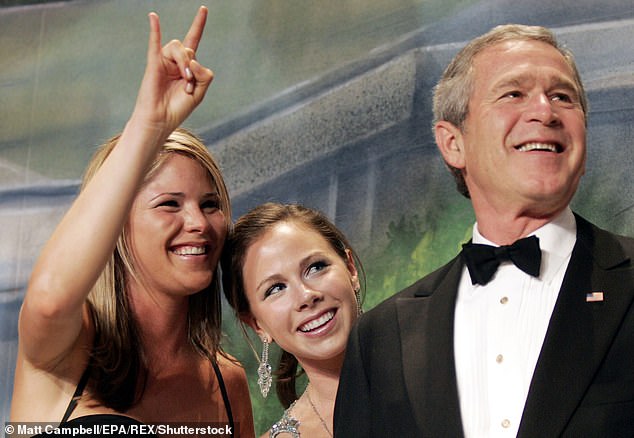 ‘We embarrassed [our parents], although they never said it, on the world stage. We got in trouble with the law!’ said Jenna (pictured with her father and sister in 2005)

She explained that she and Barbara had gone out to Chuy’s with a group of friends, recalling how ‘everyone was ordering margaritas’, prompting the twin sisters to do the same.

When asked for ID, Jenna produced the one that belonged to another student at her college – ‘naively’ failing to realize that the staff at the restaurant would immediately recognize her and know that the ID wasn’t hers.

‘Yes, I was actually that naïve. Knowing me back then, I had probably requested the table for Jenna Bush, party of three,’ she wrote in her book.

‘Even Barbara, the Ivy Leaguer in our group, didn’t stop to consider how much more recognizable we were as our twin selves, two together rather than one.’

Earlier this week, the Today stars kicked off Jenna’s latest book tour with a discussion in front of a live audience in New York City on Monday evening.

They both posted photos from the event on Instagram, with Jenna thanking Hoda for her love and support.

‘So grateful to work with the most giving, dearest friend! Thanks to all of you and @hodakotb who came out on a freezing Monday to celebrate my book out in paperback,’ she wrote.

Hoda praised her co-star in her Instagram post, writing: ‘Beautiful night with my dear @jennabhager. She walks this earth with her heart on the outside for all to see. #everythingbeautifulinitstime.’

She shared a similar sentiment on the Today show on Tuesday, saying it was ‘so beautiful’ to watch Jenna talk about her grandparents on stage. 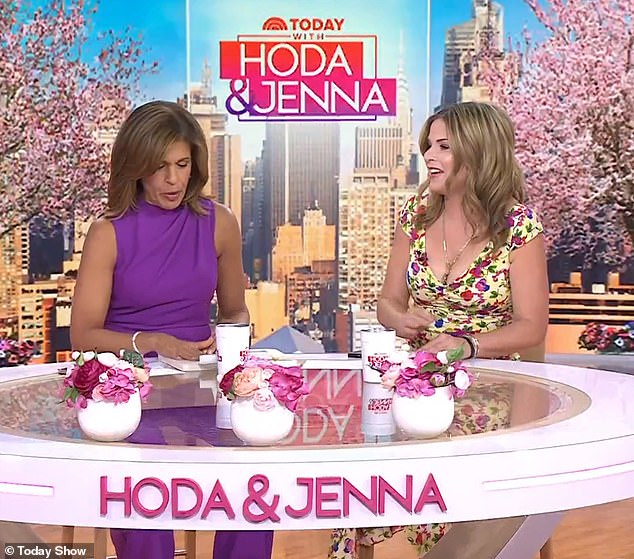 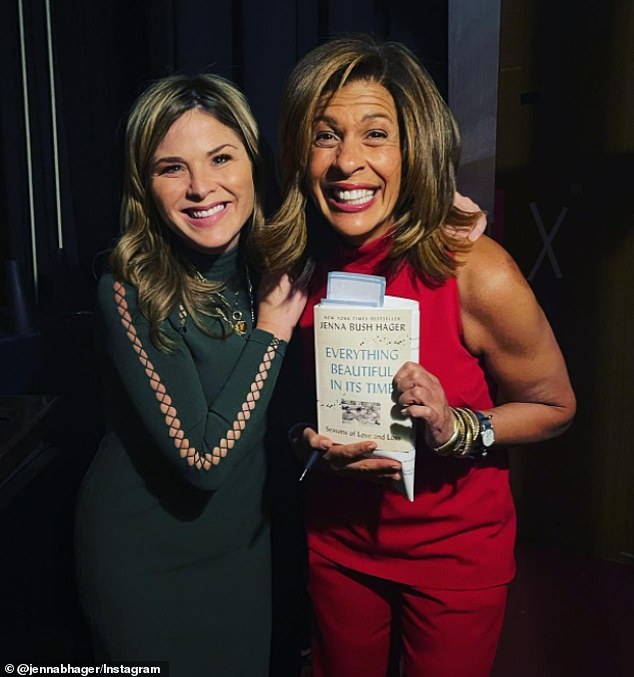 The Today stars kicked off Jenna’s tour for the the paperback release of her book ‘Everything Beautiful in Its Time: Seasons of Love and Loss’ in New York City on Monday evening 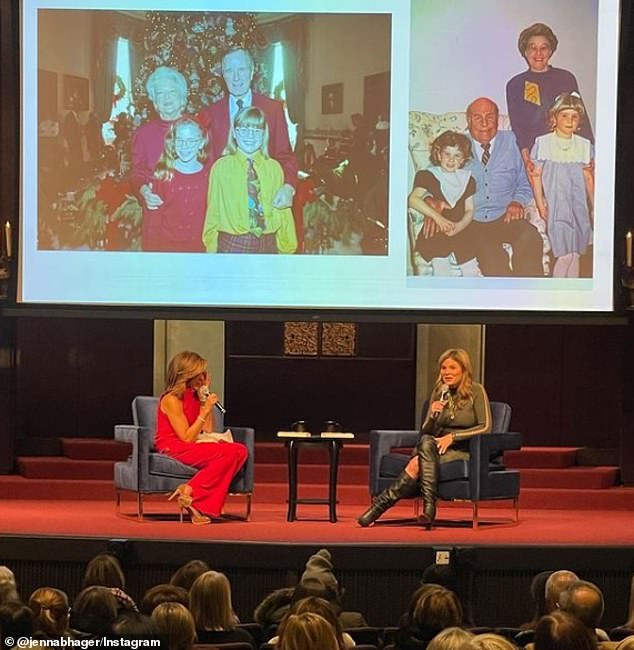 Jenna wrote the book after suffering the loss of three of her grandparents. She explained on the Today show that penning the book was an important part of her ‘grieving process’

‘I wrote this book before the pandemic, before our world was changed in so many ways, and it was about this period in my life where I lost my three remaining grandparents,’ she explained.

‘But I also found out I was pregnant with Hal. I got this job to sit next to you. It was this really beautiful year in my life, but it was filled with both the beauty and then also loss.’

In 2019, she also lost her maternal grandmother and namesake, Jenna Hawkins Welch, the mother of former First Lady Laura Bush. She was 99 when she died.

‘I recommend anybody who’s dealing with grief. Write it down, and explore who these people are to you,’ Jenna advised on Tuesday’s show. ‘That’s what I did.

‘I just thought about my grandparents. I wrote about their funerals, about memories with them, and it was such an important part of my grieving process. I think I really grieved.’