It appeared to be a mini Friends reunion on Tuesday evening at the famed Sunset Tower hotel on Sunset Boulevard in West Hollywood.

Jennifer Aniston and Courteney Cox were seen partying together at an event for Los Angeles based jewelry designer Jennifer Meyer.

The A-list actresses were both in black as they mingled with other guests which included Kate Hudson and Meyer’s ex-husband Tobey Maguire.

I’ll be there for you: It appeared to be a mini Friends reunion on Tuesday at the famed Sunset Tower hotel in West Hollywood as Jennifer Aniston, right, and Courteney Cox, left, were seen partying with Jennifer Meyer, center

Her dirty blonde hair was worn down and parted on the side as she added minimal makeup. A chunky gold Rolex watch sparkled on her wrist as she also wore dainty gold jewelry. 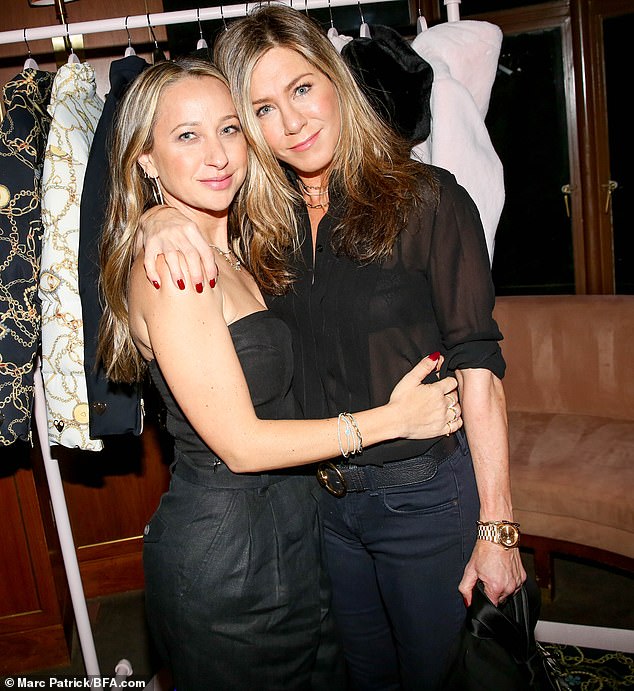 She always nails it: Aniston wore a sheer black blouse that revealed her black bra as she added dark blue denim jeans, a Gucci belt, and to-the-knee boots

Cox had on a black blazer, black shirt, jeans and black boots with her raven hair parted in the middle and worn down.

Friends was on the air for a decade, from 1994 until 2004, and still proves to be a hit on streaming services. 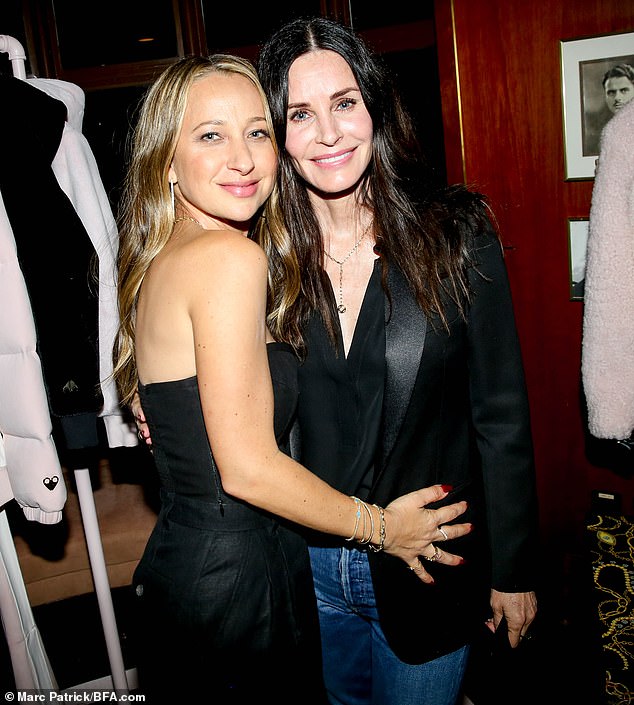 Glam: Cox had on a black tuxedo style blazer, black shirt, jeans and black boots with her raven hair parted in the middle and worn down

Cox and Aniston have stayed good friends since the show ended, often hanging out at each other’s mansions during lockdown.

The event seemed to be festive with free tequila for all; guests sipped on specialty Casamigos cocktails throughout the evening.

Casamigos joined House of Friend and jewelry designer Meyer for the launch of her new collection with luxury fashion brand Moose Knuckles. 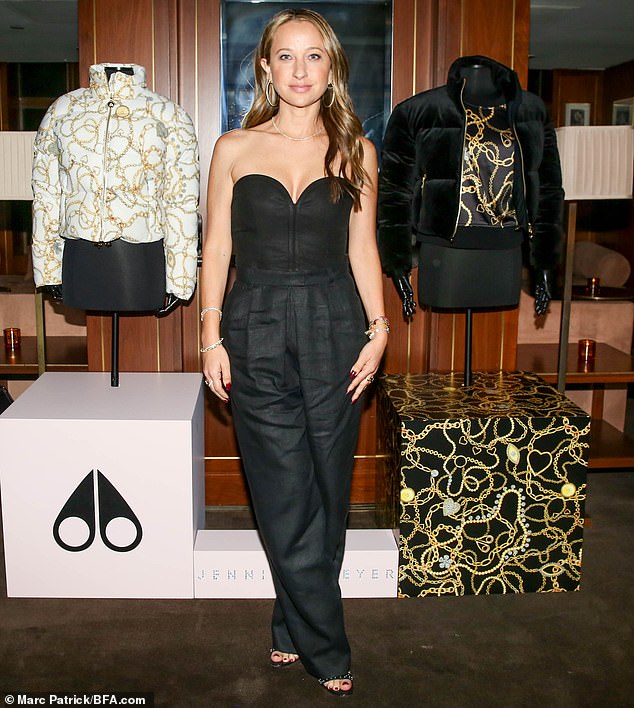 The star of the evening: Meyer also looked elegant as she had on a top with a sweetheart neckline and loose trousers, adding peep-toe heels

Meyer also looked elegant as she had on a top with a sweetheart neckline and loose trousers, adding peep-toe heels.

The 59-year-old actor, who famously played Gunther in the sitcom classic, passed away peacefully at home in Los Angeles on Sunday (24.10.21) morning, after being diagnosed with advanced prostate cancer in 2018 which later spread to his bones.

And the 52-year-old actress, who played Rachel Green, was among those to pay tribute to James. 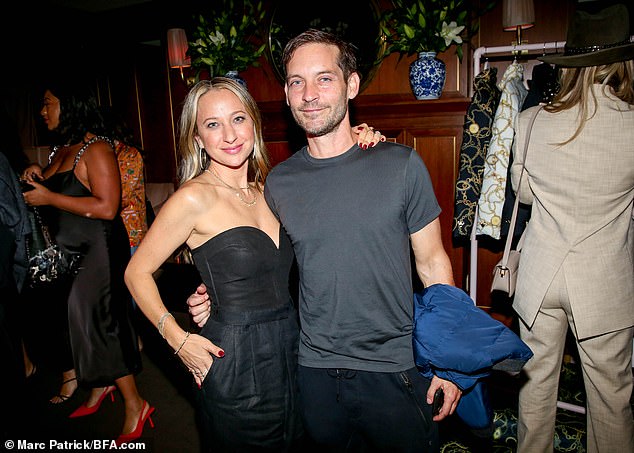 Still good pals: Also there was Meyer’s ex-husband Tobey Maguire. They were wed from 2007 until 2020 and have two daughters together, Ruby and Otis

The Morning Show star shared a clip from the 2004 series finale when Gunther tells Rachel he loves her and admitted the show ‘would not have been the same’ without him.

She captioned the Instagram post: ‘Friends would not have been the same without you. Thank you for the laughter you brought to the show and to all of our lives. You will be so missed #JamesMichaelTyler.’

Monica Geller actress Courteney, 57, wrote: ‘The size of gratitude you brought into the room and showed every day on set is the size of the gratitude I hold for having known you. Rest In peace James.’ 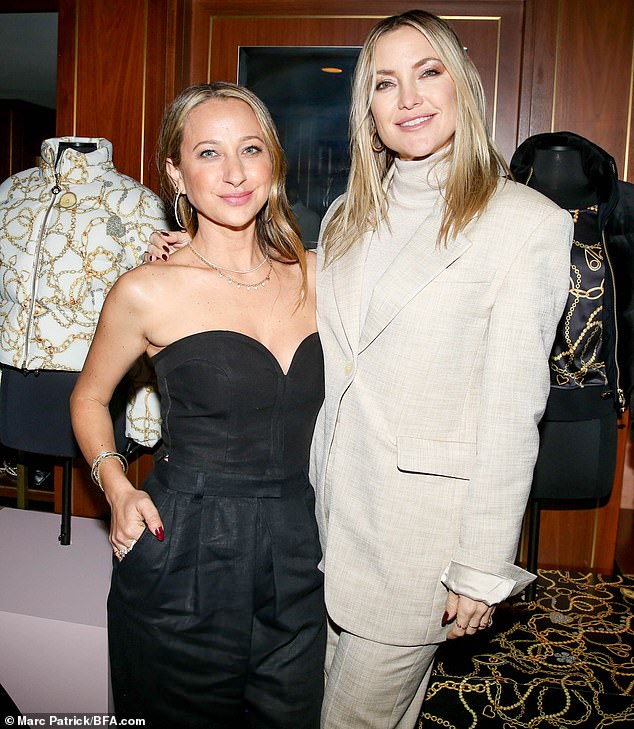 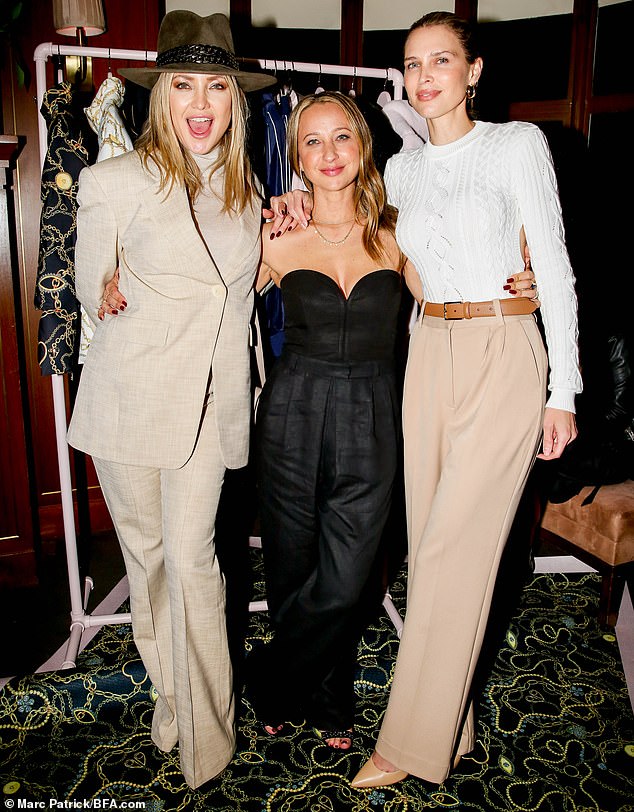 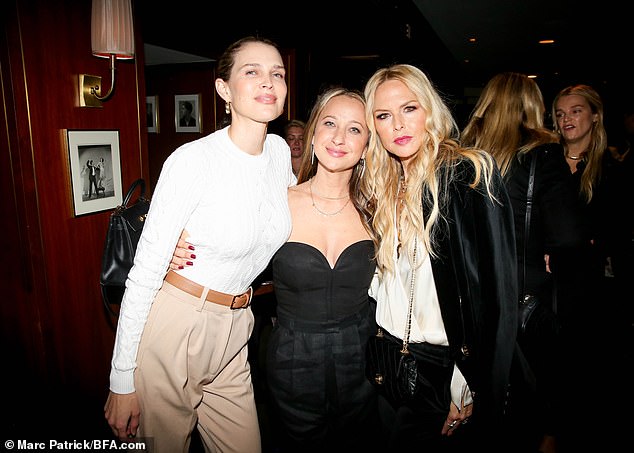 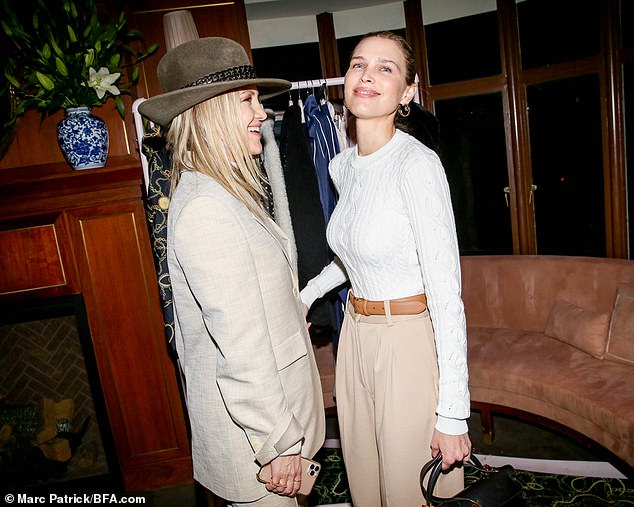 These girls are very close: Kate smiled as she yucked it up with her bestie

A post on the official ‘Friends’ Twitter page read: ‘Warner Bros Television mourns the loss of James Michael Tyler, a beloved actor and integral part of our FRIENDS family. Our thoughts are with his family, friends, colleagues and fans.’

His manager said: ‘If you met him once you made a friend for life. [He] is survived by his wife, Jennifer Carno, the love of his life. 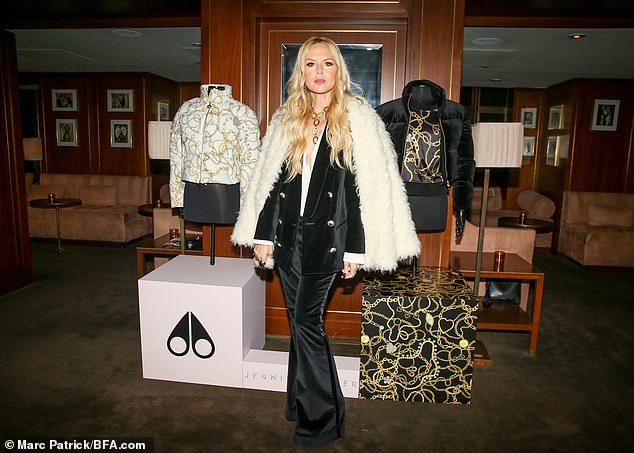 Zoe interesting: Rachel added a fuzzy off white coat over her velvet suit 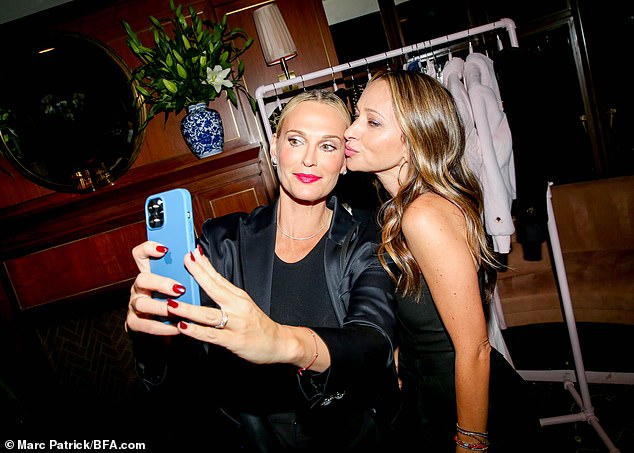 Pucker up honey: Molly Sims wore bright pink lipstick as she took a selfie with Meyer 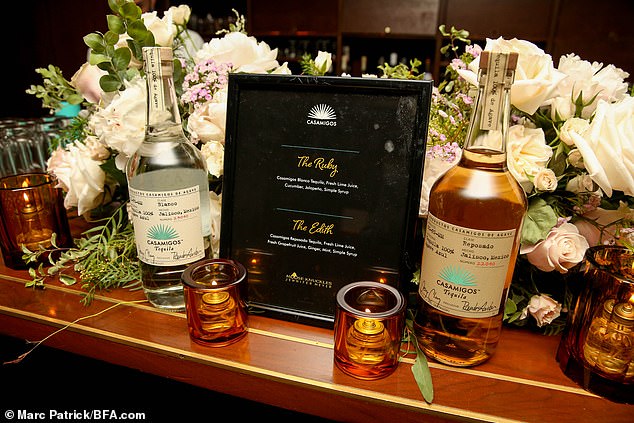 Drink up: The event seemed to be festive with free tequila for all; guests sipped on specialty Casamigos cocktails throughout the evening. The company was launched by George Clooney and Rande Gerber

‘Wanting to help as many people as possible, he bravely shared his story and became a campaigner for those with a prostate to get a… blood test as early as 40-years-old.’

Tyler’s ‘Friends’ alter ego worked as a waiter and manager in New York’s Central Perk coffee house and remains a popular figure among fans of the comedy, despite not having as much screen time as the six main cast members.

His character had a crush on Rachel throughout the course of the show. 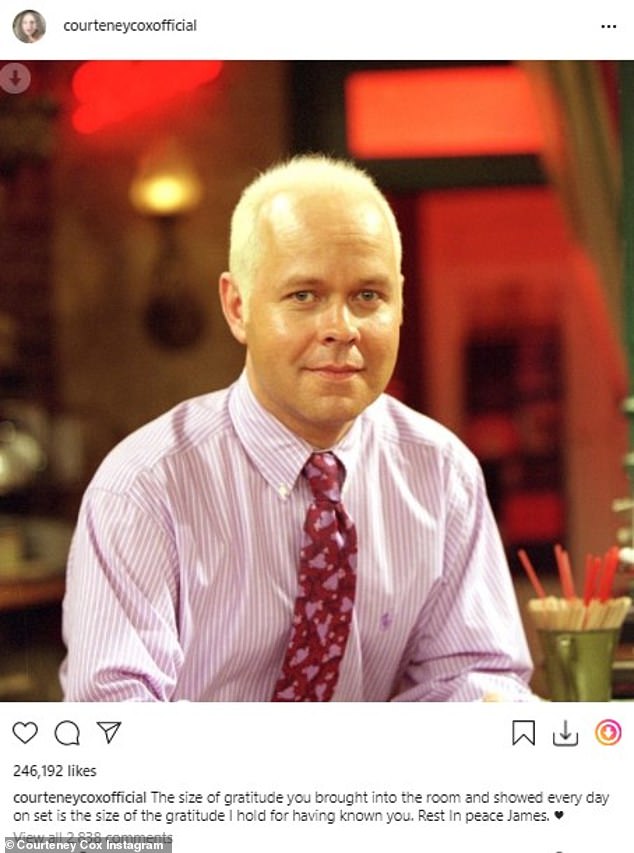 He will be missed: In late October Jennifer and Courteney led tributes to their late Friends co-star James Michael Tyler. The 59-year-old actor, who famously played Gunther in the sitcom classic, passed away peacefully at home in Los Angeles in late October 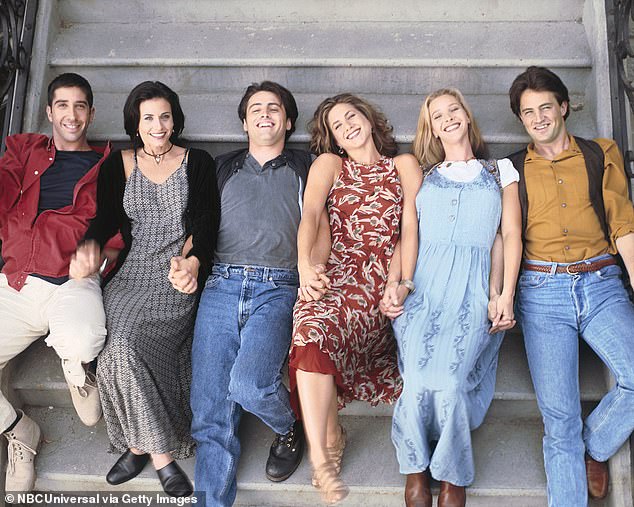 James was absent from the Friends reunion earlier this year and explained that he only appeared via Zoom as he didn’t want to put a ‘downer’ on the show by having to explain his illness.

He said: ‘I wanted to be a part of that, and initially I was going to be on the stage, at least, with them, and be able to take part in all the festivities.

‘It was bittersweet, honestly. I was very happy to be included. It was my decision not to be a part of that physically and make an appearance on Zoom, basically, because I didn’t wanna bring a downer on it, you know? … I didn’t want to be like, ‘Oh, and by the way, Gunther has cancer.”