Dalton Rapattoni had Jennifer Lopez dancing in her seat on Wednesday as the second half of the top 24 singers battled for a place in the next round of American Idol.

J-Lo branded the 20-year-old singer ‘as pretty as can be’ and screamed his name in excitement following his soulful rendition of Billy Idol’s classic hit Rebel Yell.

Clapping her hands in the air, she said: ‘I don’t care about anything apart from that made me feel something.

Felt something: Jennifer Lopez told American Idol singer Dalton Rapattoni that he was ‘pretty as can be’ after his rendition of Rebel Yell

Harry Connick Jr. told Dalton, from Dallas, Texas: ‘It was a phenomenal performance. It was a great interpretation of that song. You sang the lyrics. It was powerful. I thought it was absolutely tremendous.’

Keith Urban, who sang along throughout Dalton’s performance, added: ‘You never disappoint. I know that you’re going to do something with a song that we know but you’re going to Dalton-ize it. I love that you’ve got your own genre. It’s very cool.’ 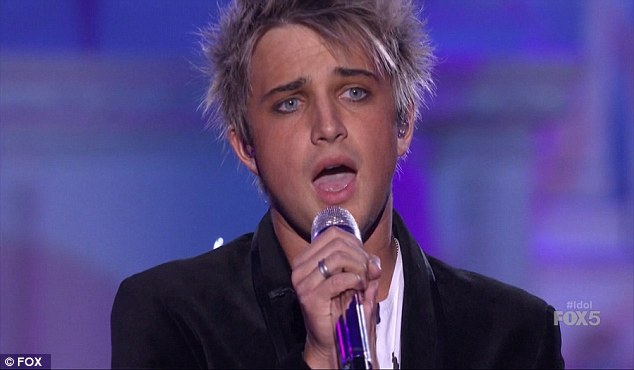 Own version: Dalton put his own spin on the Billy Idol song 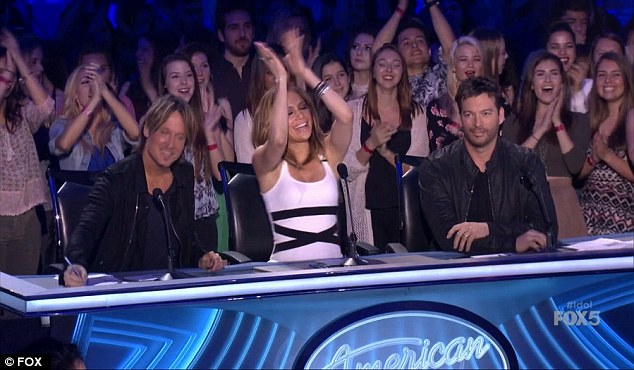 Dancing along: Jennifer danced in her seat as Dalton performed 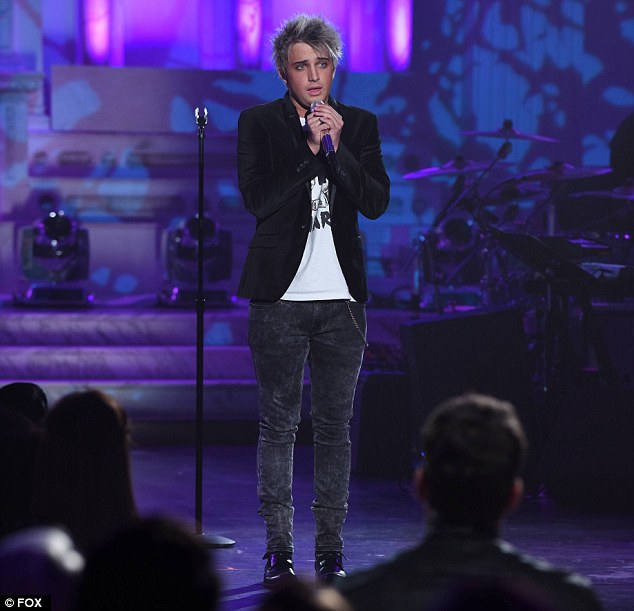 Original voice: Dalton has been impressing the judges with his radical reworkings of popular songs

The show saw 12 contestants perform solo songs in front of the judges and a packed audience at the Vibiana venue in downtown Los Angeles.

With five hopefuls set to be sent home, the stakes were high and Harry Connick Jr. made it clear that he expected perfection.

The American singer was booed on several occasions by the crowd after giving harsh critiques to the contestants on stage. 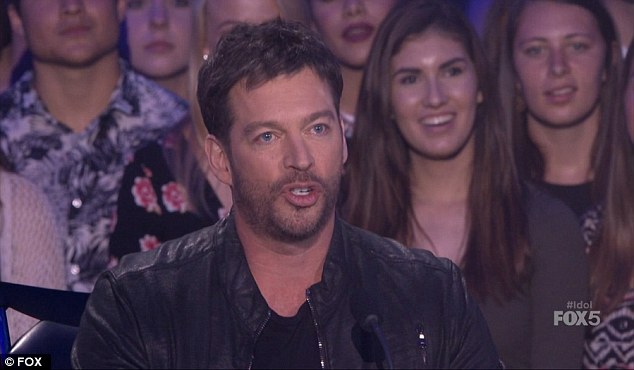 Jennifer, softening the blow, remarked: ‘It was the most comfortable I’ve seen you on stage and it was poignant that you were singing ‘’I’ll be me”.’

Harry also had harsh words for quirky Jenn Blosil, telling her that her performance of the Justin Bieber hit Sorry was ‘extremely out of tune’. 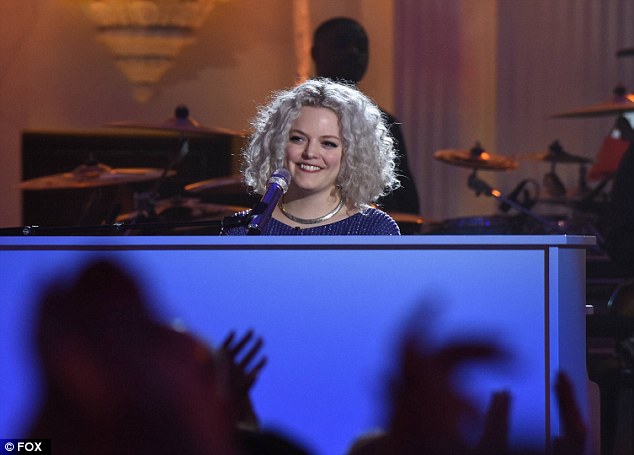 Out of tune: Jenn Blosil was criticised by Harry for being out of tune while singing Sorry by Justin Bieber

After admitting that she was a ‘breath of fresh air’, Harry said: ‘I expected everybody to applaud right when they did because that was the first time in the song when you started to sing in tune. It was extremely out of tune. It wasn’t very good for me.’

Jennifer conceded that Blosil’s song had been ‘shaky at the beginning’, while Keith encouraged: ‘Why I responded to that same part of the song the audience did wasn’t just because there was an immediate sense of familiarity, but for me that’s when there was a real sense of what you were trying to do with the song. I really commend the originality that you approach these things with.’

Adam Lasher from Danville, California, was also on the receiving end of some negative remarks from Harry after his version of Black And Gold by Sam Sparro. 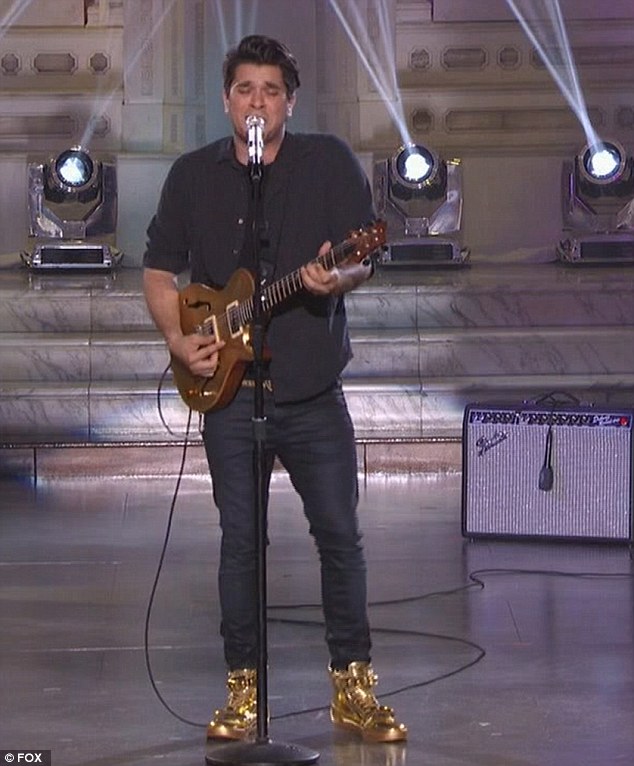 Remarking on the song’s shuffle beat, he said: ‘There’s a certain intensity that you have to play with when you’re playing a shuffle. It’s your job to set the groove for them. You need to drive them. I felt that you were a buoy on an ocean and I just felt you were wishy washy on that.’

Surprised by the crowd’s silence after his remarks, he quipped: ‘Why didn’t they boo? Why didn’t you boo that?’

Keith and Jennifer joined Harry in his criticism of Lasher and expressed disappointment over his choice of song. 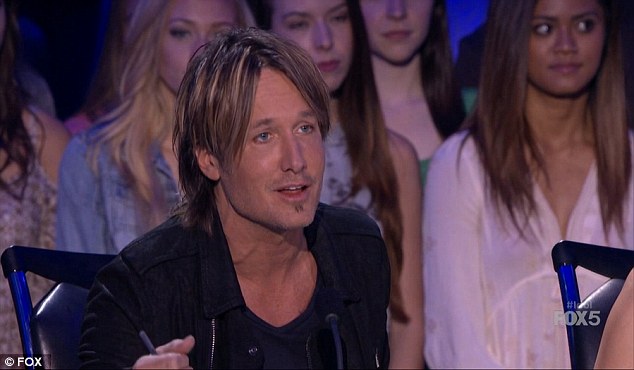 ‘You have to figure out what that is that sets you apart from everyone else,’ Keith  said.

Jennifer added: ‘We know what you’re capable of, but the song choice is so important. I couldn’t even get into the melody of it or anything. You have to make sure that people are going to go along on that ride with you.’

The judges were more complimentary towards 23-year-old Shelbie Z, with Jennifer commenting on her amazing vocals and Harry branding it a good performance. 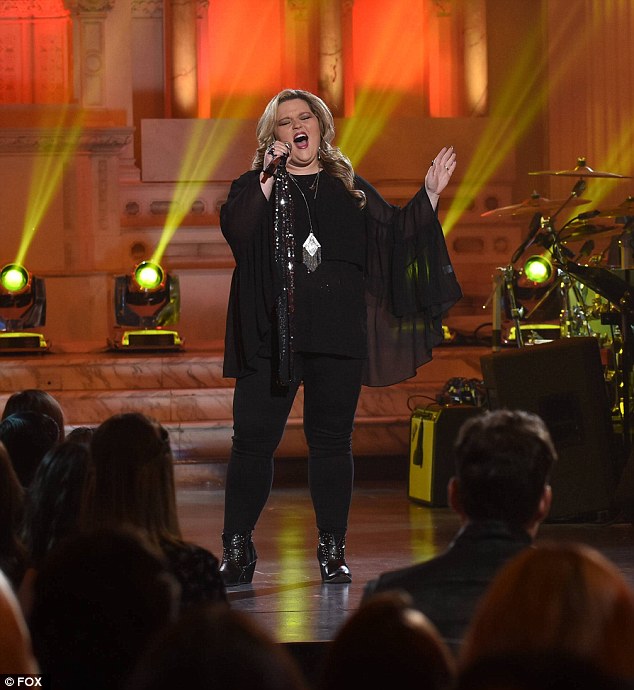 Nailed it: Shelbie Z was praised by the judges for her energetic performance

‘You look great, you sound great, you’re very comfortable. The interesting thing for me is going to be how you stack up to everyone else. But all around I thought it was a solid performance,’ Harry said.

Manny Torres, however, was advised to connect more with the audience following his rendition of Adventure Of A Lifetime by Coldplay. 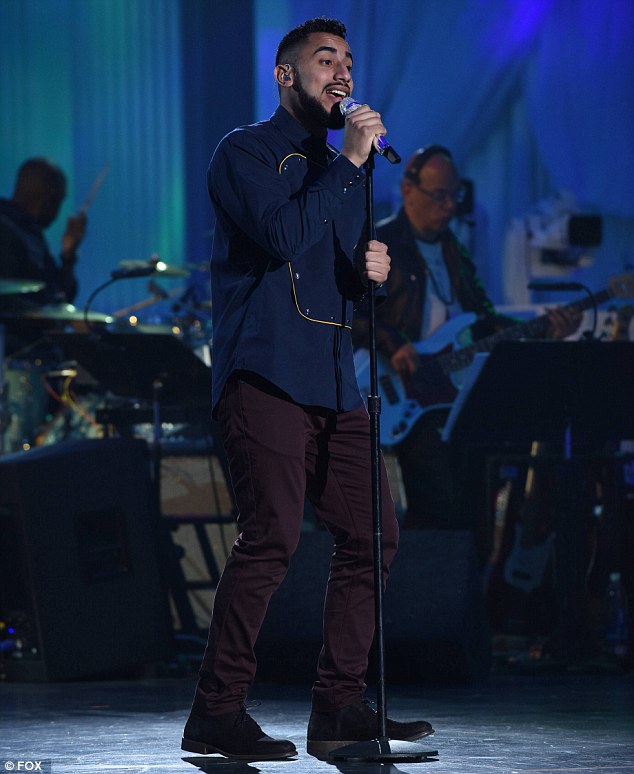 Worked it: Manny Torres worked the camera during his performance

Keith added: ‘I love the way you work the camera. I don’t think that was a good song for your vocal strengths, but it suited your spirit very well.’

While 16-year-old Amelia Eiesenhauer performed Avicii’s Wake Me Up When It’s All Over, CJ Johnson opted for I’ll Be by Edwin McCain and Lee Jean chose Runaway by Ed Sheeran.

Trent Harmon, from Amory, Mississippi, performed What Are You Listening To by Chris Stapleton, while 15-year-old Tristan McIntosh sang Good Girl by Carrie Underwood. 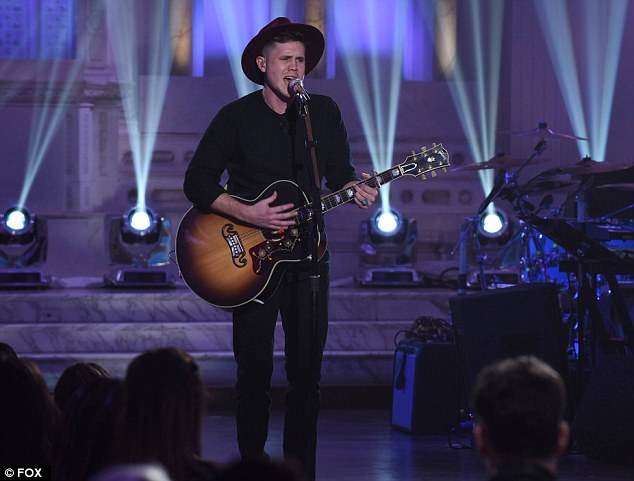 Strong voice: Trent Harmon showed his range with his rendition of What Are You Listening To 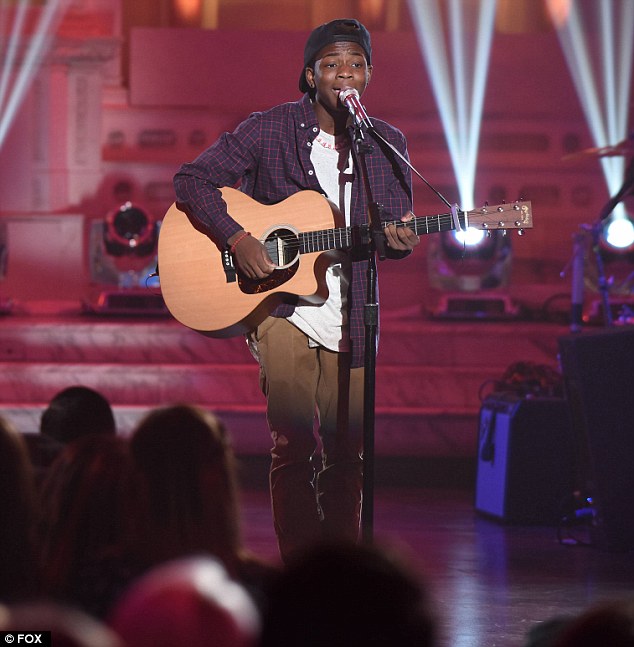 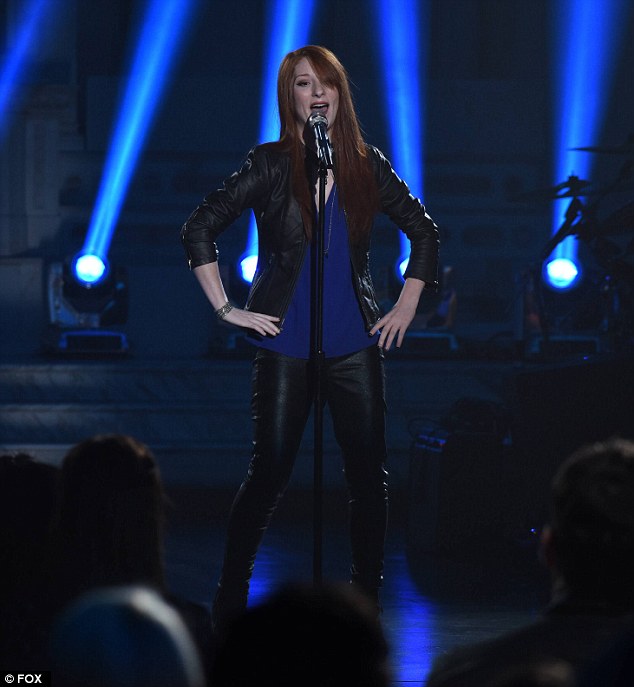 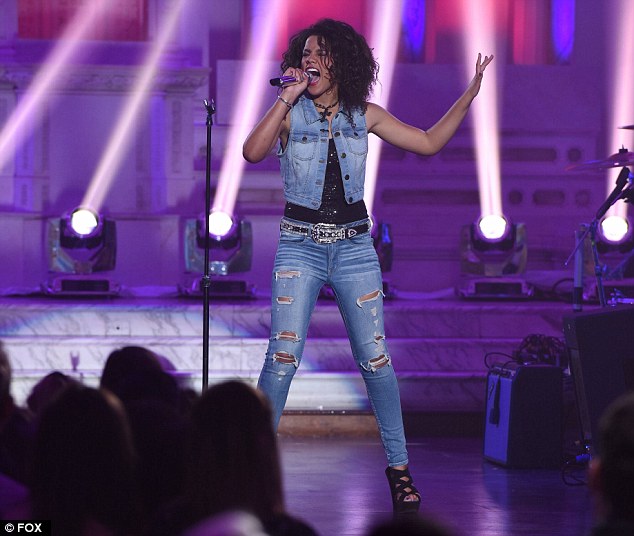 Olivia Rox from Agoura Hills, California, closed the show with a rousing rendition of Confident by Demi Lovato, which had Keith on his feet at the end of the song.

‘And the show starts now,’ he exclaimed. ‘It was so good. The tone of your voice is just… lucky girl. You got given an amazing gift. So good.’

Harry praised: ‘That’s the kind of music you should be doing. I thought it was really strong. The only nitpicking I would do? Make the rhythm paramount. It’s another shuffle, ironically enough.’

Jennifer added: ‘If we’re going to give you some advice, because your voice is so strong, you have to really get into your inner rock chick to pull that off.’

The contestants will take to the stage again on Thursday night to perform duets with Idol alumni including Jordin Sparks, Chris Daughtry, David Cook and Kellie Pickler. 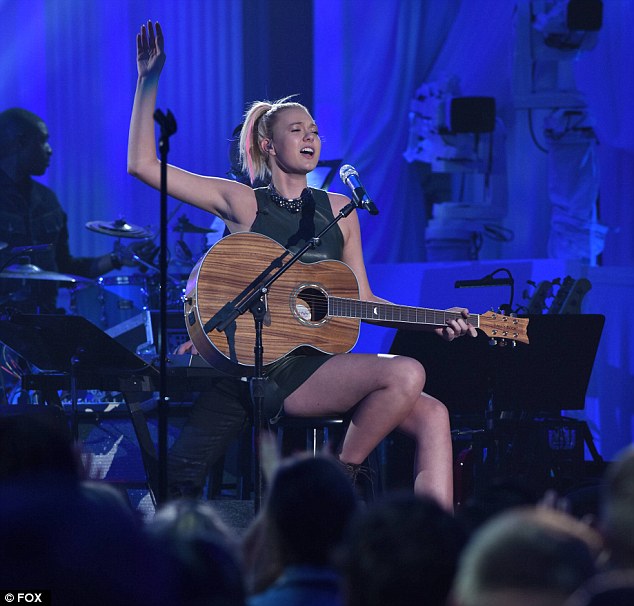