Jennifer Lopez put her sensational figure on display as she modeled a figure-hugging dress on Monday.

The 52-year-old singer slipped her curves into an eye-catching dress with a midriff peephole as she shared radiant selfies on Instagram.

She shared the snaps to plug her JLo Beauty brand, following a fun-filled weekend with on-again beau Ben Affleck and their kids.

Working it: Jennifer Lopez shared sexy selfies in a figure-hugging neon dress… after enjoying a family day out with beau Ben Affleck

Lopez posed up a storm in her palatial Bel Air home as she lit up social media with several posts including selfies.

She led with her ‘JLo glow’ as she showed off dewy skin and glossy lips with light eye makeup accentuating her brown eyes.

Her caramel locks were blown out straight and clipped back in the center and she wore hefty diamond studs and two large diamond rings.

The body-hugging dress was knit and long sleeve and featured a light collar with buttons cascading down the center. 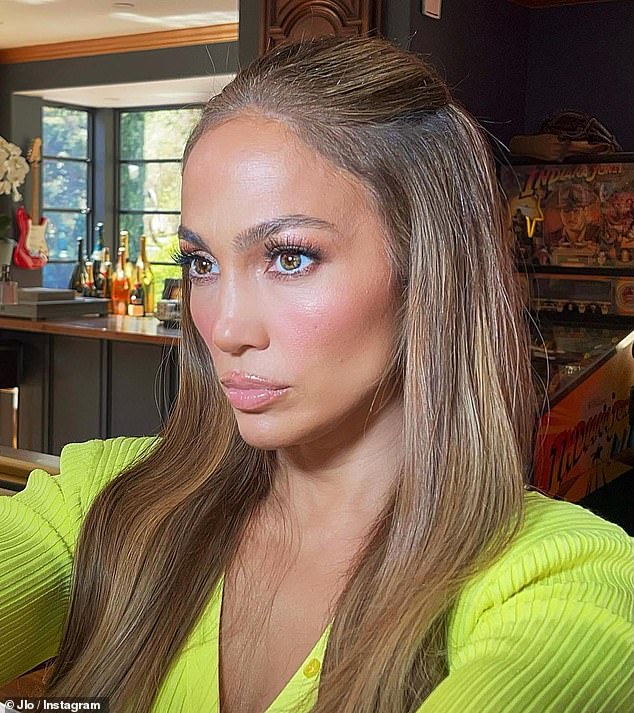 Radiant: She led with her ‘JLo glow’ as she showed off dewy skin and glossy lips with light eye makeup accentuating her brown eyes 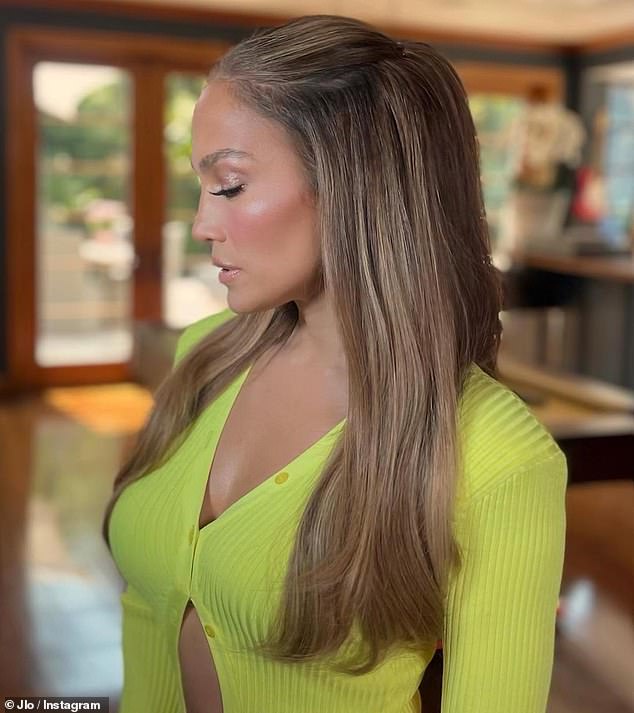 Her way: And flashing a hint of skin she chose to leave the two bottom buttons undone which exposed a tad of her abs

Flashing a hint of skin she left the two bottom buttons undone which exposed a tad of her abs.

‘My favorite color is neon anything. Did a fun lil thing for @sephora and @Jlobeauty coming soon,’ she captioned the trio of glowing shots.

In more images shared to her stories, she showed off the entirety of her dress which hugged her famous bottom and flowed out just below her calves.

The Hustlers star completed the striking ensemble with clear toed heels and gave her followers a close up look at her gym-honed frame. 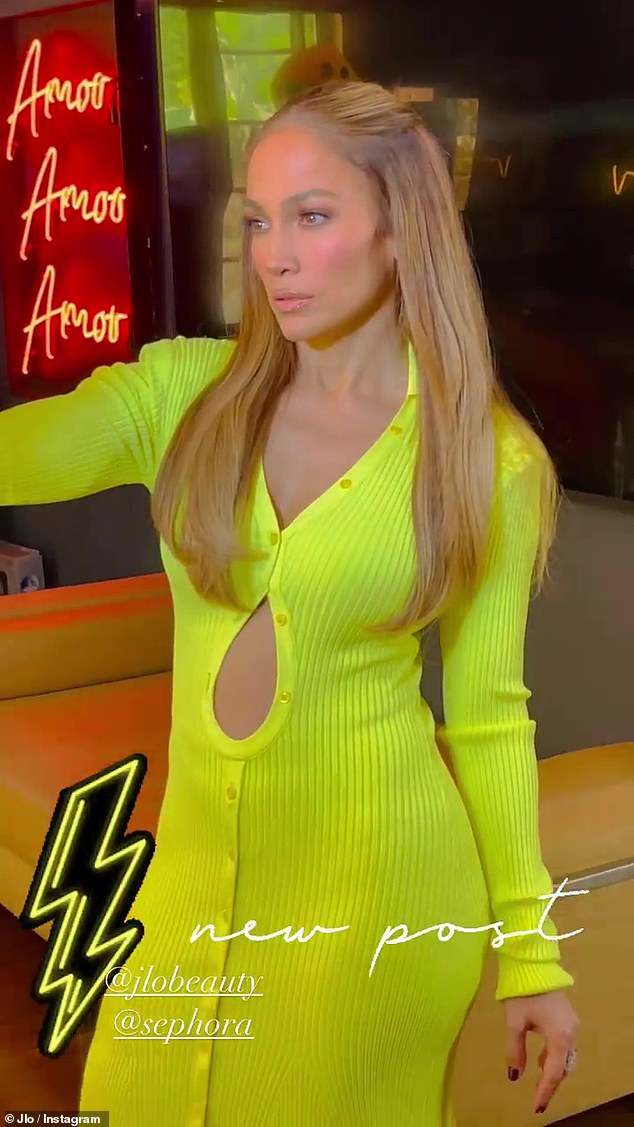 Full look: On her instagram stories she gave a full view of the body-hugging dress which was knit and long sleeve with buttons cascading down the center 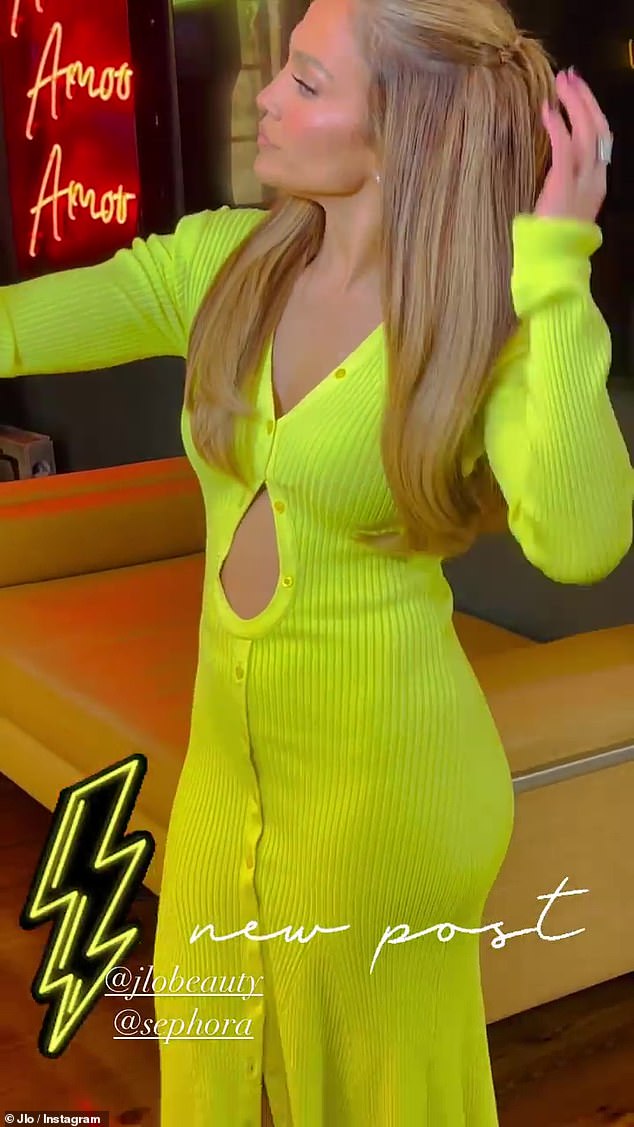 Killer curves: A video showed off her gym-honed backside as she teased a new post announcing her latest beauty project 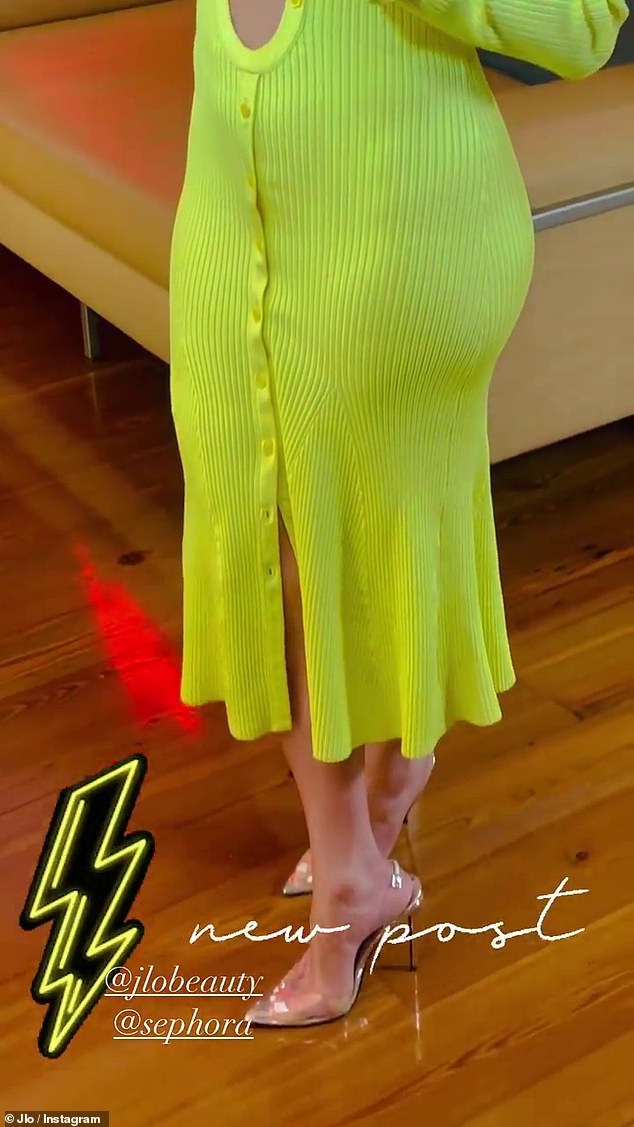 Completing the look: Jennifer opted to go with an understated clear pump to not distract from her bright colored neon dress

Jennifer’s sexy shots came after she spent the weekend with Ben and their children.

The singer shares twins Max and Emme, 13, with her ex-husband Marc Anthony, while Ben has kids Violet, 15, Seraphina, 12 and Samuel, nine, with ex-wife Jennifer Garner.

The group looked like the picture perfect blended family as they spent Saturday the at Magic Castle before watching a Broadway production. 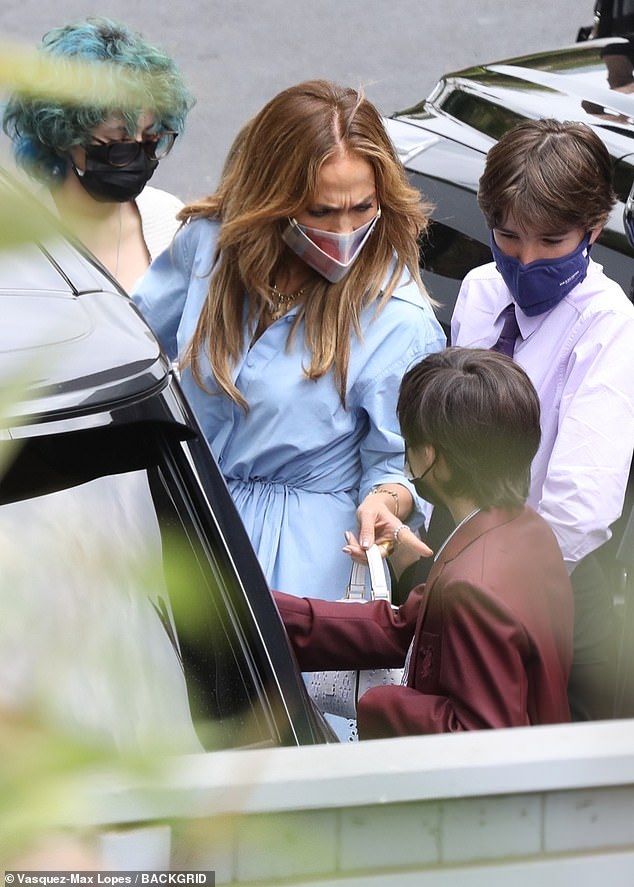 Fun times: Jennifer’s sexy shots came after she spent the weekend with Ben and their children (pictured with daughter Emme and son Max and Ben’s daughter Seraphina) 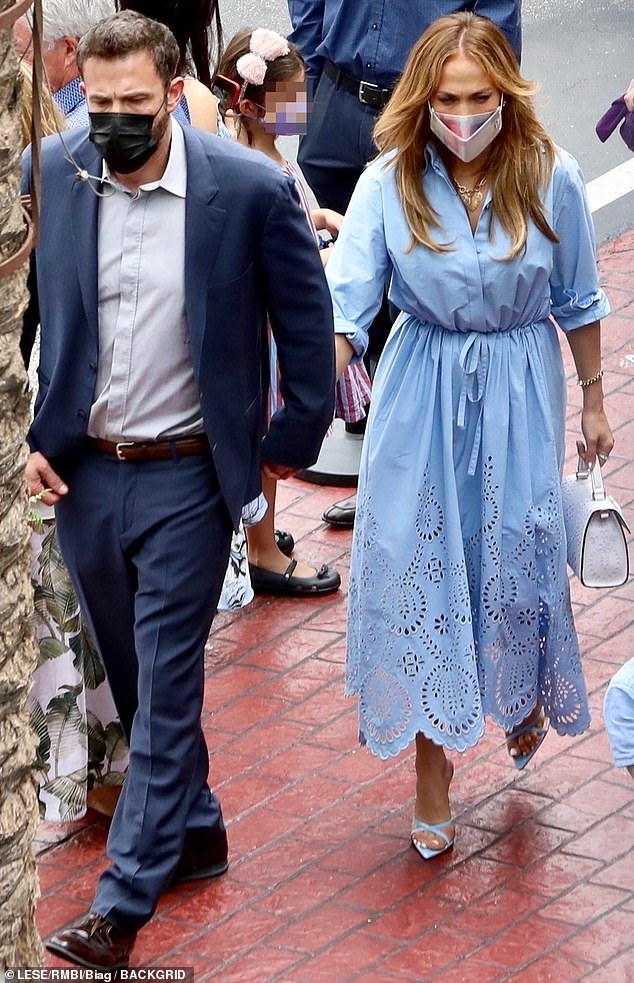 Thick as thieves: Ben and Jennifer continued to encourage quality time spent between all five of their children

In June a PEOPLE source said: ‘This is not a casual relationship. They are taking it seriously and want it to be long-lasting,’ adding that they had had conversations about the future.

In 2002 Affleck had popped the question with a 6.10-carat pink diamond engagement ring by Harry Winston, which cost a reported $1.2 million.

It is estimated to have climbed in worth today for anywhere from $12 million to $15 million.

The pair officially broke things off in 2004 and she ended up marrying Marc Anthony — with whom she shares her two kids — later that year, before getting engaged to Alex Rodriguez in March 2019, where he proposed with a $1.4 million, 15-carat emerald-cut diamond ring.

Over the weekend, Lopez continued to push her relationship with Affleck, forward as they brought their kids to two different outings.

On Friday August 20, she and the Good Will Hunting actor took his two daughters: Violet, 15, and Seraphina, 12, along with her twins: Max and Emme, 13, to a production of Hamilton at the Pantages Theatre in Hollywood.

And on August 21, the duo were seen with their joint brood as they took a fun-filled trip to the Magic Castle — an invite-only/members-only magic club.

The duo have also been spotted checking out a series of houses together — including a $65 million Beverly Hills home most recently. 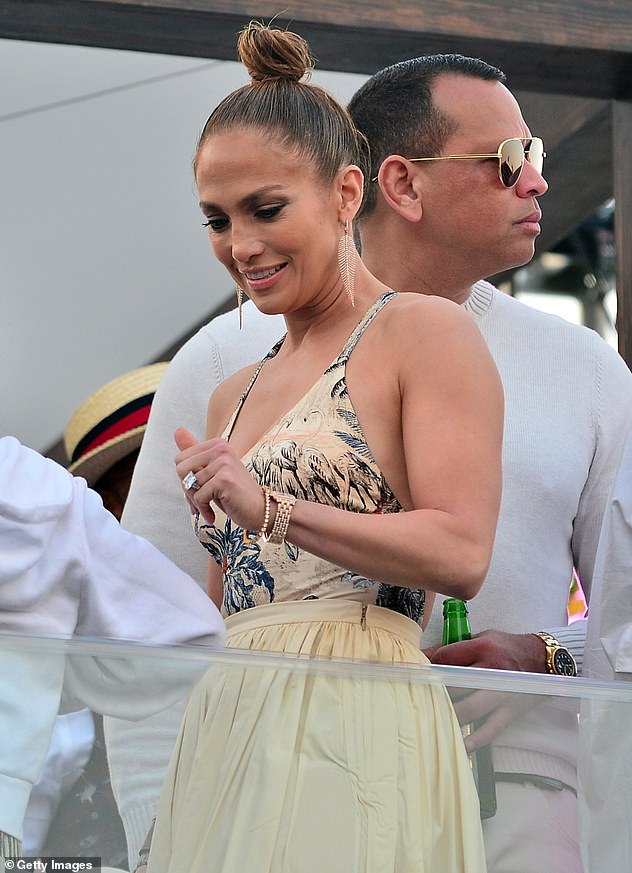 A-Rod: In 2019 Alex Rodriguez popped the question with a $1.4 million, 15-carat emerald-cut diamond ring but the pair called off the two year engagement this past spring; pictured January 2020