‘Hallo! Yes you my friend! Do you want some drugs?’ said a cheery teenage narcotics salesman.

‘No!’ I said, standing in the sunshine outside Marseille St Charles railway station contemplating the city rooftops while waiting for a train.

Tucked inside my jacket pocket was a 30-day (continuous) Eurail pass. Riding the rails across Europe for a month, alighting and disembarking on a whim, was a long-cherished dream.

In another pocket was a 30-day supply of antidepressants. Pills and a month on rails across Europe, I hoped, would see off a recent touch of the blues. It was my 60th birthday.

I climbed aboard the next train to Barcelona, slung my bag up on to the luggage rack and settled in to a sunny window seat. A whistle blew and we were moving, carving a smooth, curving passage through low-rise suburbs.

If performance is three-quarters of character, the elderly French train conductor had made it his entire life’s mission. I showed him my Eurail pass in its blue case and he bowed at the waist. ‘Et bon voyage, Monsieur!’ he said.

The TGV (France’s high-speed rail service) was a flying monster, hugging the French Mediterranean coast. For half an hour, we sped along a narrow, invisible causeway, the sea on our left, a huge freshwater lake on the right.

The French frontier was a blur as we shot across at 200mph. I stepped down from the train an hour later at Barcelona Sants railway station.

Twenty minutes after that I was pressing the bell of the youth hostel I’d chosen at random on the Hostelworld app. 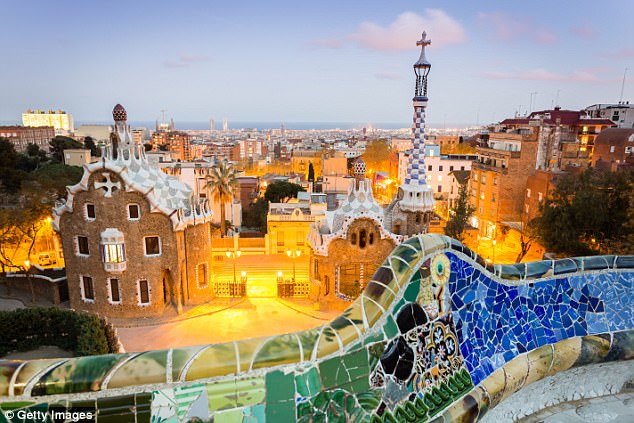 The Peruvian manager checked me in and began psychoanalysing me. He had spotted my problem the moment he saw me, he said. How old was I?

‘Well, at 60 years old,’ he said, ‘isn’t it about time you stopped pretending to be somebody you’re not?’

Barcelona’s youthful, self-confident, socially liberal vibe reminded me of Amsterdam, only the pace was brisker, the skies cleaner, the architecture funkier.

It crossed my mind that I could tear up my rail pass and live there. But on the third morning, stricken with my third hangover, I climbed aboard an early morning commuter train to Alicante.

I considered the Peruvian sage’s words of wisdom all the way there.

The resort of Alicante is a showcase of every hideous, low-rise architectural vogue since the Seventies. I loved it. A glass of beer costs €1 and the people couldn’t be nicer. You can be yourself there.

I slept two nights at a youth hostel, where I shared a bunk with a polite young South Korean man who wore monogrammed pyjamas to bed. Did he think I was trying to be someone I was not, I asked him? He regarded me warily and said I seemed OK. 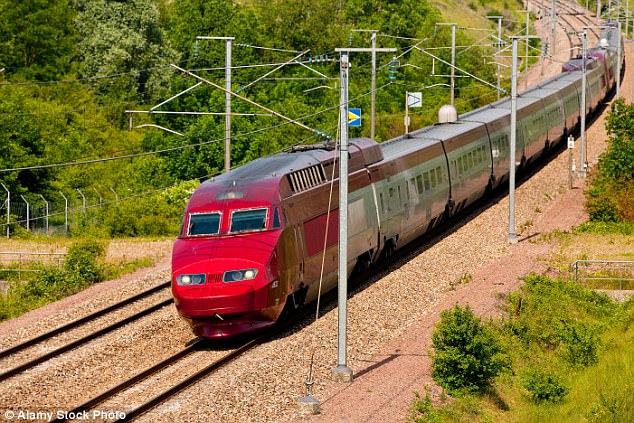 High velocity: Jeremy snaked along the French Mediterranean coast aboard the TGV

A bus ride was necessary to complete the journey down the east coast of Spain.

The south-eastern city of Almeria is the driest and hottest in Europe. From there, the train snaked across the snow-capped Alpujarra mountains to Granada, and from Granada across a flat plain to Seville.

At the hostel in Seville, I slept in a room with four permanently hungry, fractious black women from Detroit.

‘You’re from England, right?’ said one. I admitted it.

‘Is everyone in England as nuts as you?’ she said.

In the morning we were woken by the sonorous bells, right next door, of the largest gothic cathedral in the world.

‘Holy s***!’ said the one lying on the mattress above me.

After Seville, by now feeling quite the wandering nomad, I went to Madrid, Zaragoza and back to Barcelona.

I returned to the same hostel, where the Peruvian amateur psychologist said he approved of how chilled and authentic I had become. As a reward, he took me to a reggae night in a packed dance hall.

The next day, I went to Milan. I had thought Barcelona was sophisticated, but Milan made it seem like Truro.

I ordered an Aperol Spritz and it came in a glass as big as my head.

The waiter who delivered it groaned at the weight of the glass as he placed it on the table before me. I assumed it was a joke, but no, he’d just had a massive workout, he explained, and his arms were aching.

After Milan, I went to Como, then back to Milan, then I took a direct fast train to Marseille, where I called it a day with another week still to run on my rail pass.

My box of antidepressants was unopened and I felt more solidly cheerful than I did when I left.

Train passes available at interrail.eu/en. Price based on route.