Jeremy Corbyn ally calls for equality watchdog to be ABOLISHED

A Jeremy Corbyn ally called for Britain’s equality watchdog to be abolished after it announced it was probing anti-Semitism claims in the Labour party.

Huda Elmi, a member of Labour’s ruling NEC, said the Equality and Human Rights Commission was a ‘failed experiment’ and should be scrapped.

The Momentum activist’s comments came after the EHRC said Labour may have ‘unlawfully discriminated’ against Jewish people.

Labour said it will co-operate fully with the Commission, but said the party rejects ‘completely’ any suggestion that it has acted unlawfully.

Huda Elmi (far right, with Jeremy Corbyn in 2016), a member of Labour’s ruling NEC, said the Equality and Human Rights Commission was a ‘failed experiment’ and should be scrapped

‘If tomorrow it were to cease in existence, most of the people it was created to support wouldn’t even notice.

‘We need to abolish it and bring back separate, well resourced governmental bodies for each equality strand!’

She later clarified that she supported Labour’s co-operation with the EHRC and had long opposed the watchdog because ‘different equality agendas are best dealt with individually’.

‘The Labour Party has said it will fully cooperate with the EHRC, and I completely support that approach,’ she said.

Her comments sparked a fierce reaction from Labour MP Lilian Greenwood, who said: ‘Am sure there are legitimate concerns about the EHRC, after all it has suffered devastating cuts under this Tory Government. But this is…well… words fail me.’

Liberal Democrat peer Lynne Featherstone said: ‘This is a world gone mad. Huda – dissing the EHRC because it says something you don’t like is fascism. Shame on you!’

Labour’s deputy leader Tom Watson said he was ‘deeply saddened that the EHRC feels there is sufficient evidence to investigate Labour for breaches of discrimination law’. 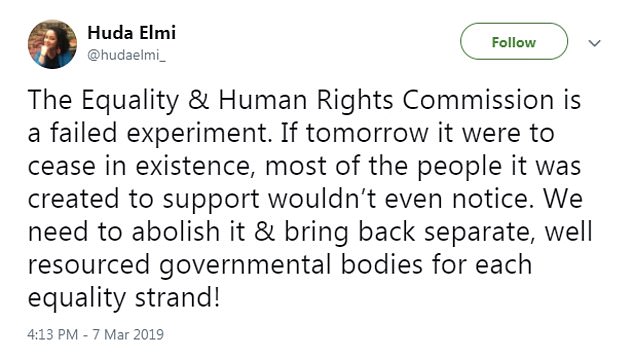 Huda Elmi wrote on Twitter (pictured) that the EHRC should be scrapped. She later clarified that she supported Labour’s co-operation with the equality watchdog 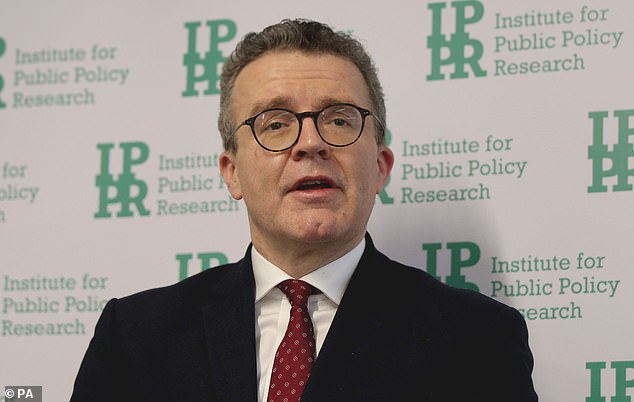 The development comes after a string of complaints of anti-Jewish comments by Labour members.

It also follows the resignation of prominent Jewish MP Luciana Berger from the party, which she said had become ‘institutionally anti-Semitic’.

In a statement, an EHRC spokesman said: ‘Having received a number of complaints regarding anti-Semitism in the Labour Party, we believe Labour may have unlawfully discriminated against people because of their ethnicity and religious beliefs.

‘Our concerns are sufficient for us to consider using our statutory enforcement powers.

‘As set out in our enforcement policy, we are now engaging with the Labour Party to give them an opportunity to respond.’

A Labour spokesman said: ‘We completely reject any suggestion the party has acted unlawfully and will be co-operating fully with the EHRC.

‘Labour is fully committed to the support, defence and celebration of the Jewish community and its organisations.

‘Anti-Semitism complaints received since April 2018 relate to about 0.1% of our membership, but one anti-Semite in our party is one too many. We are determined to tackle anti-Semitism and root it out of our party.’