The Labour leader last night refused six times to say whether he would order special forces to kill a terror chief.

Jeremy Corbyn was asked repeatedly if he would sanction an operation if British intelligence identified the new leader of Islamic State.

He said if it was possible they should be captured, but if not then he would have to ‘take the appropriate decisions at that time’.

Mr Corbyn was then challenged about what he would order British troops to do if the terrorist was wearing a suicide vest – but again could not say that he would sanction lethal force.

Earlier this month he came under fire after he said it would have been the ‘right thing’ to arrest former IS leader Abu Bakr al-Baghdadi.

Baghdadi detonated his suicide vest during a US military operation in Syria last month.

Jeremy Corbyn speaks during a BBC interview with Andrew Neil on Tuesday night. He refused six times to say whether he would order special forces to kill a terror chief

The BBC’s Andrew Neil said: ‘Our intelligence services say that our special forces have located the new leader of ISIS in their sights, we can get them. Do you give the go ahead to take them?’

Mr Corbyn responded: ‘Let’s find out what the situation is at that moment in time and what I’ve said all along is we practice international law.

‘We stand by it and abide by international law and if it is possible, only if it’s possible, then you try to capture that person…’

Mr Neil pushed him: ‘How do you arrest somebody in hostile territory, surrounded by armed killers wearing a suicide vest?’

‘I said if it is possible. But let’s look at it in a serious way also’, he responded.

Asked if it’s not possible would he give the go-ahead to take them out, he said: ‘Can I say I would take the appropriate decisions at that time when I knew the circumstances.’ 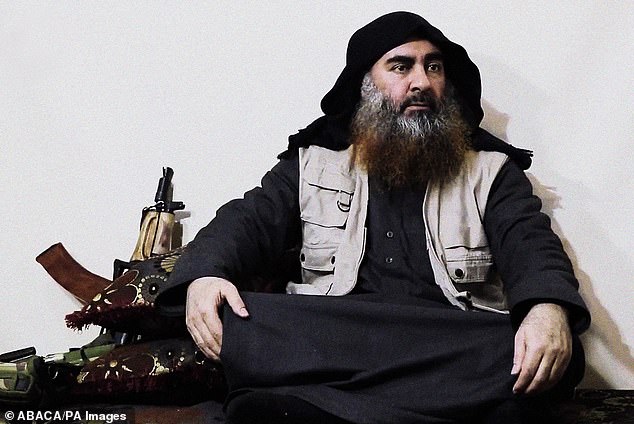 ISIS leader Abu Bakr al-Baghdadi appearing for the first time in five years in April in a propaganda video. He died when US special forces stormed his compound in Syria last month

Put to him that people did not think he would do it, he said that the UK should look at who funded IS.

He said: ‘I mean people look at you and your record and what you’ve stood for and they think, why does he always give Britain’s enemies the benefit of the doubt? Galtieri in the Falklands, to Mr Putin when the Kremlin was trying to kill people in Salisbury.

‘You rarely have a good word to say for our allies. You’ve no time for Nato, the alliance that’s kept us safe. Why would you – why should people trust you to defend our national interest?’