Jeremy Corbyn has said a Brexit delay is now ‘inevitable’ after MPs rejected both Theresa May’s withdrawal agreement and a no-deal exit.

The Labour leader said Article 50 would be extended but said a delay with no clear objective was ‘not a solution’.

Speaking in the Commons he called on Parliament to ‘take control’, saying Labour would take part in cross-party talks to find a ‘compromise solution’ with 16 days to go until Brexit day.

He did not renew his calls for a general election but raised the prospect of a possible second referendum on Brexit.

Jeremy Corbyn, pictured on Wednesday night, has said a Brexit delay is now ‘inevitable’ after MPs rejected both Theresa May’s withdrawal agreement and a no-deal exit

Speaking after Theresa May was defeated again in a vote to rule out no-deal in any circumstances, Mr Corbyn said: ‘Tonight this House has once again definitely ruled out no deal.’

‘While an extension of Article 50 is now inevitable, responsibility for that extension lies solely and squarely at the Prime Minister’s door.’

‘But extending Article 50 without a clear objective is not a solution. Parliament must now take control of the situation.’

Mr Corbyn said he and shadow Brexit secretary Keir Starmer would hold cross-party talks to find a ‘compromise solution that can command support in the House’.

‘This means doing what the Prime Minister failed to do two years ago in searching for a consensus on the way forward,’ he said.

‘Labour has set out a credible alternative plan. Members across this House are coming forward with proposals – whether that’s a permanent customs union, a public vote, Norway plus or other ideas.

‘Let us, as a House of Commons, work now to find a solution to deal with the crisis facing the country and the deep concerns that many people have for their livelihood, for their lives, their future, their jobs, their communities and their factories. 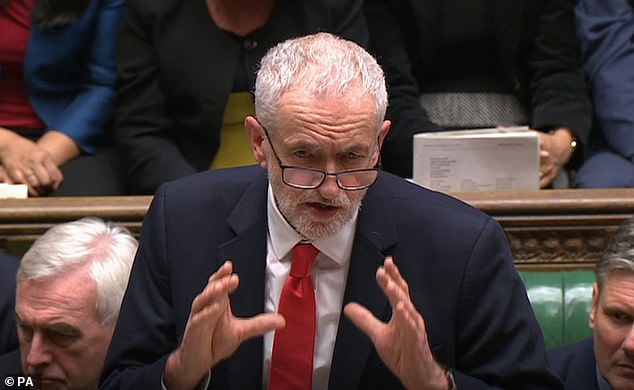 Mr Corbyn spoke in the Commons, pictured, after the Commons votes on Wednesday night to say Labour would hold cross-party talks in a bid to find a ‘compromise solution’ on Brexit

‘It’s up to us as the House of Commons to look for and find a solution to their concerns. That is what we were elected to do.’

Labour MP Jess Phillips said she would support a 21-month extension to the Article 50 withdrawal process.

She said: ‘I would want to see a purposeful, long extension that was for something, not just for more of the same.’

The Commons votes mean that MPs will vote on an extension to Article 50 on Thursday, potentially delaying Brexit until May or later, and leaving the whole process in doubt.

But the votes are not binding and a no-deal Brexit on March 29 remains the default position until an extension is agreed.

EU leaders have warned that Britain will need a ‘credible justification’ to delay its departure from the union.

Mrs May told the Commons that a longer extension would require Britain to vote in European Parliament elections later this year – which she said was ‘not the right outcome’.