The Labour leader said the country needed ‘social priorities’ that placed homeless people above the right for foreign investors to buy and sell property off plan.

Mr Corbyn insisted Labour would intervene on the housing market in a ‘number of ways’ to help social tenants, private renters and first time buyers.

A Labour Party policy note said a Corbyn government would also seek to take over housing association properties when they become vacant and hand them to homeless people instead of making them available again as affordable homes.

The announcement that homeless people would be given newly vacant housing association properties insisted the homes would be replaced in a wider building programme. 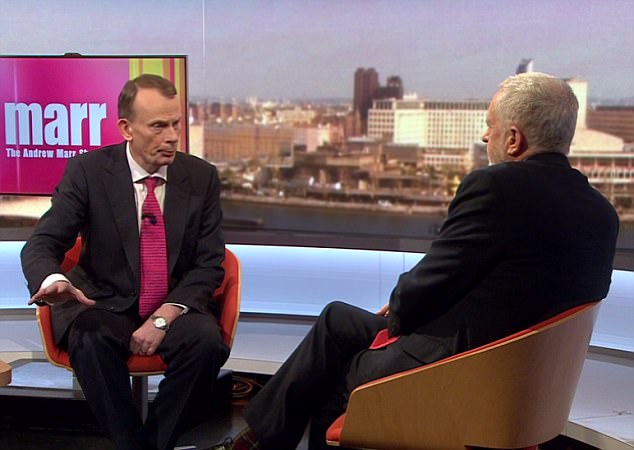 Figures from the Ministry of Housing, Communities and Local Government last week revealed the highest figure in the eight years rough sleeping has been tracked.

It marks another steep rise in the problem in recent years, up 15 per cent from 4,134 in 2016 to the highest point since comparable records began in 2010.

In an interview with the BBC’s Andrew Marr how he would fix rough sleeping, Mr Corbyn said: ‘(We would) immediately purchase 8,000 properties across the country to give immediate housing to those people that are currently homeless.

‘At the same time we would require local authorities to build far more.

‘The problem is homeless people, rough sleepers, beg to get money for a night shelter, stay in the night shelter or a hostel.

Mr Corbyn agreed there was a major problem with new flats being bought and sold off plan before they are left empty.

Asked if homeless people should be handed empty luxury flats, the Labour leader said: ‘We would give local authorities the power to take over deliberately kept vacant properties. 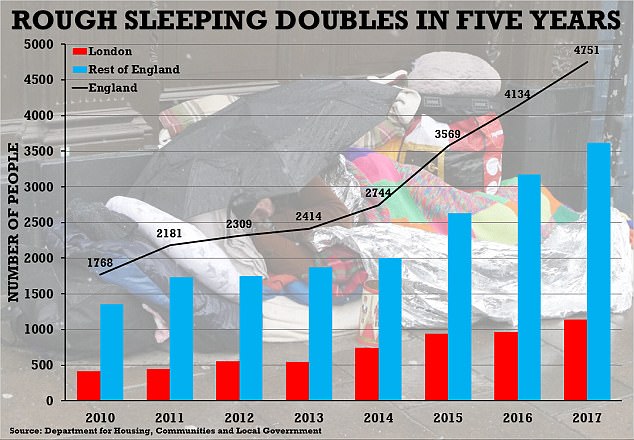 The number of people sleeping rough in England reached a recorded high of 4,751 in the autumn of last year, new data reveals today – with almost a quarter in London alone 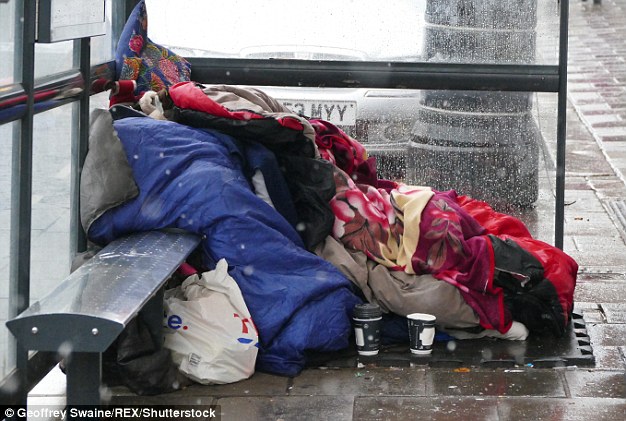 Of the people counted rough sleeping in London there were 1,137. This is an increase of 18 per cent from the 2016 figure of 964. Pictured are rough sleepers in Windsor on Sunday

‘When you have in the middle of an area where there is a lot of housing stress, many people rough sleeping, you luxury, glossy, glistening block sold off plan… who may buy it and sell it before it is even built.

‘Let’s look at social priorities here. Many people are homeless, many people are living in overcrowded accommodation, many in middle class families children cannot leave home because they cannot raise a deposit for a private rented flat, have no chance of buying and no chance of a council flat.’ 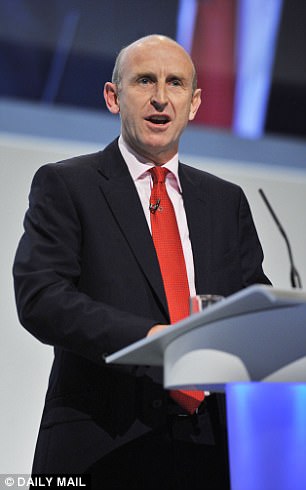 He added: ‘There is something grossly insulting about the idea you would build a luxury block… deliberately keep it empty knowing that with property price inflation the investor is going to make 10 per cent or 12 per cent a year… maybe a bit less but they are going to make a fair amount out of it.

‘Surely we have to have a social objective and a social priority in our society.’

Mr Corbyn said Labour make intervention into the market ‘in a number of ways’.

He said there would be more council houses built, life time tenancies at a secure rent and regulation of the private rented sector.

Shadow housing secretary John Healey added: ‘The rising number of people sleeping on the streets and on park benches shames us all. There can be no excuses – we can end it and we must.

‘Homelessness shames us all but should shame Conservative Ministers most. It is direct consequence of decisions made by the Tories on housing, and on funding for charities and councils.

‘Under the last Labour government, years of sustained action cut rough sleeping by three-quarters, but it has more than doubled since 2010.

‘You can’t help the homeless if you don’t provide the homes. A Labour government would put a stop to this national scandal and provide those who need it most with a place to call home.’