Jeremy Hunt risked a furious backlash today after he suggested he had saved the NHS when he was health secretary as he also ruled out an early general election and attacked Jeremy Corbyn.

Mr Hunt said after a visit to West Cumberland Hospital in Cumbria that he had ‘fought to improve patient safety & deliver the cash boost that will secure our NHS for the future’.

The remarks are likely to provoke outrage among healthcare campaigners and professionals who were heavily critical of Mr Hunt’s approach to the health service in the past.

He made the comments before taking part in the latest Tory leadership hustings event in Carlisle when he vowed not to call an election until Brexit is delivered should he be the next prime minister.

He also criticised Mr Corbyn and described him as the ‘crocodile lurking under the surface of British politics’.

Meanwhile, Boris Johnson, the front runner for the top job, used his appearance in front of Conservative Party members to tell them he was the man to turn around the party’s fortunes.

He said the contest was now entering ‘the final furlong’ and insisted ‘the hour is darkest before dawn’.

Jeremy Hunt, pictured today with LBC presenter Iain Dale at a hustings event in Carlisle, said he would not call an early election until Brexit has been delivered 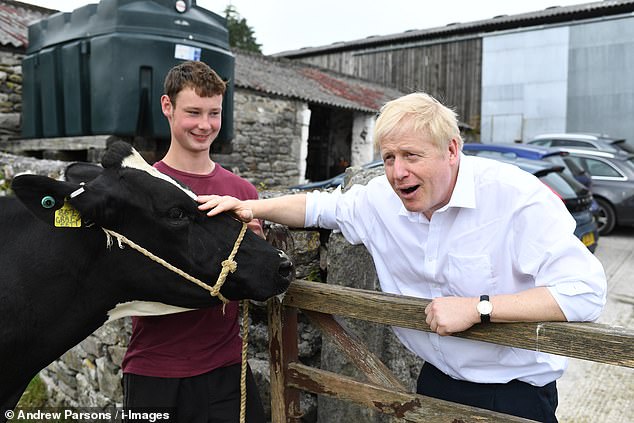 Boris Johnson, pictured in Cumbria today, has stepped up his efforts to be the next PM after his campaign got off to a rocky start 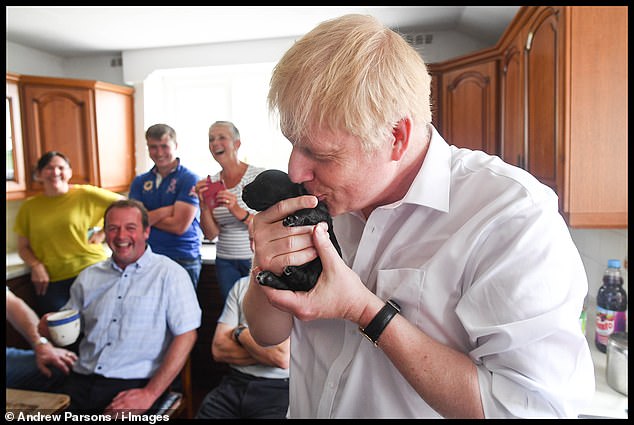 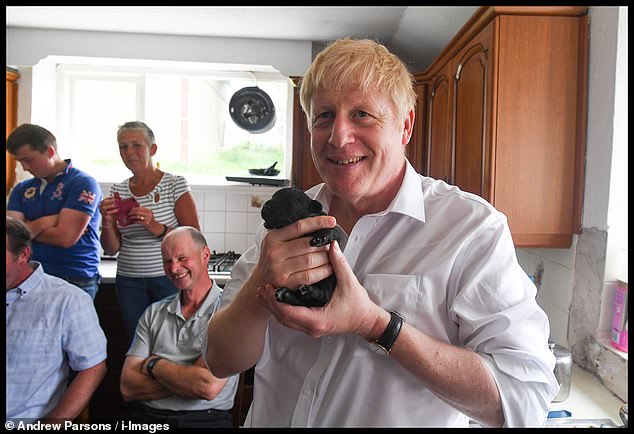 The Tory leadership challenger suggested this afternoon that the Conservatives could not win a general election before the UK has split from Brussels.

He then launched a savage attack on the Labour leader who he described as ‘anti-British’ and ‘ruthless’.

He said: ‘I promise you this as a campaigner, as your prime minister I will not take us into an election until we have done two things.

‘First of all got more young people to vote conservative. We cant be the party of aspiration unless we get the most aspiration people in our country supporting us and that is a big, big change, we need to do that and I have got the policies to make that happen.

‘Secondly, we need to be absolutely clear that we will not provoke a general electuin until we have left the European Union.

‘We cannot go back to the people and ask for another mandate until we have delivered the mandate that they gave us last time.

Mr Hunt also vowed to boost the UK economy to bolster Britain’s hand in trade talks with the EU.

He vowed to ‘land an economic jumbo jet on Europe’s doorstep so that when it comes to those trade talks they need us every bit as much as we need them’.

He then tried to improve his standing with Tory Brexiteers as the Remain-backing minister said he would change his mind if there was a second referendum.

‘I would vote to leave the European Union,’ he said.

Mr Hunt remains the outsider in the race for Number 10 with Boris Johnson now 1/8 with the bookies and Mr Hunt at 5/1, according to the bookmaker Coral.

Coral said the current odds are the ‘shortest price Boris Johnson has ever been in the betting to be prime minister’ and it would be ‘one of the biggest surprises in the history of betting on politics’ if he does not win.

The hustings came as Theresa May urged the Conservative Party to stick to its traditional values as she called on her successor to maintain her approach to ‘cooperation and compromise’ on the world stage.

Speaking at the end of the G20 summit in Osaka, Japan, Mrs May offered her advice on how Mr Johnson or Mr Hunt could combat the existential threat posed to the Tories by The Brexit Party and the resurgent Liberal Democrats.

She said: ‘I think what’s important for the Conservative Party is that we continue as a party and as a Government in delivering on the values that have always underpinned what we as Conservatives believe in. 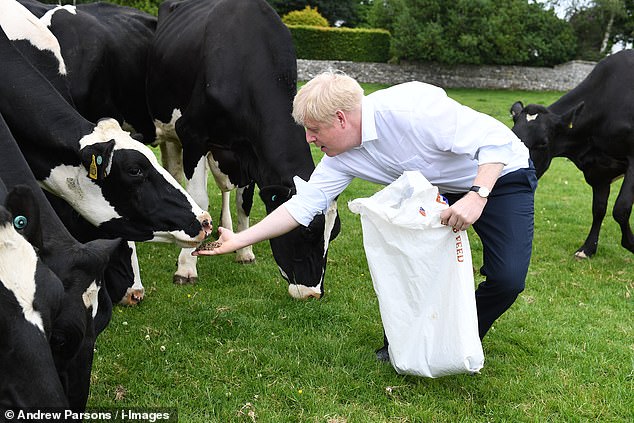 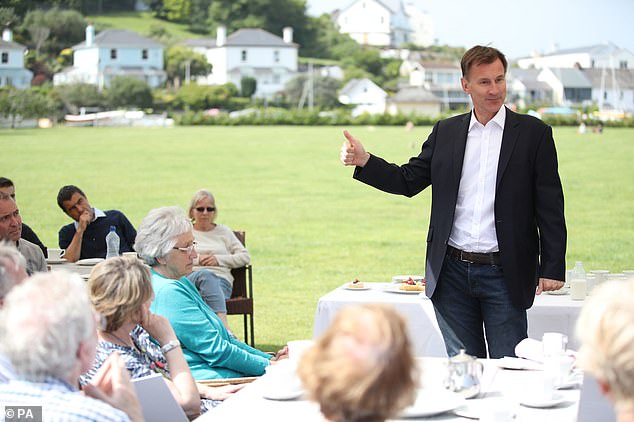 Jeremy Hunt, pictured in Dartmouth yesterday, started the contest as a self-described ‘under-dog’ but he is likely to be happier his opponent with how the campaign has gone so far

‘That’s about security, as much about economic security through a balanced approach to the economy, that’s enabling us to end austerity.’

She also stressed the importance of continued ‘collaboration with other countries’ if the UK is to prosper in the future.

‘We have always understood that our success as a nation is tied to our collaboration with other countries and the relationships we build,’ she said.

Mrs May is due to formally resign and make way for her replacement on July 24.

Meanwhile, Justice Secretary David Gauke warned Mr Johnson against his pledge to deliver Brexit with or without a deal on October 31 because he said it made a No Deal divorce ‘inevitable’.

Speaking after he defeated a vote of no confidence in his South West Hertfordshire constituency, he said: ‘If he is going to maintain a position that leaving on 31st October is sacrosanct then I think the reality is that is leaving with no deal.

‘I think the chances of getting a deal done and the legislation through by 31st October is approximately zero.’

Both Mr Hunt and Mr Johnson are now in full campaign mode with hustings events in front of the Conservative members who will choose between them now happening on an almost daily basis.

Mr Johnson has stepped up his efforts as he looks to cement his position as the prohibitive favourite and yesterday he addressed five Conservative association events across the south west, the Midlands and the Welsh border.

Before the first of today’s hustings events, he visited Shropshire before heading to Wrexham and then onto Cumbria for a rural visit where he was photographed stroking a cow.

The event in Carlisle is the first of two Tory leadership hustings the candidates will face today with one to follow this evening in Manchester. 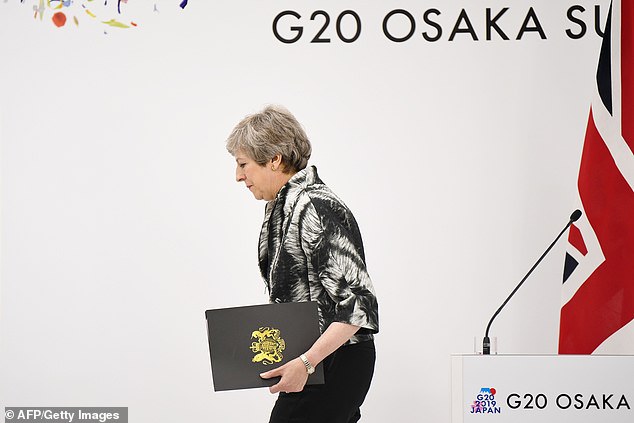 Theresa May, pictured today in Osaka, Japan, used what is expected to be her last appearance on the world stage as PM to urge her potential successors to stick to Conservative values 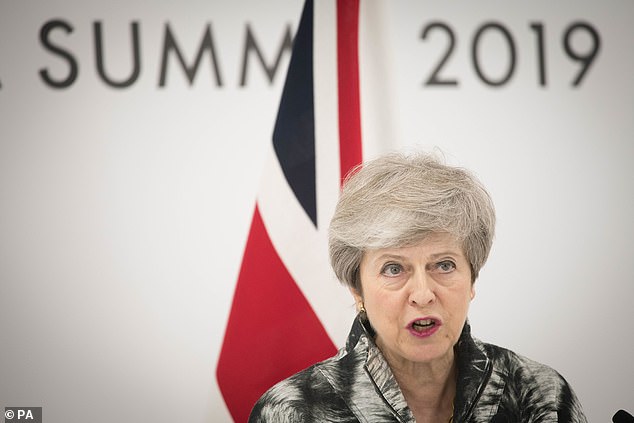 The outgoing prime minister, pictured during a press conference in Osaka today, also urged whoever takes over to stick with her policy of seeking international cooperation

The race for Number 10 is now in full flow with both campaigns having had good days and bad ones.

However, it is Mr Hunt who is likely to be the happier of the two with the way things have gone since they made it onto the final ballot last week.

Mr Johnson’s campaign was rocked early after a row between him and his girlfriend Carrie Symonds prompted neighbours to call the police.

The former foreign secretary then repeatedly refused to talk about the matter as he was grilled at hustings events and in media interviews.

His campaign got back on track after Iain Duncan Smith, the veteran Brexiteer and Tory former leader, was put in charge and unleashed Mr Johnson on the campaign trail.

But his momentum was dashed yesterday after it emerged he had called the French ‘turds’ over Brexit when he was still a member of Theresa May’s government last year.

The comment was removed from a BBC documentary broadcast last November after pressure from the Foreign Office amid fears the remark would harm diplomatic relations with Paris and scupper the chances of a good Brexit deal.