Great Britain should not become Little England, Jeremy Hunt said yesterday as he pledged to abandon the tens of thousands target for immigration.

The Tory leadership hopeful told the Daily Mail that he would abandon Theresa May’s flagship pledge to limit the numbers moving to the UK.

Calling for flexibility, the Foreign Secretary said Britain could not ‘pull down the shutters’ after leaving the EU and said skilled workers should be prioritised.

The Tory leadership hopeful (pictured yesterday in Peterhead, Aberdeenshire) told the Daily Mail that he would abandon Theresa May’s flagship pledge to limit the numbers moving to the UK

He also vowed to end the plan to stop those earning less than £30,000 migrating to the UK for jobs.

In an interview with the Mail, Mr Hunt said: ‘I think there needs to be flexibility for the whole of the UK, because at the point of Brexit we need to show the world that we’re not going to change our fundamental national character, we’re not going to be a country that changes from Great Britain into Little England and pulls down the shutters and says, foreigners not welcome.

‘We must bring down immigration rates but the way to do that in the long run is to increase the skills levels of our own people so that we train more doctors, more nurses, and then we have less need to bring people in from overseas. 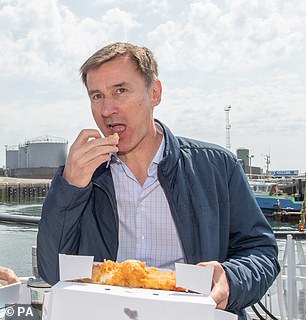 Calling for flexibility, the Foreign Secretary said Britain could not ‘pull down the shutters’ after leaving the EU and said skilled workers should be prioritised

‘But I think we do need to review the £30,000 salary level and I am not a supporter of the ‘tens of thousands’ target.’

He added: ‘I think we just need to look at the whole thing carefully and recognise that the biggest priority the moment we leave the European Union is to protect the economy and really fire it up so the rest of the world sees that at the point of Brexit, far from contracting, Britain started motoring.’

Former home secretary Mrs May put her pledge to reduce immigration to the ‘tens of thousands’ at the centre of her premiership.

But many of her colleagues have objected to the controversial figure, including former leadership hopeful Sajid Javid, the current Home Secretary.

The Conservatives’ 2017 election manifesto said: ‘It is our objective to reduce immigration to sustainable levels, by which we mean annual net migration in the tens of thousands.’

The goal of cutting net migration – the difference between the number of people arriving in the UK versus the number leaving, over a year – was first set by David Cameron’s coalition government in 2010.

The target has never been met, with annual net migration standing at about 244,000 at present.

Mrs May had also planned to prevent EU citizens earning under £30,000 migrating to the UK after Brexit.

Under that system, skilled migrants would have to earn at least £30,000 annually before being allowed into the UK on five-year visas.

But Mr Hunt dismissed the pledge yesterday, after it raised fears that farming and fish industries could suffer shortages of workers. 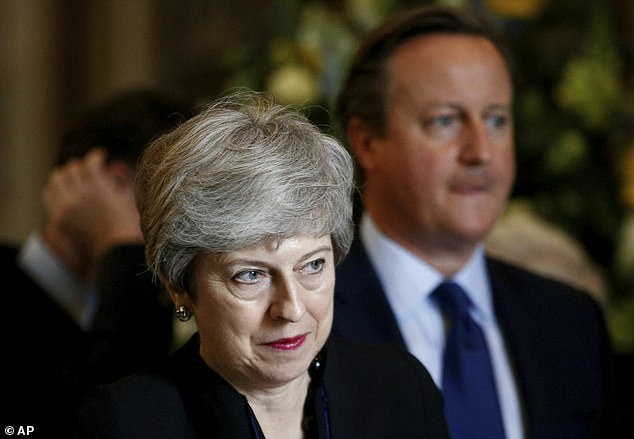 Mrs May (pictured in Westminster Abbey next to David Cameron on June 20) had planned to prevent EU citizens earning under £30,000 migrating to the UK after Brexit. But Mr Hunt also plan to stop the target

During a visit to Scotland, the Foreign Secretary instead called for ‘flexibility’ on immigration for the whole of the UK.

Mr Hunt also welcomed polls by the Mail on Sunday showing that he had pushed ahead of his rival Boris Johnson after Mr Johnson’s bust-up with girlfriend Carrie Symonds.

‘The feedback that I’m getting from party members, who I’m meeting lots of here in Scotland, is this contest is wide open,’ he said.

‘They knew Boris better than any of the other candidates so perhaps that inclined them to say they supported him, but I’ve had fantastic feedback from the hustings yesterday in Birmingham and I think this is a contest that is totally up for grabs.’

Mr Hunt also condemned Mr Johnson’s plan to raise the 40 per cent threshold for income tax to £80,000 in the rest of the UK, which would not benefit Scots because income tax is devolved to the Scottish parliament.

However, Scots pay the same National Insurance rates as the rest of the UK so would be hit by Mr Johnson’s proposal that the threshold for paying the lower 2 per cent rate of National Insurance should rise from £50,000 to £80,000.

Mr Hunt said: ‘The Conservative Party has to speak for the whole of the United Kingdom, and that’s why my first priority as prime minister would not be tax cuts for the wealthiest in society.’