‘Stop talking for a second!’: Jeremy Vine threatens to put a piece of paper in Terry Christian’s mouth after he continues to interrupt panel live on air

An infuriated Jeremy Vine was left telling guest panellist Terry Christian to ‘stop talking for a second’ as a TV debate became heated on air.

During a segment of Vine’s daytime talk show on Channel 5, a debate on the logistics of Brexit took an unexpected turn when the panel, which comprised of businessman John Caudwell and journalist Carole Malone, were left unable to speak.

The segment eventually saw an exaspertated Vine, 54, shout over Christian’s repeated attempts to speak over his fellow guests and threaten to put a piece of paper in his mouth. 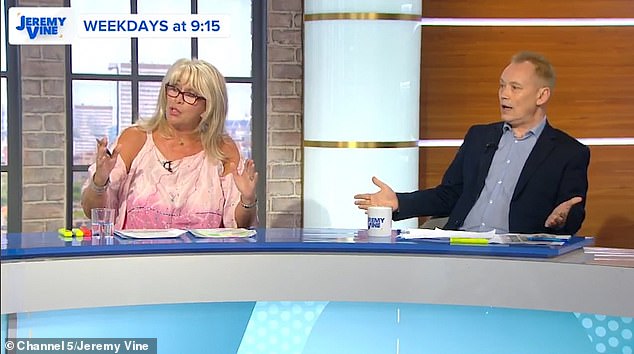 During a clip of the segment, which has since gone viral, Christian, an award-winning journalist, told the panel he would not mind a no deal Brexit if it was worth 1.5 billion.

He went on to say the real question the nation had to answer was if Boris Johnson could be trusted, before adding Brexit was simply ‘undeliverbale’.

Intent on making his point, Christian went on to say: ‘We haven’t done any preparation.’

The broadcaster then went on to fire a series of questions to the panel but left very little time for the guests to respond.

He asked: ‘How do you prosper by leaving? What tangible benefits are there with leaving the EU?’ 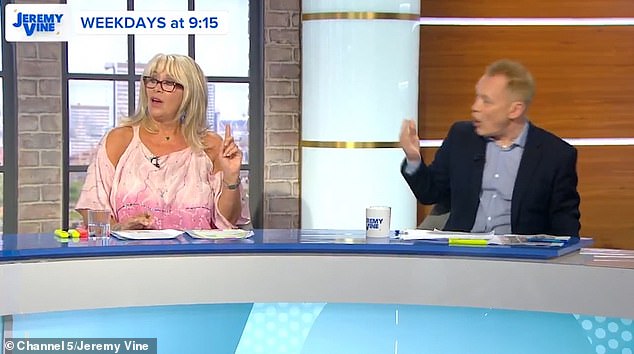 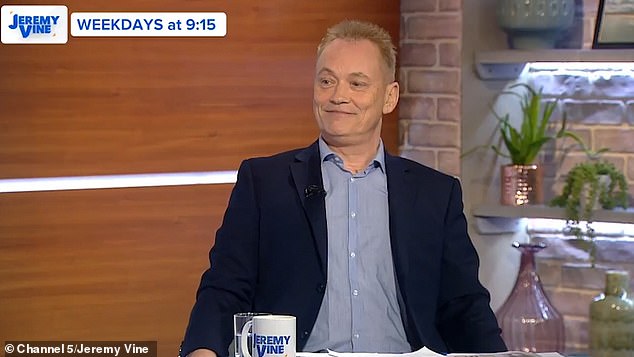 As chaos ensued Vine stopped Christian and said: ‘Terry, Terry, can I just say something. You need to, Terry…

‘Stop talking for a second, I’m going to get to the end of a sentence. Don’t say anythinig for ten seconds.’

He continued: ‘When you ask a question you listen and you don’t say anything.’

However Vine immediately hit back by shouting: ‘If you say anything more. Don’t say exactly.’

He continued: ‘If you speak again I’m going to take the piece of paper and out it in your mouth.’ 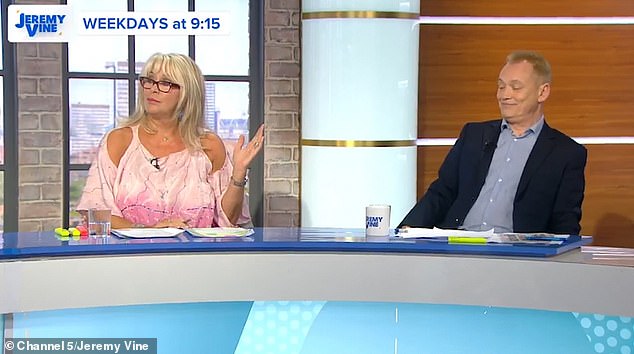 Vine tells Christian: ‘Stop talking for a second, I’m going to get to the end of a sentence. Don’t say anythinig for ten seconds’

Following the heated discussion, fans of the show immediately took to Twitter to share their thoughts on the live air debate.

One user wrote: ‘Please stop inviting Terry Christian on the panel he has no ideao how to have a conversation so annoying abd rude for the first time ever I want to switch the show off!’

While another user wrote: ‘Jeremy Vine why book Terry Christian if you won’t let him talk? He isn’t known for being shy and retiring! I’m not a flag waving fan, but I’m finding myself feeling a bit sorry for him constantly being shouted down!’