Former England striker Jermain Defoe has found comfort with a stunning Instagram model just weeks after the collapse of his marriage, MailOnline can reveal.

The ex-Tottenham Hotspur and West Ham star has been secretly seeing blonde influencer Alisha LeMay, who was once tipped to star on Love Island, for several weeks, say sources close to the pair. 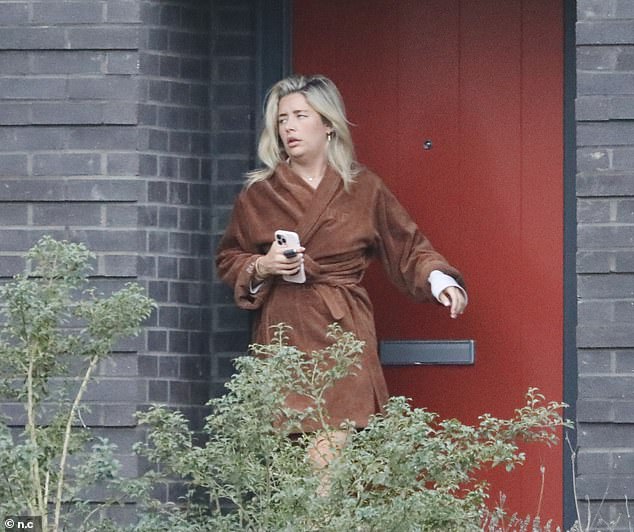 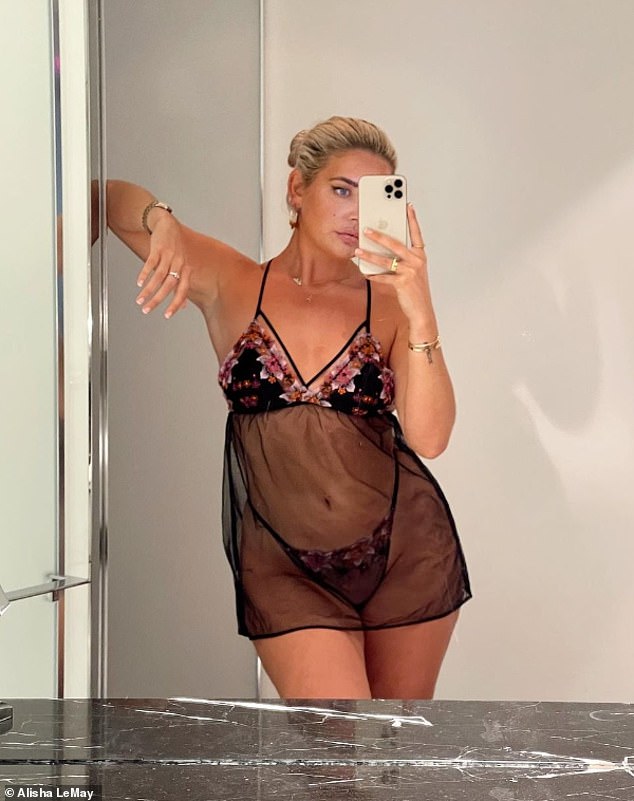 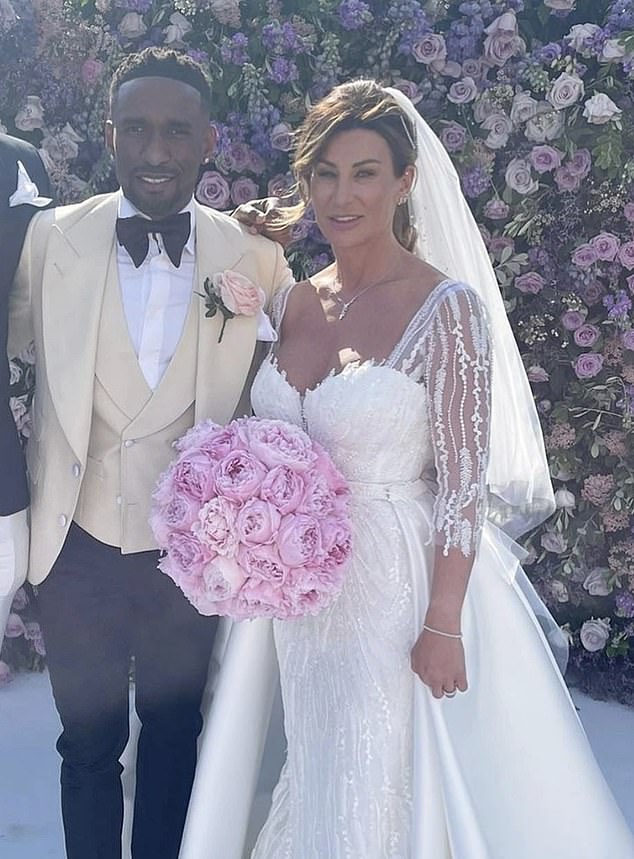 Alisha, 31, came to the door wearing a brown dressing gown and clutching a mobile phone before stepping outside to see him off.

Defoe, 40, was dressed in a blue puffer jacket over a hooded top featuring a cowboy with a stetson hat and moustache, designer ripped jeans and black trainers.

The TV football pundit, who was holding a bottle of water, a smart phone and a bag of snacks, pulled on a black beanie hat over his sparkling earrings and climbed into his Range Rover before driving away – with Alisha smiling as she waved him off.

He headed to a BBC studio where, dressed in the same outfit, he posted a short video of himself on Instagram before recording a new football podcast.

After he left Alisha walked to her Land Rover Defender car and collected a yellow plastic bag from Selfridges – the posh store where she used to work as a personal shopper. 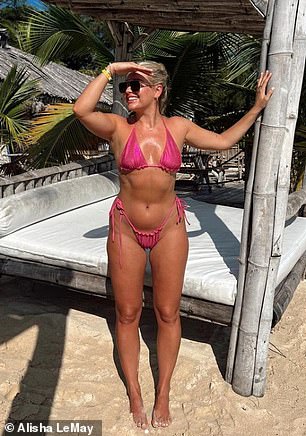 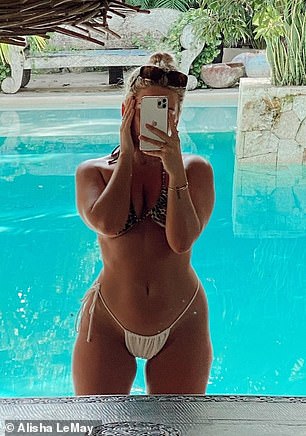 Alisha (pictured), who describes herself as a digital creator, influencer and stylist, has an impressive 172,000 followers on Instagram including Anouska Santos, the long-term partner of Manchester United and England star Luke Shaw 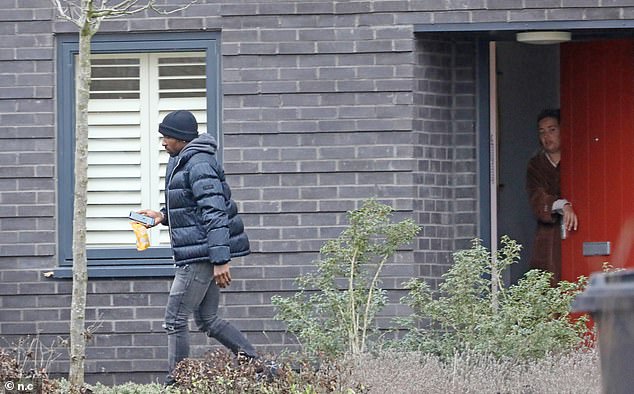 Defoe (left), 40, was dressed in a blue puffer jacket over a hooded top featuring a cowboy with a stetson hat and moustache, designer ripped jeans and black trainers 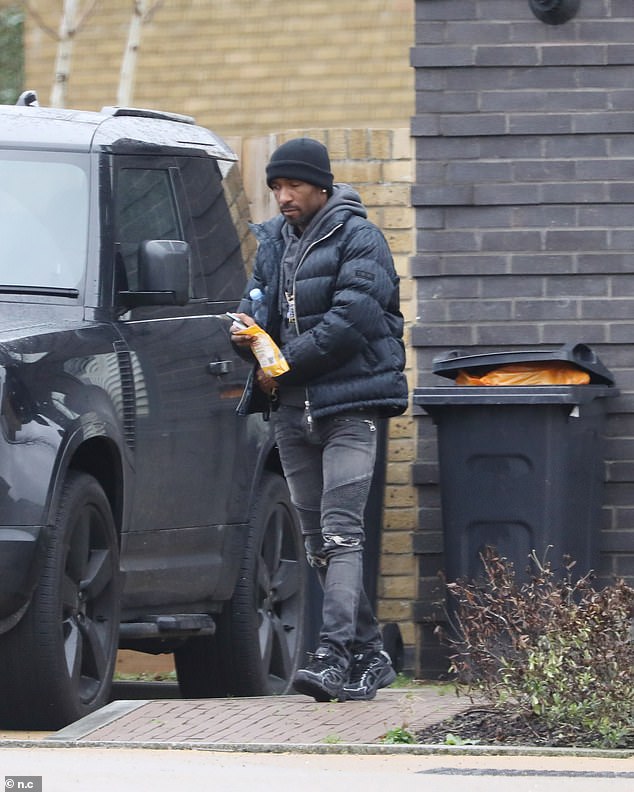 TV football pundit Defoe (pictured), who was holding a bottle of water, a smart phone and a bag of snacks, pulled on a black beanie hat over his sparkling earrings and climbed into his Range Rover before driving away 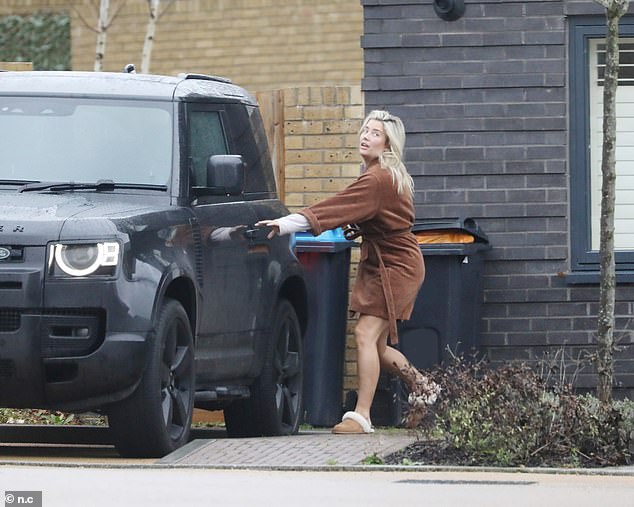 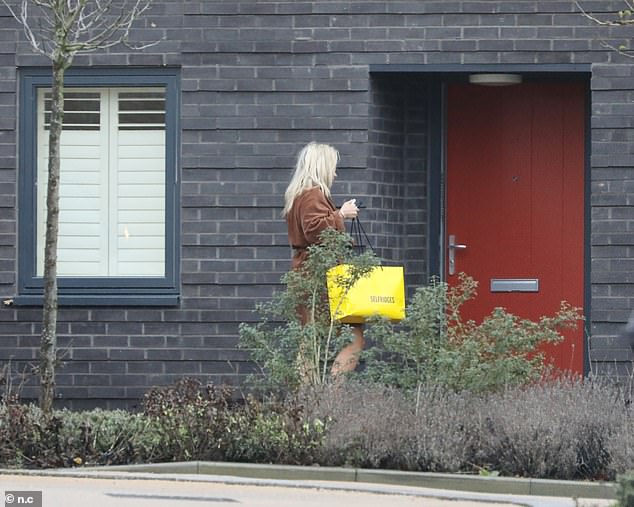 The footballer was back again at her address on Thursday evening, parked on a space allocated to her and emerged from inside her front door on Friday morning before driving off again.

Sources said Defoe has been a ‘regular visitor’ at the property in recent weeks.

He has also been seen with her inside the New Ground Cafe in Newhall, which is about a 10 minute walk from her house.

While the couple have not made their alleged relationship public, they have been spotted in local coffee shops and venturing out in his 4×4.

The star was seen parking the silver Range Rover outside Alisha’s home on Wednesday before going inside – where he stayed until this morning.

Jermaine stayed at her home on at least three nights this week, Wednesday Thursday and Friday evenings.

But he emerged this morning to deny that he was in a relationship with her.

Speaking to MailOnline on Saturday outside Alisha’s home Jermain, wearing a jacket with the Tottenham cockerel motif, said he was surprised that news of him staying there was known.

‘How is that possible? If Jay Z was in Chigwell…how would you know?

Pointing down the street, he added: ‘Alisha’s brother lives there and her dad lives there. I have known the family since my first time at Tottenham.

Told that there had been internet postings about him and Alisha, he said: ‘I have had girls making stuff up for years.’

He admitted he had visited the New Ground cafe nearby with Alisha and added: ‘But how come no-one took pictures then?’ 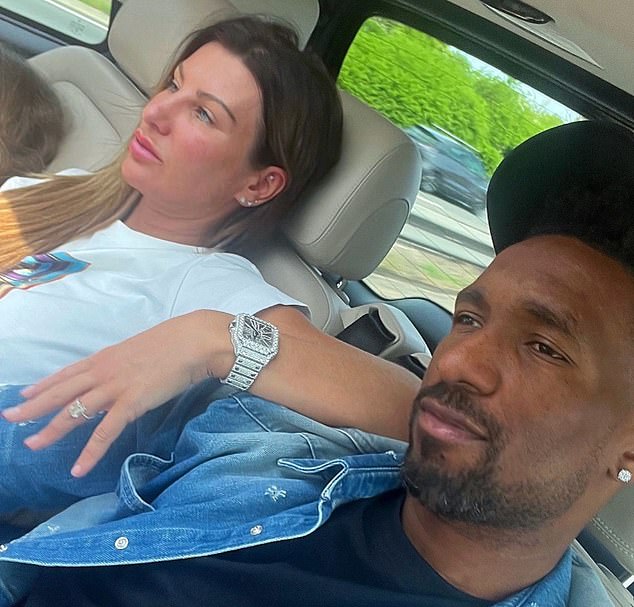 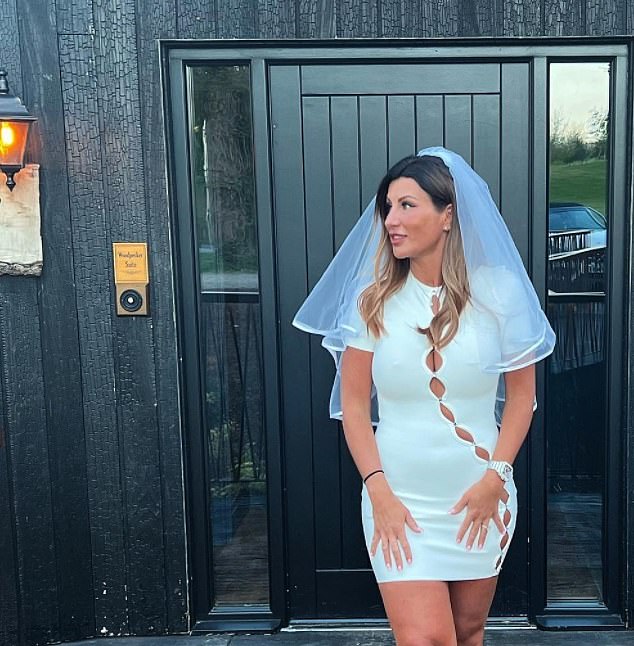 He added: ‘At the end of the day when people get married or in a relationship and things happen, I don’t understand why they can’t just leave people alone.

‘Why do they have to find out what’s going on and why you are not together?

‘At the end of the day, I have been with Donna for some time and stuff has happened.

‘I speak to Donna every single day. And all of a sudden people who have been my friends for years say ‘oh, he’s in a relationship with someone just because I went for a coffee with someone’.

‘I have been in a relationship with girls before who have got guy friends. How do they know that Alisha and Donna are not friends?’

Asked if they were, indeed, friends, he said: ‘I have got nothing to say. ‘

Asked about reports that he and Donna were not legally married, he said: ‘They need to be careful with that one.’

Asked twice more about whether he and Donna had a marriage licence, he repeated: ‘They need to be careful with that one.

‘I know you’re doing your and job and that, but I’ve got nothing to say. Alisha is not in the house.’

But she emerged minutes later from inside the house and sped off in her black Land Rover Defender which has 2022 number plates. 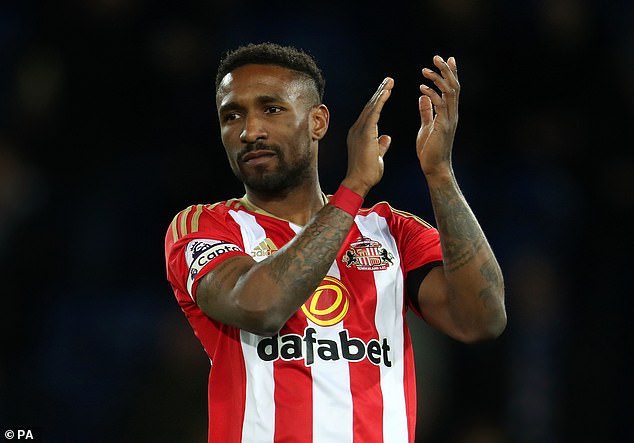 Defoe (pictured playing for Sunderland in 2017), who has been dogged by cheating rumours in the past, was quickly back in action on the dating front just days after it was reported his marriage had hit the rocks 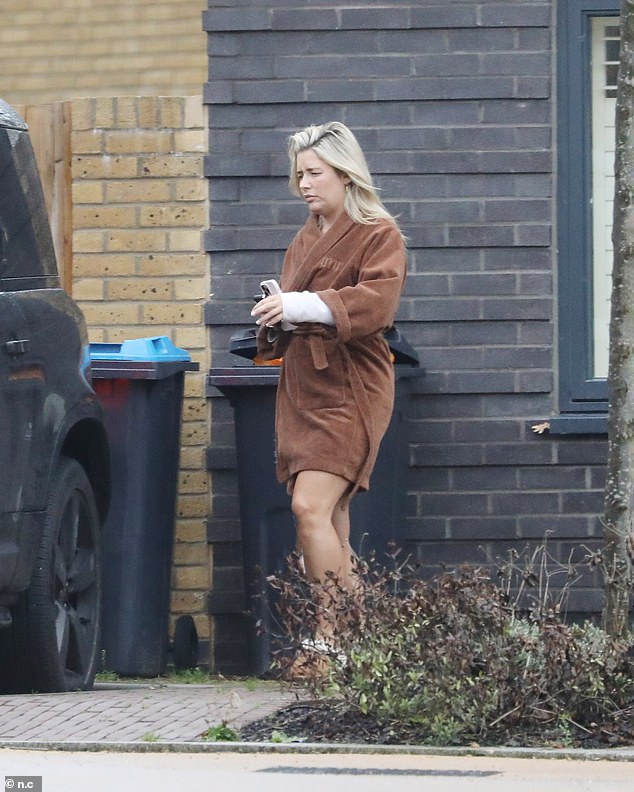 The influencer regularly posts pictures of her life, including of exotic holidays

Defoe has a home which he used to share with Donna 13 miles away in Chigwell.

The centre forward, who has been dogged by cheating rumours in the past, was quickly back in action on the dating front just days after it was reported his marriage had hit the rocks.

Alisha, who describes herself as a digital creator, influencer and stylist, has an impressive 172,000 followers on Instagram including Anouska Santos, the long-term partner of Manchester United and England star Luke Shaw.

She follows just 957 people, including Defoe.

The jet-setter has posted a string of glamorous photographs on her account from exotic holiday destinations around the world including Jamaica, Ibiza, Paris and the Italian island of Capri.

Just days ago she posted photos of herself swimming among ferocious-looking sharks while free diving off a sun-kissed beach on a paradise island in the Maldives.

She admitted being out of her ‘comfort zone’ but described it as ‘an experience of a lifetime adding: ‘Started 2023 in a whole new world’.

Alisha travelled to the islands over Christmas with her close friend Mica, a make-up artist and personal shopper.

Alisha is friends with Towie stars including Pete Wicks.

When she was rumoured to have been lined up to appear on ITV’s Love Island two years ago a source said: ‘Alisha is exactly the type of contestant ITV2 is looking for – she’s gorgeous, body confident and isn’t afraid to be herself.

‘She already works as an influencer and has collaborated with brands like PrettyLittleThing, Missguided and ASOS.

‘She’s an advocate of body positivity and often admits on her Instagram to never wanting to be perfect, which is an important message to young viewers of the show.’

Defoe, who wed Donna last summer, spent Christmas on the Caribbean island of St Lucia while Donna was back in freezing Glasgow.

Defoe – who played for a string of clubs during a 22-year career including Bournemouth, Portsmouth, Sunderland and Rangers – was pictured on holiday without his wedding ring while Donna had gone back to using her maiden name.

The last photograph she posted with Defoe on social media was when the pair dressed up for a night out with friends October 30.

She went on to unfollow her husband on social media and both of them removed images of the OK! Magazine cover that featured their £200,000 wedding last June.

The couple tied the knot in a lavish ceremony at stately home Cliveden House in Berkshire. 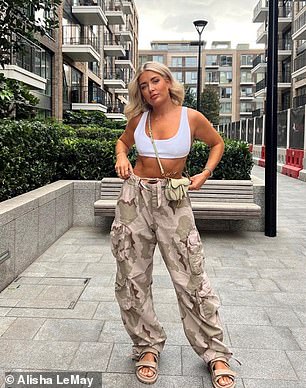 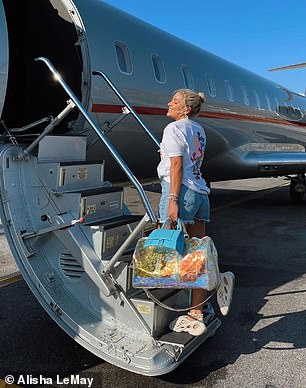 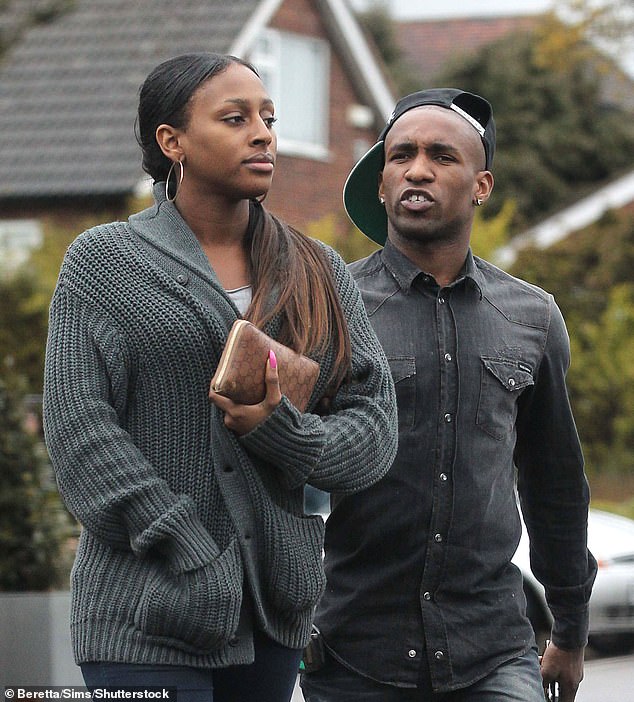 Defoe’s (right) relationship with X-Factor winner Alexandra Burke (left) ended in May 2012 after he was caught cheating with model, Laura Brown

It was reported in October that Defoe – who scored 20 goals in 57 games for England – landed himself in hot water after he allegedly tried to lure a mum for a romp in the back of his Range Rover just weeks after the wedding.

Beautician and botanist Donna, who has a 12-year-old daughter from a previous relationship, reportedly quit the couple’s £300,000 in Glasgow and she was thought to have been staying with her parents.

Just months earlier the pair appeared to be madly in love.

They met in person in January 2021 at a charity event when Defoe was playing for Rangers and Donna asked him for a signed football shirt for a charity event.

Romance blossomed and he proposed at a Glasgow hotel seven months later spelling out ‘Marry me’ with lights in their penthouse suite, which he decorated with heart-shaped balloons and rose petals, and got down on one knee to pop the question.

Defoe said at the time: ‘This is my future, this is forever, this is the person I want to spend the rest of my life with.’

Their first dance was to Luther Vandross’s Always and Forever.

The celebrations lasted until 7am and included fire-eaters, flamethrowers, a Caribbean buffet and a makeshift nightclub.

On June 21, Defoe cheerfully declared on Instagram how ­’dedicating my whole life’ to his new wife was ‘one of the easiest things I’ve ever done’. 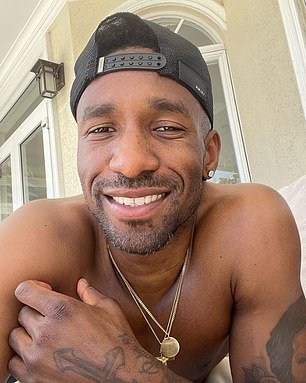 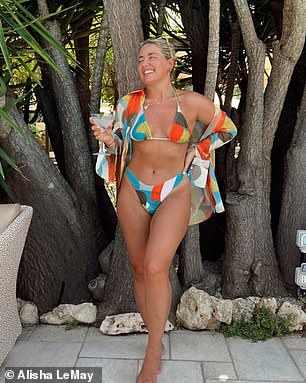 The couple would regularly gush about each other on their Instagram pages, with holiday photos and loving posts about ‘Mr and Mrs Defoe’.

Despite the lavish wedding ceremony it was reported this week that the local register office has no record of the couple legally getting married at the country house venue, which it normally would do.

Defoe has been linked to a string of women over the years, including models Imogen Thomas and Chantelle Houghton as well as former Miss Great Britain Danielle Lloyd.

His relationship with X-Factor winner Alexandra Burke ended in May 2012 after he was caught cheating with yet another model, Laura Brown.

The singer ended up writing album tracks about the heartbreak she suffered as a result of his infidelity, with the lyrics to Day Dreams saying: ‘What were you thinking at the time when you decided to sleep with her?’

Defoe also had a brief relationship with Anne-Marie Moore in February 2013. She gave birth to a son but a DNA test proved the baby wasn’t his.

In 2016 lap dancer Rachel Calvert reportedly dumped her Newcastle United supporting husband Tony on Valentine’s Day after moving in with the striker while he was playing for arch-rivals Sunderland.

In 2017 he was accused of causing the break-up of radio presenter Ben Weston’s marriage, months after he bought a hot tub from his saleswoman wife Sally.

Just weeks after his marriage Defoe was said to have contacted the nurse, a 40-year-old mother, via Instagram and invited her to join him in his Range Rover.

He denied wrongdoing at the time.

As well as his broadcasting work Defoe, who retired in March 2021 is now a youth academy coach and ambassador for Spurs.

The footballer was awarded an OBE in 2018 for his charitable work with the Jermain Defoe Foundation.

While playing for Sunderland in 2016, he struck up a close friendship with six-year-old Bradley Lowery who had a debilitating form of cancer. Tragically, the youngster died the following year.

Defoe was back by her side again on Friday night and was at Alisha’s home at breakfast time today.