Jerome Boateng’s participation at the 2018 World Cup with Germany is in doubt after the defender suffered a thigh injury on Wednesday evening.

Boateng was forced off after picking up the injury in the 34th minute of Bayern Munich’s 2-1 Champions League semi-final first-leg loss to Real Madrid.

And reports in Germany indicate that the injury will keep Boateng out for between four and six weeks, ruling him out for the rest of the club campaign and potentially the World Cup in Russia.

Bild report that Bayern carried out an examination on Boateng after the match and concluded that the 29-year-old had sustained a serious thigh injury.

The centre back sustained the injury while attempting a sprint and has a history of thigh muscle issues, having missed a portion of last season with a similar problem.

Boateng was set to play a key role for Joachim Low’s defending world champions alongside his club team-mate Mats Hummels in central defence.

His spot in Germany’s XI could be now taken by another of his club-mates, Niklas Sule, who replaced Boateng at the Allianz Arena on Wednesday. 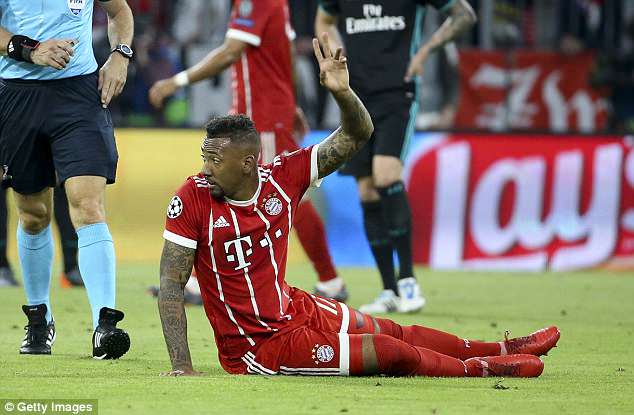 Boateng, who is contracted until 2021, admitted recently that he was considering a move away from Munich having won all there is to win at the Bavarians.

‘I experienced everything at FC Bayern,’ Boateng told Socrates magazine via FourFourTwo. ‘So now I certainly reach a point, where I have to answer certain questions to myself: “What goals do I have that I did not reach yet? Do I want to prove myself always at the same club and always under the same circumstances?”

He added: ‘This is a question of personal challenges. It is not about classical career questions, but about questions for your life. Those are the questions that drive you on as a human being.’