The parents of embattled TV presenter Jessica Mulroney were seen taking her kids out for a walk while she attempts to rebuild herself after her career was tarnished following ‘threatening’ messages she sent to a black social media influencer after a white privilege row.

Mulroney, 40, has reportedly hunkered down inside her Toronto home since she was fired from ABC’s Good Morning America and had her reality TV show, I Do, Redo, canceled earlier this week.

Dailymail.com also exclusively revealed how Mulroney’s best friend, Meghan Markle, was said to have been left so ‘mortified’ by the mother-of-three’s actions that she feels she can ‘no longer be associated with her’.

While Mulroney waits for the smoke to settle, her shoe mogul father Stephen Brownstein, and her mother, Veronica, appear to have joined her in Toronto to provide her with some much-needed support.

The pair were seen out walking with Mulroney’s daughter Isabel and one of her identical twin sons in the sunshine on Sunday morning, while Mulroney herself was nowhere to be seen.

Mulroney’s shoe mogul father Stephen Brownstein (dressed in blue), and her mother, Veronica (seen right), appeared to have joined her in Toronto from Montreal to provide her with some much-needed support 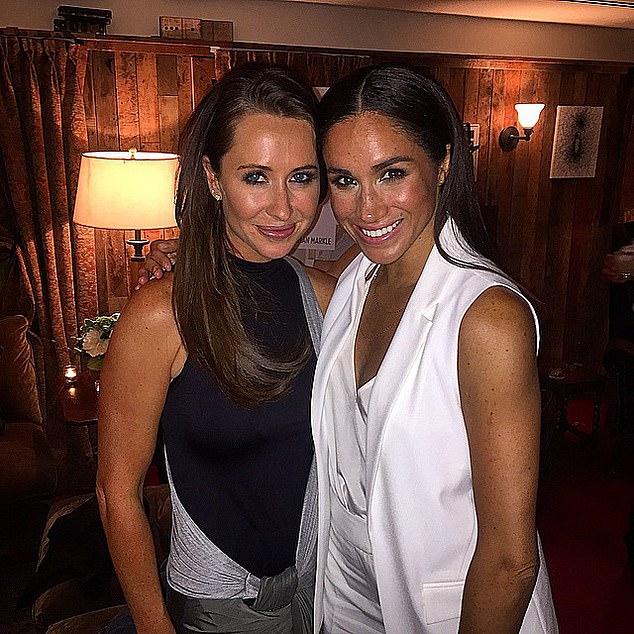 Jessica Mulroney (left), 40, has reportedly holed herself up inside her Toronto home since she was fired from ABC’s Good Morning America and had her reality TV show, I Do, Redo, canceled earlier this week. 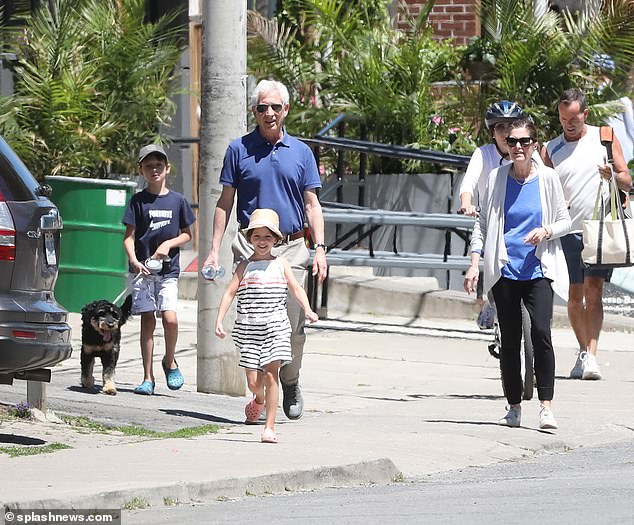 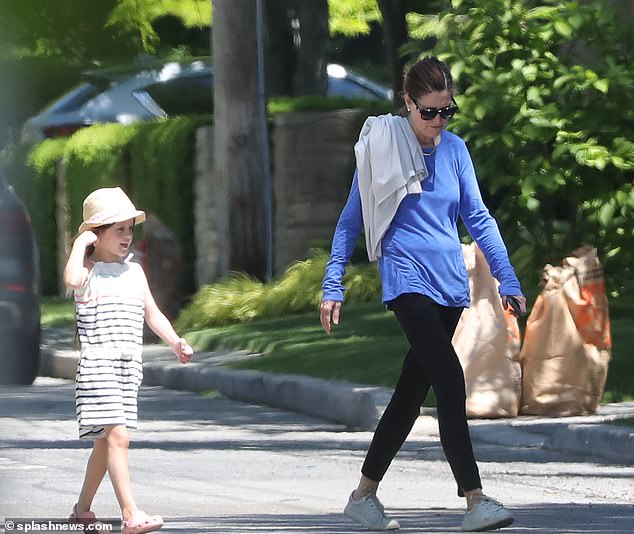 Veronica and her grandaughter Isabel stroll in the Toronto sunshine on Sunday, while Mulroney was nowhere to be seen 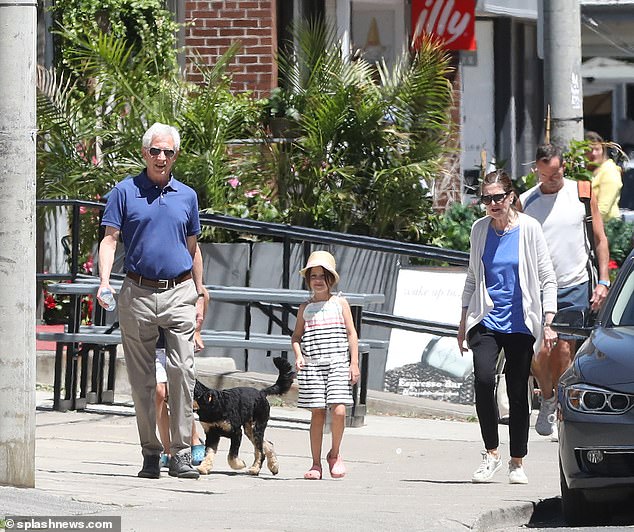 Though it may be a testing time for their mother, the children appeared care-free and were all smiles during the jaunt with their grandparents, and their new family dog, Miss Bruce Wayne

Though it may be a testing time for their mother, the children appeared care-free and were all smiles during the jaunt with their grandparents, and their new family dog, Miss Bruce Wayne.

Mulroney has yet to appear publicly since her clash with lifestyle blogger Sasha Exeter was made public earlier this week.

The turmoil began on Wednesday when Exeter revealed that weeks ago, Mulroney ‘took offense’ to a ‘generic call to action’ she made asking white influencers to use their platforms to address racial inequality.

The influencer claims the exchange resulted in Mulroney saying: ‘I have also spoken to companies and people about the way you have treated me unfairly.

Exeter claimed that Mulroney then threatened her with a lawsuit after she publicly revealed that they’d been embroiled in a private war of words over racism.

When Exeter went public, Mulroney posted a comment on her Instagram page for others to see in which she apologized.

In a comment posted on the video clip, Mulroney said she was ‘unequivocally sorry’, adding that being Meghan’s ‘closest friend’ has ‘deeply educated’ her about race.

‘As I told you privately, I have lived a very public and personal experience with my closest friend where race was front and centre. It was deeply educational,’ Mulroney responded.

Exeter claims she however then sent her a private message soon after, threatening to sue her for libel. 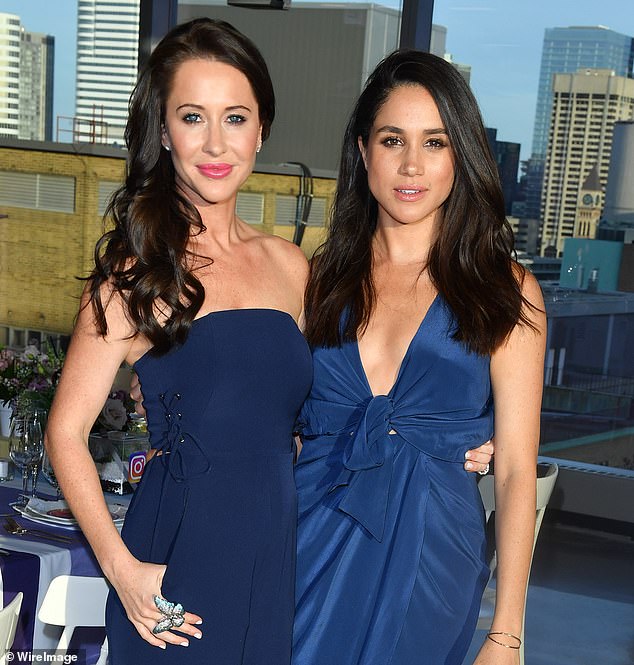 Meghan Markle is ‘absolutely mortified’ with best friends Jessica Mulroney’s ‘tone-deaf’ threats to sue a black influencer and can ‘no longer be associated with her’, close friends of the Duchess of Sussex tell DailyMail.com exclusively 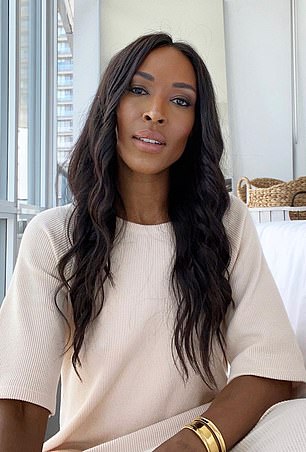 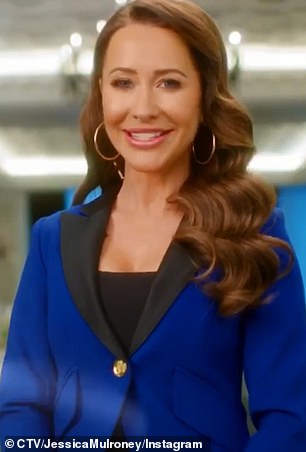 Toronto-based Influencer Sasha Exeter said she was left ‘paralysed with fear’ and ‘stayed up days and nights’ worrying about what Jessica (right) ‘could be saying to my existing brand partners, potential work, potential livelihood’ 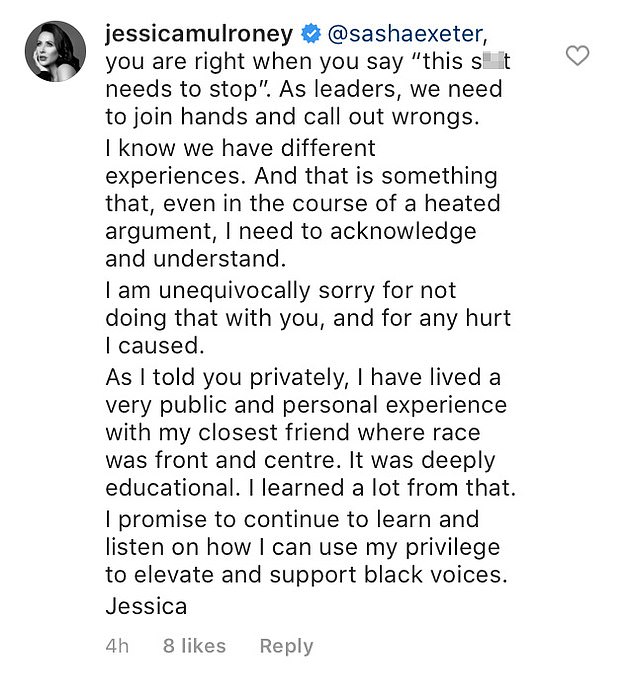 After Exeter shared details of their feud, Mulroney posted this public comment saying she’d been wrong but that she had ‘personal experience with’ her ‘closest friend where race was front and centre’

In the hours that followed, Mulroney – who grew up in a wealthy Jewish family in Canada – was fired from CTV, which aired the wedding show I Do, Red.

‘Recent conduct by one of our shows’ hosts, Jessica Mulroney, conflicts with our commitment to diversity and equality,’ the network said in a statement said.

Hours later, Canadian department store Hudson’s Bay announced on Instagram that ‘in light of recent events’ they too would be distancing themselves from Mulroney, firing her as their fashion and bridal specialist.

‘Over the past week Hudson’s Bay has committed to doing better,’ the statement read. ‘As we move forward, our leadership associates and ambassadors must reflect our brand inclusivity, equality and respect for all. We will not tolerate anything less.’ 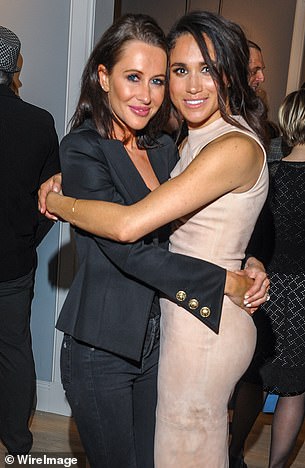 Mulroney returned to Instagram once again on Thursday night to publicly apologize to Exeter for a second time, in which she said that she took ‘personally’ something she shouldn’t have.

‘I did not intend in any way to jeopardize her livelihood. We had a disagreement and it got out of hand. For that I am sorry,’ she said.

‘The events that have transpired over the last few days have made it clear that I have work to do.

‘I realize more than ever how being a white, privileged woman has put me far ahead of so many, and in particular those in the Black community. And while I can’t change the past, I can do my part to do better in the future.

‘I respect the decision of CTV and have decided to step away from my professional engagements at this time. I’m going to take this time to reflect, learn and focus on my family.

‘I also want to take a moment to clarify that I have no intention of pursuing any legal action. I was wrong, and for that I am truly sorry.

‘I remain more committed than ever to support anti-racism efforts and will do everything in my power to right this wrong.’

A close friend of Meghan Markle’s told DailyMail.com the Duchess was outraged by Mulroney’s exchanges with Exeter, and her threats to sue the influencer.

‘Meghan is absolutely mortified that she’s been dragged into this complete mess. She said Jessica is in no way a racist, but the way she handled the situation (with the fashion influencer) was tone-deaf and heartbreaking,’ the source said.

‘Meghan said friends reflect friends and because of what’s at stake she can no longer be associated with Jessica, at least not in public. She has to do what she has to do in order to preserve her dignity and her own reputation.’ 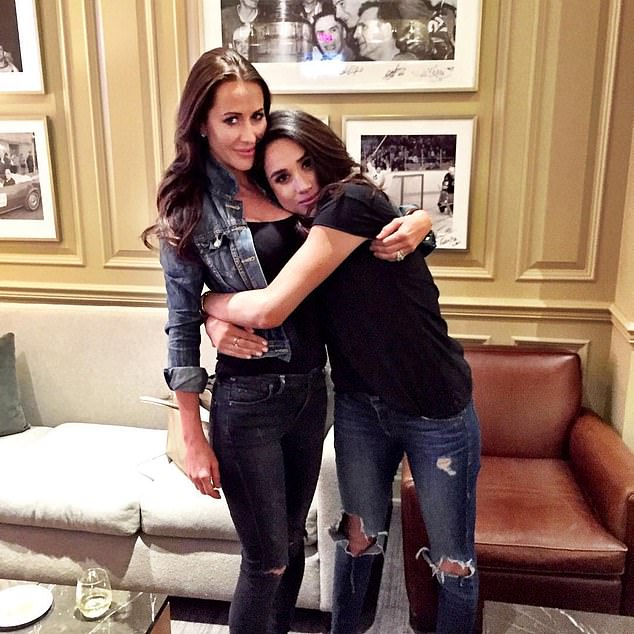 ‘Meghan is absolutely mortified that she’s been dragged into this complete mess. She said Jessica is in no way a racist, but the way she handled the situation (with the fashion influencer) was tone-deaf and heartbreaking,’ a close friend of Meghan’s said 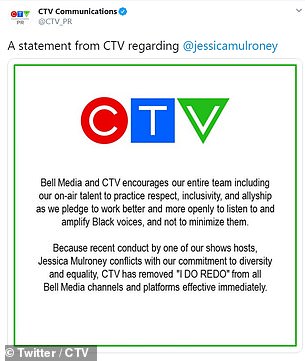 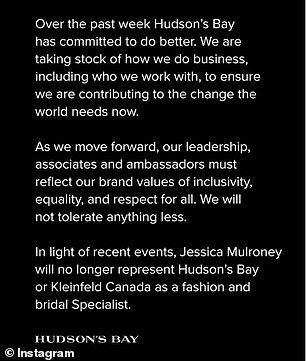 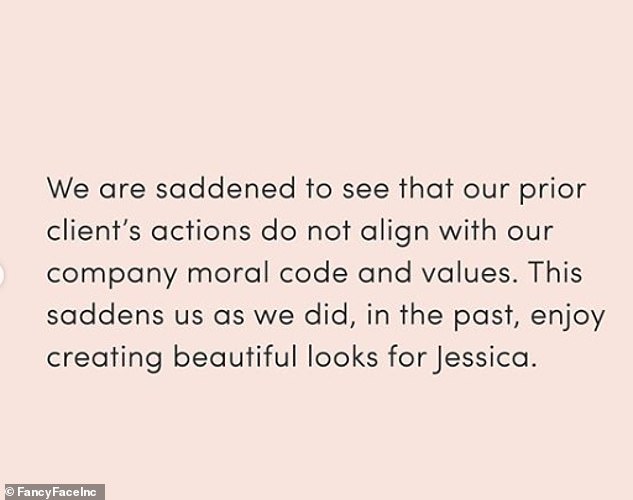 Beauty Brand Fancy Face Inc. that Mulroney also worked with cut ties with her on Friday 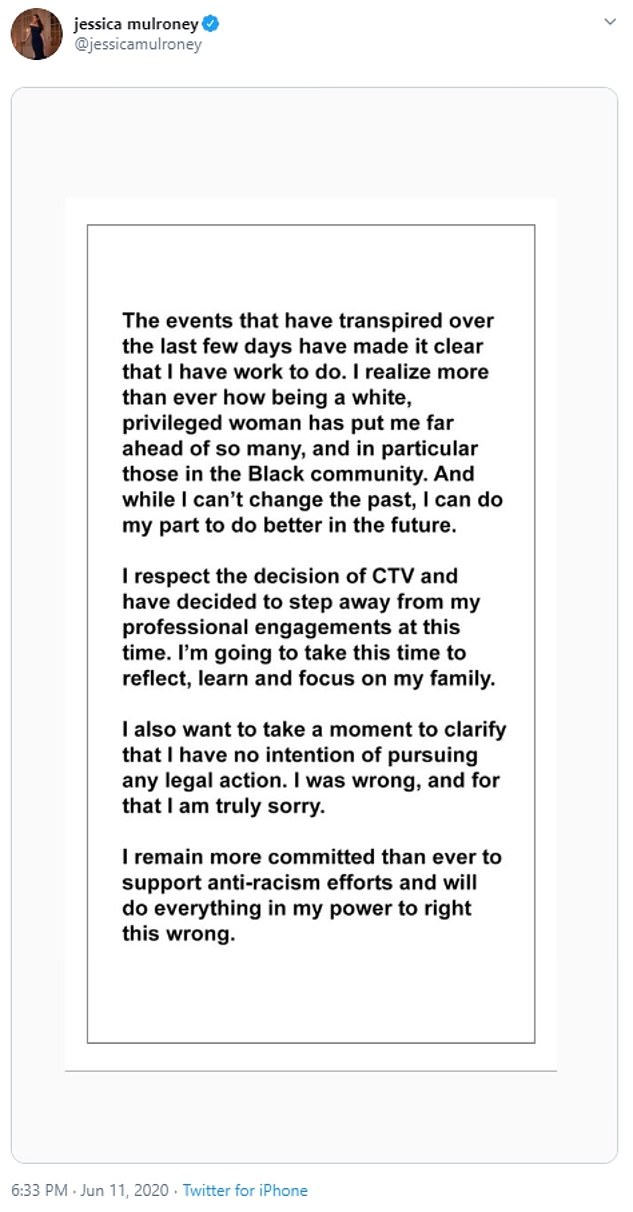 Mulroney issued a statement after her firing, saying she respects CTV’s decision and is sorry for her actions

The source added that they ‘wouldn’t be surprised’ if this marked the ‘beginning of the end of their friendship’.

They also said that Meghan cannot publicly defend Mulroney in this case or help salvage her career.

In a statement to DailyMail.com on Friday, a GMA spokeswoman said: ‘As Jessica Mulroney said last night, she is stepping away from her professional engagements and that includes Good Morning America. She will no longer appear on our show.’

ABC’s decision to sever ties with Mulroney came after staffers told DailyMail.com that they wanted her to be shown the door.

‘Why isn’t ABC firing her? Her actions are completely unacceptable and do not reflect the values of Good Morning America.

‘We have a wonderfully diverse team – yet Jessica used her privilege to get her job and should be fired for her behavior in abusing it.

‘CTV quickly fired her and many Canadian brands have done the same, why aren’t we doing that? This sends the wrong message.”

‘Plus she should be fired for working on a news show and not being able to spell libel.

‘ABC needs to take a stand. What are they afraid of? P**ssing off Meghan and Harry or the Trudeau family?

‘The abuse of privilege here is outrageous,’ the staffer said. 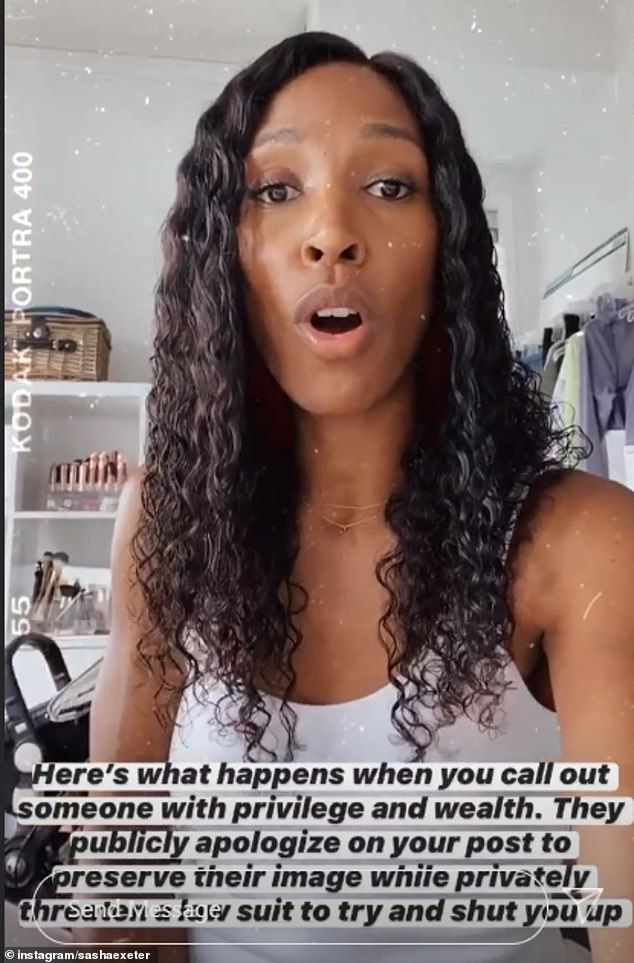 Hours after posting her initial video about her argument with Mulroney, Exeter claimed to have been sent further messages ‘threatening a law suit to try and shut you up’ 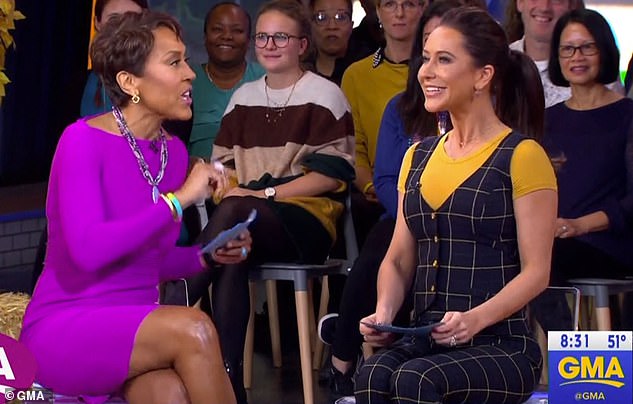 Mulroney was a fashion contributor on the wildly popular morning show Good Morning American until her firing Friday. She is seen with host Robin Roberts

‘I am a friend. I am also a Black woman. The emotional labour often falls on our backs to speak up, push through and fight hard,’ Moore said.

‘Let’s unlearn lashing out at Black women as a legitimate response to feeling called out.’

Exeter, meanwhile, said her exchanges with Mulroney left her feeling ‘paralyzed in fear,’ wondering what she was saying to her brand partners or potential brands she might want to work with.

Sharing the video with her 58,000 followers, she explained: ‘Very early on in this, I was very vocal about wanting my peers with an online presence to speak up, stand up and use their voice for good to help combat what’s going on with this race war.’

‘I’m by no means calling Jess a racist, but she is very well aware of her wealth, her perceived power and privilege because of the colour of her skin.

‘And that my friends, gave her the momentary confidence to come for my livelihood in writing. Textbook white privilege really.’

The influencer accused Mulroney of ‘never wanting to stand up and use her voice in the first place’ and ‘not understanding why she needed to’.

Exeter suggested that Mulroney felt ‘sharing that this really wasn’t a problem that she wanted to share on her social channels’, used ‘excuses that she would be bullied by the public and media’, and ‘claimed her show was more important to promote.’

Revealing the ‘threatening’ message, Exeter said: ‘I’m still shaking my head at this attempt and the audacity she had.’

The Duchess of Sussex’s close friend, unofficial wedding planner, and long-distance stylist is one of the most well-connected women in Canada.

She is married to Ben Mulroney, the oldest son of the former Canadian Prime Minister Brian Mulroney, and the couple live in Toronto with their three children; twins Brian and John, and their little girl, Ivy.

Listing herself as an expert in brand strategy and PR on her very active Instagram feed, Jessica is also a wedding planner and the founder of the Shoebox Project, a charity initiative that distributes shoeboxes full of gifts to women in need. 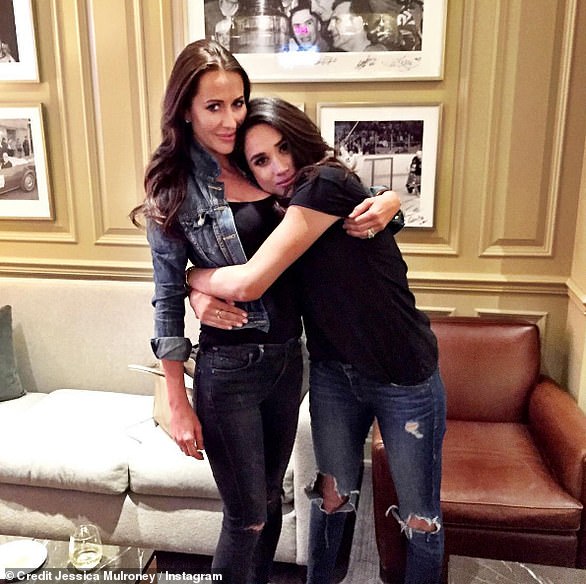 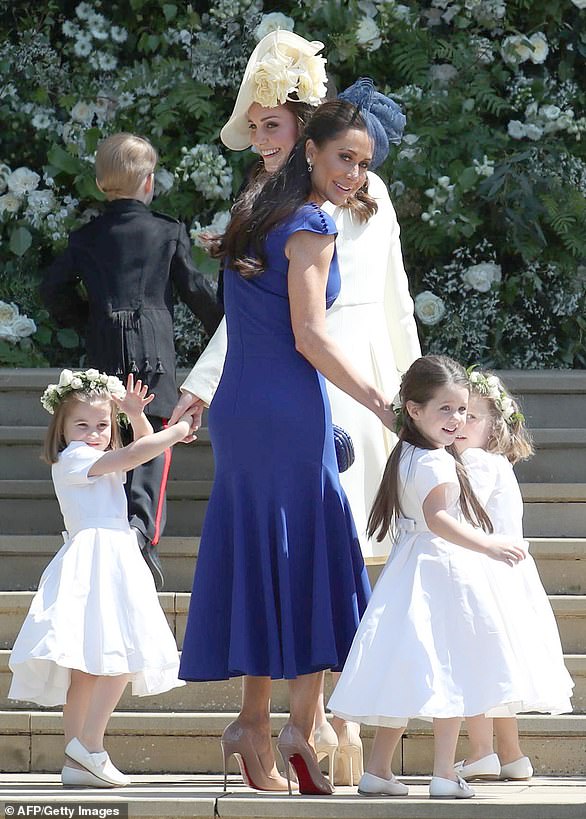 Support: Jessica, seen helping her flower girl daughter Ivy up the steps of St George’s Chapel along with the Duchess of Cambridge at Meghan and Harry’s wedding in May, is open about her family life on social media, and regularly remarks on juggling her busy career with raising three young children

The McGill University graduate was recently named among the 50 most influential people in Canada by the luxury lifestyle magazine Bay Street Bull, and counts multiple television personalities and female entrepreneurs among her close friends.

She is understood to have taken Meghan under her wing when the then actress was living in Toronto while starring in suits.

The pair are so close Ivy was a flower girl at the royal wedding in May, while Brian and John were page boys given the special task of holding the bride’s train as she walked down the aisle in St George’s Chapel, at Windsor Castle.