It turned into a family affair when Jessica Simpson celebrated the launch of her fall 2022 collection at Nordstrom at The Grove in Los Angeles on Saturday.

The singer/actress turned entrepreneur hosted a meet and greet with fans that included her husband Eric Johnson and their three children: daughters Maxwell, 10, and Birdie, three, and son Ace, nine.

The fashion designer has called her new collection a blend of bold colors and silhouettes with a bit of that California cool girl vibe.

Promo mode: Jessica Simpson, 42, held a meet and greet in promotion for her the launch of her new fall collection at Nordstrom at The Grove in Los Angeles on Saturday

For the event, Simpson, 42, showed off her svelte figure decked out in black shorts, a skintight top, a black and silver-patterned cropped jacket.

She also added a pair of black knee-high boots to the ensemble that were adorned with fringe along the sides.

She accessorized with a belt, several rings, earrings and necklaces.

Rounding out her overall look, the former reality show star had her blonde tresses styled long and flowing down the front of her chest and past the middle of her back with a center part. 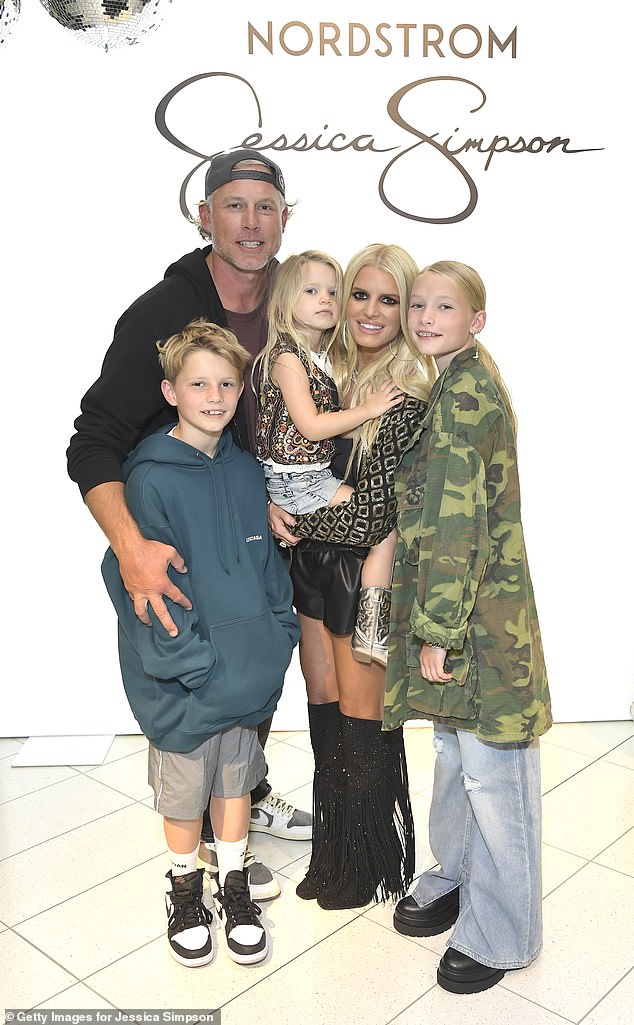 Family affair: The actress and singer turned entrepreneur snuggled up with husband Eric Johnson and their kids Ace, nine, Birdie, three and Maxwell, 10, at the event 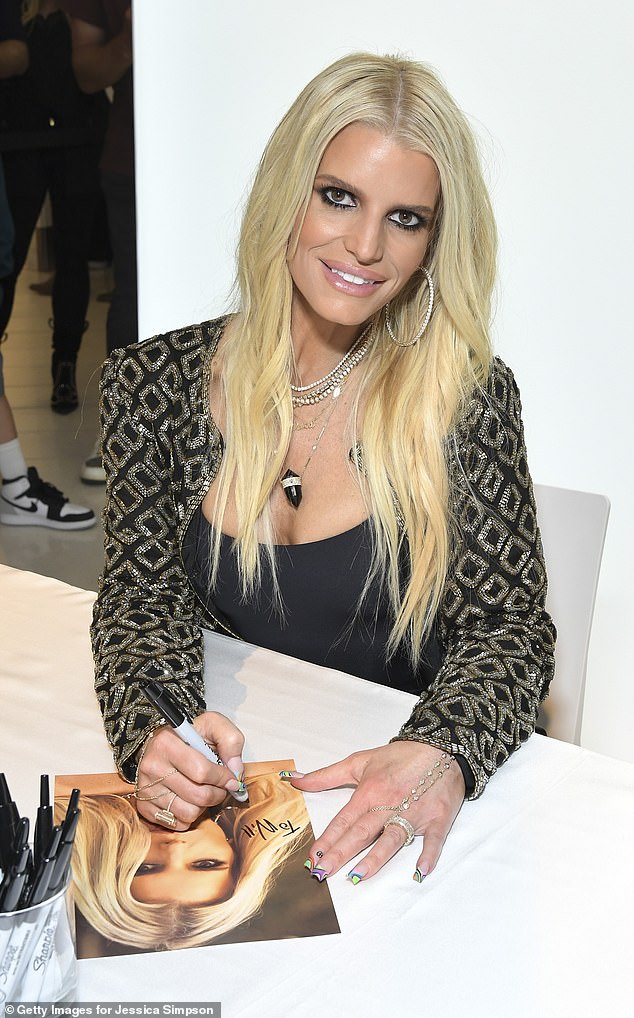 Fan friendly: The fashion designer donned an all-black ensemble for the promotional event that included signing autographs for fans and customers

Ahead of meeting fans and customers, Simpson snuggled up next to her husband of just over eight years, while holding Birdie in her arms.

Johnson, 43, who played tight end with the San Francisco 49ers and New Orleans Saints during his NFL career in the 2000s, kept it sporty in black pants with a matching hoodie over brown t-shirt and white Nike sneakers.

He wrapped his right arm around the couple’s son, who wore a blue hoodie with gray shorts and black and white sneakers.

The couple’s oldest daughter, Maxwell, showed off her personality in a long camouflage jacket over a black t-shirt and faded blue jeans. 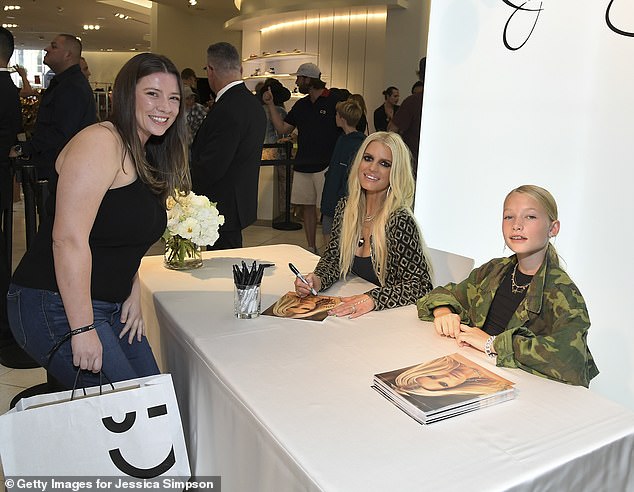 Mama’s girl: Simpson had her oldest daughter, Maxwell, by her side as she greeted fans 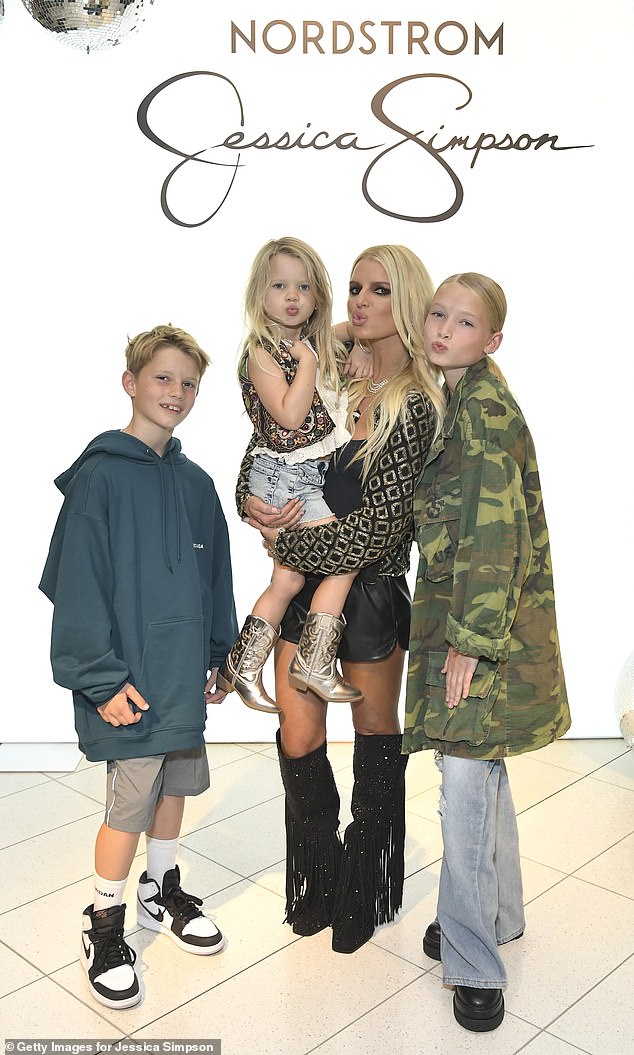 Proud mom: The former reality star, who revealed she lost 100 lbs after giving birth to her daughter Birdie three years ago, puckered up her lips with her two girls for a photo

Maxwell, whose been called her mother’s ‘in-house photographer’ due to her handy work with cameras, staying by Simpson’s side as she sat down to sign autographs during the meet and greet.

The event also included a special performance by the LA Roller Girls, who typically wow audiences with a mixture of dancing, footwork and acrobatics.

At one point, Simpson struck a pose alongside four of the LA Roller Girls, who were all decked out in skimpy blue denim shorts with white crop tops.

The new collection includes mainstays that Simpson’s brand has become known for, like flowy dresses and platform shoes. But this go-around she decided to amp things up in order to give people everyday staples as well as items that makes feel confident. 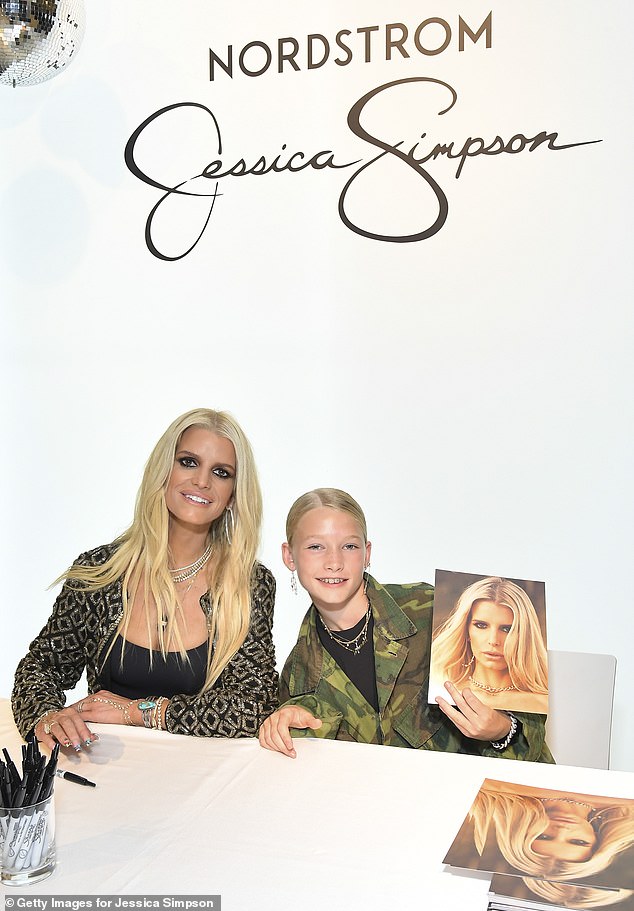 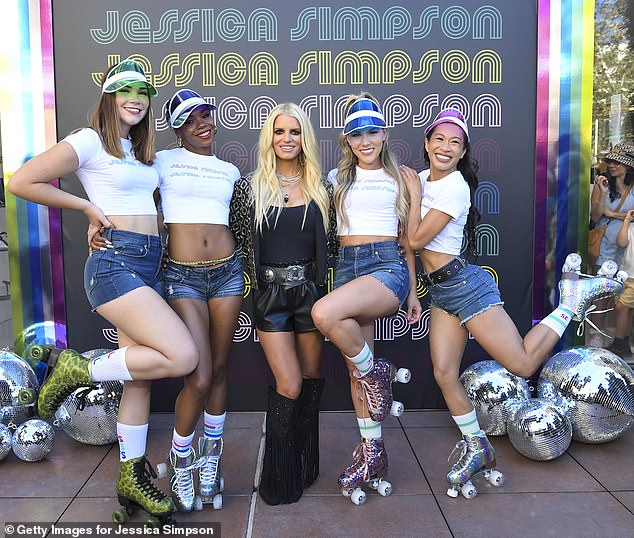 Ladies on wheels: The promotional event also included a special performance by the LA Roller Girls, who typically wow audiences with a mixture of dancing, footwork, and acrobatics, all while on roller skates

‘I go through phases and stages based on how I feel in my own creative space,’ Simpson recently told People, adding, ‘Right now in my career I am inspired by TV and film and want to bring retro glam to our all American denim staple styles. Fashion is experimenting and channeling different parts of ourselves and our lives through what we wear and this campaign allowed me to give it life.’

The fashion designer went on to describe the new latest launch a mix of ‘classically inspired pieces to mix and match or wear head to toe.’

It’s now been almost three years to the day since Simpson debuted her trimmed down, toned figure, that was the result of a 100-pound weight reduction following the birth of Birdie, as reported by a number of publications, including Women’s Health. 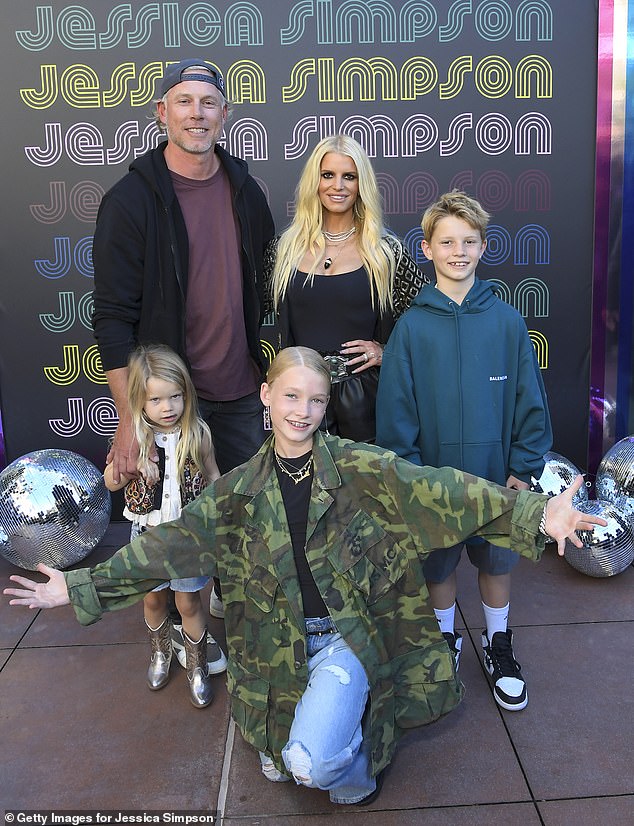