Jessica Simpson embraced the festive season in a stylish Instagram photo shared on Friday while posing near a one-of-a-kind Christmas tree.

The fashion designer, 42, showed off her slim frame wearing a colorful jacket and fitted jeans, after revealing she had lost 100 pounds earlier this year.

The beauty recently shared a holiday-themed photo series as she spent time with her loved ones, including husband Eric Johnson and their three children, daughter Maxwell, 10, son Ace, 9, and three-year-old daughter, Birdie.

Feeling festive: Jessica Simpson, 42, uploaded a new stylish post on Instagram on Friday while getting into the holiday spirit

The Dukes Of Hazzard actress donned a pair of faded gray jeans that were partially covered by black, combat-styled boots.

She added a long-sleeved blue shirt that was left partially unbuttoned, revealing a plain white shirt underneath. The top blouse contained patterns embroidered onto the fabric, along with sparkling rhinestone details.

Jessica completed her winter-themed ensemble by slipping on a vibrant blue, tweed jacket with a black, furry trim.

The singer opted to not add any words to the caption of the post, and instead simply added a red and green heart emoji to kick off the holiday weekend. 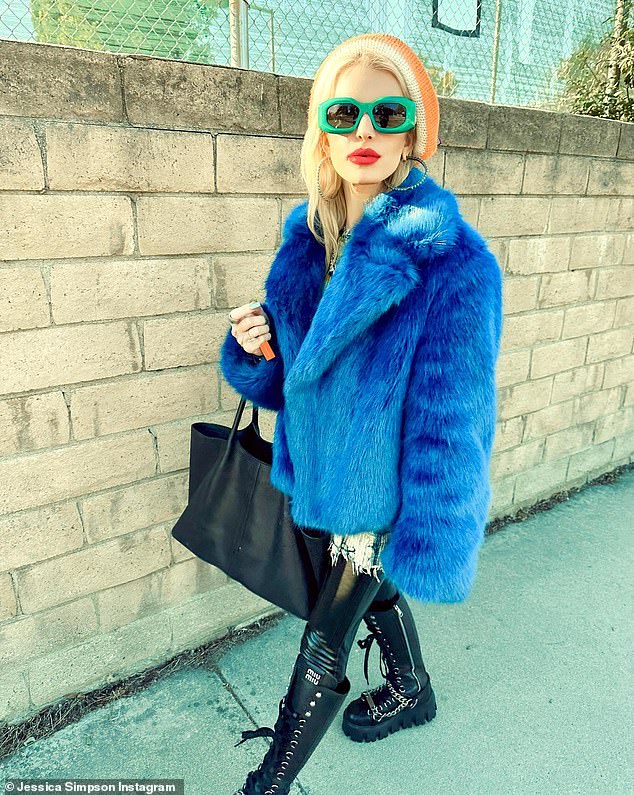 Embracing the season: The actress and singer previously shared a holiday-themed photo series as she shared special moments with her family

Jessica accessorized her festive look by donning a pair of round, blue-rimmed sunglasses along with large, silver-hooped earrings.

She held a luxurious red, white, and black Celine purse in her right hand as she posed for a quick snap.

Her blonde locks were parted in the middle, and effortlessly fell down straight past her shoulders in a sleek yet simplistic style. For a finishing touch to her overall look, Jessica added a bright red lipstick.

The mother of three posed in a room that contained wooden flooring and exquisitely carved bookshelves that lined the walls.

Numerous books and items filled the shelves, such as Jessica’s 2004 ReJoyce: The Christmas Album, that was subtly facing towards the camera on the bottom right of the photo.

A red Christmas tree was placed in the corner directly behind her, and contained a variety of black and white ornaments. An array of classic white lights helped illuminate the dark paneled room. 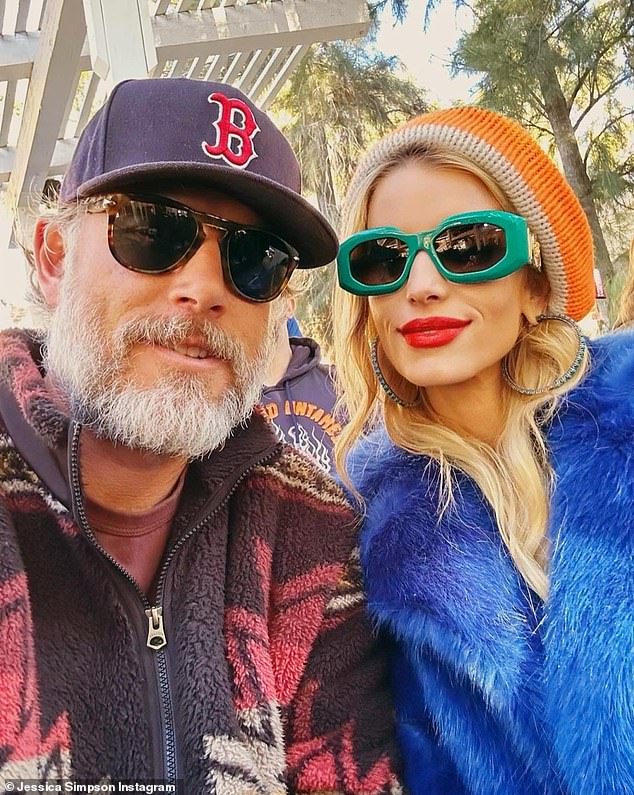 Quality time: The businesswoman has been spending time with her family during the holiday season, including husband, Eric Johnson, whom she tied the knot with in 2014 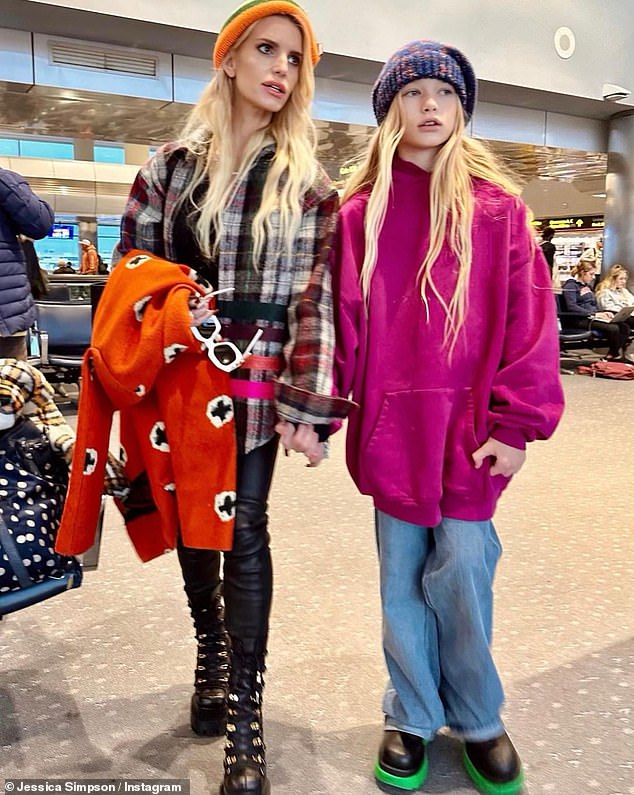 Family: Along with a recent photo series, Jessica also uploaded memorable snaps from her Aspen trip with her loved ones; the fashion designer seen with her daughter, Maxwell, 10

Jessica has been capturing moments with her family during the holiday season and has shared the photos to her 6.1 million followers on Instagram.

The star, who was previously married to Nick Lachey, also traveled to Aspen and enjoyed the snowy slopes at the resort destination.

The TV personality tied the knot with former NFL player, Eric Johnson, in 2014, and the couple share three children together.

When opening up about her marriage to the sports star to Us Weekly in the past, Jessica expressed, ‘In terms of my marriage to Eric, I have never felt more myself or more free,’ adding that, ‘Eric and I have a true mind, body and soul connection.’

She also humorously admitted to Extra earlier this year in September that she was still, ‘pretty obsessed’ with Eric. 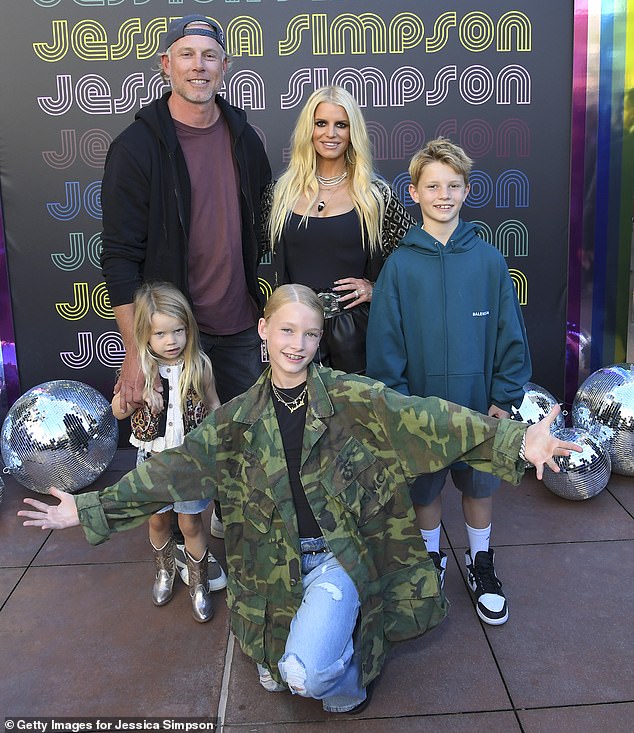 Happy: When talking about her marriage of eight years with her former sports star husband, Jessica told Extra that she was still ‘pretty obsessed’ with him; Jessica, Eric, and their three children seen in September in Los Angeles 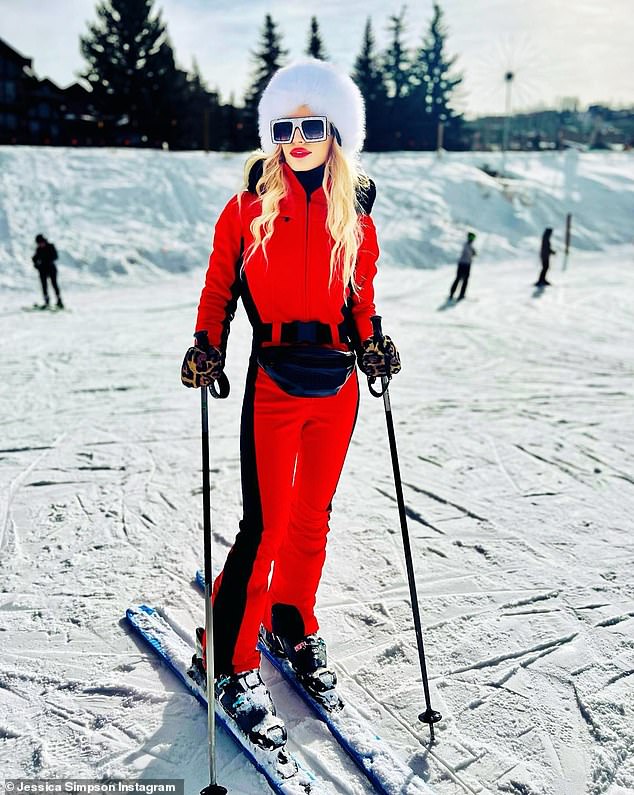 Weight loss journey: Earlier this year, Jessica had revealed she had lost around 100 pounds

The entrepreneur also discussed recently losing 100 pounds with the publication, explaining that her weight loss journey began when she, ‘went to a nutritionist, and I needed to get my eating habits right.’

Over the years, Jessica admitted that she has, ‘been criticized, and it hurts, but I’ve been every weight and I’ve been proud of it.’

After focusing on adjusting her ‘eating habits’ and diet, the star expressed, ‘I absolutely feel healthy. I don’t know. I feel like my old self before I had children and all the hormones going wild.’

The Employee Of The Month actress further added that, ‘I feel younger, actually. I have a lot more energy.’