Jesy Nelson has professed her love for new boyfriend Sean Sagar after going Instagram official with the actor.

The Little Mix singer, 29, posted her first pic with Sean, 30, on Friday and as he did the same on Monday she shared a gushing post declaring her love for him.

The timing of the declaration was slightly awkward, however, as on the same evening Jesy was seen talking about her desire to have children with ex Chris Hughes in his new BBC documentary. 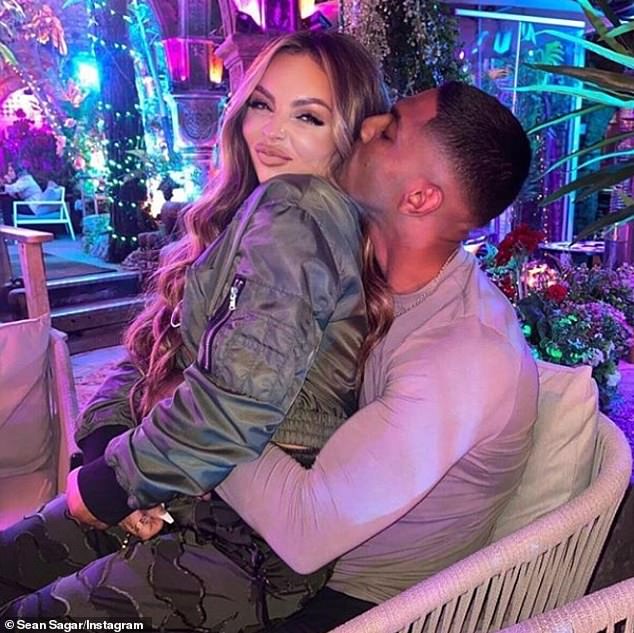 Cute couple: Jesy Nelson has professed her love for new boyfriend Sean Sagar after going Instagram official with the actor

Undeterred by the timing, Sean shared an adorable Instagram snap planting a kiss on Jesy’s cheek as she sat on his lap and smiled for the camera.

The smitten actor captioned the shot, ‘The reason for my happiness ❤️’, as Jesy commented, ‘My baby I love you so much’.

Earlier that night, Jesy was seen on the BBC documentary, Me, My Brother and Our Balls, which followed her ex Chris, 27, and his brother Ben as they looked at male fertility. 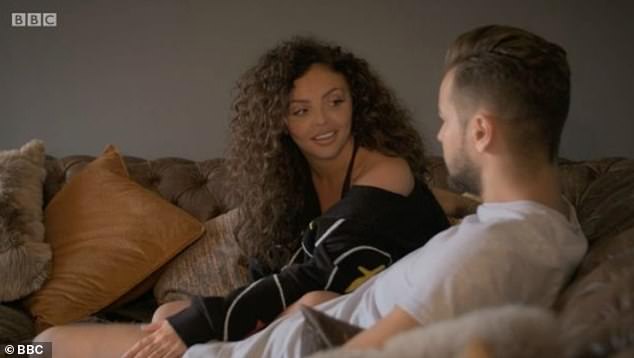 Timing: The timing of the declaration was slightly awkward as on the same evening Jesy was seen talking about her desire to have children with ex Chris Hughes in his new documentary

Although the show was made available on iPlayer last month, it aired on BBC One for the first time on Monday evening.

In scenes captured before the breakdown of their 16-month relationship, Jesy was the first person Chris called after being told by doctors the quality of his sperm has improved following years of fearing he may struggle with fertility issues.

The Love Island star was then seen reassuring his ex-girlfriend that they could have ‘three or four babies’. 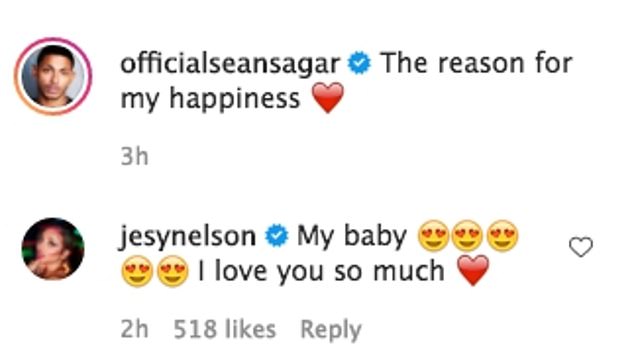 Smitten: Undeterred by the timing, Sean shared an adorable Instagram snap planting a kiss on Jesy’s cheek and the couple left gushing comments for each other 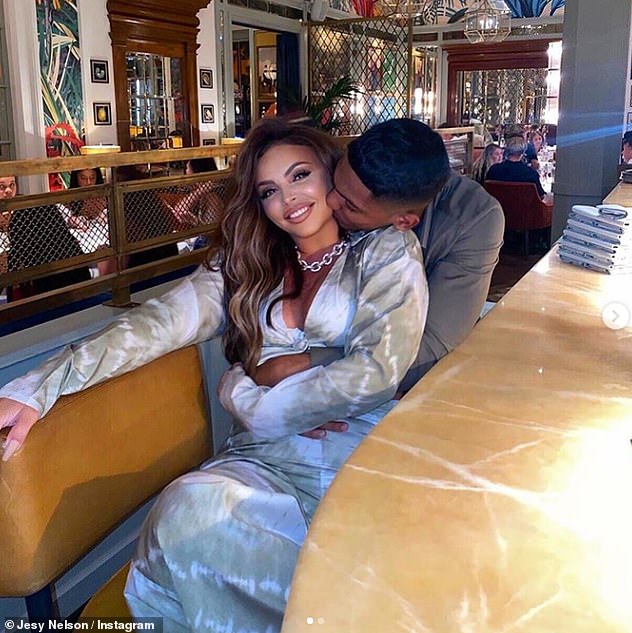 Sweet: Jesy went Instagram official with beau Sean as she shared loved-up snaps with the actor on Friday and claimed he was ‘everything’ to her

Speaking on the show, Chris, said: ‘I’ve just got to tell her the good news. It’s been a worry for us both, so.

‘Oh Jessica, I have a lot of sperm and they’re very, very active. I’m really happy.’

Jesy replied: ‘Yay, so we can have lots of babies?’ to which Chris said: ‘I think we can probably have three or four.’

Later in the episode, Chris referenced his breakup with Jesy as he admitted that he feels his sperm is ‘wasted’.

He explained: ‘I just think it’s so unfair that I was given the good news that I have healthy sperm, active sperm and now that I’m single it feels kind of wasted because you’ve got a couple in Ben and Olivia [Chris’ brother and girlfriend] who are so ready to make that commitment.

‘It just feels that life is unfair.’ 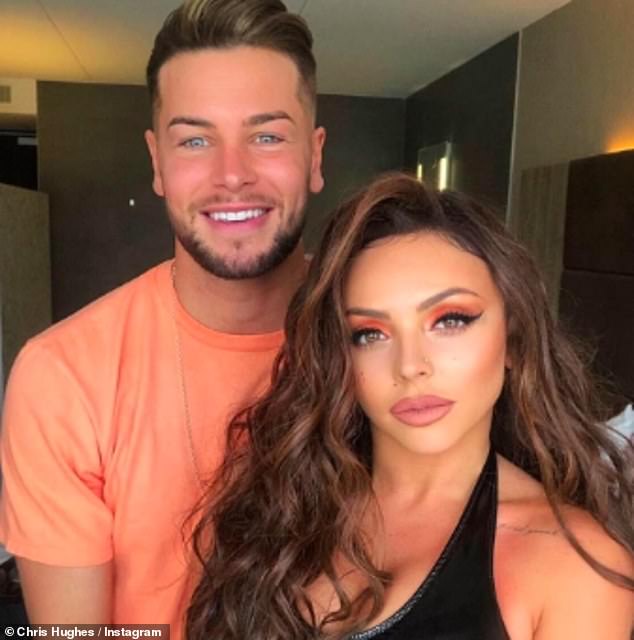 Happier times: Jesy and Chris dated for 16 months and she featured in BBC documentary, Me, My Brother and Our Balls, which followed Chris and his brother Ben as they looked at fertility

Viewers were left emotional seeing the scenes play out on camera, tweeting: ‘Jesy and Chris They were so cute together such a shame #MeMyBrotherandOurBalls’;

One viewer, however, pointed out that we should be embracing that Jesy is happily loved-up, tweeting: ‘I loved Jesy and Chris but Jesy and Sean is just another level’.

Jesy went Instagram official with her beau Sean as she shared loved-up snaps with the actor on Friday.

Clearly enamoured with Sean, Jesy gushed in the caption that he was ‘everything’ to her, as she also shared a love heart emoji for good measure.

New couple Jesy and Sean finally confirmed their relationship last month during a beach date in Brighton after weeks of claiming they were ‘just friends’.

Jesy began dating Sean shortly after her split from Chris, she broke off their relationship over the phone in April following a 16 month romance. 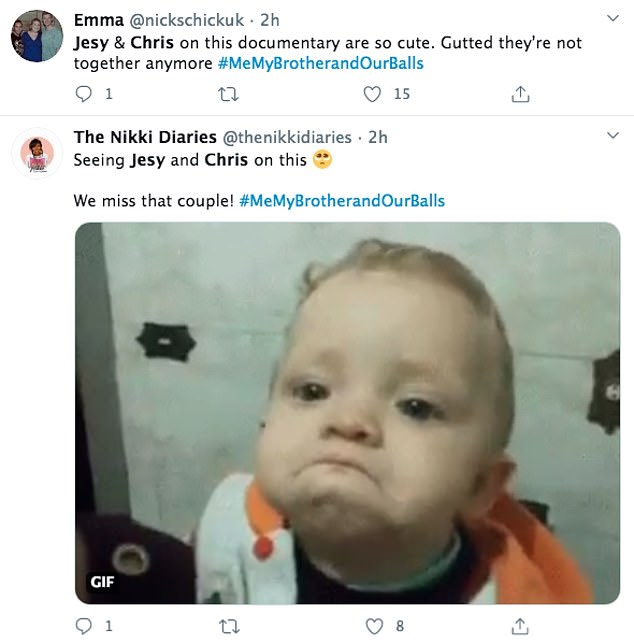 Emotional rollercoaster: Viewers were left emotional seeing the scenes play out on camera

Earlier this month, it was alleged that her hunky new beau is on celebrity dating app Raya.

In a screenshot of his profile obtained by The Sun, Sean’s cover image is a shirtless snap and lists his profession as acting and his location as London.

It is unclear whether Sean’s dating app profile is an active profile or an old one from before he started dating the singer.

Raya is a private members-only app where users must be invited and have to link their account to their Instagram page.

Although the service was originally just for dating, features now promote professional networking for those in the entertainment industry.