Jews make up lowest share of Europe’s population for 1,000 years amid fears over anti-Semitism

Jewish people make up the lowest share of Europe’s population for a thousand years a new study has found, as France sees a surge in emigration due to anti-Semitism.

The study, published on Wednesday, found 1.3 million people living in continental Europe, the United Kingdom and Turkey who describe themselves as Jewish – 60 percent lower than in 1970 when there were 3.2 million in the same area.

Undertaken by the London-based Institute for Jewish Policy Research, the release of the study comes after a teacher was beheaded in a Paris suburb by an Islamist last Friday.

The Star of David is seen on top of the synagogue in Halle, eastern Germany, on October 9, 2020, on the first anniversary of the anti-Semitic attack on the synagogue. A report has found that the numbers of Jewish people in Europe are on the decline. The most well-documented reasons for the exodus of French Jews included anti-Semitism

France was specifically noted in the study as being responsible for much of the decline in Western Europe.

At the current rate of decline, France will be overtaken by Canada which according to the World Jewish Congress currently has around 391,000 Jews, said Sergio DellaPergola, one of the report’s authors.

The report said that the most well-documented reasons for the exodus of French Jews included anti-Semitism and economic opportunity.

‘France today is a place where a history teacher can get beheaded on the street,’ DellaPergola said, noting a suspected Islamist’s alleged actions last week. ‘Of course many Jews, including French ones, find Canada more hospitable.’

The decline follows the death of about six million European Jews in the Holocaust between 1941 and 1945 in Nazi Germany and German-occupied Europe.

Now, the decline in population numbers is mostly down to the emigration of over 1.5 million people following the collapse of the Iron Curtain at the end of the Cold War in 1991.

‘The proportion of Jews residing in Europe is about the same as it was at the time of the first Jewish global population account conducted by Benjamin of Tudela, a Jewish medieval traveler, in 1170,’ the authors wrote.

By 1900, Jews in Europe had grown to make up 83 percent of the world’s Jewish population, but they now account for just nine percent of Jews worldwide, the study’s data shows.

The report says that Germany’s Jewish community in particular is in a ‘terminal’ state, with 40 percent of it 118,000 Jews above the age of 65, and fewer than 10 percent under 15.

A similar problem is found in Russia and Ukraine, too, which ‘foreshadows high death rates and unavoidable future population decline,’ the study says, which also notes that there are an additional 2.8 million people living in Europe who are eligible to move to Israel through virtue of Jewish grandparents. 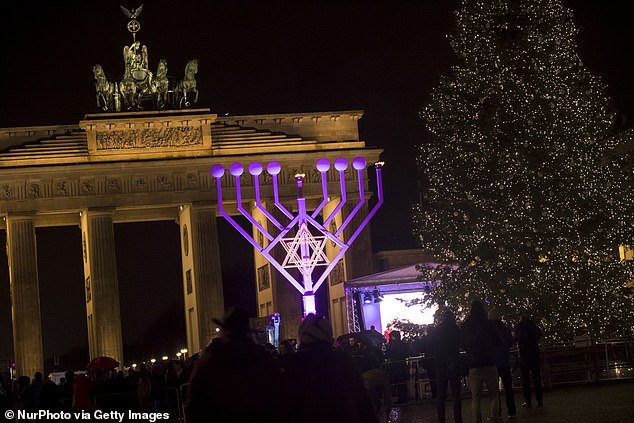 Pictured: A Hanukkah menorah is pictured after a public lighting ceremony in front of Brandenburg Gate in Berlin, Germany. The report says that Germany’s Jewish community in particular is in a ‘terminal’ state 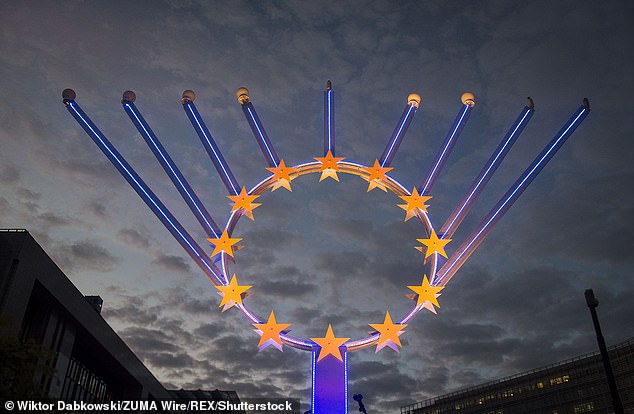 Speaking to the Jewish Telegraphic Agency in an interview about the report, DellaPergola said the demographics of Europe’s Jewish population would have been ‘totally different’ without the impact of the Holocaust.

‘But that was 75 years ago, and some of the trends we’re seeing today, which are driving the decline, have little to do with the genocide,’ he noted.

Those trends include an increasing intermarriage rate and a decline in the reproduction rate of Jewish couples, tied to a broader drop in Europe’s birthrate in recent years.

‘Only under exceptional circumstances do demographic trends radically modify their course,’ the authors wrote.

But, they added optimistically, ‘such modifications have actually occurred more than once in European Jewish demography during the last hundred years alone.’

The new number are quite significantly different from membership numbers provided by other Jewish organisations.

The European Jewish Congress’ website says there are 1,929,650 Jews in Europe today – nearly 33% more than the number arrived at in Wednesday’s report. The World Jewish Congress states 1,438,000 Jews are living in Europe.