The lawyer representing the family of British jihadi bride Shamima Begum has claimed she is ‘traumatised’ and has likened her to a First World War soldier.

The 19-year-old, who left Bethnal Green in east London to marry an ISIS fighter in Syria, gave birth to a baby boy in a Syrian refugee camp on Saturday.

Today, a lawyer for her family, Tasnime Akunjee, went on ITV’s Good Morning Britain to insist the government has a ‘moral duty’ to bring Begum back to the UK.

In controversial comments, he compared Begum – who chose to join ISIS in 2015 – to a shell-shocked World War One soldier.

He said: ‘It’s difficult to take what she said in the current circumstances and try to draw from the lack of emotion or otherwise she has. She’s a traumatised person.’

When show presenter Richard Madeley insisted she doesn’t look traumatised, Mr Akunjee replied: ‘You might have said the same thing about a First World War soldier in the middle of shell-shock… they are both in warzones.’

Shamima Begum (pictured giving an interview to Sky News yesterday) who left Bethnal Green in east London to marry an ISIS fighter in Syria, gave birth to a baby boy in a Syrian refugee camp on Saturday 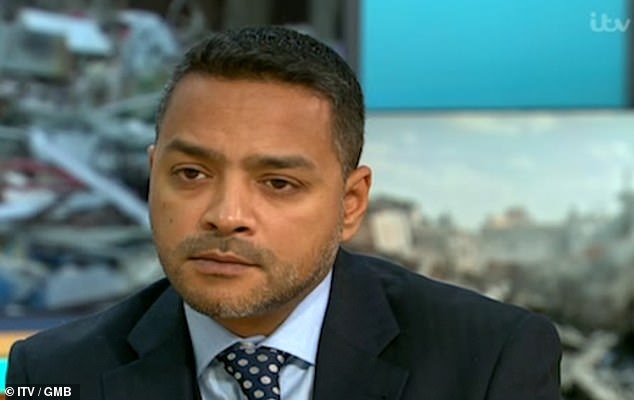 He told the programme: ‘The family are aware of how people feel. But it’s their daughter and their grandson, who came into existence yesterday.

‘I think any parent would think the same thing. They want them home. It wouldn’t matter if the whole planet were against her.

‘She’s a British citizen at the end of the day. There’s an innocent child here, the baby. Bringing that child back into safety is a moral duty any state would have.’ 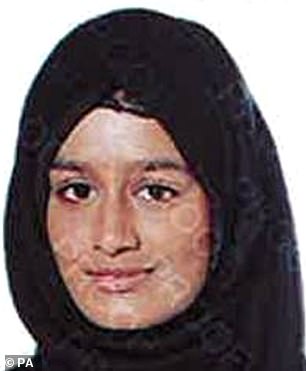 Mr Akunjee also said he believes Shamima is traumatised, but when host Richard Madeley claimed she ‘doesn’t look it’, he said: ‘You might have said the same thing about World War One soldiers in shellshock.’

Madeley was outraged, saying his WWI veteran grandfather found it very difficult to talk about what he went through.

He branded the lawyer’s comments ‘foolish’, but he replied: ‘In both cases the individuals concerned have gone through trauma.’

When Metropolitan Police Commissioner Cressida Dick appeared on the show this morning she was grilled on what she makes of Shamima’s bid to return home.

She said that if someone has been linked to a terrorist organisation abroad and they arrive at the British border ‘they will be questioned, investigated and possibly prosecuted.’

The policing boss also sought to reassure people that counter terrorism policing in Britain is sufficient to cope with the current threat. 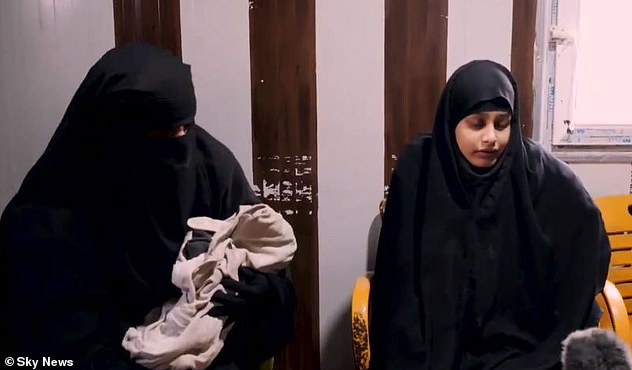 Shamima Begum being interviewed on Sky News yesterday just hours after giving birth to her son (thought to be being cradled by another woman, right) 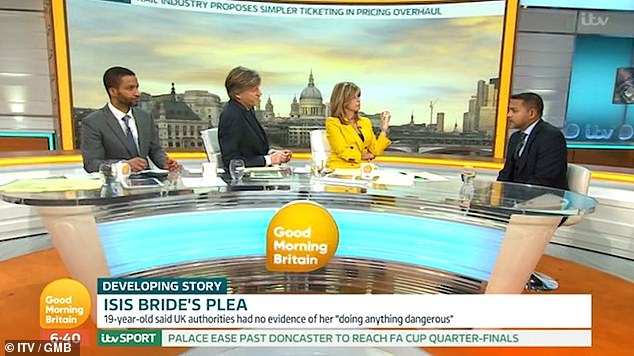 ‘She’s a traumatised person, finding herself in a camp, her husband isn’t by her side and that would have been all she had known.

‘What we’re saying is that she should be assessed by a professional. Then a view should be taken of what she’s saying.’

Who is family lawyer Tasnime Akunjee?

Tasnime Akunjee was hired by the families of the Bethnal Green girls after they ran away in 2015.

That year denounced the authorities for allowing Kadiza Sultana, 16, and 15‑year-olds Shamima Begum and Amira Abase to leave Britain.

He castigated the police for failing to inform their parents that a school friend had vanished in similar circumstances a few weeks earlier.

The lawyer has previously said that no Muslim should co-operate with the British police.

He justified his claim by saying the Government’s Prevent counter-terror policy is ‘straightforward, paid-for spying on the community’.

He has also claimed that the security services ‘created’ Michael Adebolajo — who with Michael Adebowale killed Woolwich Fusilier Lee Rigby — by ‘making his life so difficult’.

Asked if the teenager was ‘making up’ that she married a Jihadi and had two children who died, he said no.

He told the programme: ‘She was married to somebody who was a Dutch national, his parents confirmed that. So she is not making it up.’

He accepted that people are ‘repulsed’ by her lack of remorse, but he said one should expect that behaviour of someone who is ‘still in trauma’.

He also criticised local authorities in east London for failing to intervene before she and two other schoolgirls left for Syria.

Local council Tower Hamlets has not yet responded to requests for comment on Shamima’s bid to return to the UK.

His comments come after Begum said people should feel sorry for her and should allow her to return to Britain in a TV interview recorded at the refugee camp yesterday.

During his campaign for the family Mr Akunjee also told The Times Begum is similar to a soldier.

He told the newspaper: ‘The Nazis had the Nuremberg trials. They were given due process. This girl was a victim when she went out there at 15 years old.’

‘Our politicians are saying that he should be denied protections and due process that would have been granted to Nazis.’

In her extraordinary TV interview yesterday, Shamima appeared next to a woman in a niqab who was seemingly holding her child.

She spoke to Sky News from the refugee camp in northern Syria where she had the baby just hours earlier. 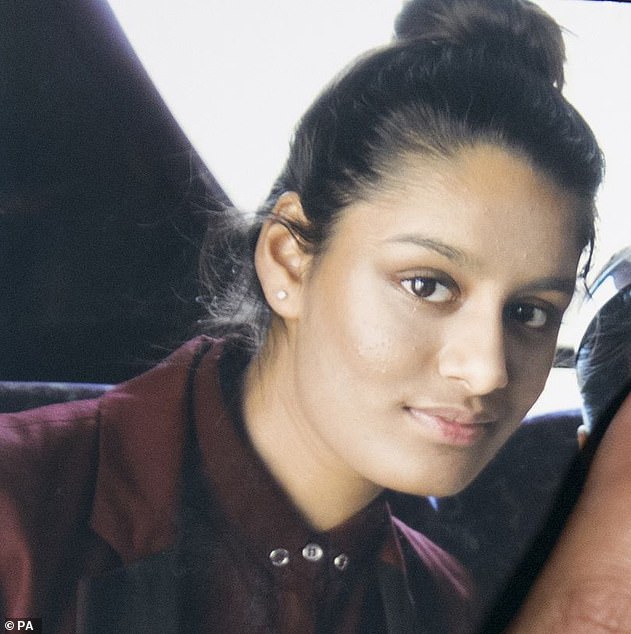 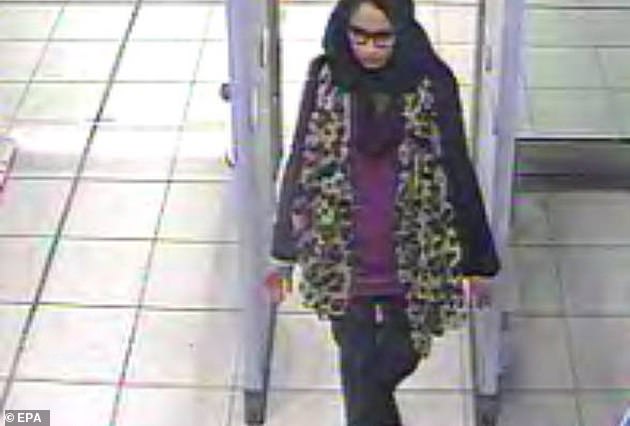 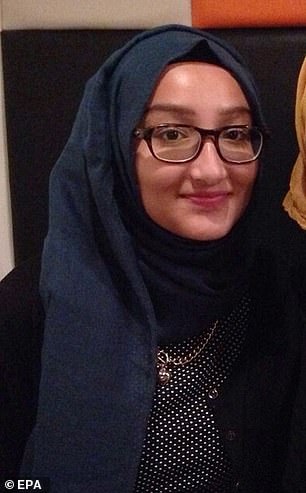 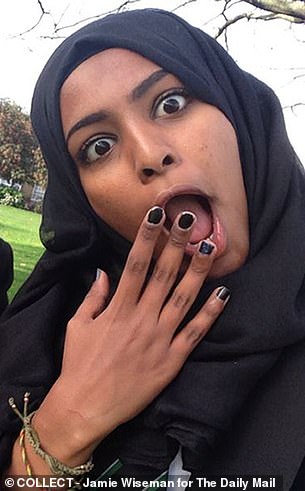 Kadiza Sultana (left) and Amira Abase (right) from Bethnal Green in east London, travelled with Shamima Begum to Syria in 2015

The teen said was ‘okay’ with ISIS beheadings and admitted it would be ‘really hard’ to rehabilitate her in Britain, hours after giving birth to a baby boy in a refugee camp.

‘It would be really hard because of everything I’ve been through now,’ she said.

Who were the five Bethnal Green girls who went to join ISIS?

Sharmeena Begum – Flew to Turkey from London Heathrow in December 2014. No relation to Shamima.

Unnamed 15-year-old – tried to go to Turkey on the same 2014 flight but was stopped before take-off.

Shamima Begum – One of the three who flew from London Gatwick to Turkey in February 2015 and then went on to Syria. Has pleaded to be allowed to return to the UK with newborn son.

Amira Abase – Flew out in 2015 with Shamima who said in yesterday’s interview she did not know whether Ms Abase was still alive.

‘I’m still kind of in the mentality of having planes over my head and an emergency backpack and starving, all these things. I think it would be a big shock to go back to the UK and start life again.’

After the Begum family lawyer spoke to GMB, hosts Richard and Kate interviewed a former Jihadi bride who left Britain to marry an ISIS fighter.

Tania Joya now lives in Dallas, Texas, USA, and has been rehabiltated.

She said: ‘I was a silly naïve teenager – Llike Shamima. I would have made the same mistakes.

‘It boils down to not being raised without the right values – of freedom of thought and western democracy.

‘We need to take her out of that environment, we need to educate her.’

Asked if she can be rehabilitated, Ms Joya said: ‘I believe so. Even if she doesn’t want to show it.

‘She shows arrogance right now. But I think that’s just a wall she’s putting up to cope.

‘Deep down inside I think she’s a very broken human being – very disturbed.’

She said British nationals who ‘come to our ports’ having been linked to ISIS in Syria will be questioned, investigated and possibly prosecuted.