First Lady Jill Biden stunned in a sparkly lilac fitted dress by Ralph Lauren at Saturday night’s G20 dinner, which took place at the 16th century Quirinale Palace in Rome. The leaders and spouses were split up at the dinner, which was hosted by Italian President Sergio Mattarella. Dr. Biden sat next to French President Emmanuel Macron, while President Joe Biden was seated next to European Commission President Ursula von der Leyen. 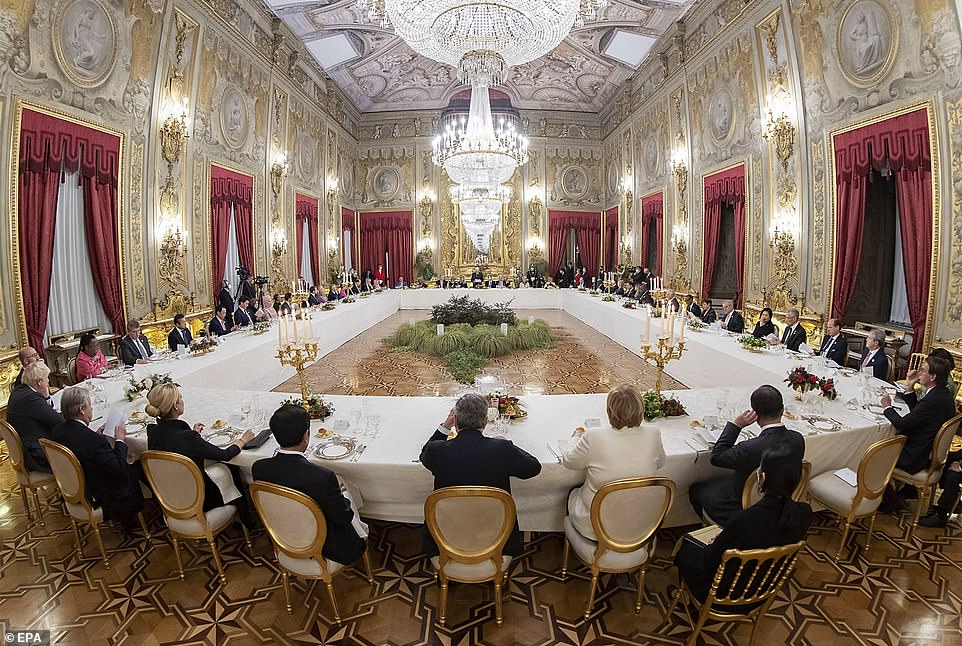 Jill Biden (upper left) was seated at the G20 dinner with French President Emmanuel Macron, who she spent time with in July when they both represented their countries at the opening ceremony of the Tokyo Olympic Games. The first lady and the French president watched several sporting events together after the ceremony. 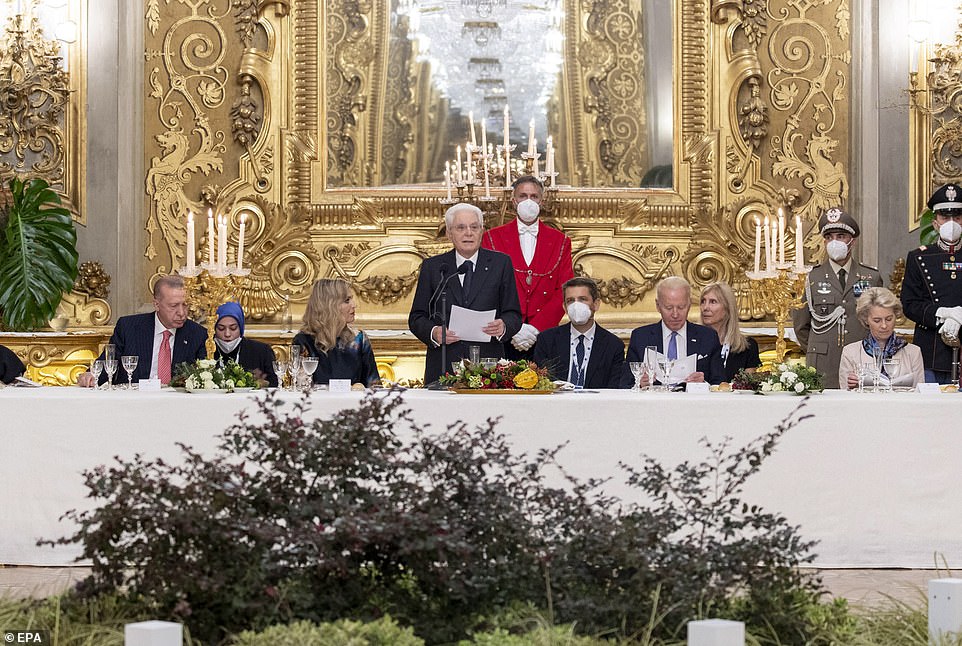 President Joe Biden (third from right) was seated next to European Commission President Ursula von der Leyen (right) during an official dinner at the G20 Saturday night in Rome. At dinner Saturday, the G20 leaders and their spouses were served a menu of marinated salmon, risotto with pumpkin and white truffle, roasted artichoke, seabass and vegetables. 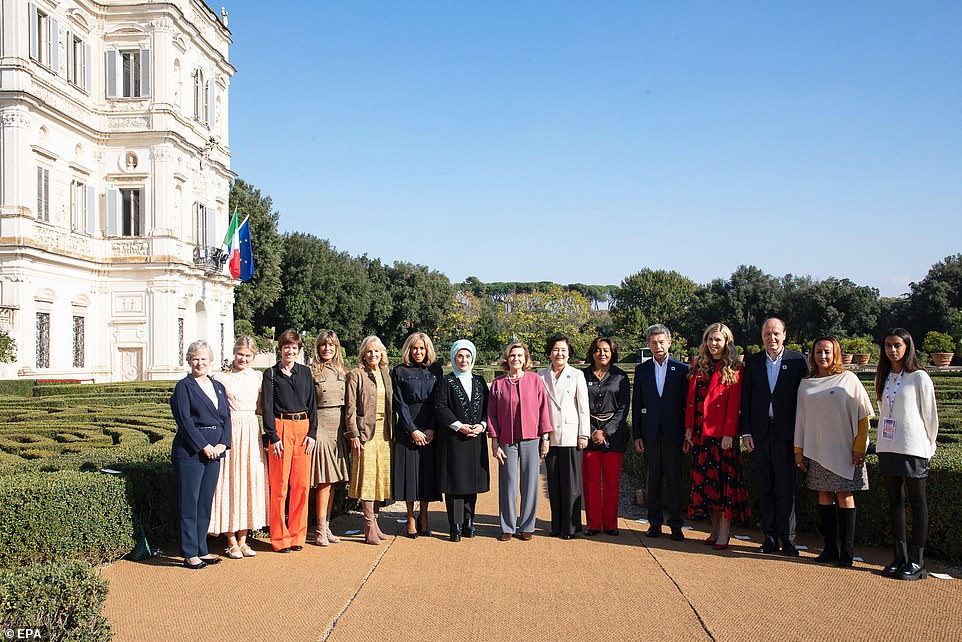 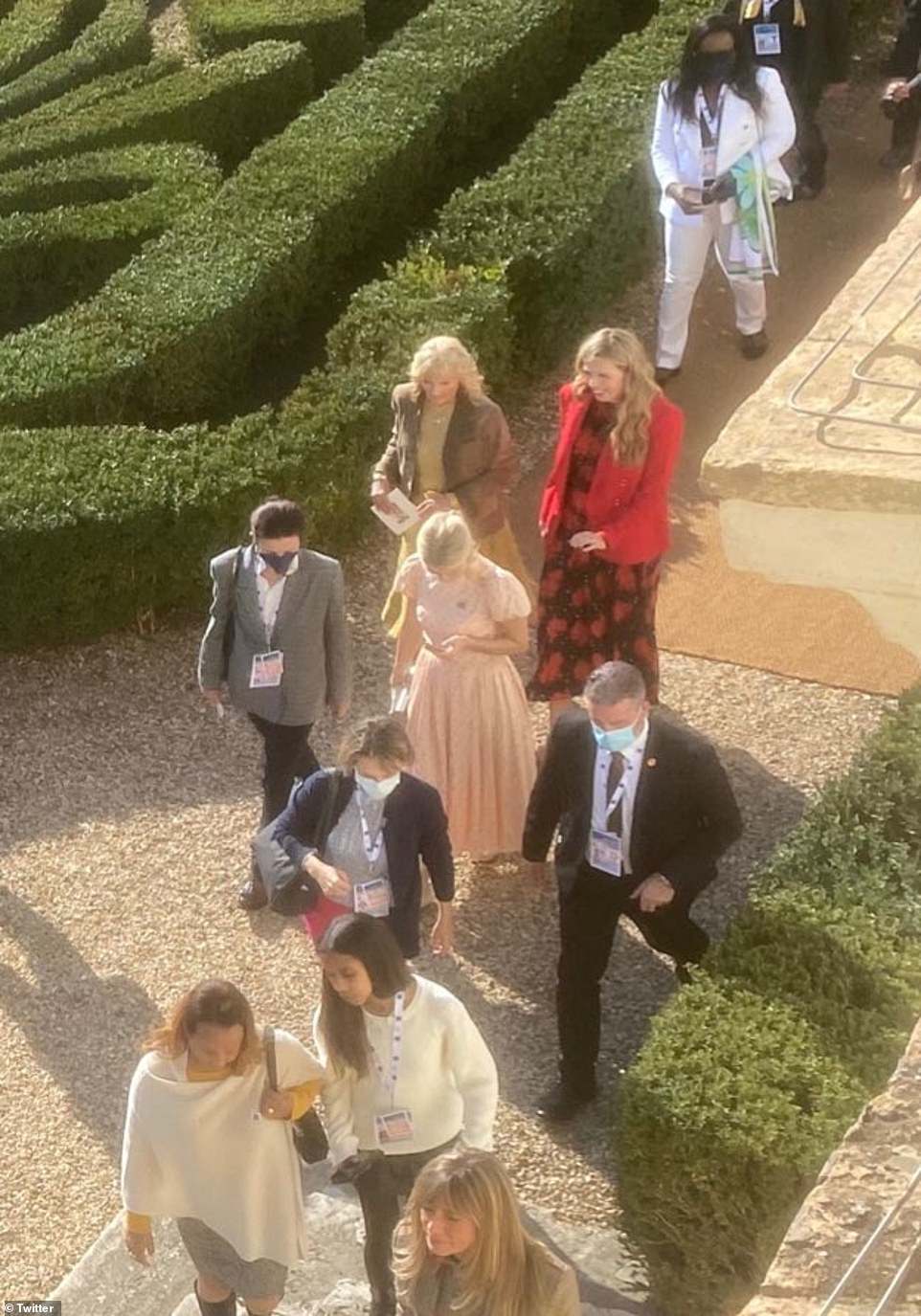 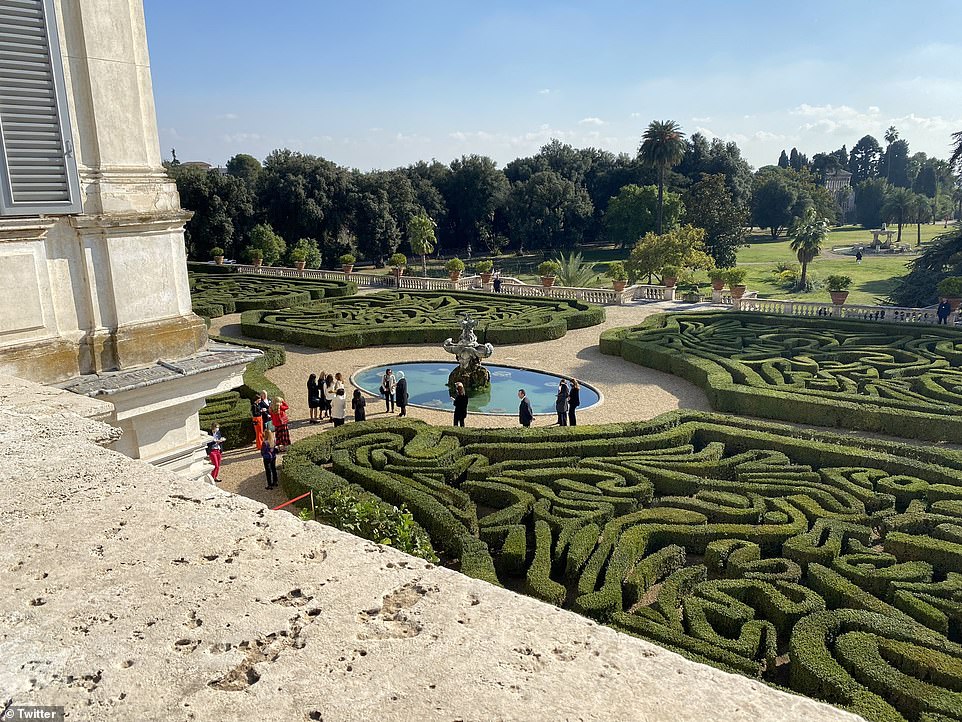 The G20 spouses walked around the grounds of Villa Doria Pamphilj on Saturday, where they took a group photo. 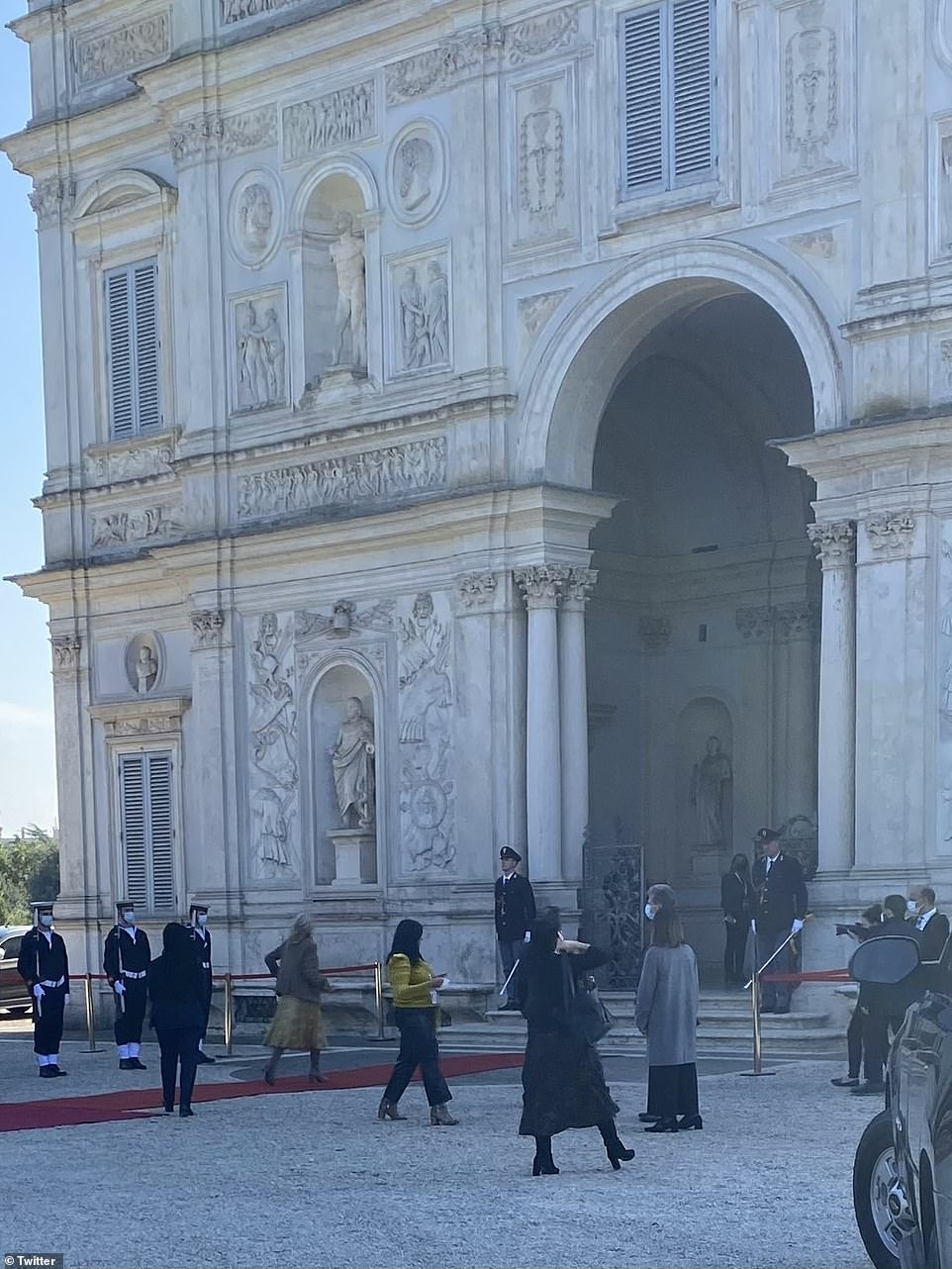 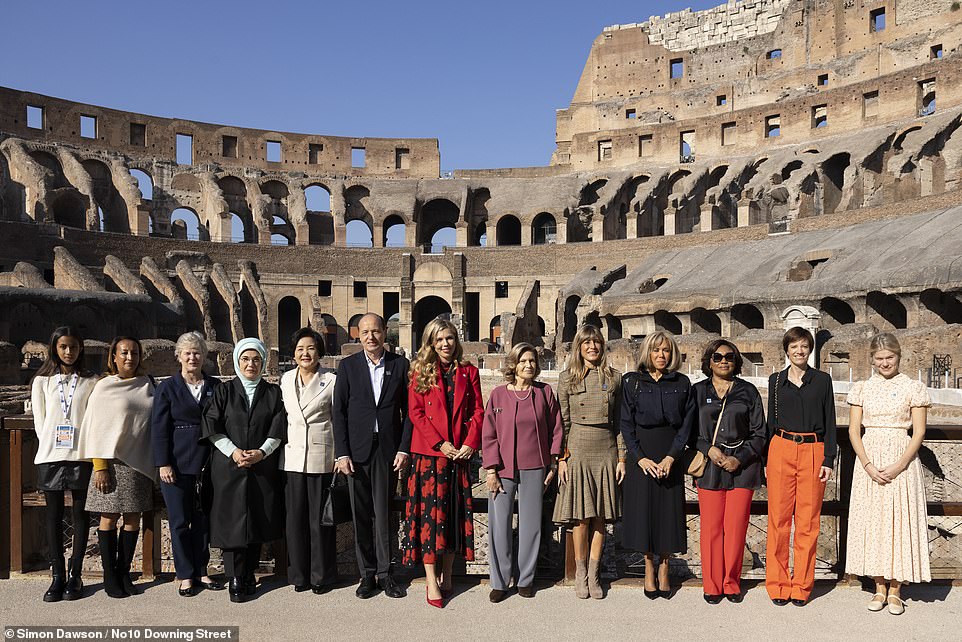 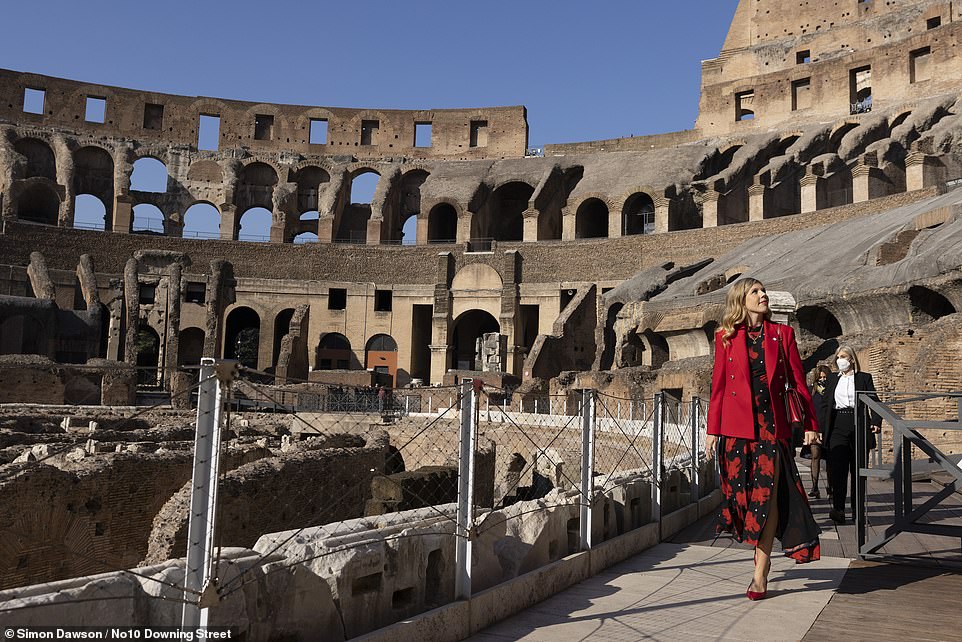 Carrie Johnson is photographed taking in the Colosseum in Rome on Saturday with other partners of G20 leaders. 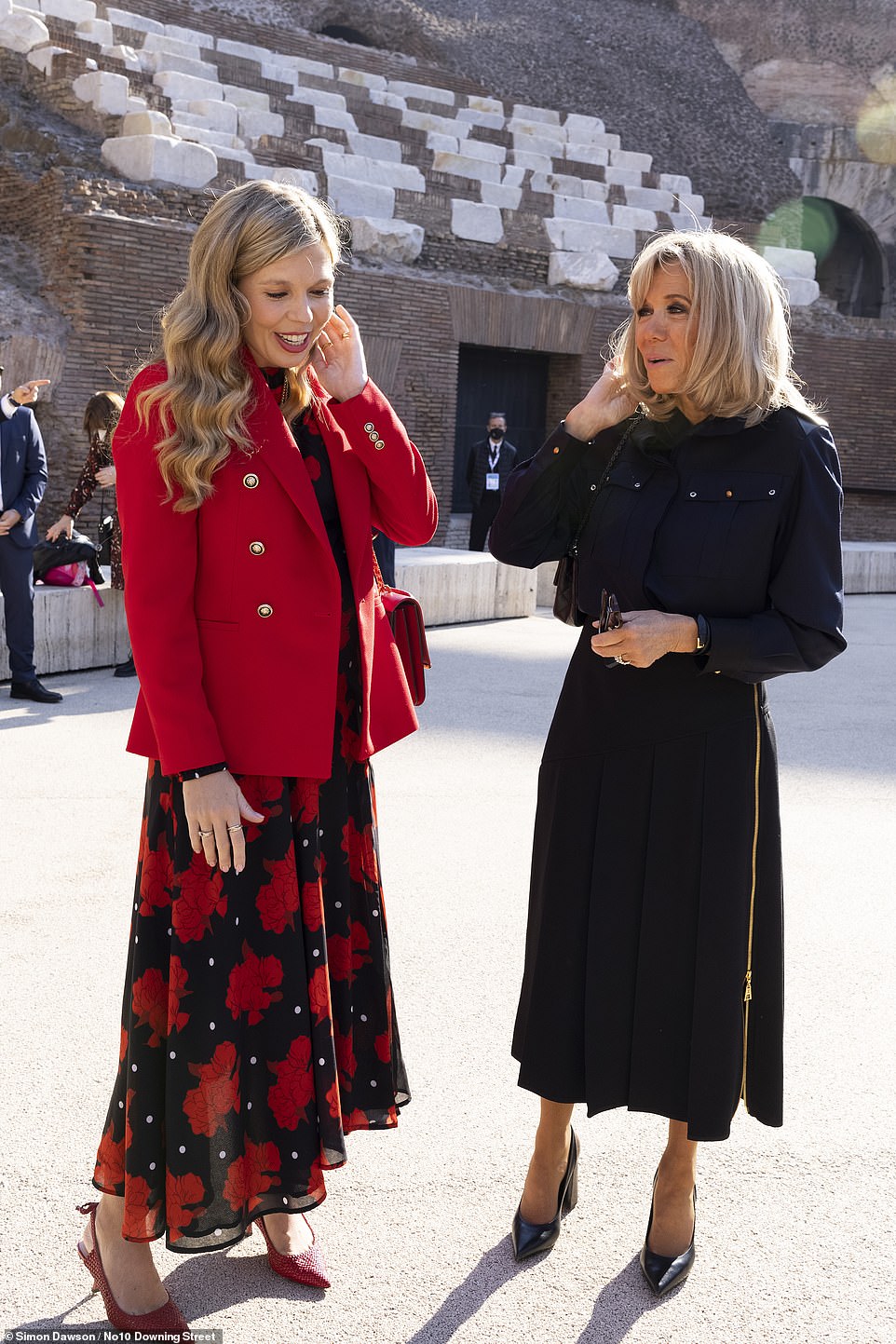 Carrie Johnson (left) and Brigitte Macron (right) speak at the Colosseum in Rome on Saturday. 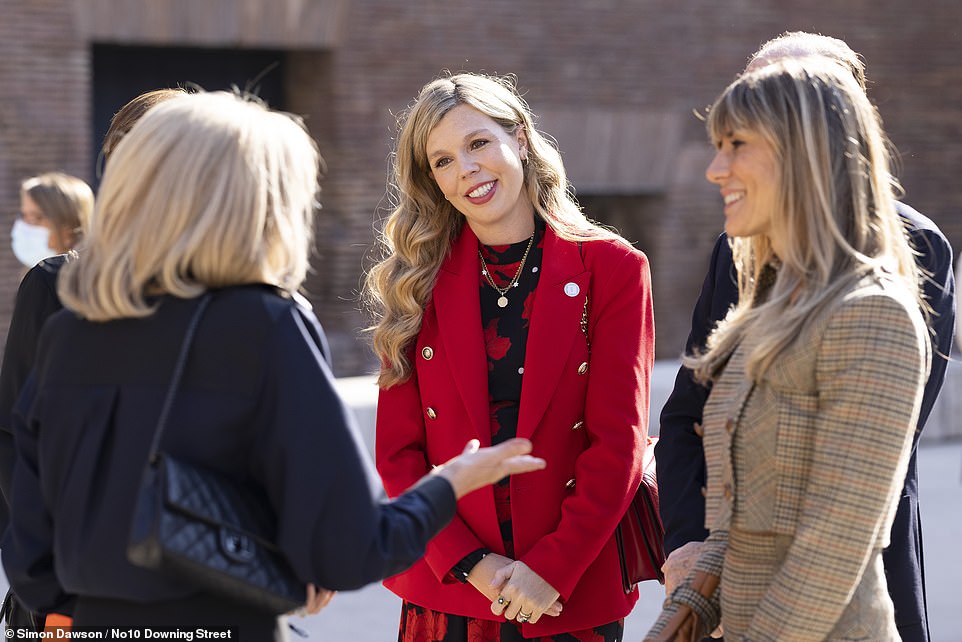 (From left) Brigitte Macron, Carrie Johnson and Italian prime minister’s wife Serenella Cappello at the Colosseum in Rome on Saturday. 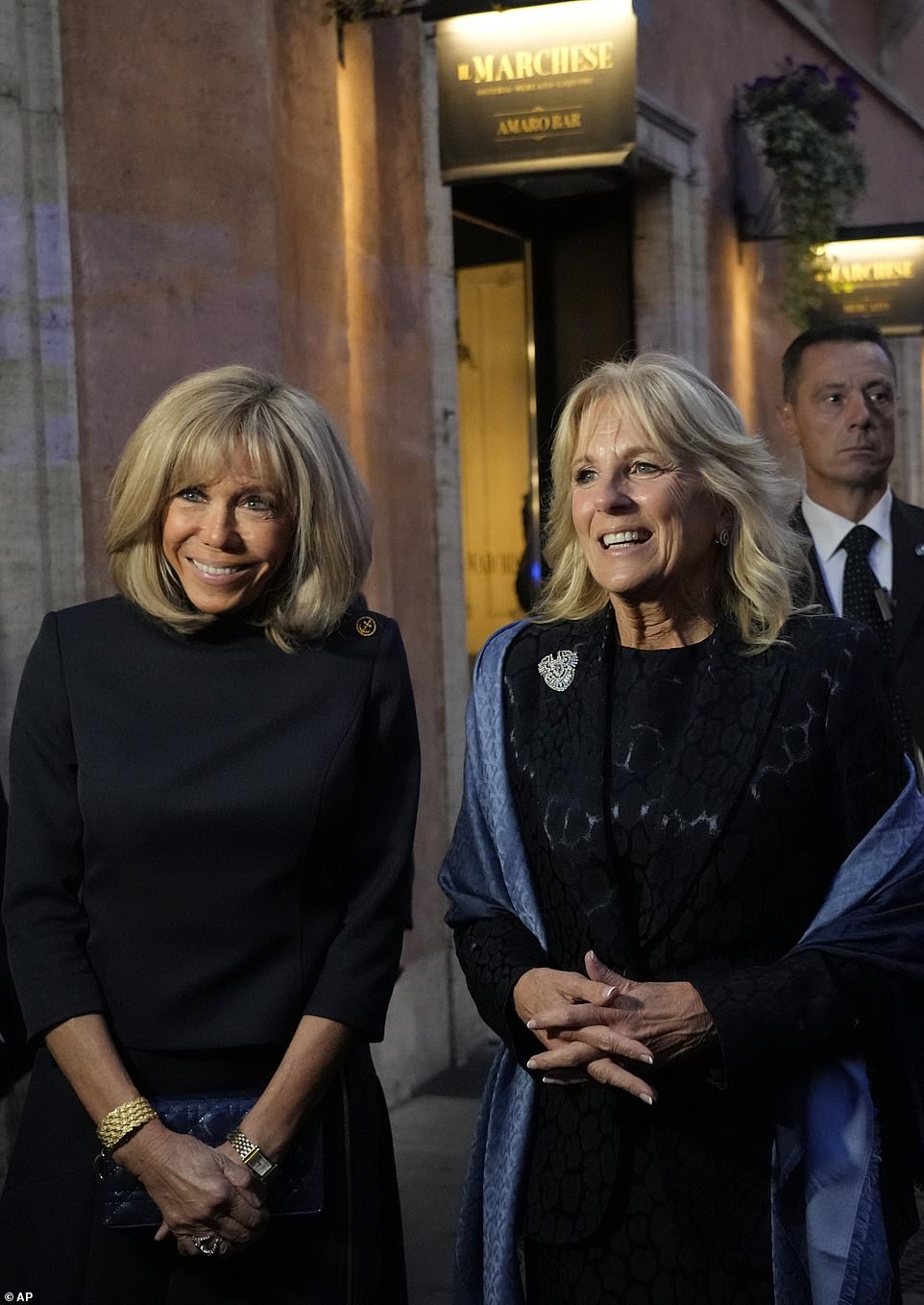 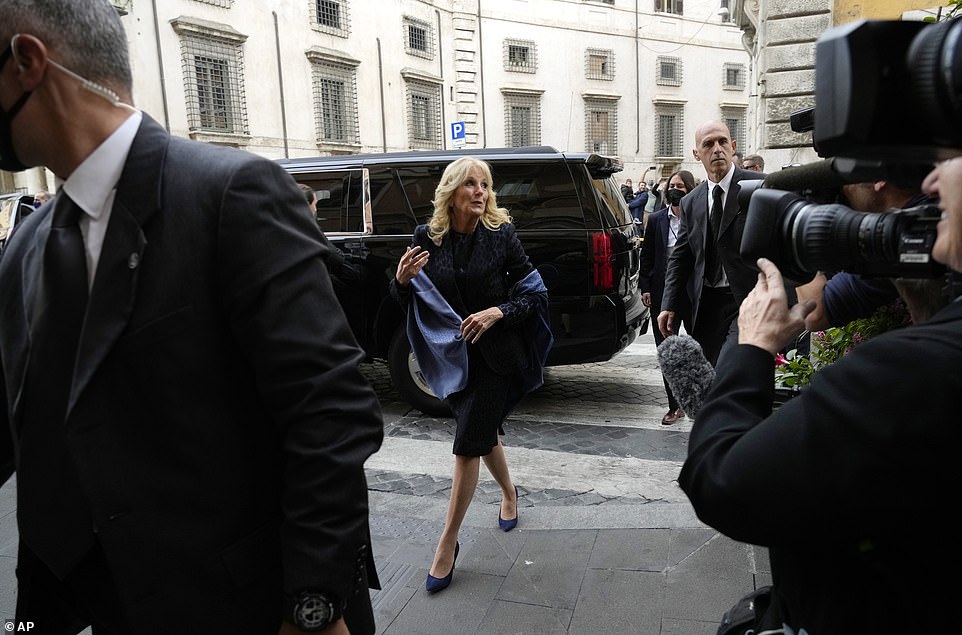 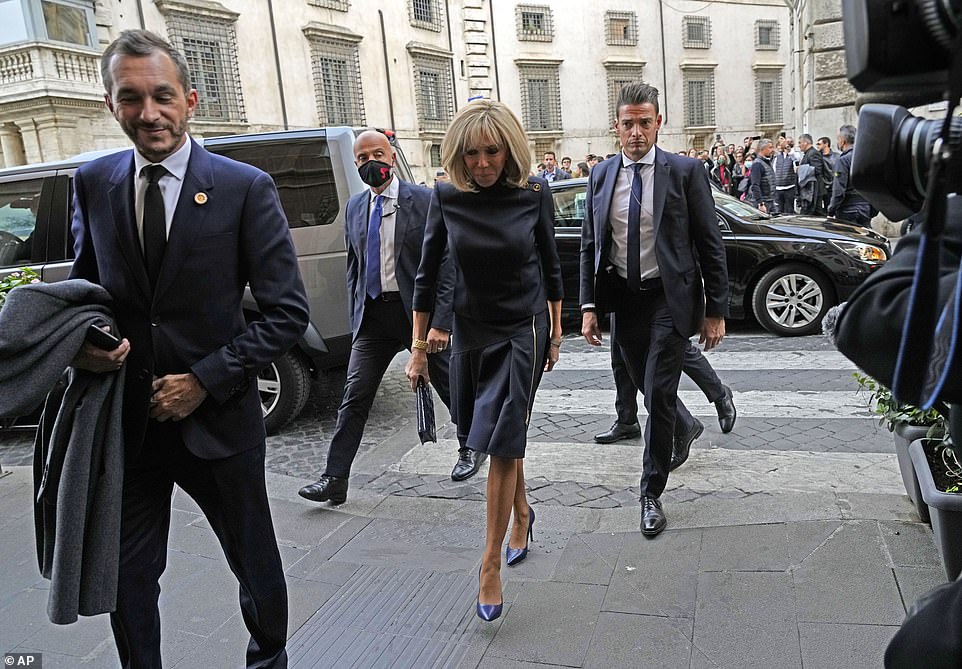 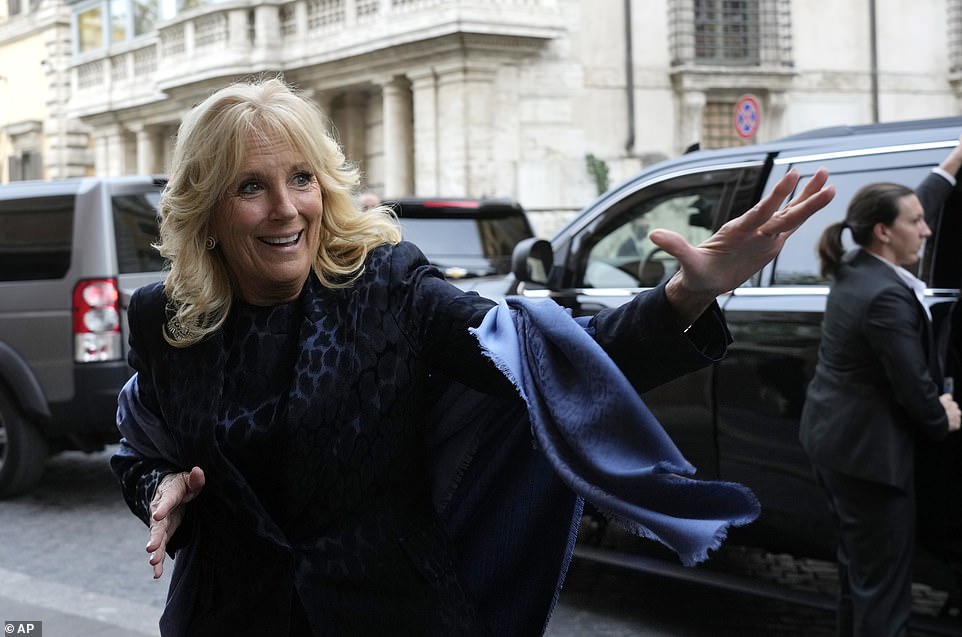 Biden waves at reporters staged outside Il Marchese, a restaurant located near the Tiber river in Rome 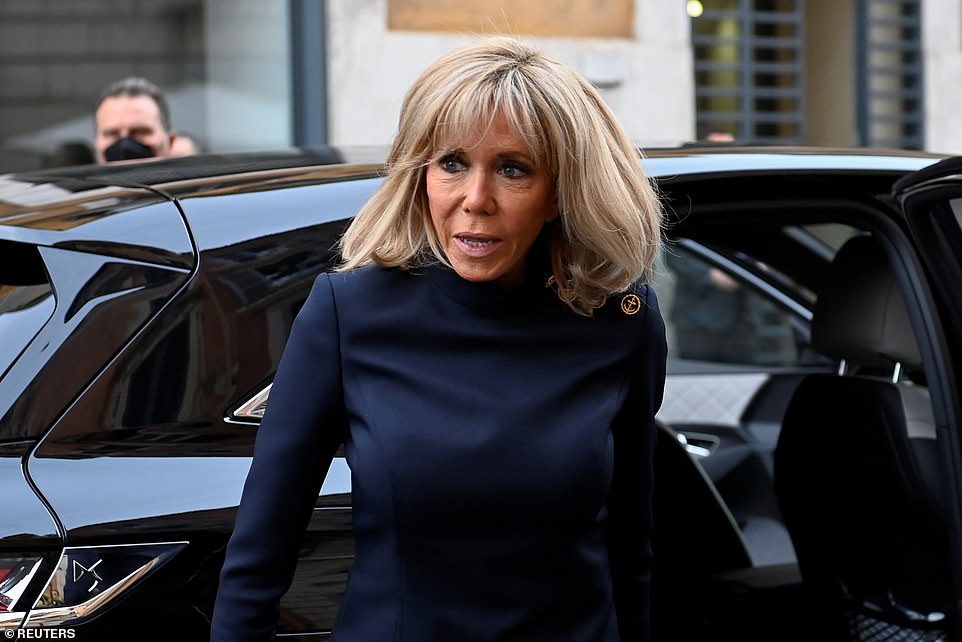 The French first lady arrived after Biden. She and the American first lady spent time together at spouses events in June at the G7. 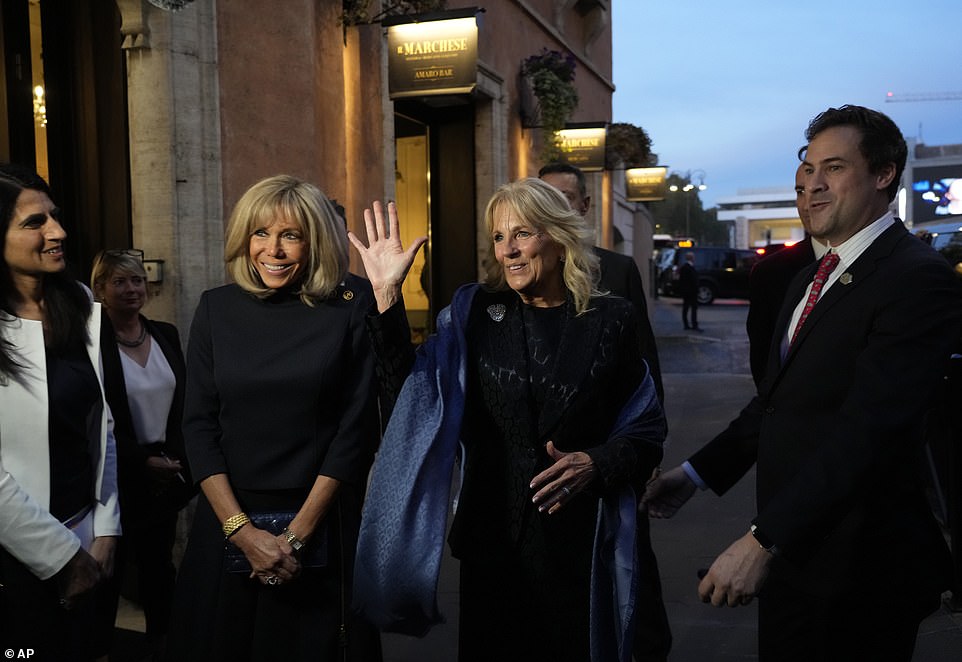 French First Lady Brigitte Macron (left) and First Lady Jill Biden (right) spoke with reporters after spending time together – while their husbands met – at a restaurant in Rome on the sidelines of the G20. 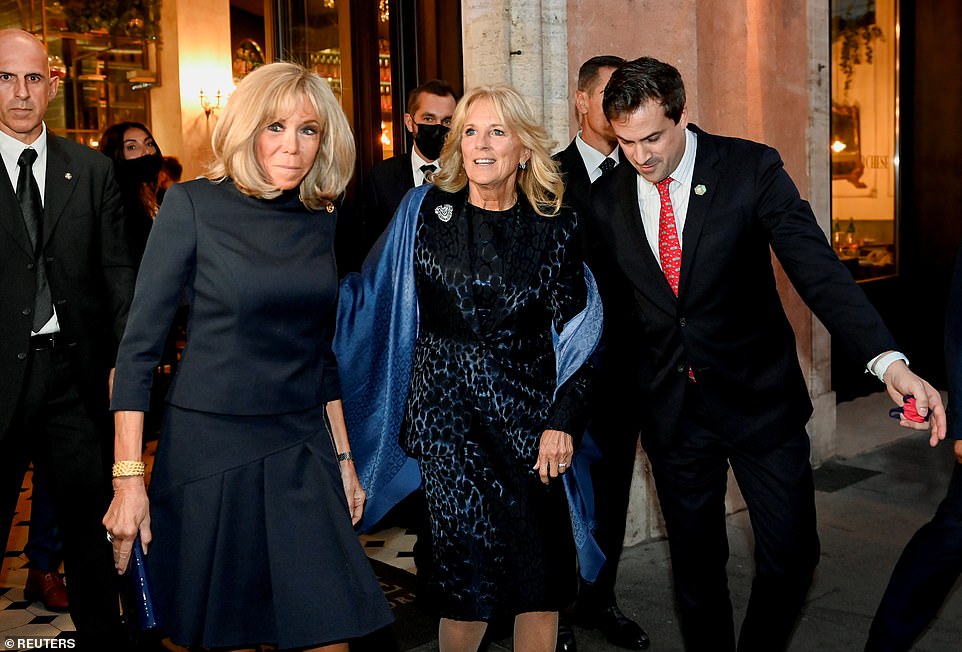 Jill Biden’s meeting with First Lady Macron is part of the first lady’s packed schedule over four days in Italy. 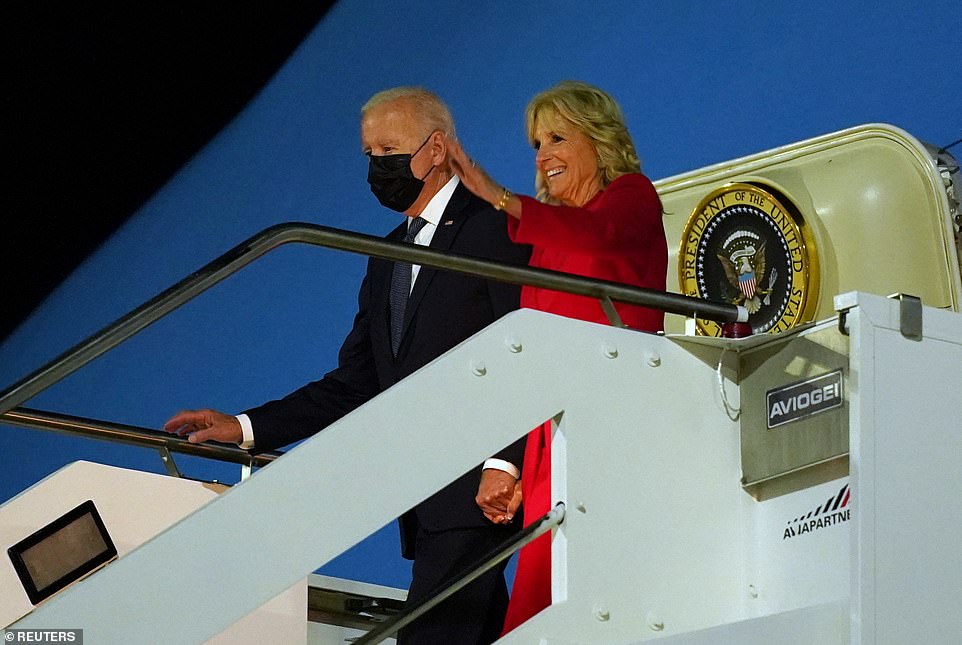 First Lady Jill Biden (right), arriving in Rome early Friday morning alongside President Joe Biden (right), has her own packed schedule while in Italy through Monday. 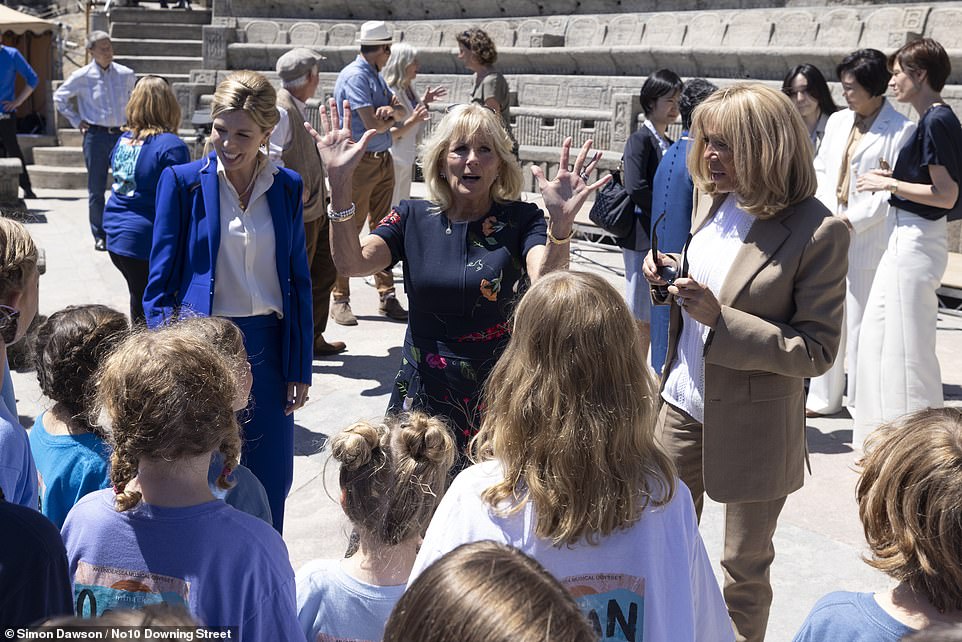 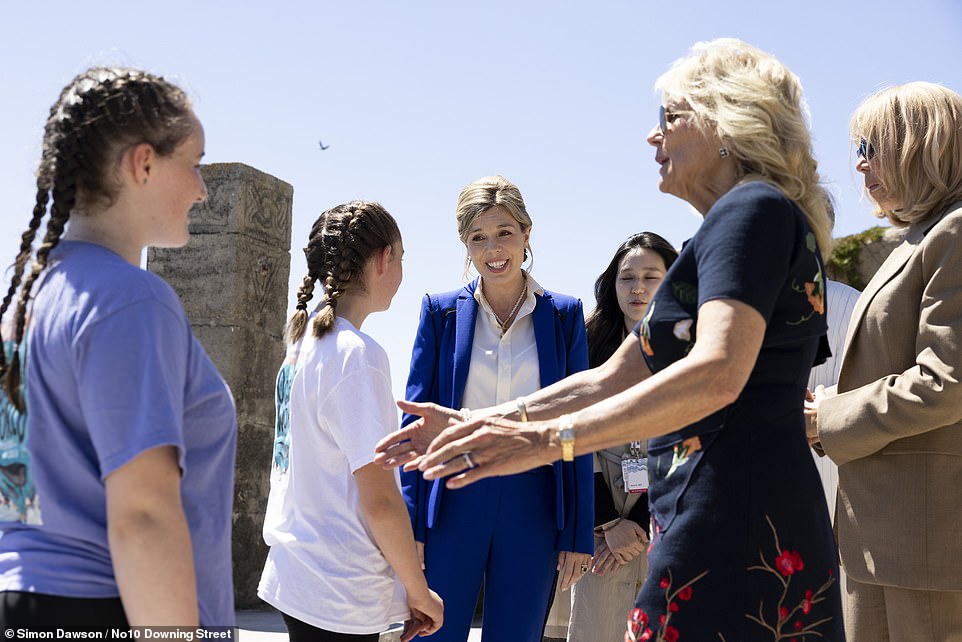 First Lady Jill Biden (second from right) and Brigitte Macron (right) stand side-by-side at a spouses event in June, which was part of the G7 in Cornwall. 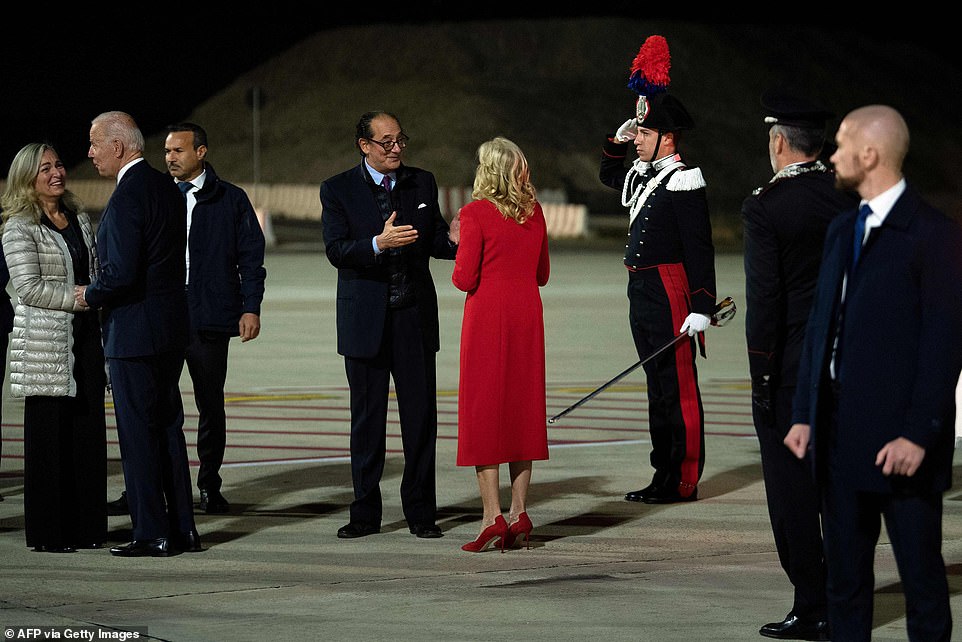 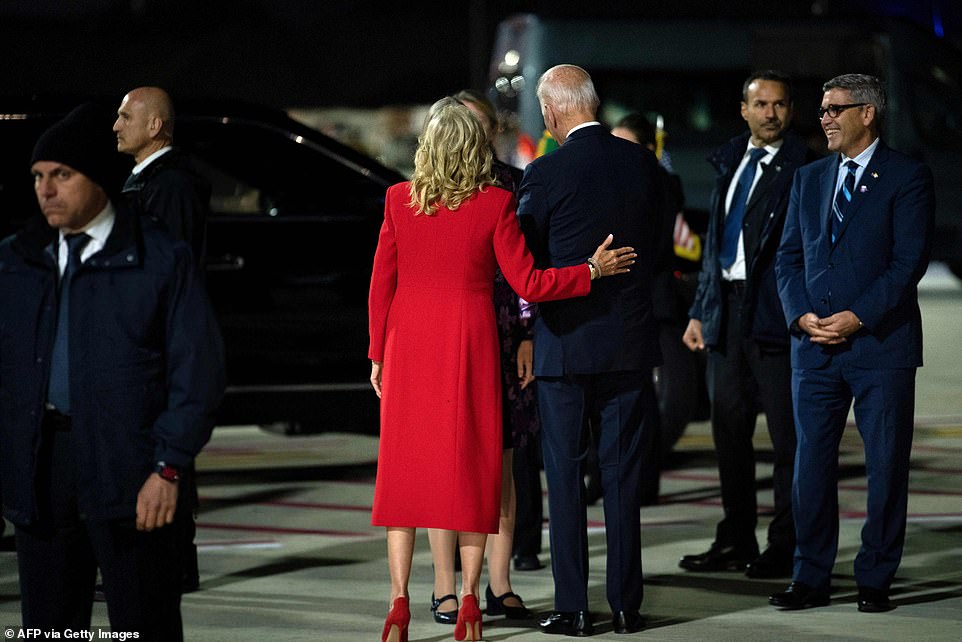 First Lady Jill Biden (left) ushers President Joe Biden (right) toward the Beast as they arrive in Rome, Italy to participate in G20 events through Sunday. 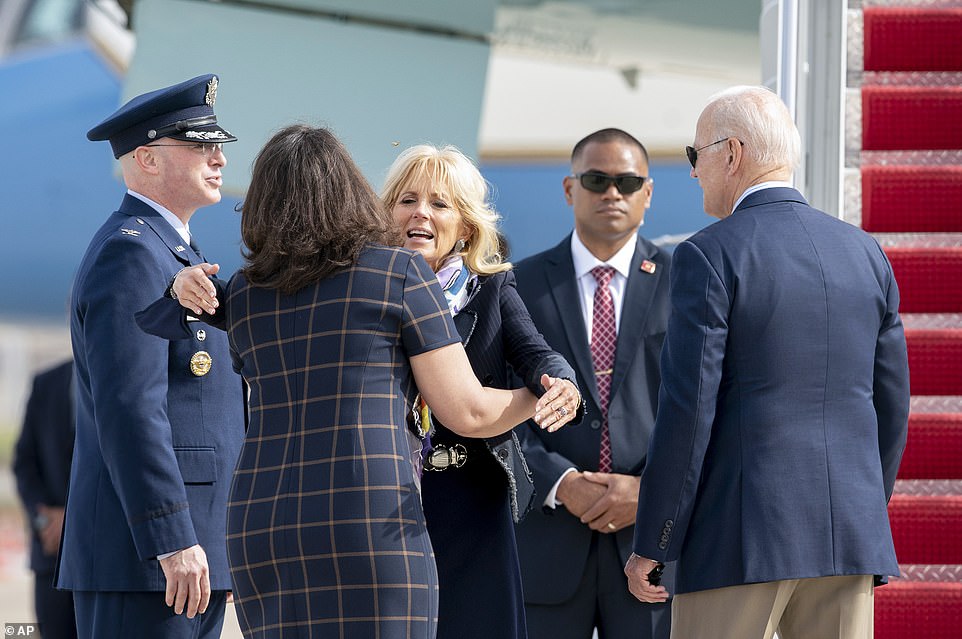 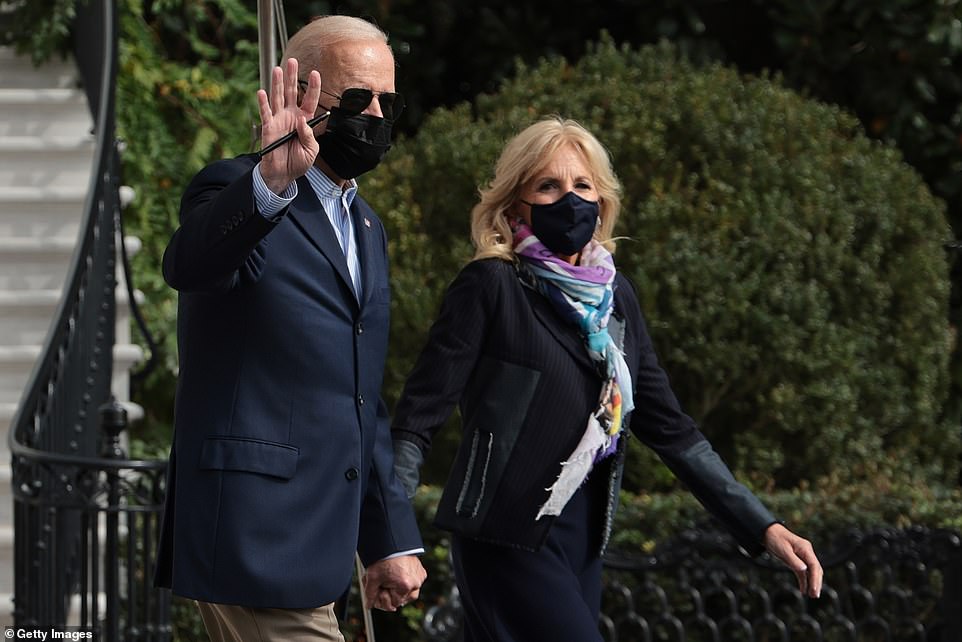 First Lady Jill Biden (right) and President Joe Biden left for Rome early Thursday afternoon. They will split up Monday with the president traveling to Scotland for COP26 and the first lady heading to Naples to visit a Defense Department-funded high school at a U.S. base.