Jilted boyfriend stabs girlfriend to death in a shop

A jilted man stabbed his girlfriend to death in a shop after she rejected his marriage proposal.

The killer then turned the knife on himself in a failed bid to commit suicide.

Shocking images show the man writhing in agony while covered in blood on the floor as shoppers and the woman’s distraught mother denounce him for his brutal act.

He then begged onlookers: ‘Finish me off.’

The 23-year-old woman’s body can seen under a freezer in the grocery store. Witnesses said she had been stabbed 17 times.

The man, 26, had followed her into the shop in the oil-rich Russian city of Ufa, in Bashkortostan region.

Earlier he had waited for her near her house and she had tried to flee from him, according to neighbours.

Reports say her parents had been against a marriage between the pair because he had a criminal record.

He had approached her outside the shop with a bunch of flowers and asked her to marry him, but she refused, and said she wanted to end their relationship, according to reports.

She then ran into the store shouting ‘Help!’

He followed screaming: ‘If I can’t have you, no-one else will’ before taking out a knife and stabbing her multiple times.

He then plunged the knife into his own chest.

‘A man stabbed his girlfriend out of jealousy, because she refused to continue the relations with him,’ said a statement from the Russian Investigative Committee, which deals with serious crime. 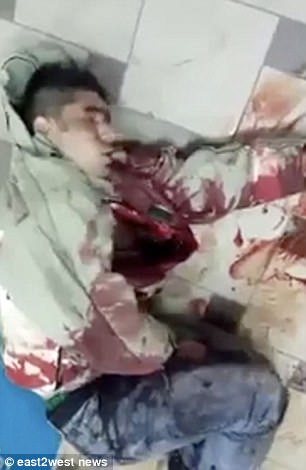 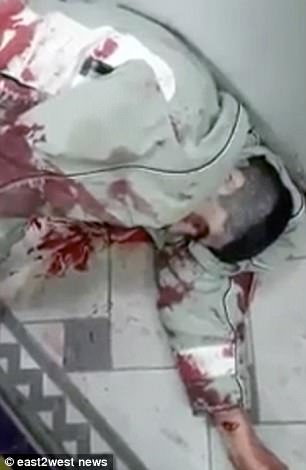 ‘The suspect is in hospital in a grave condition.’ A murder case has been opened.

A saleswoman at the shop said: ‘We are still in shock. What happened here was a nightmare. It was terrible, he began to knife her. And then stab himself. A policeman said she died on the spot.’

In shocking video footage a man holding a camera can be heard saying: ‘He just entered the shop. This scum was going to flee, I held him. Scum, Looks like he stabbed himself too?’

He then asks the killer: ‘Did you do anything to yourself? Or not? Did you stab yourself? Asshole.’

A woman – believed to be the dead woman’s mother – is heard saying: ‘He’s a convict.’

She then says: ‘He wanted my daughter to marry him. And she did not want so he stabbed her. Asshole!’

The man with the camera replies: ‘He is a ****** a convict would never do this’ before the woman says: ‘Check him. There is something in his hand. He stabbed himself.’

The pair then discuss if the bloody man has a knife before the man filming says: ‘I don’t know, bro, I just dragged him out of there. When he began to twitch around her… I don’t know what happened.’ 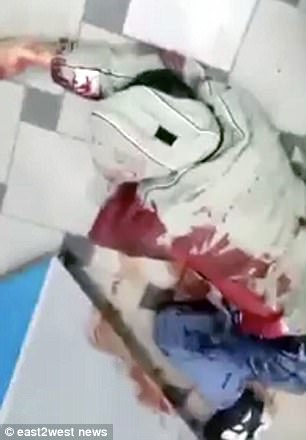 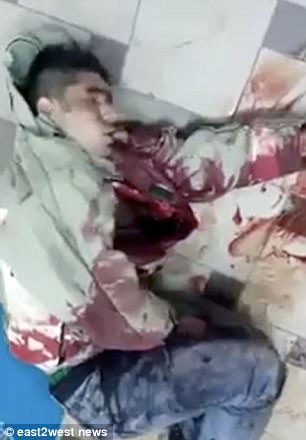 The man (pictured) had followed her into the shop in the oil-rich Russian city of Ufa, in Bashkortostan region before launching his attack