Jimm Kimmel plea to lawmakers with NRA money do something

Jimmy Kimmel opened up his episode Thursday night forcefully urging the president and Republican lawmakers to ‘Do something’ following Florida school shooting that left 17 people murdered.

During his impassioned monologue the late night host said: ‘Do something. Now. Not later. Now,’ after 14 students and three faculty members were barraged by bullets by gunman Nikolas Cruz, 19, at Marjory Stoneman Douglas High School in Parkland.

Kimmel, whose voice was cracking introduced a clip of Donald Trump’s remarks and told the president to ‘tell Paul Ryan, Mitch McConnell, Marco Rubio – all the family men who care so much about their communities – that what we need – are laws. Real laws – that do everything possible to keep assault rifles – out of the hands of people who are going to shoot our kids. Go on TV – and tell them to do that.

‘Tell these Congressmen – and lobbyists – who infest that swamp you said you were going to drain,’ Kimmel added with clear sarcasm at the word ‘swamp,’ to ‘force these allegedly-Christian men – and women – who stuff their pockets with money from the NRA year after year after year – to do something. Now. Not later. Now.’

‘Do something. We still haven’t talked about it. You still haven’t done anything about this. Nothing. You’ve literally done nothing. Actually – you’ve done worse than nothing’ late night host Jimmy Kimmel urged 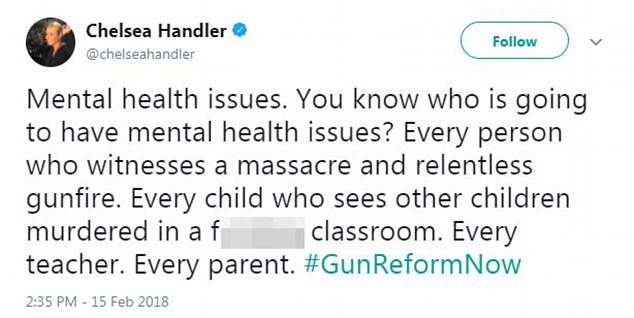 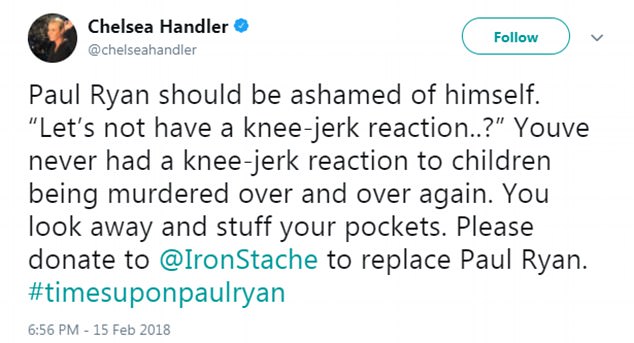 ‘Don’t you dare let anyone say ”it’s too soon to be talking about it.” Because you guys said that after Las Vegas. You said it after Sandy Hook. You say that after every one of these eight now fatal school shootings we’ve had in the United States this year.’

‘Children are being murdered,’ he continued, his voice cracking again, and the audience cheered him on to keep going.

‘Do something. We still haven’t talked about it. You still haven’t done anything about this. Nothing. You’ve literally done nothing. Actually – you’ve done worse than nothing.’

Kimmel ended the monologue by urging viewers to ‘vote them out of office’ if    nothing changes. 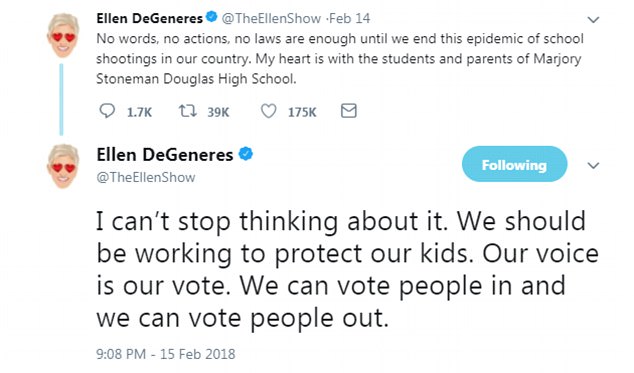 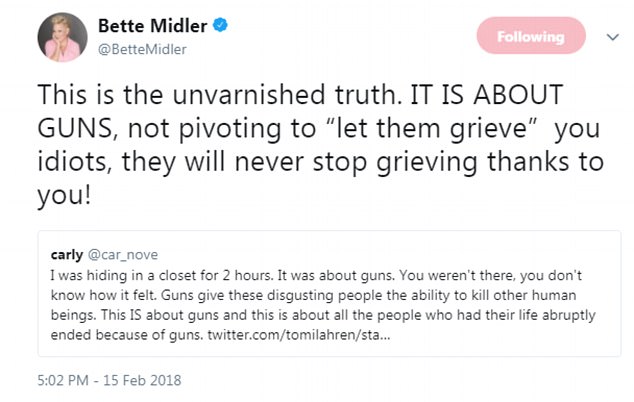 The late night host’s anger capped off another day of people in the spotlight urging lawmakers to do something about gun control.

Handler sent out several missives through the day, but specifically targeted what has been called an issue of ‘mental health’ in light of Cruz’s atrocious shooting spree with an AR-15 rifle.

Ellen DeGeneres echoed similar sentiments to Kimmel, saying people can let their voices be heard by voting people out for inaction.

Kim Kardashian was just one of the celebrities NOT sending thoughts and prayers to Florida on Wednesday.

The 37-year-old took to Twitter to instead demand action from the government, after yet another American gun massacre left at least 17 dead Marjory Stoneman Douglas High School in Parkland.

‘We owe it to our children and our teachers to keep them safe while at school,’ she tweeted. ‘Prayers won’t do this: action will. Congress, please do your job and protect Americans from senseless gun violence.’ 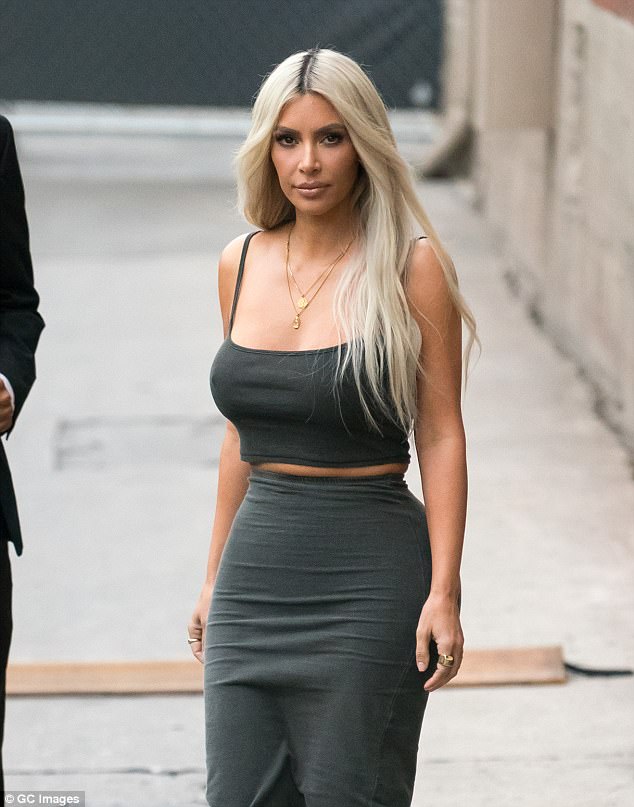 No point: Kim Kardashian was just one of the celebrities NOT sending thoughts and prayers to Florida on Wednesday

Do your job: The 37-year-old took to Twitter to instead demand action from the government, after yet another American gun massacre left at least 17 dead Marjory Stoneman Douglas High School in Parkland

The reality star retweeted a number of stats that continuously show up in the wake of these tragedies, such as how many were carried our with the infamous AR-15 assault rifle; or how every air passenger must take off the shoes because if one shoe-bombing attempt, yet after 1606 mass shootings gun law remains the same.

She also retweeted a screenshot of an NRA tweet encouraging people to buy guns for their loved ones on Valentine’s Day, which was deleted shortly after the murder spree.

Mark Ruffalo agreed: ‘Prayers without accordant action are silent lies told to oneself, heard by no God, amounting to nothing. Action is the language of truth, the prayers of the Saints.’ 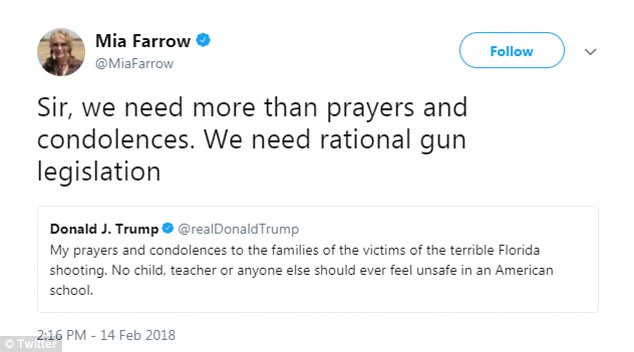 Chelsea Handler called on Americans to elect candidates who are not funded by the NRA in the November elections.

‘We have an opportunity to elect candidates who won’t allow kids to go to school and get shot. It is disgusting how many times this has happened and Republicans do nothing,’ she tweeted. ‘You all have blood on your hands.’ 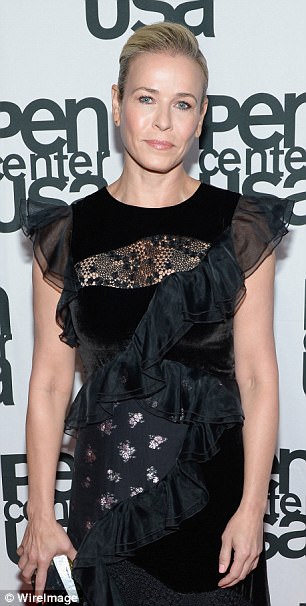 Vote them out: Chelsea Handler called on Americans to elect candidates who are not funded by the NRA in the November elections, while Piers Morgan asked the President what he was going to do about it 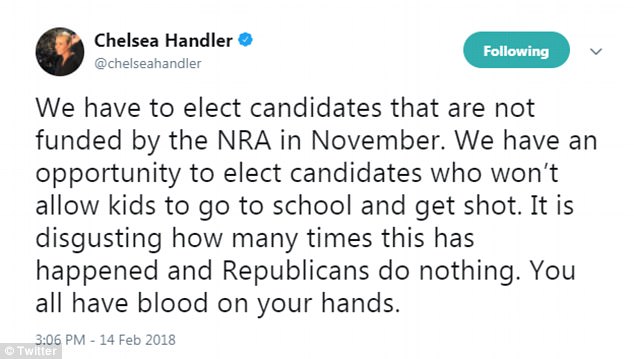 ‘Sir, we need more than prayers and condolences,’ she wrote. ‘We need rational gun legislation.’

DailyMail’s Editor-At-Large Piers Morgan instead posed him a question: ‘Three of the 10 worst mass shootings in American history have happened in your 1st year, Mr President @realDonaldTrump. What are you going to do about it?’

Stephen King predicted ‘Blabbermouth Don’ would send prayers, but there would be ‘no call of any sort’ for sane gun regulations.

Patricia Arquette insisted if drug dealers can be blamed for the drug problem, then the NRA is culpable for mass shootings. 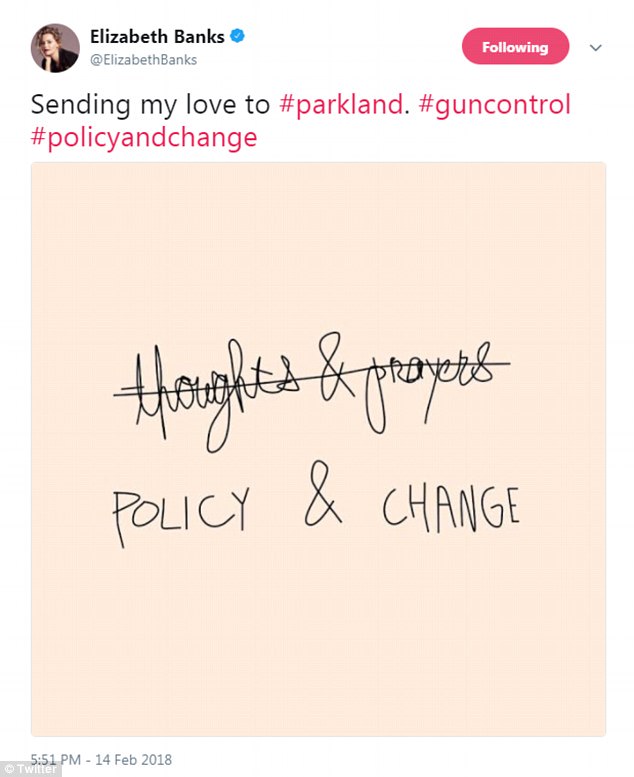 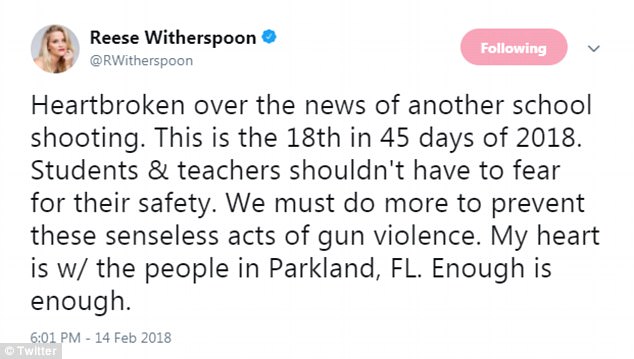 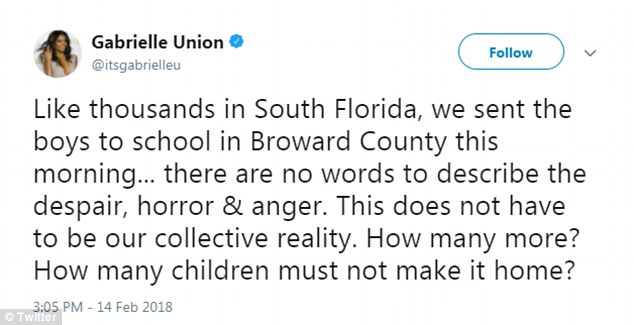