Former President Jimmy Carter prefers a simple life compared to the opulence of his successors and has been spotted flying commercial.

In a recent interview Carter revealed the humbleness of his post-presidency, retiring to his small 700-strong Georgia hometown and to his two-bedroom ranch home.

As the former president’s simple digs capture the heart of Americans across the nation, viral video of Carter flying commercial and greeting passengers has re-emerged.

The 39th president went viral after he boarded a Delta flight from Atlanta to Los Angeles on June 8 last summer and instead of holing up in first class, the 93-year-old headed down the aisle to shake hands with passengers and smile for selfies. 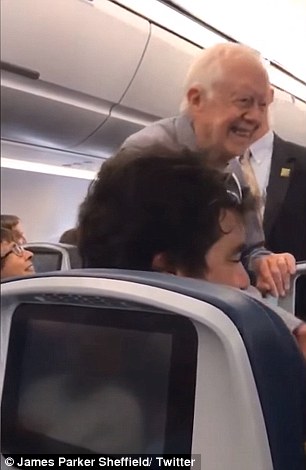 He’s just like us! Jimmy Carter, 93, says he only flies commercial in his humble post-presidency 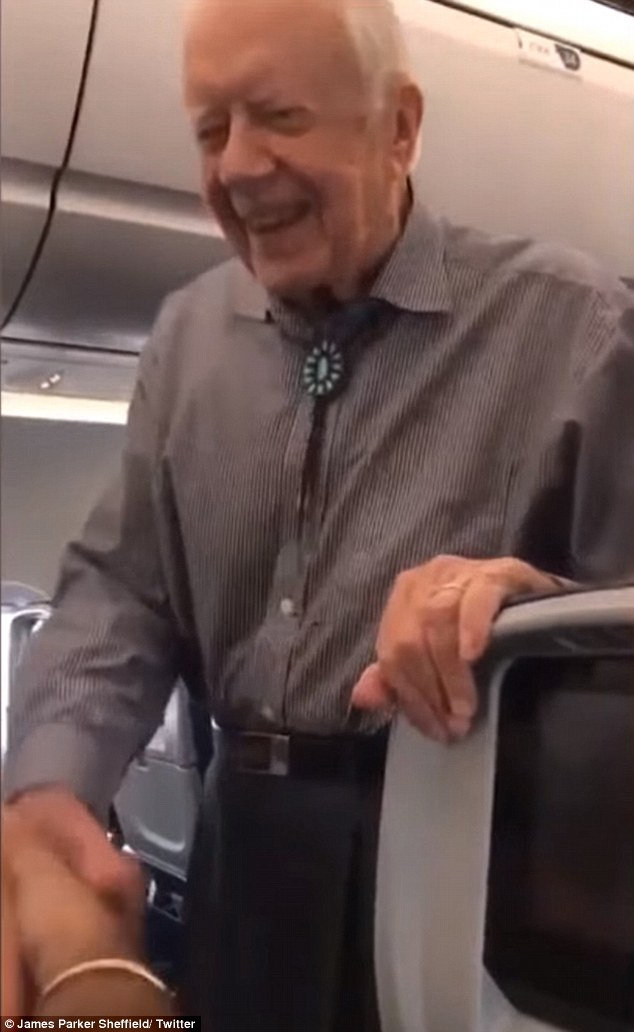 After boarding a flight from Atlanta to Los Angeles on June 8, the 93-year-old walked down the aisle greeting passengers by shaking hands and smiling for pictures

Heart-melting footage displays the president walking down the aisle enthusiastically greeting passengers as fans say ‘You’re my favorite president!’ and ‘I love you Jimmy Carter’.

The Georgia native says flying commercial is his only mode of transport – a stark contrast from the private jet lifestyle of modern presidents including Trump – and it’s just one of the many ways he leads a simple life following his presidency from 1977 to 1981.

According to the Washington Post, Carter is dubbed the ‘un-celebrity president’ who instead of cashing in on political riches post-presidency, returned to his small Georgia hometown of Plains and to his two-bedroom ranch home valued at $167,000.

In fact, Carter costs US taxpayers the least money of any former US President according to the General Services Administration.

The total bill for him in the current fiscal year was $456,000, covering pensions, an office, security staff and other expenses.

That’s nearly a quarter of what Barack Obama, Bill Clinton and George W. Bush cost – as they’ve all racked up bills of more than $1million last year.

‘I don’t see anything wrong with it; I don’t blame other people for doing it,’ Carter told a reporter after inviting them into his home earlier this month. ‘It just never had been my ambition to be rich.’ 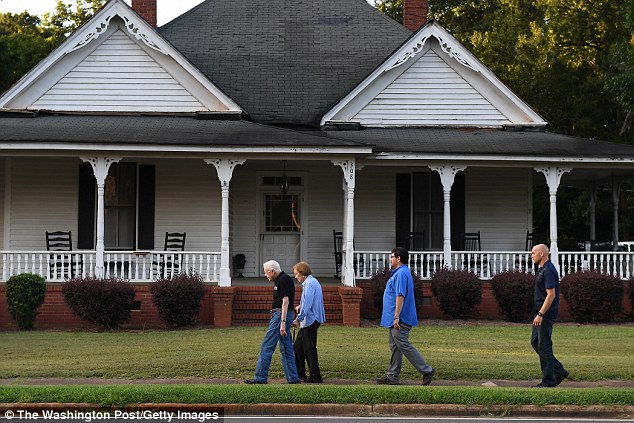 Following his presidency Jimmy Carter returned to his hometown of Plains, Georgia to his old two-bedroom ranch home, pictured walking with his wife Rosalynn Carter and Secret Service in front of their beloved cottage Home sweet home: Returning to Plains at 56, Carter came back to a peanut business that was $1million in debt and was forced to sell it. He turned to writing books for revenue instead 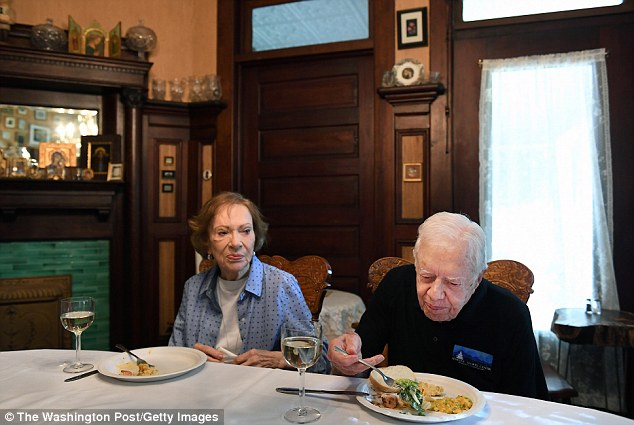 Dinner time: Carter sits next to his wife, former First Lady, Rosalynn Carter as they tuck into a meal

Instead of making money from corporate speaking and joining the boards of big companies as his predecessor Gerald Ford had, Carter returned to the town where he was born and started his career as a peanut farmer.

When the Democrat returned home his finances were in tatters as his peanut business was $1million in debt.

He was forced to sell it and took to the pen to repair his finances – writing 33 books on a variety of subjects, although not as successfully as modern Presidents.

On top of his writing revenue, the 39th President of the United States also commands a $210,700 annual pension which all former presidents receive.

But despite his sizeable income, Carter said he was determined to live a modest life in the south Georgia township.

He is the only president in the modern era to return full-time to the house he lived in before he entered politics, a modest two-bedroom cottage assessed at $167,000. 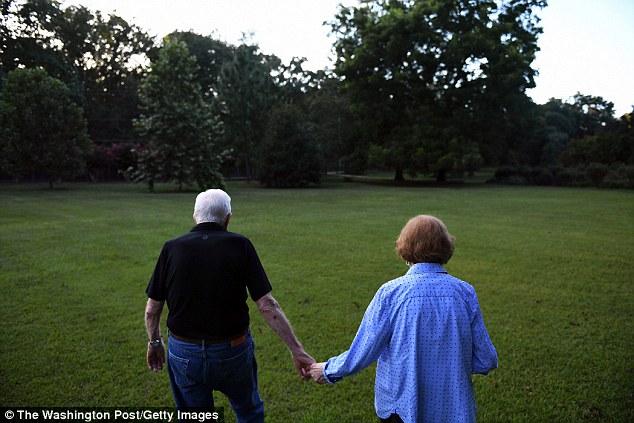 Carter costs US taxpayers the least of any former US President according to the General Services Administration. He is seen with his wife at the home earlier this month 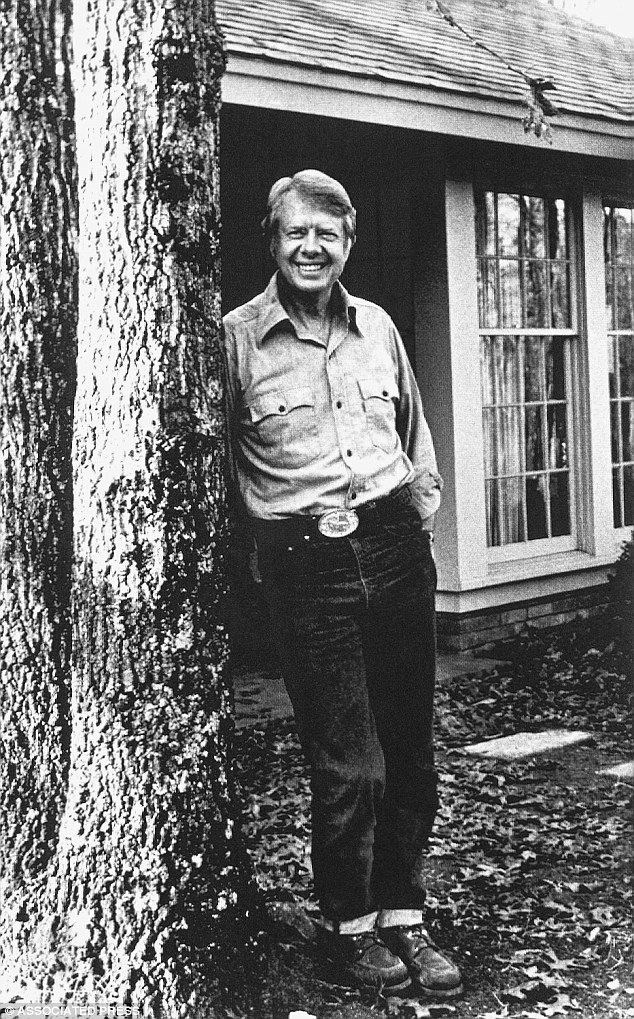 Throwback: In this February 8, 1976 file photo, Carter relaxes in blue jeans outside his home in Plains, Georgia 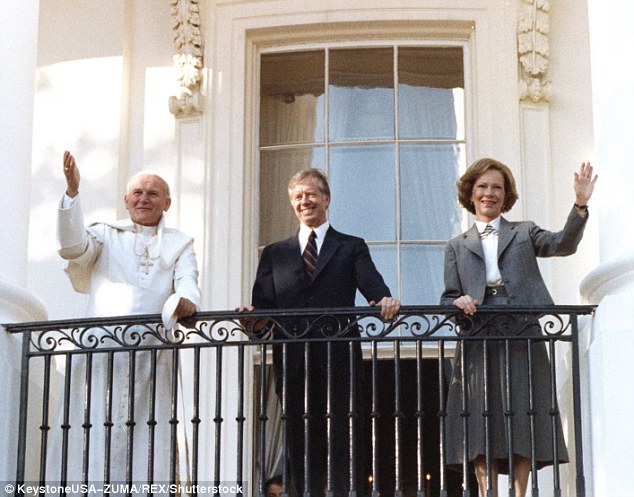 Carter survived a health scare in 2015 after being diagnosed with melanoma on his liver and brain.

But now, after radiation and chemotherapy, Carter says he is cancer-free.

He says he takes great pride in ‘staying active’ and doing the dishes after every meal.

And in addition to his humble home-life, Carter still finds time to teach Sunday school at the Maranatha Baptist Church on the edge of town every fortnight.

According to locals there are queues around the block sometimes even starting the night before.

‘We feel at home here,’ Carter says. ‘And the folks in town, when we need it, they take care of us.’

Asked whether he believes any future ex-President will live as simply as he does, Carter replied: ‘I hope so. But I don’t know.’