Jimmy Kimmel led the way on his ABC show, joking that the video of a stepmother walking in on her stepson and another girl having sex was to Cruz’s liking because he is a ‘family values guy.’

He went on to say that he did not think Cruz would have actually been watching the adult video, stating: ‘I think he masturbates to poor people without healthcare.’

Kimmel later aired a parody ad he claimed was from a Cruz PAC that showed the politician’s face and asked viewers: ‘Is this the face of a man who masturbates?’

The ad then kept pausing to replace the selected photos, which showed Cruz’s eerie smile or contorted face.

It ended with a voice-over that stated: ‘Ted Cruz never masturbates. For America.’ 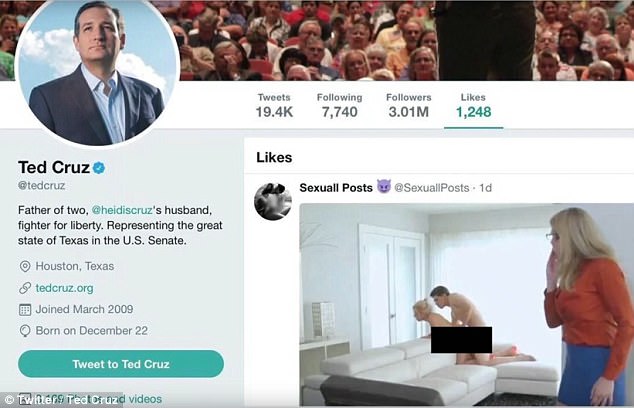 Cruzing: Kimmel said Cruz liked the video because he is a ‘family values guy’ then said the Texas senator ‘masturbates to poor people without healthcare’

‘If he had done something this perverted during the campaign, he might be president right now,’ joked the Jimmy Kimmel Live host at the top of his monologue.

‘This is especially funny because he is the one who had a law banning sex toys. So he is a lot of fun.’

Kimmel then noted that the post was up for hours before a member of Cruz’s team noticed it and thought to take it down.

‘According to the spokeswoman, the tweet has been removed he is and being punished for being a very naughty boy,’ said Kimmel.

‘But I have to say, I love this stuff. Let’s go through the possibilities of how the could have happened. I have four theories. 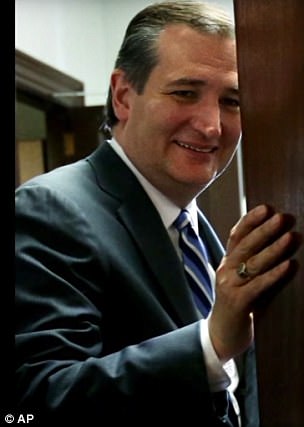 Face the facts: The ABC host then aired a parody ad that denied Cruz masturbates by showing photos of the politician with an eerie smile and contorted face (above) 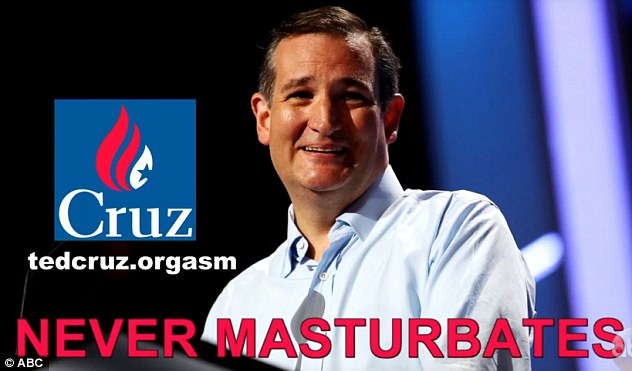 Repeal and replace: ‘Do you know what? Let’s go ahead and use another picture,’ said the voice-over as the photos was quickly replaced on the screen (Kimmel parody grab above)

The parody ad was then aired for the audience, which had the look and feel of the ones which millions of Americans watched during the campaign.

A photo was then put up of Cruz with a tight smirk on his face staring down at a camera.

‘Do you know what? Let’s go ahead and use another picture,’ said the voice-over as the photos was quickly replaced on the screen.

‘Is this the face of a man who masturbates … wait, wait, hang on. Get the other.’

Then in quick succession three more photos went up and were quickly replaced in the ad. 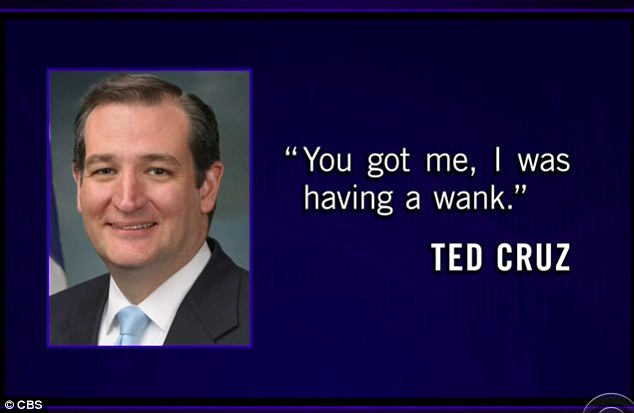 Don’t ask, don’t tell: ‘When asked to comment on this story, Ted Cruz said, ‘Don’t come in here!'” joked James Corden, who later flashed a fake comment from Cruz (above) 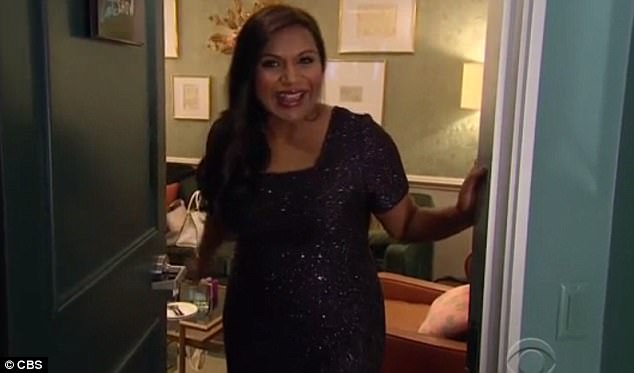 Beat it: ‘He’s ignoring me because he’s on his laptop,’ joked Mindy Kaling, who claimed Cruz was in her dressing room when she stopped by Corden’s show

James Corden also made Cruz the focus of his opening monolgue on his CBS show, devoting his entire first segment to the scandal.

‘Good evening ladies and gentlemen, welcome to the show. I’m very excited about tonight’s show.  But, apparently, I’m not the only one who’s excited. Texas senator Ted Cruz is coming under fire because, late last night, his official Twitter account liked a pornographic video,’ the Late Late Show With James Corden host told the audience.

‘So, if you ever meet Ted Cruz on the campaign trail, you might want to think twice before shaking that hand.’

He then added: ‘Ted Cruz likes pornography. Sounds like Kim Jong-un isn’t the only one who likes to shoot off his Cruz missile.’

Corden, like Kimmel, then joked about Cruz’s physical appearance in photographs.

‘When asked to comment on this story, Ted Cruz said, ‘Don’t come in here!”

Corden then pointed out Cruz had denied that he was the individual who had liked the tweet in question before stating that he believed it was ‘obvious’ that Cruz was responsible, and show have released a statement saying: ‘You got me. I was having a wank.’

The British-born funnyman added: ‘His approval rating would go up 50 points.’ 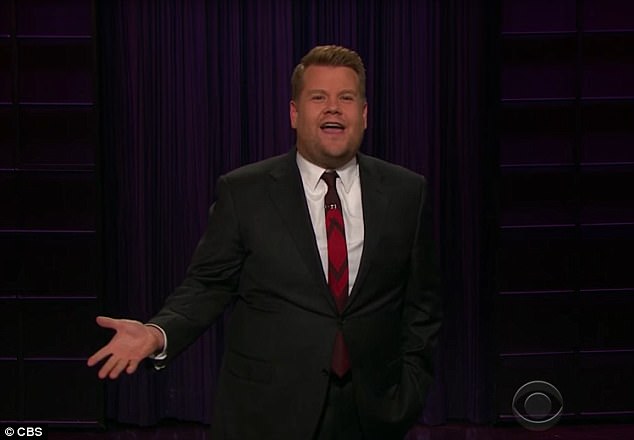 Cruz even found his way into Corden’s next segment about the new iPhone.

Next he said: ‘Apple revealed this new phone has all kinds of great new features such as increased battery life, an edge-to-edge screen and wireless charging.

‘Then Ted Cruz was like, ‘Yeah, but is it moisture-proof?”

Speaking about the developments in the new Apple Watch Corden said: ‘It now has a feature that will let you know when your heart rate is elevated, but you don’t appear to be exercising. It’s called ‘Ted Cruz mode.”

The show then went to commercial but came back with a check on Mindy Kalling in her dressing room, and another Cruz bit.

‘Who’s hanging out in there with you?’ asked Corden

‘I’ve got Ted Cruz in here on Twitter, hang on, replied Kaling.

‘Is he in the bathroom now?’ inquired Corden.

‘He’s ignoring me because he’s on his laptop,’ she replied. 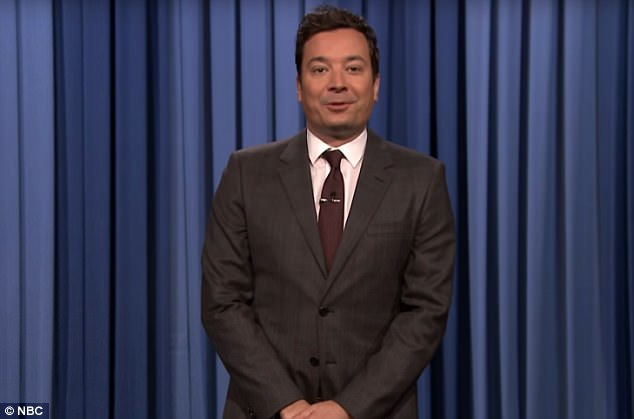 Just beat it: ‘Some are wondering if he’s going to hire a PR team to beat the scandal, but Cruz says he plans to beat it alone,’ said Jimmy Fallon (above)

Over on NBC, both Set Meyers and Jimmy Fallon kept their bit relatively brief.

‘Senator Ted Cruz’s Twitter account last night liked a pornographic video about a woman who finds a couple having sex on her couch,’ said Meyers on Late Night with Seth Meyers.

‘It’s the second-most embarrassing thing Cruz has been caught liking.’

And on The Tonight Show Starring Jimmy Fallon, the host said: ‘Last night on Twitter, Ted Cruz’s official account liked a pornographic video.  The next time Cruz tries to reach across the aisle, the other senators will be like, ‘No, thank you. That’s good. We’re good.”

He closed out by stating: ‘That’s right, Cruz liked a a pornographic video. Some are wondering if he’s going to hire a PR team to beat the scandal, but Cruz says he plans to beat it alone.’

The only network host who did not weigh in was Stephen Colbert as he was in Los Angeles preparing to host the Emmy Awards this weekend and airing repeats. 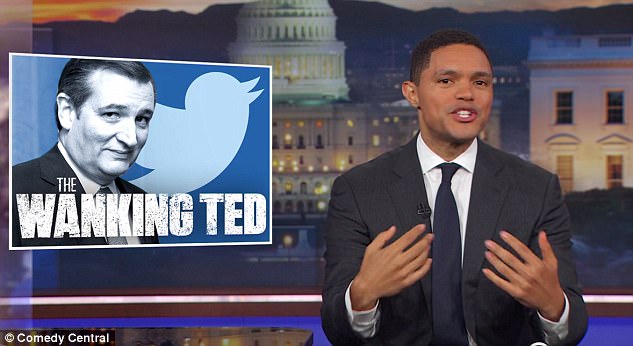 The Daily Show also got in on the action, joking: ‘Only Ted Cruz would seraph for pornography by typing in “sexual posts.”‘

‘What else does he search? Uncovered swimsuit areas? Reproduction showing the outside parts?’ asked Noah.

He went on to joke that Cruz ‘probably just gets off by hearing the doorbell ring,;’ before simulating the face some make while having an orgasm.

Noah then took time to dismiss the outcry over the incident.

Noah then joked ‘we know you got hacked.’