The Lib Dems were riding high on 23 per cent in a YouGov poll at the start of October but the party has been sinking ever since with the latest survey giving it a support rating of just 15 per cent.

Ms Swinson attempted to get her party back on track this afternoon as she unveiled her 100-page blueprint for Britain.

Cancelling the UK’s departure from the European Union forms the centre-piece of the party’s December 12 offer to voters as it seeks to win over people who backed Remain at the 2016 Brexit referendum.

Ms Swinson is committing to spending a £50 billion so-called ‘Remain Bonus’ on boosting public services if the party succeeds in stopping Brexit.

Jo Swinson, pictured visiting a school in Cambridge this morning, is launching her party’s election manifesto today as she tries to stop the Lib Dems’ slide in the polls 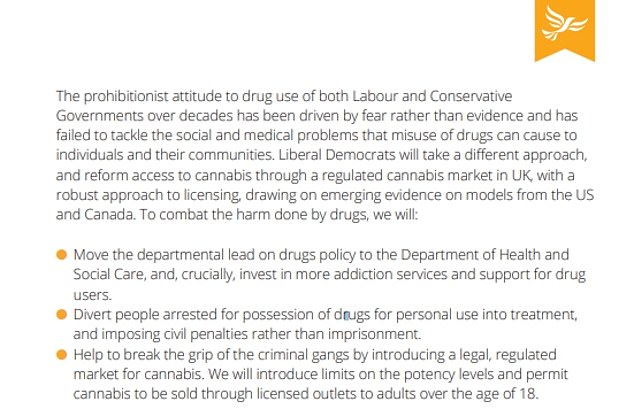 Give every adult £10,000 to spend on training and skills over the course of their lives

The Lib Dems argue that staying in the EU would enable the UK economy to grow faster than it would under Brexit, leading to more money being available to the government to spend on its priorities.

Last night Ms Swinson said that if the Lib Dems win the election and she becomes prime minister she would revoke Article 50 on ‘day one’ as she also suggested the decision to scrap Brexit could be communicated to Brussels ‘by email’.

Aside from Brexit, arguably the party’s most eye-catching policy pledge is to legalise cannabis and to introduce a licencing system which would allow the drug to be sold over the counter to over-18s.

The party said in its manifesto that introducing a ‘legal, regulated market for cannabis’ would ‘help to break the grip’ of criminal gangs.

The document said: ‘We will introduce limits on the potency levels and permit cannabis to be sold through licensed outlets to adults over the age of 18.’

The Lib Dems claim that the ‘prohibitionist attitude to drug use’ from successive Labour and Tory governments ‘has been driven by fear rather than evidence’.

The party’s cannabis plan would be informed by legalisation models implemented in Canada and some states in the US.

The manifesto also commits to ‘divert people arrested for possession of drugs for personal use into treatment’ rather than sending them to prison.

Back on Brexit, Ms Swinson said ahead of the manifesto launch: ‘This manifesto is a bold plan to build a brighter future for our country, and that starts with stopping Brexit.

‘Labour and the Conservatives can’t offer the country a brighter future because they both want Brexit.

‘Liberal Democrats will stop Brexit and invest in our mental health services, give free childcare to working parents, put 20,000 more teachers into classrooms and take ambitious action to tackle the climate emergency.

‘Our politics has been dominated by the two, tired old parties for too long.

‘This election provides an opportunity to change the future of our country and build a brighter future with the Liberal Democrats.’ 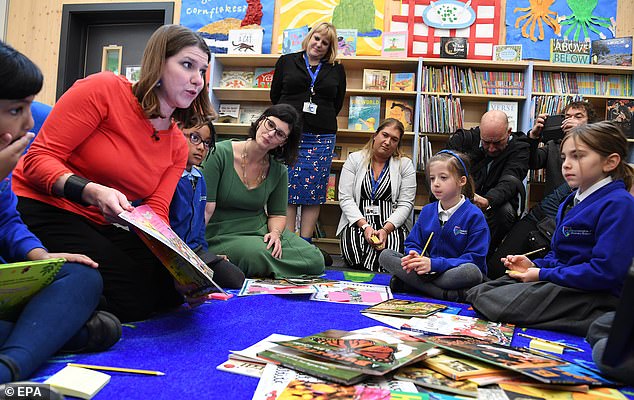 The party’s manifesto is also heavy on proposals designed to tackle climate change.

The Lib Dems are committing to hiking taxes on people who frequently take international flights while reducing costs for those who only fly once or twice per year.

The manifesto pledges to: ‘Reduce the climate impact of flying by reforming the taxation of international flights to focus on those who fly the most, while reducing costs for those who take one or two international return flights per year.’

It also proposes a ‘moratorium on the development of new runways’ in the UK and sets out opposition to expansion of existing major airports.

Meanwhile, the party said a Lib Dem government will generate 80 per cent of Britain’s electricity from renewable sources by 2030.

The manifesto also contains a promise to provide free childcare from the age of nine months, to give every adult £10,000 to spend on skills and training throughout their lives and to recruit 20,000 new teachers as part of an extra £10 billion a year investment plan for schools.

Nicola Sturgeon has condemned Jo Swinson after the Liberal Democrat leader said without hesitation that she would authorise the use of nuclear weapons.

Ms Swinson was asked the question last night and she immediately replied with a simple ‘yes’.

The swift nature of her reply prompted anger from Ms Sturgeon as the SNP leader said it was ‘sickening’ to see the use of nuclear weapons treated like ‘some kind of virility test’ for politicians.

Ms Sturgeon, the Scottish First Minister, said she would not in any circumstances authorise such a strike, with the SNP long-committed to getting rid of the UK’s nuclear arsenal.

The row between the two party leaders came as the Liberal Democrats and Ms Swinson prepared to publish their 2019 general election manifesto.

The party’s blueprint for the UK will be built around its centre-piece pledge to stop Brexit. 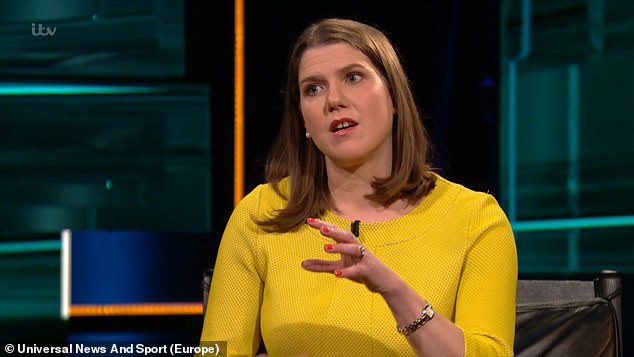 Jo Swinson, pictured during an interview on ITV last night, simply replied ‘yes’ when she was asked if she would authorise the use of nuclear weapons

The issue of whether party leaders would agree to the use of nuclear weapons has become a familiar question during election campaigns in recent years.

But Ms Sturgeon objected to Ms Swinson’s seemingly flippant response when she was asked if she would push the nuclear button if she ever became prime minister.

The SNP leader tweeted: ‘It’s sickening to hear this question asked and answered as if it’s some kind of virility test and without any context.

‘Using nuclear weapons would mean killing millions of people. Those consequences should be made clear. (FWIW – and for that reason – my answer is “no”).’

The use of nuclear weapons is politically divisive with Labour leader Jeremy Corbyn having been heavily criticised for his stance on the issue.

He was attacked recently after he signalled he would be willing to scrap the UK’s Trident nuclear deterrent.

He is a vocal and long-time opponent of nuclear weapons and he recently said the UK’s missiles ‘would be part’ of any future ‘nonproliferation treaty discussions’.

Mr Corbyn’s comments were pounced on by his critics as they suggested they showed the Labour leader could not be trusted with maintaining the UK’s national security.

MPs voted in July 2016 to renew Trident as they gave the green light to building four new replacement submarines to carry the UK’s nuclear missiles.

Labour MPs were given a free vote on the issue and the majority backed renewal but Mr Corbyn voted against maintaining Britain’s continuous at-sea nuclear deterrent.

The SNP has hinted that scrapping Trident could be a red line during any post-election talks with Labour about the prospect of propping up an administration led by Mr Corbyn.

Meanwhile, shadow foreign secretary Emily Thornberry earlier this month claimed Mr Corbyn would not have sole control of the nuclear deterrent if he becomes PM and that other people would be involved in the decision-making process.

In the past Mr Corbyn has explicitly ruled out deploying nuclear weapons, even if the UK was attacked.