Joanne Froggatt and Robert Glenister lead a smashing cast in the light and entertaining Alys, Always

Frances works at a Sunday newspaper as a dogsbody sub-editor who gets the coffees. She’s played by Joanne Froggatt, the lady’s-maid Anna Bates from Downton Abbey. And she’s still a servant in this role – skivvying for the books editor.

Then one day she finds herself at the scene of a car crash, tending to a dying woman. The widower – Britain’s top novelist – invites her to meet his grateful family. Frances sees her chance.

She makes up the woman’s last, comforting words. She befriends the scatty daughter. She wangles the first interview with the grieving novelist and gets him to blub. Scoop! Frances’s mousey life is looking up. 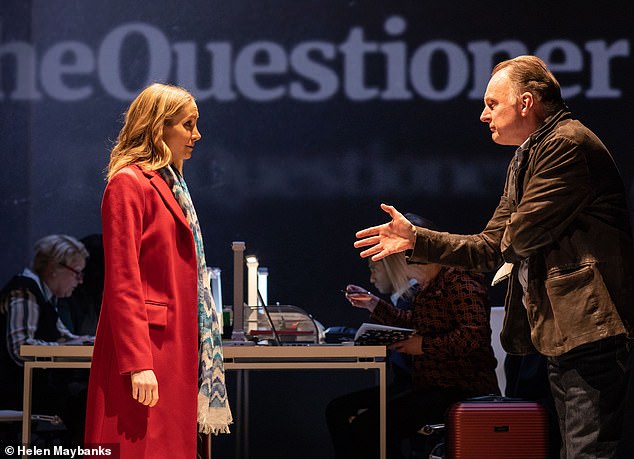 Frances (Joanne Froggatt) finds herself at the scene of a car crash, tending to a dying woman. The widower – Britain’s top novelist (Robert Glenister) – invites her to meet his grateful family

Fans of Harriet Lane’s incisive novel will recognise its twin accomplishments in Lucinda Coxon’s adaptation – as a satire of London literary folk and as a psychological thriller. 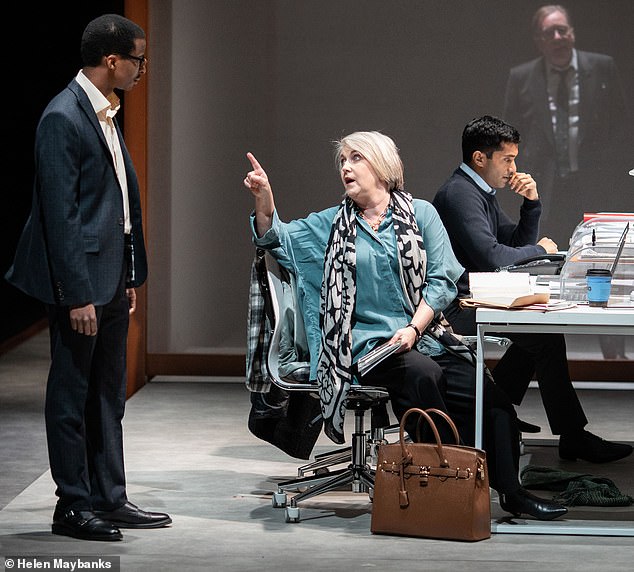 It’s light, crisp entertainment that unfurls most satisfyingly. All things come to those who watch and wait – and, as the snake in the grass, Froggatt’s Frances is all the better for being so terribly sweet and nice.

This is set in an Italian sound studio in the Seventies. A nerdy English engineer called Gilderoy (Tom Brooke, the soldier-turned-sniper in Bodyguard) has gone to Rome to do the sound on a horror flick about priests torturing witches.

He twists celery to reproduce snapping necks, and skulls of melon are smashed with an axe.

Two sound-effects men, both called Massimo, perpetrate further fruit-and-veg abuse. The film’s violence against women evokes in Gilderoy happier thoughts of his dear old mum back in Dorking. But hell surely awaits him.

Peter Strickland’s scary, baffling 2012 film forms the basis of this wittier adaptation by Joel Horwood, directed by Tom Scutt. The tale is enlivened by a fine cast of short-tempered Italians.

Notably Lara Rossi and Beatrice Scirocchi – who scream to order in the sound booth – and the studio’s sexist manager (Enzo Cilenti) and the preposterous, preening director (Luke Pasqualino).

Is this the best depiction of an English butler since Jeeves? Kazuo Ishiguro’s Booker-prize-winning 1989 novel depicts a gentleman’s gentleman of unswerving fealty to his deluded master, a Nazi appeaser.

Scenes of pre-war days are told in flashback, as Stevens seeks out the former housekeeper – now unhappily married – with whom he had an almost-romance over evening cocoa.

Discretion oozes from Stephen Boxer’s ramrod performance as the permafrosted manservant who leaves his dying father alone upstairs rather than abandon his post. Niamh Cusack, with a wonderfully open face, is the housekeeper Kenton whose overtures he rejected. 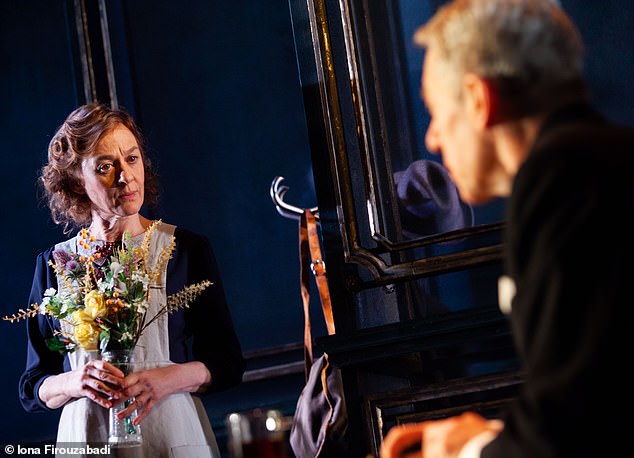 An unhappily married Kenton (Niamh Cusack), with a wonderfully open face, is the housekeeper whose overtures the butler rejected

In the film version, Anthony Hopkins and Emma Thompson made their scenes together quiver more. But Barney Norris’s adaptation – self-effacingly directed by Christopher Haydon – makes this a sharper critique of the price of servitude.

There’s a brilliant Brief Encounter-ish scene of emotional desolation over some cucumber sandwiches. A really pleasurable return to a terrific book.

Shakespeare’s pastoral frolic is primarily about romantic love – but the most compelling relationship in Kimberley Sykes’s playful production is a friendship.

Lucy Phelps and Sophie Khan Levy ooze chemistry as, respectively, witty heroine Rosalind and her best pal and cousin Celia. Phelps shines as the lead, and it’s unquestionably her show, yet some wonderful comedy comes from her character’s banter with Khan’s stroppy Celia: a scene in which she boredly flicks through a programme (purloined from an audience member) while Rosalind moons over love interest Orlando is one of the show’s best. 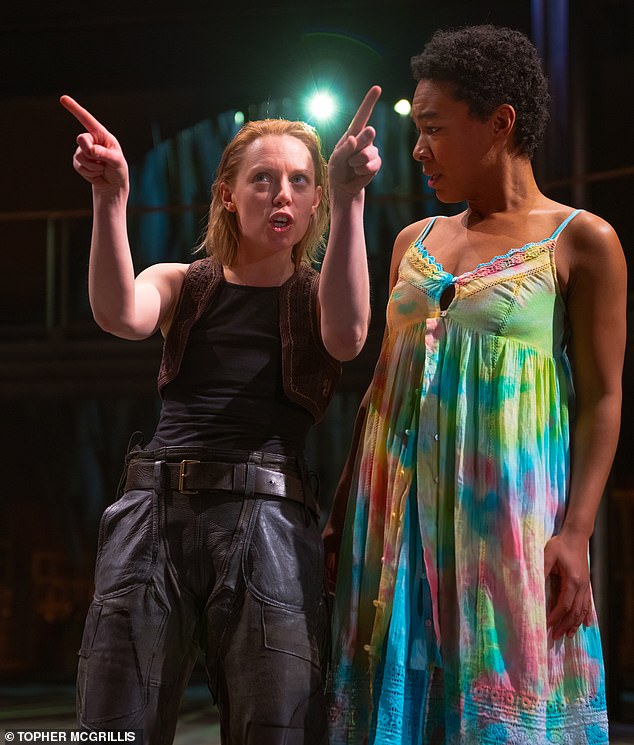 It’s a strong cast. David Ajao exudes relaxed charm as Orlando, while Sophie Stanton’s matter-of-fact delivery as a gender-swapped Jacques puts a new spin on some of the Bard’s best-known lines.

The design doesn’t quite live up to the performances. The Forest of Arden is festooned with outlandishly apparelled figures but there’s not much in the way of, well, trees. 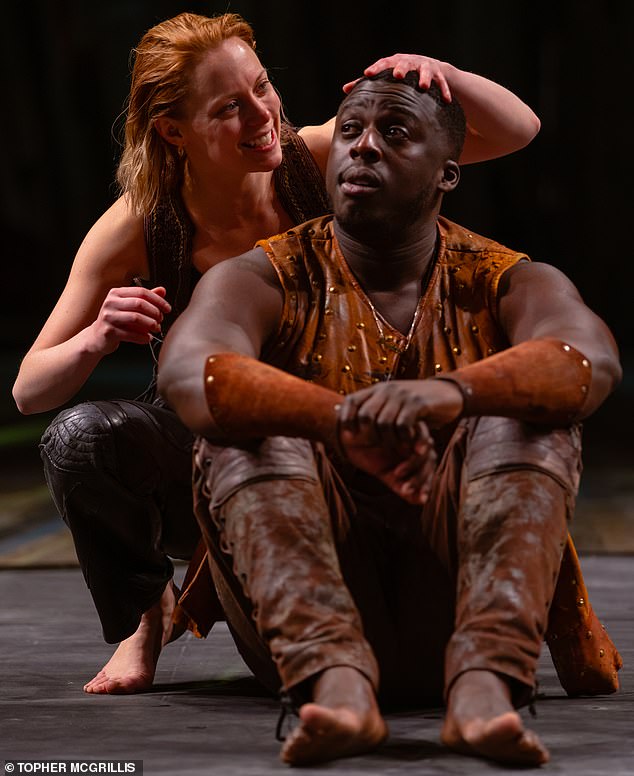 Shakespeare’s pastoral frolic is primarily about romantic love and it captures the vertiginous joy of falling in love. David Ajao exudes relaxed charm as Orlando (above with Phelps)

A leafy visual spectacular graces the finale but it seems a shame to ignore the forest’s sylvan magic until the final ten minutes.

Nevertheless, it captures the vertiginous joy of falling in love – and, thanks to a game approach to audience participation, adheres to Shakespeare’s pronouncement that ‘all the world’s a stage’.

This Canadian musical lands in London already festooned with Tony nominations and glowing reviews from a spell on Broadway. And no wonder: it’s a feelgood treat, warming and wholesome as a cup of cocoa on a cold, dark night.

Husband-and-wife team Irene Sankoff and David Hein economically tell a poignant but heartening 9/11 story: how 38 planes unexpectedly landed in the tiny town of Gander, Newfoundland, depositing more than 7,000 anxious passengers, and how the 9,000 local citizens opened their hearts and homes to them.

Reflecting the Irish heritage of Newfoundland, the music is folksy, with a whole lot of pipe, fiddle and (occasionally corny) footstomping. 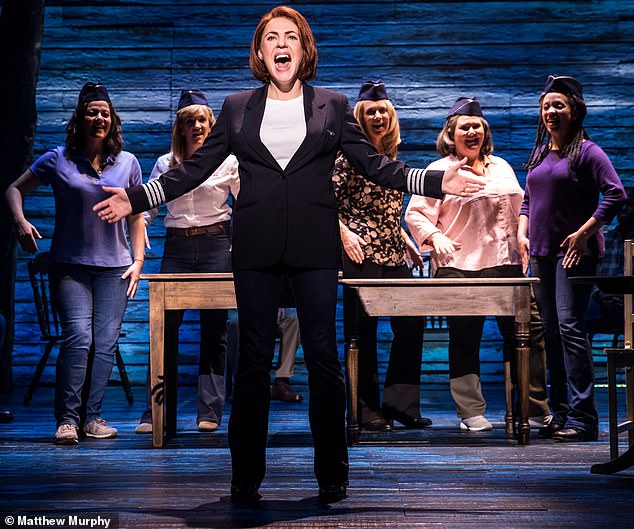 Rachel Tucker plays pilot Beverley Bass, who was the first female captain of an American Airlines aircraft. Come From Away is a homespun hymn in praise of community and tolerance

It can all be a little too earnest at times but it’s saved by a gentle humour and wisely eschews any overblown sentimentality.

The cast nimbly play multiple roles, both as guileless locals and the cranky, cynical ‘Plane People’, who are soon softened, and in cases transformed, by their hosts’ generosity. There are some astonishing individual stories.

Come From Away is a homespun hymn in praise of community and tolerance. It proves more uplifting than a jumbo jet.