Abusive men are becoming something of a recurring theme for Joanne Froggatt. As lady’s maid Anna Bates in Downton Abbey she was attacked by Lord Gillingham’s valet, and in the hit thriller Liar her character Laura Neilson was date-raped then stalked by Ioan Gruffudd’s sinister surgeon Andrew Earlham. The theme continues when she returns to TV this week in a tense new thriller from Jack and Harry Williams, the co-writing brothers behind Liar and The Missing, as the victim of an abusive husband.

Joanne takes the title role in Angela Black, playing a former concert pianist who decides to fight back after suffering violence at the hands of her property developer husband Olivier (Game Of Thrones’ Michiel Huisman). In the opening scene of the six-part drama, Angela embarrasses Olivier during post-dinner drinks with friends at their luxury detached home in London. Humiliated, Olivier lashes out at his wife later when they’re alone.

Joanne (pictured centre) takes the title role in Angela Black, playing a former concert pianist who decides to fight back after suffering violence at the hands of her property developer husband Olivier

Viewers don’t see the attack, but will be left in no doubt about its severity when Angela appears the following morning bearing nasty injuries to her lips and eyes. But at the dogs’ home where she’s a volunteer, she tells a colleague that her son Sam accidentally opened a door in her face. ‘She’s on the brink of leaving this abusive relationship when we first meet her, but she isn’t sure how she can navigate it in a way that’s safe for her and her two sons,’ explains Joanne. ‘And it’s then that she meets Ed…’

To research her role in Angela Black, Joanne turned to two showbusiness survivors of domestic abuse. ‘I read Melanie B’s book Brutally Honest, which is an extremely courageous and intimate account of what she endured at the hands of her ex-husband Stephen Belafonte,’ she says. ‘And I also read Katie Piper’s book Beautiful, which detailed the abuse and subsequent acid attack she suffered after a brief relationship.’

Another source of material was Mandy Thomas’s book You Can’t Run, about the psychology of domestic violence. Now an ambassador for the charity Women’s Aid, Mandy was the victim of 18 years of abuse at the hands of her former partner. ‘Her book was incredibly moving and affecting – one of the most harrowing accounts of domestic violence you could ever read,’ says Joanne.

Angela is enjoying a quiet drink in a riverside pub when she has what appears to be a chance encounter with private investigator Ed (Samuel Adewunmi). When he promises to reveal previously hidden truths about her husband and help her to fight back against the man who has exerted years of coercive control over her, we’re set for a Hitchcock-style thriller full of twists and turns in which Angela gradually rediscovers her strength and confidence.

But the sickening reality of domestic abuse remains a central theme. ‘Which is one of the reasons I hope the series makes a real impact on those watching,’ says Joanne. ‘We’re not saving lives here, it’s a television drama, a piece of entertainment, but to open up this subject matter to a wider audience can be helpful when it’s done in the right way.

‘I’ve tackled a few sensitive subjects in my career and I feel that drama and entertainment can be a window into an issue the viewers may never have thought about, or which may never have been on their radar. So even if just one person watches Angela Black and thinks, “I’m going to just check in with my friend and make sure he or she’s OK” or, “Maybe I should speak to somebody about my situation” then the drama will have helped.’

Yorkshire-born Joanne, 41, says she relishes taking on roles such as Angela and Liar’s Laura. ‘These are the parts that offer the chance to show great emotional range, to really get into the psychology of a character. And they’re also the ones that stay longest in people’s memories because they’re the most affecting. I don’t seek them out but I do find I can’t say no when they come my way.’ She wouldn’t want a constant diet of them though. ‘Physically, emotionally, you need a break after you’ve played a character like this. One a year is good for me!’

Michiel Huisman, the 40-year-old Dutch actor best known as Game Of Thrones’ Daario Naharis and seen most recently as the dead lover of Kaley Cuoco’s Cassie in The Flight Attendant, is well aware viewers are going to hate his character. Dashingly handsome and with a successful career, Olivier is a master manipulator who hides his violent side and harbours a deeply unpleasant cocktail of traits including searing jealousy and rampant insecurity. 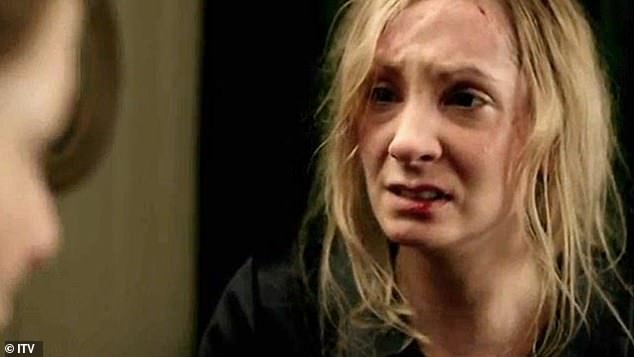 Abusive men are becoming something of a recurring theme for Joanne. As lady’s maid Anna Bates (pictured) in Downton Abbey she was attacked by Lord Gillingham’s valet 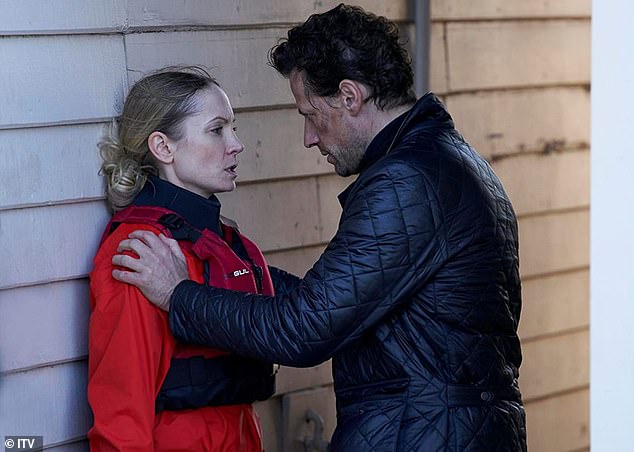 ‘I tried to at least understand why this guy would do what he does and where his anger comes from,’ says Michiel, who’s married to Dutch actress Tara Elders. ‘I reasoned he wants complete control over his beautiful wife and two perfect sons, and starts to lash out when he feels he’s losing that control, when he feels he’s losing that picture of success.

‘Being able to understand why he lashes out helped but there were still days I was dreading, when I thought, “Oh heavens, we’re going to be doing this horrible scene today” and I knew it was going to be a challenge. But at the end of the day it’s make believe, and you have to leave the part by the door. My wife wouldn’t accept it any other way.’

My scenes with a gentle giant

Joanne found a more placid partner than her violent screen husband while filming Angela Black in the shape of Hunter, the German shepherd-husky cross that plays Jackie, one of the dogs at the rescue centre where Angela works. Joanna reveals Hunter refused to reshoot one scene when he thought he might have hurt her in an earlier take.

‘He just wouldn’t repeat a scene in which he was supposed to bite Angela’s arm,’ she recalls. ‘Although I had a protective cuff on, he obviously thought he’d hurt me because that’s the way Angela reacts, and he didn’t want to hurt me again. It was very sweet, but actually a bit too sweet. This dog was almost as big as me and could have been seriously intimidating had he not been so placid – he was just too lovely to play the part of a vicious dog.’

The intensity of the drama was a challenge for both the lead actors. Joanne, who divorced her IT consultant husband James Cannon in 2020 after eight years of marriage, is on screen for more than 80 per cent of the time and was needed for all but two days of the drama’s 14-week shoot in London and the Home Counties. Even for the central character in a TV drama, that’s an awful lot of filming time.

‘It was all-consuming,’ she says. ‘I really had to throw myself into the job and make it my priority. And of course I took it home with me because I’m passionate about my work and want to make it the best I can. The biggest challenges were the emotional scenes. There were times when I felt apprehensive before filming them, questioning whether I could get into the right headspace to do them properly.’

She says the bond she formed with Michiel was a big help. ‘We took the time to really get to know each other before and during filming, so that we felt comfortable shooting those emotionally intimate moments,’ she explains.

‘Although I always knew when Joanne needed to be left alone,’ says Michiel. ‘When she put her headphones on that was a very clear message to me – and to everybody else in the production – that she wanted some private time.’

‘It was me “in the zone”,’ laughs Joanne. ‘Playing music – nothing specific, just nothing that was going to make me sad –was my way of focusing, of avoiding the banter on set and all the joking that goes on.’ 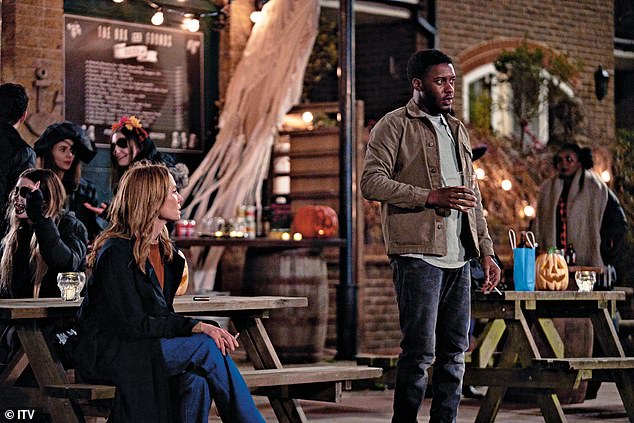 Angela meeting Ed at the pub, pictured. The intensity of the drama was a challenge for both the lead actors

Nobody was keener on that banter than Michiel. ‘I shared scenes with Samuel Adewunmi and there just happened to be a rather fine sound system in Ed’s car,’ he recalls. ‘So we’d sit there listening to some great music and every now and then the director would bother us with a take. I’d say to him, “Hey dude, we’re listening to some brilliant music here. Do you really need us, can you not wait a bit?”’

Michiel knows that viewers will be rooting for Angela and probably hoping Olivier meets a sticky end. ‘I think they’ll want to see her break free from her husband,’ he smiles. ‘And they may not be disappointed in that regard. If there’s a message from the series, it’s don’t mess with Angela Black!’