Jodie Foster steps out after a pamper day in Los Angeles

Jodie Foster cut a casual figure as she stepped out in Los Angeles after getting her nails done on Wednesday.

The Silence of the Lambs actress, 58, looked relaxed as she wore a graphic blue T-shirt and black jeans after her beauty treatments.

Keeping this casual for her pamper session, the star wore a black and white gingham face mask and framed her face with circular shaped sunglasses.

Chilled: Jodie Foster, 58, cut a casual figure in a blue graphic T-shirt and black jeans as she stepped out in Los Angeles after getting her nails done on Wednesday

Jodie looked chilled as she wore comfy black sandals, which showed her freshly painted toes, and carried her belongings in a black shoulder bag.

Her brunette mid-length locks were parted to the side as they blew in the Californian summer breeze.

The Hollywood star’s outing is a long way from her recent glamorous attendance at the 74th Annual Cannes Film Festival, where she received an honorary Palme D’Or.

More than 40 years after making her debut at the festival, Jodie received the lifetime achievement award from the festival, the highest honour at the event. 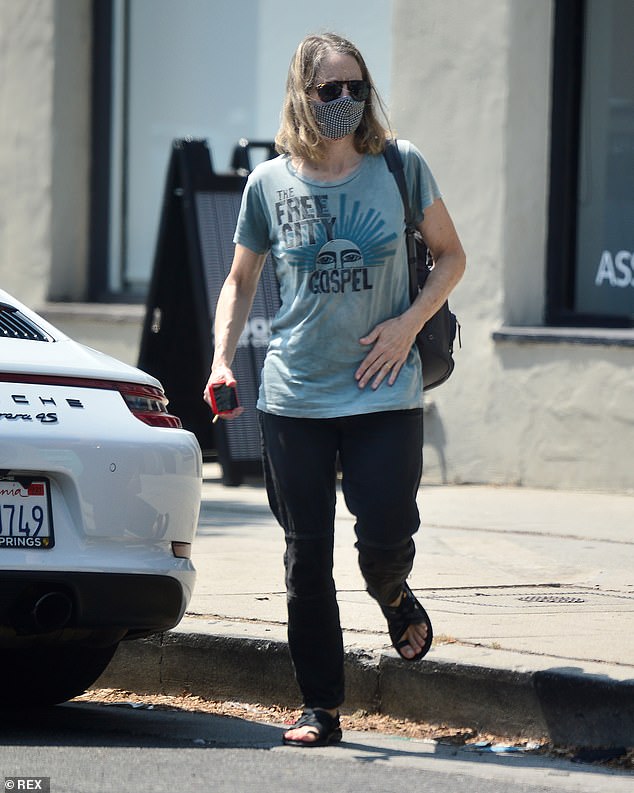 Stepping out: The Silence of the Lambs actress looked relaxed wore a black and white gingham face mask and comfy black sandals

Jodie was just 13 years old when she made her debut at the Palais Croisette in 1976 for the critically-acclaimed film Taxi Driver, which won the Palme d’Or.

Speaking previously, Jodie said: ‘Cannes is a festival to which I owe so much, it has completely changed my life. Although I had already directed before, my first time on the Croisette was a defining moment for me.

‘Showcasing one of my films here has always been a dream of mine. In fact, I have had several opportunities to fulfil my dream. Cannes is a film festival by auteur-filmakers who honour artists. And I greatly appreciate that.

‘I am flattered that Cannes thought of me and I am very honoured to be able to share a few words of wisdom or tell an adventure or two with a new generation of filmmakers.’ 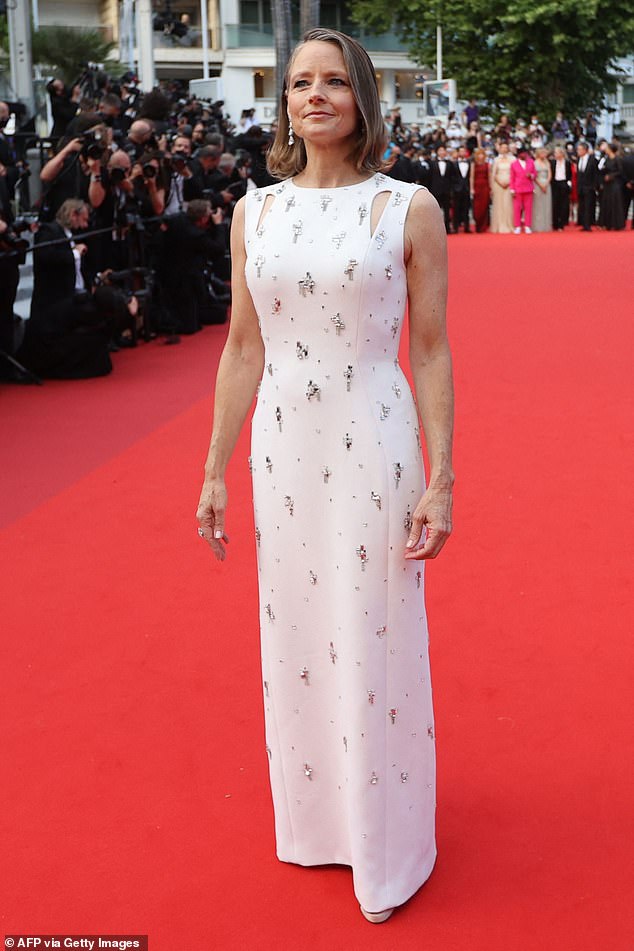 Wow: The star’s casual outing is a long way from her recent glamorous attendance at Cannes Film Festival, where she received an honorary Palme D’Or (pictured at the Annette premiere)

Seven of Foster’s films, both as an actress as a filmmaker, have been featured at the Cannes Film Festival throughout the years.

Cannes President Pierre Lescure added: ‘Jodie has provided us with an amazing gift by coming to celebrate the return of the Festival on the Croisette.

‘Her aura is unparalleled: she embodies modernity, the radiant intelligence of independence and the need for freedom.’

In a statement, General Delegate, Thierry Frémaux said: ‘Jodie never ceases to reinvent herself. She questions with her piercing gaze, learns from others, and is willing to step back from her beliefs in order to forge new morals. Do what is fair.

‘An idea that she strives to convey in the decisions she makes as an actress and director, and which makes her so precious during our confusing times. We will honour her with warmth and admiration!’ 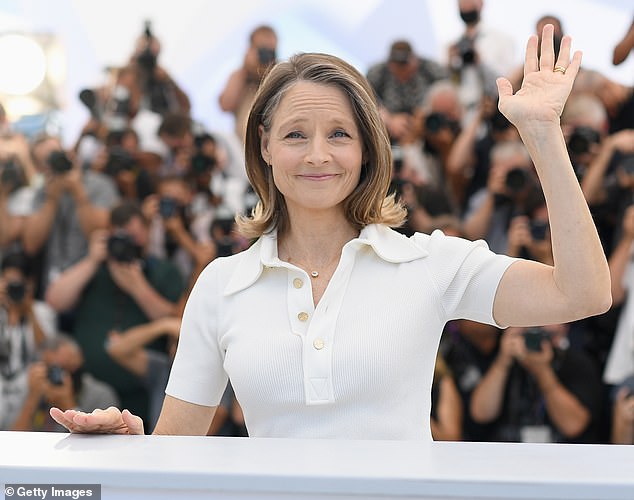 Award-winning: Speaking about the star-studded event, Jodie has previously gushed ‘Cannes is a festival to which I owe so much, it has completely changed my life’ (pictured at the event)