President Joe Biden tapped Vice President Kamala Harris to lead the administration’s efforts to stem what he called a ‘serious spike’ in immigration at the border.

The president announced his decision on Wednesday in a meeting with Health and Human Services Secretary Xavier Becerra and Department of Homeland Security Secretary Alejandro Mayorkas on the situation at the border.

Biden announced he has asked Harris ‘to lead our efforts’ with Mexico and other nations that need help in ‘stemming’ immigration.

He described her as the most qualified person for the job, pointing to her work as state attorney general of California. It is the first time Biden has put his vice president in charge of a specific issue and, in choosing the person he calls the last in the room, Biden indicated how important an issue the border has become.

‘I’ve asked her, the VP today because she’s most qualified person to do it to lead our efforts with Mexico and the northern triangle and the countries that need help in stemming the movement of so many folks stemming migration to our southern border,’ he said.

‘She’s most qualified person to do it to lead our efforts,’ he said. 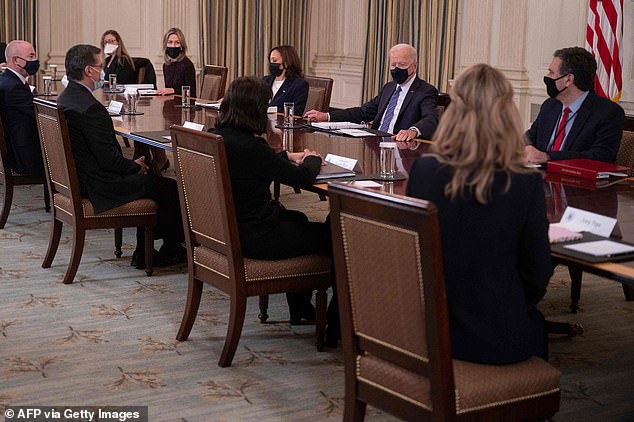 The administration has been struggling with a surge in migration at the U.S.-Mexico border but refuses to call the situation a ‘crisis’ even as photos show children being held in crowded conditions in temporary shelters.

Biden spoke of ‘serious spikes’ in people heading to southern border, saying it went back to the Trump administration.

‘What happened was we found that there were serious spike in the number of people heading to the southern border,’ he said.

‘They were coming north and we did nothing to do much about it. There’s no surge we’re dealing with now started with the last administration. It’s our responsibility to deal with it humanely and to stop what’s happening. This increase has been consequential but the vice president agreed among other things and I appreciate it,’ he said.

‘She’s leading the effort. The best thing to do is put someone when he or she speaks, they don’t have to wonder about is that where the president is. She speaks for me,’ he said of his vice president. ‘She knows what she’s doing.’

He told Harris: ‘I gave you a tough job and you’re smiling. There’s no better one to take over try to organize this.’

Harris said there is ‘no question this is a challenging situation.’

‘The work will not be easy,’ she noted. ‘But it is important work.’

She said she will work on diplomatic efforts, including with Mexico, El Salvador, Guatemala and Honduras, to help stem the tide of migrants.

Harris also spoke of the importance of combating the factors that drove the migration – such as the persistent scourge of gang violence – in the Northern Triangle countries of Guatemala, Honduras and El Salvador.

‘As the president said, there are many factors to lead these countries and while we are clear that people should not come to the border now, we also understand that we will enforce the law and that we also because we can chew gum and walk at the same time. Let’s address the root causes that cause people to make the trek,’ she said.

In handing over the matter to Harris, Biden is seeking to replicate what he experienced as Barack Obama’s vice president. Obama tapped Biden early in his first term to tackle one of the administration’s most important issues: the White House effort to draw down U.S. troops in the intractable war in Iraq. 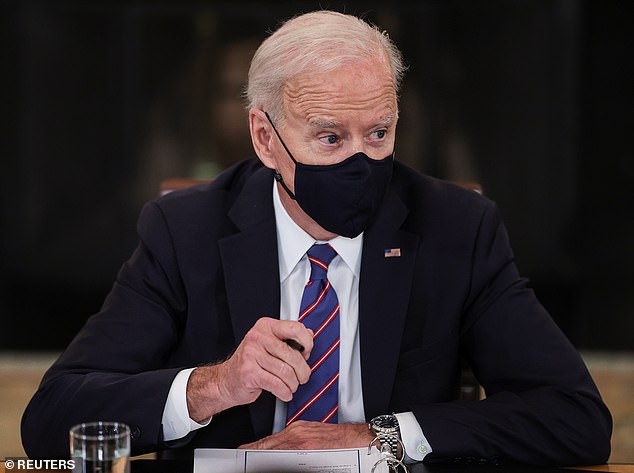 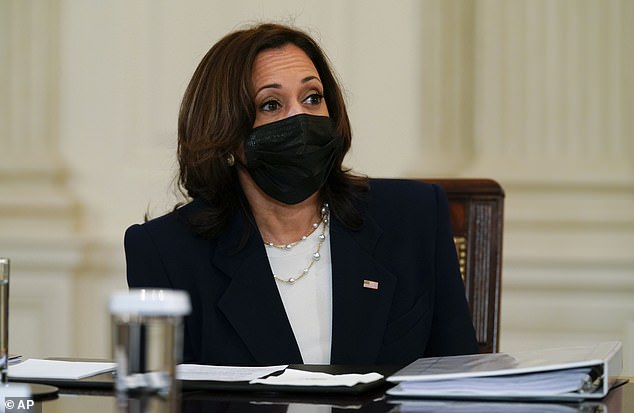 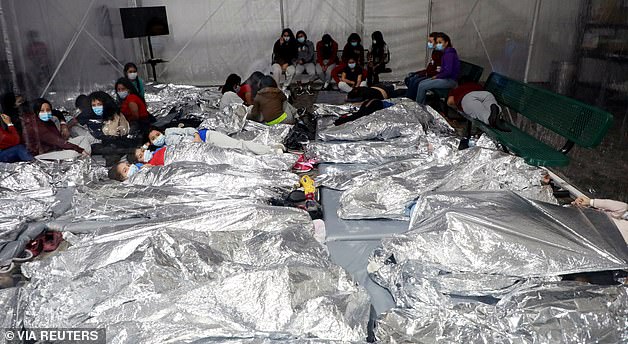 Images from the shelters show children lying packed in like sardines side by side on mattresses on the floors inside a makeshift facility in Donna, Texas

More than 16,000 migrant children are currently in U.S. custody amid a surge of border crossings. The administration is on track to open six more emergency shelters to handle the influx.

Republicans have criticized Biden’s handling of the situation, blaming his rollback of stricter Trump-era policies for the surge.

Biden has said he will visit the border at some point, which Harris echoed in an interview with CBS News on Wednesday morning.

‘At some point — absolutely we will go down to the border,’ she said.

‘There are things that we need to do, especially since there was a system in place previously, before last administration, to allow us to process these kids in their country of origin. That was dismantled. We’ve to reconstruct it. It’s not going to happen overnight,’ Harris told CBS’  ‘This Morning.’

‘We are addressing it. We’re dealing with it. But it’s going to take some time,’ she said. ‘And are we frustrated? Are you frustrated? Yes. We are.’

Harris’ new portfolio comes as a delegation of White House officials and members of Congress headed to the border on Wednesday to tour a facility in Carrizo Springs, Texas, being used to house migrant children.

More than 750 teenagers are being held at the facility, which is run by the Department of Health and Human Services.

The administration is on track to open six more emergency shelters to handle the influx. 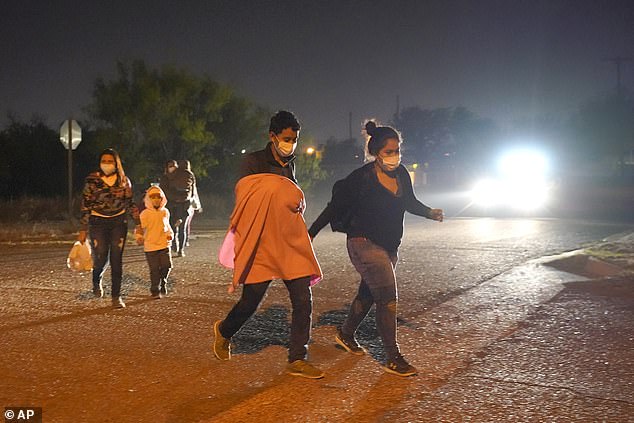 A group of migrants follows an official through a neighborhood to an intake area after turning themselves in upon crossing the U.S.-Mexico border 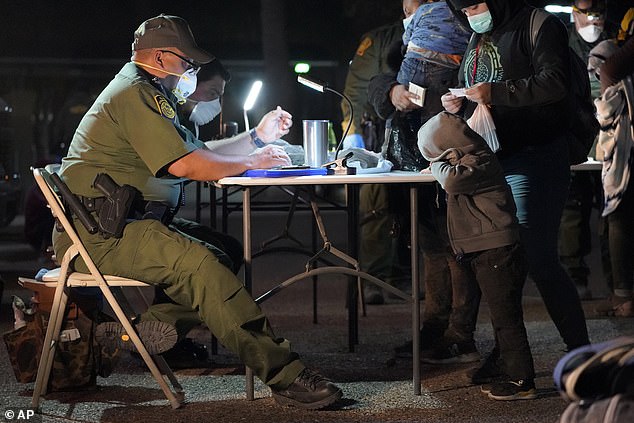 A child rests its head on a table as a U.S. Customs and Border Protection officer processes migrants after they crossed into the U.S., early Wednesday

The White House announced that one network pooled camera will be allowed inside during the tour and the footage will be shared once the tour concludes. The administration has faced criticism -from both reporters and Republicans alike – for not letting independent cameras inside the shelters.

But the press access will be to one of the shelters ran by the Department of Health and Human Services, not one of the ones being run by U.S. Customs and Border Control. It’s the UCP shelters that have had reports of crowded conditions where the HHS ones are more permanent facilities.

White House press secretary Jen Psaki was asked why the media were being sent to an ‘aspirational’ facility instead of one of the crowded shelters.

‘We’re also open to providing access there, and this is just the first step in the process of providing greater access to the media to decision,’ she said at her daily press briefing.

The children are supposed to be held from three days by border patrol and then transferred to more permanent facilities run by DHS. But the overcrowded conditions have delayed transfers with about 5,000 children estimated to be in border patrol custody.

Psaki said the administration is working on more press access.

‘Our balance is, of course, privacy as you all know. It is also that we are in the middle of a pandemic, and that you know these facilities, of course, can’t become forums for media access all day long every day. I think we all agree on that balance but we will continue to look for ways to increase transparency and provide additional access,’ she said.