President Joe Biden was seen waving to his wife Jill and one of their grandchildren on Tuesday evening, as he returned home to the White House after a day trip to Ohio – where he was met, in his first visit to a red state, by Trump supporters.

As darkness fell, the first lady could be seen on the Truman Balcony of the White House with a smaller figure and one of their two dogs, Champ and Major.

The pair waves, as Marine One’s blades slowed to a halt. Biden was seen looking up and waving enthusiastically back.

Biden looks up to the Truman Balcony, where his wife and grandchild awaited on Tuesday night 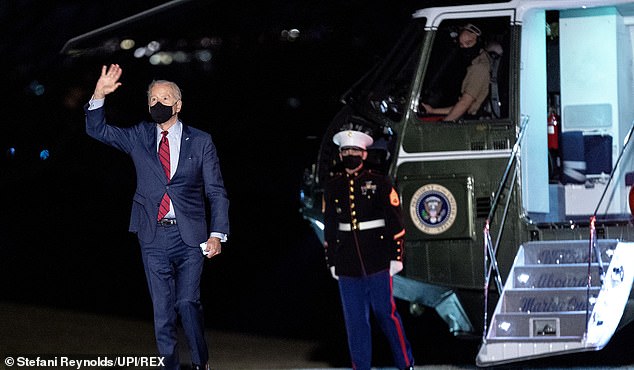 The president had traveled to Ohio on Tuesday afternoon to mark the 11th anniversary of the Affordable Care Act and sell his COVID relief plan.

It was his first foray into a red state to pitch his $1.9 trillion America Rescue Plan, which includes provisions to help pay for the healthcare subsidies.

With those new provisions, red states like Alabama and Wyoming are considering expanding their programs to residents whose incomes are too high to qualify for Medicaid but too low to afford private health insurance plans.

Arriving at Columbus airport, he was met by around 20 protesters waving Trump flags. Some had Trump 2020 memorabilia, and there was at least one sign that read ‘Biden is not my president.’ 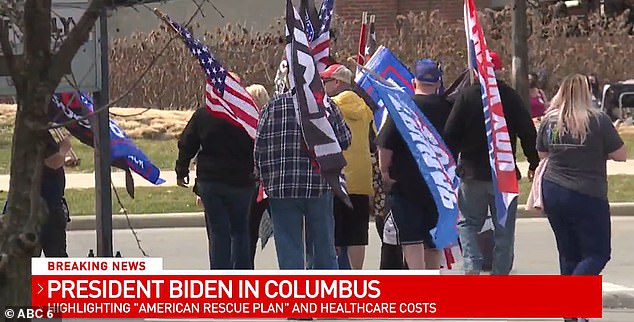 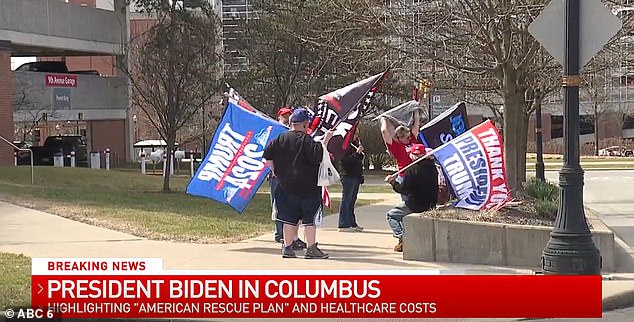 The demonstrators carried flags showing their support for the former president, Donald Trump

Biden’s visit to Ohio came as his administration is encouraging Americans to sign up for a COVID vaccine while still adhering to social distancing and wearing face masks. The president also made the trip under the shadow of another mass shooting in the United States with 10 people in Boulder, Colorado, dead after a gunman opened fire in a grocery store.

He returned to Columbus where, almost a year ago during the Democratic presidential primary, he talked about gun violence during a campaign stop. In his remarks last year, he said he would pursue background checks on all firearms purchases, ban large-capacity magazines for guns and end civil immunity for gun manufacturers in wrongful death lawsuits.

Before leaving the White House on Tuesday, Biden called for tighter gun control laws, and a reinstating of a ban on assault weapons. 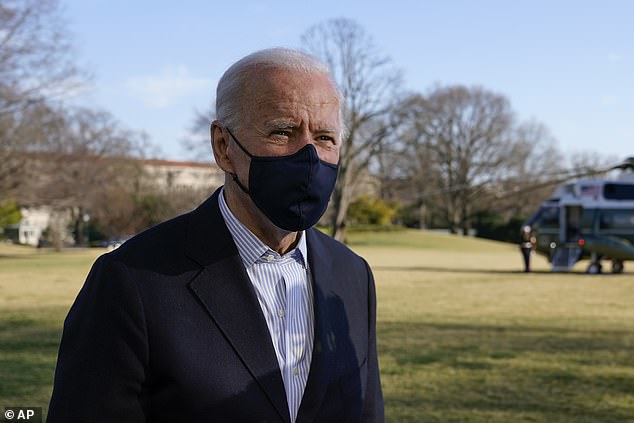 White House press secretary Jen Psaki said the Ohio trip was designed to ‘encourage Americans to sign up for insurance at HealthCare.gov during the special enrollment period his administration opened amid the pandemic.’

Biden, as vice president, was at Obama’s side at the signing ceremony where he famously called the law a ‘big f***ing deal.’

He announced at the hospital that he is extending to August 15 the deadline for Americans to sign up for coverage.

Biden said the law not only must be protected but improved, and ‘our government can fulfill its most essential purpose to care for and protect the American people.’

The president, last month, signed an executive order to open up the federal health insurance marketplace for three months so people who lost their insurance during the coronavirus pandemic can sign up for Obamacare.

More than 200,000 Americans signed on in the first two weeks of open enrollment, which, officials argue, is a sign more health care insurance access is needed. The expanded enrollment period, available via Healthcare.gov, ends on May 15. Nearly 15 million Americans without healthcare insurance are eligible for Obamacare.

The COVID-19 legislation cuts premiums paid by a hypothetical 64-year-old making $58,000 from $1,075 a month to about $413, based on Congressional Budget Office estimates, according to the Associated Press.

A 45-year-old making $19,300 would pay zero in premiums as compared with about $67 on average before the law. People who have been unemployed this year can get a standard plan for zero premium and reduced copays and deductibles. 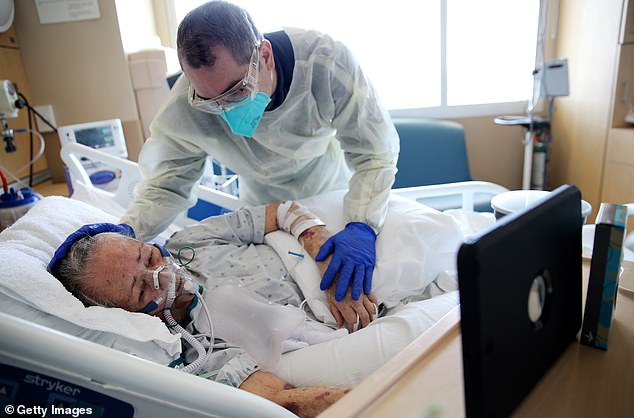 Biden will tout his America Rescue Plan, which includes provisions to help pay for insurance subsidies

Additionally, the Biden administration has argued the Supreme Court should uphold the Affordable Care Act. The Trump administration sided with state attorneys general suing to strike down the law. The justices are expected to issue their ruling in July.

The Ohio trip is part of a Biden administration battleground state blitz to tout the COVID relief plan, which the White House has dubbed the ‘Help is Here’ tour.

On Tuesday, newly-sworn in Health Secretary Xavier Becerra was in Carson City, Nevada.

Vice President Kamala Harris was in Florida on Monday while Emhoff was in Iowa.

The president pledged to expand health insurance during his presidential campaign even though didn’t go as far as to sign on to the Medicare-for-All, the universal healthcare plan touted by progressives like Bernie Sanders.

But he did vow a ‘public option’ for a government-run insurance plan that would also address the rising cost of healthcare premiums and prescription drugs. He needs Congress to make that happen.