Joe Gomez insists Liverpool will stick to Plan A vs Roma

Defender Joe Gomez insists Liverpool cannot afford to change their game-plan against Roma if they want to secure a place in the Champions League final.

Jurgen Klopp’s side take a 5-2 lead into the second leg at the Stadio Olimpico on Wednesday but the Reds will be look to extend not defend that advantage.

‘We have shown this season our best form of defence is attack so we will probably just do that again,’ said Gomez after Saturday’s disappointing goalless draw at home to Stoke, which saw Liverpool creep closer to securing a top-four finish.

‘Obviously we will be wary they have their threats and the two goals they scored will keep us on our toes and we will be defensively aware.

‘But I don’t think we can go there and afford to just sit off and try to defend the whole game because that will bring pressure and that is not the type of football we play.

‘We want to go there on the front foot and try to add to the goals.’

Roma have already produced one stunning comeback in the last round, recovering from a 4-1 first-leg deficit to knock out Barcelona on away goals and Gomez insist they have to be wary of lightning striking twice. 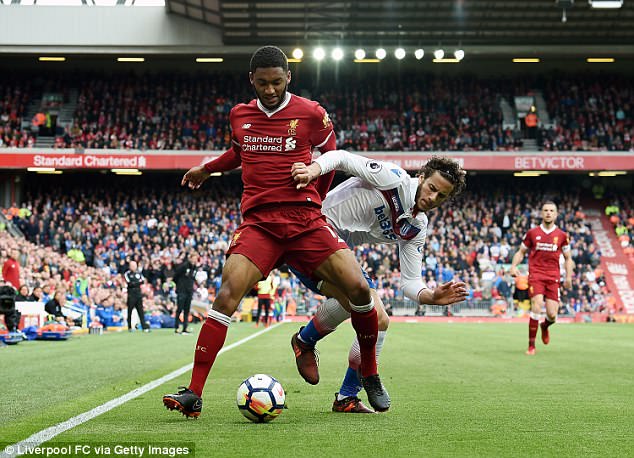 ‘That is going to give them confidence that they’ve had a comeback before and they’ve not conceded at home (in this season’s Champions League).

‘They are going to think they can’t concede so we just have to be on the front foot.’

That looming date with destiny appeared to lay heavy on the players as they laboured to a point against the relegation-threatened Potters.

The Premier League’s leading scorer Mohamed Salah for once fluffed his lines by missing – for him – a relatively easy one-on-one with Jack Butland in the sixth minute.

Although Liverpool felt they were denied a late penalty when Eric Pieters, who did an excellent job shackling the Egypt international, seemed to handle the ball, the hosts were far from the devastating form they showed against Roma four days earlier. ‘As a team we are chasing to get a top-four place and we are all frustrated as a team and our supporters are frustrated, you can hear that,’ added Gomez.

‘I think it is natural with massive games coming up and the Champions League one is the huge one on everyone’s mind.

‘But everyone focuses on one game at a time and the manager reiterates ‘This is simple and the next game is the most important one’.

‘We will try to stick together as a group and try to get through the games with the best results we can.’

Although the point did little for Stoke’s hopes of escaping the drop, it has given them a glimmer of hope as Swansea’s defeat by Chelsea means they are only three points off safety, albeit with an inferior goal difference and having played one more match than their rivals.

‘If the results go our way, next week we can probably double our capacity,’ said manager Paul Lambert.